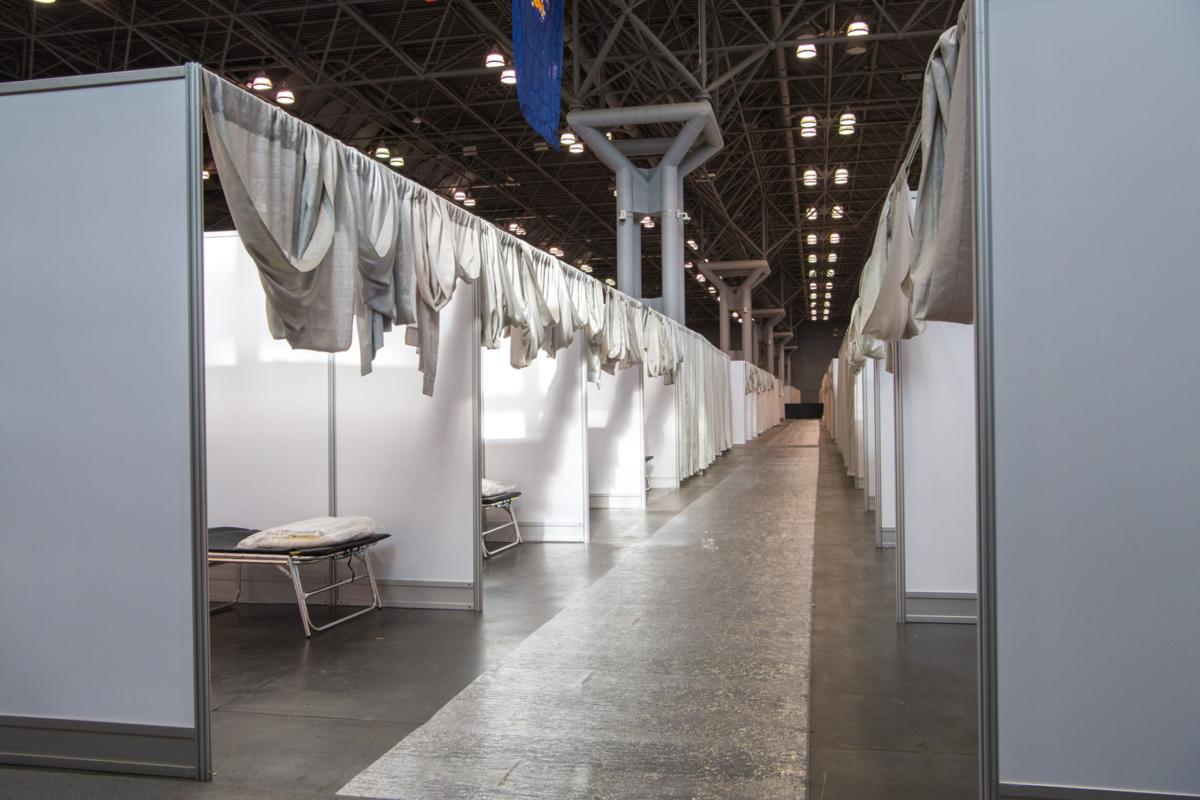 Courtesy of Gov. Andrew Cuomo’s office The first construction phase to turn the Jacob K. Javits Convention Center in Manhattan into a 1,000-bed temporary hospital facility neared completion Friday as the state’s COVID-19 threatens to hit its peak in the next three weeks. 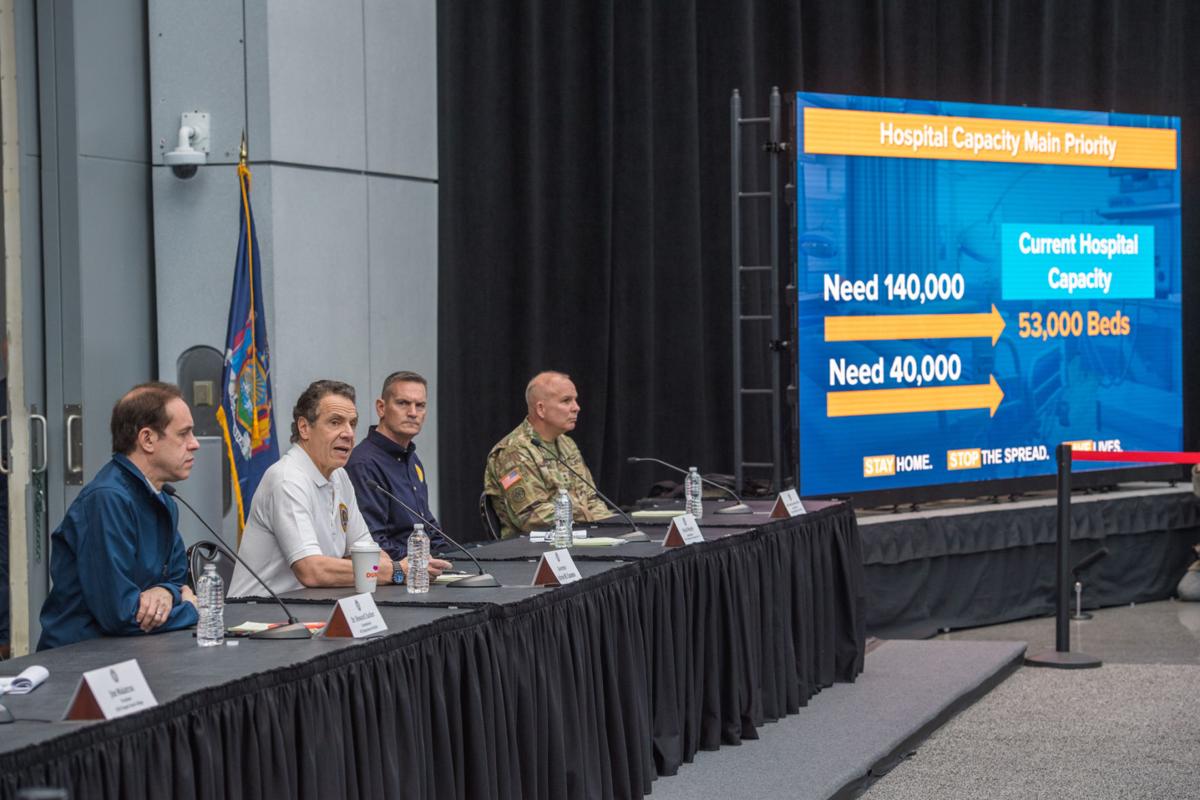 Courtesy of Gov. Andrew Cuomo’s office Gov. Andrew Cuomo speaks at the Jacob K. Javits Convention Center in Manhattan on Friday as the U.S. Army Corps of Engineers completed phase I to construct the 1,000-bed temporary hospital facility as the state’s COVID-19 threatens to hit its peak in the next three weeks.

Courtesy of Gov. Andrew Cuomo’s office The first construction phase to turn the Jacob K. Javits Convention Center in Manhattan into a 1,000-bed temporary hospital facility neared completion Friday as the state’s COVID-19 threatens to hit its peak in the next three weeks.

Courtesy of Gov. Andrew Cuomo’s office Gov. Andrew Cuomo speaks at the Jacob K. Javits Convention Center in Manhattan on Friday as the U.S. Army Corps of Engineers completed phase I to construct the 1,000-bed temporary hospital facility as the state’s COVID-19 threatens to hit its peak in the next three weeks.

NEW YORK — Schools will remain closed statewide through mid-April and the state’s first temporary hospital was completed in New York City on Friday as New York remains the nation’s epicenter for the novel coronavirus, or COVID-19.

Of the positive cases, 6,481 are hospitalized, or roughly 14.5%, with 1,583 patients in intensive care. Since the state outbreak began at the beginning of March, 2,045 patients have recovered and been discharged from the hospital.

Schools will remain closed statewide through April 15. Schools across New York were ordered closed March 18 through April 1 to be reassessed every two weeks. The state’s waiver was extended for school districts to receive state aid without holding physical classes for 180 days.

Gov. Andrew Cuomo asked President Donal Trump for approval Friday to for the U.S. Army Corps of Engineers to build four additional 1,000-bed temporary hospital facilities at The New York Expo Center in the Bronx, the Aqueduct Racetrack in Queens, at the Brooklyn Cruise Terminal and the College of Staten Island with a goal to open in early- to mid-April.

The state is also preparing college dormitories and hotels for emergency hospital beds, staffing, equipment and ventilators before the virus apex, or peak, hits New York within the next three weeks. The state needs 140,000 hospital beds, but has 53,000.

“I want to have one in every borough... so everybody knows downstate, which is where the essence of the density is right now, that everyone equally is being helped and is being protected,” Cuomo said during a press briefing at the Javits Center on Friday.

New York has 14,000 extra ventilators stockpiled throughout the state, Cuomo said, but none have been deployed because hospitals have not experienced a shortage to date.

The Center for Disease Control and Prevention and other state experts projected several weeks ago New York would need 30,000 ventilators by the pandemic’s end. Trump questioned the figure Thursday and said he does not believe the state will need that many.

For multiple days this week, Cuomo criticized federal lawmakers for passing a bipartisan $2 trillion bill to fight the pandemic he said provides insufficient aid to state governments. New York’s state government will receive about $5 billion from the federal emergency bill, Cuomo said, which can only be used for COVID-19 response efforts and does not help the state’s projected 10 to $15 billion budget shortfall.

“The federal government promised they would provide aid to state governments; they passed a bill that didn’t do that,” Cuomo said, adding New York will be forced to cut education aid — the state’s No. 1 expense.

“You can’t spend that which you don’t have,” the governor said. “When they didn’t give the states funding... all they did was cut the education budget for the state of New York, which is a tragedy.”

U.S. Rep. Antonio Delgado, D-19, voted in favor Friday of the third federal COVID-19 relief package, which contains two of the freshman congressman’s provisions including the Small Business Repayment Relief Act — which provides $17 billion in loan relief for small businesses throughout the pandemic — and $9.4 billion in disaster relief for small and mid-sized farmers.

“Coronavirus presents a challenge unlike anything our nation has seen before,” Delgado said in a statement Friday. “This legislation includes critical support for every American worker, expanded unemployment insurance, much-needed child nutrition to keep our young people from going hungry while out of school and funding to support our hospitals as well as health care and other essential workers on the frontlines of this pandemic.

“New York has become the epicenter of the COVID-19 pandemic and this legislation is by no means a panacea, but today, the House took important, bipartisan steps to support those in need.”

“During this unprecedented public health crisis, I have prioritized support for our hospitals, health care workers, small businesses and families in the North Country as we combat and ultimately beat COVID-19,” Stefanik said in a statement Friday afternoon. “I strongly advocated for this economic rescue package focused on North Country small businesses and families in need of immediate relief, and today, Congress came together to deliver that relief for the American worker. I will continue to work on a bipartisan basis to overcome this public health crisis and the economic challenges and uncertainty that have come with it.”

Cuomo also announced Friday the state will shut down all non-essential construction sites, excluding required or emergency construction, such as roads, bridges, transit facilities, utilities, hospitals or health care facilities, affordable housing and homeless shelters, according to a statement from the governor’s office.

“This is a different beast that we’re dealing with — this is an invisible beast, an insidious beast,” Cuomo said. “This is going to be weeks and weeks and weeks... So I say, my friends, that we go out there today and we kick coronavirus’ ass, that’s what I say. And we’re going to save lives and New York is going to thank you. God bless each and every one of you.”