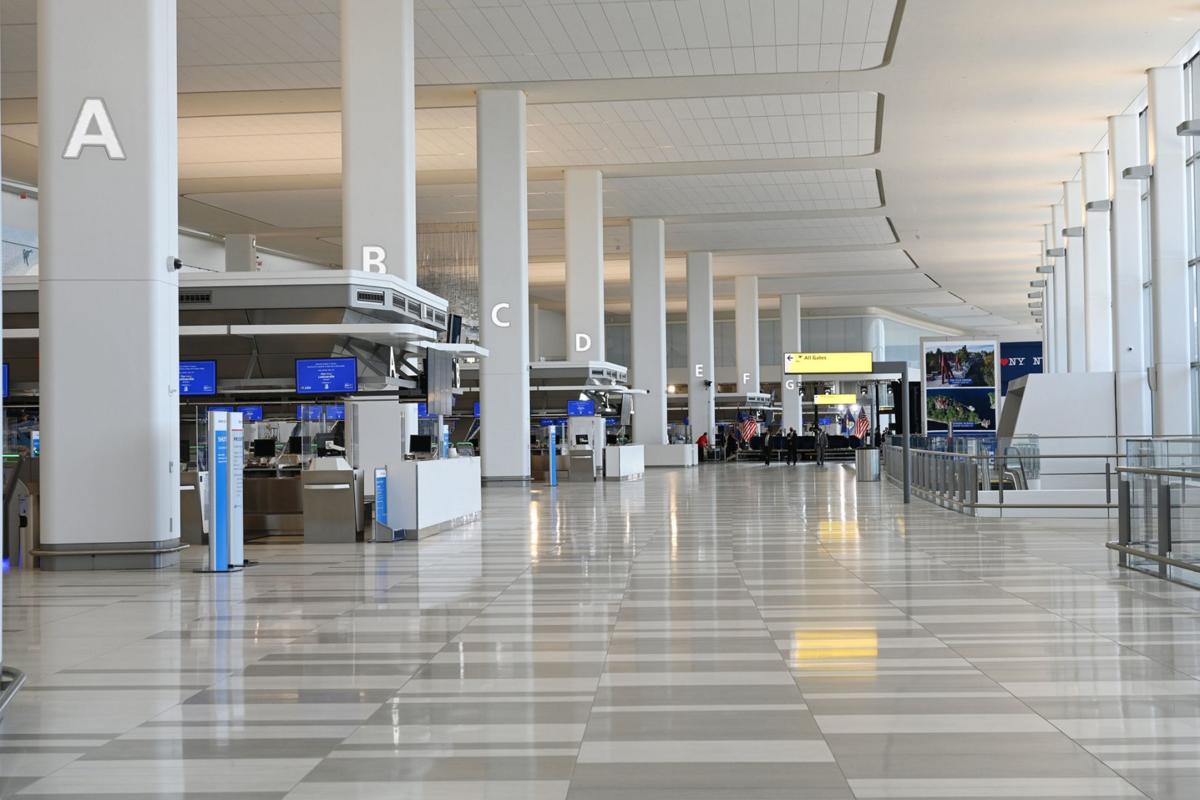 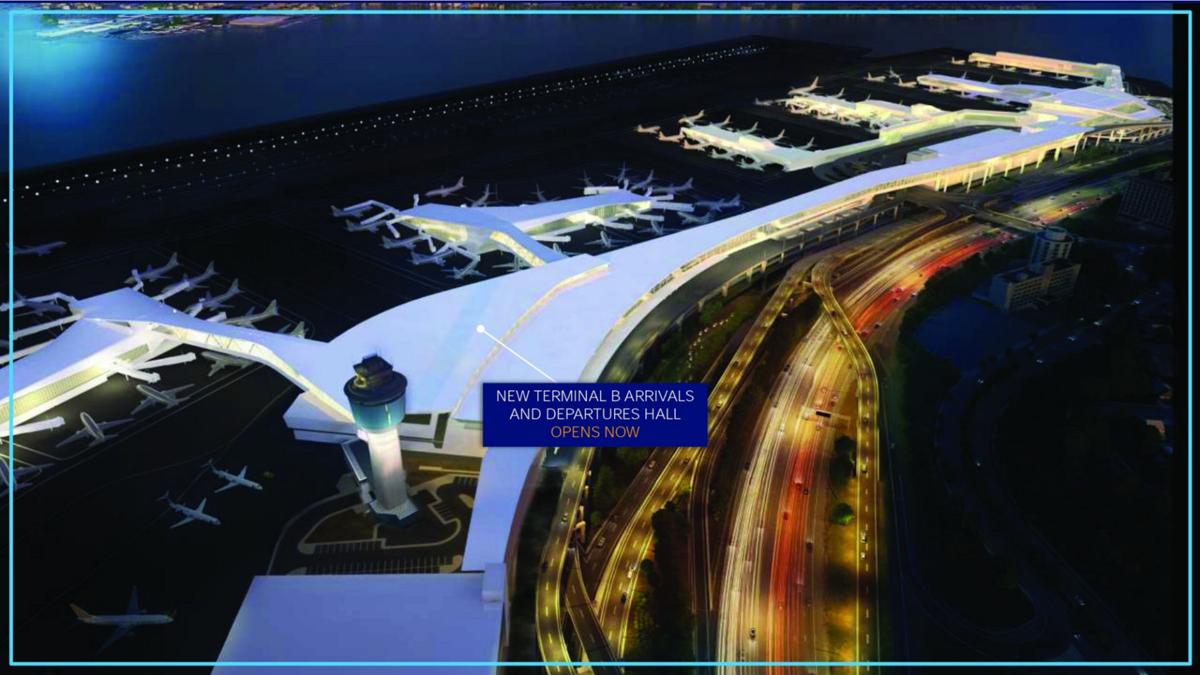 Courtesy of Gov. Andrew Cuomo’s office A photo of LaGuardia Airport’s new Terminal B Departures and Arrivals hall, which officials celebrated the early grand opening of during a coronavirus briefing at the Queens airport Wednesday afternoon. 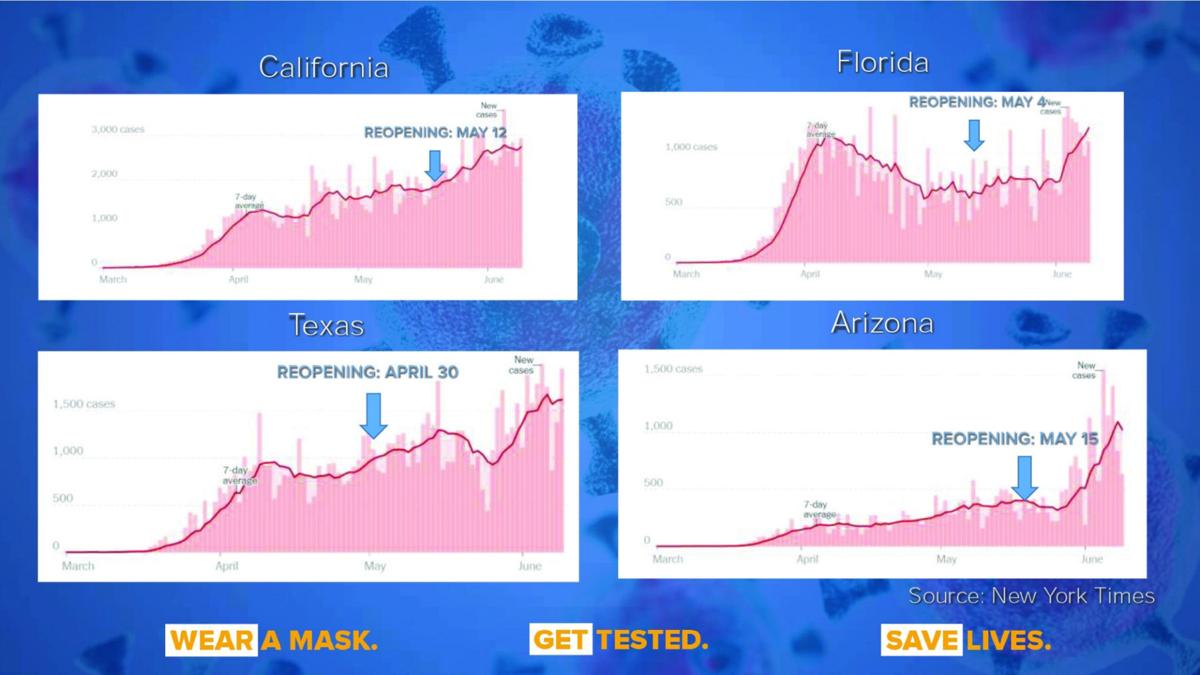 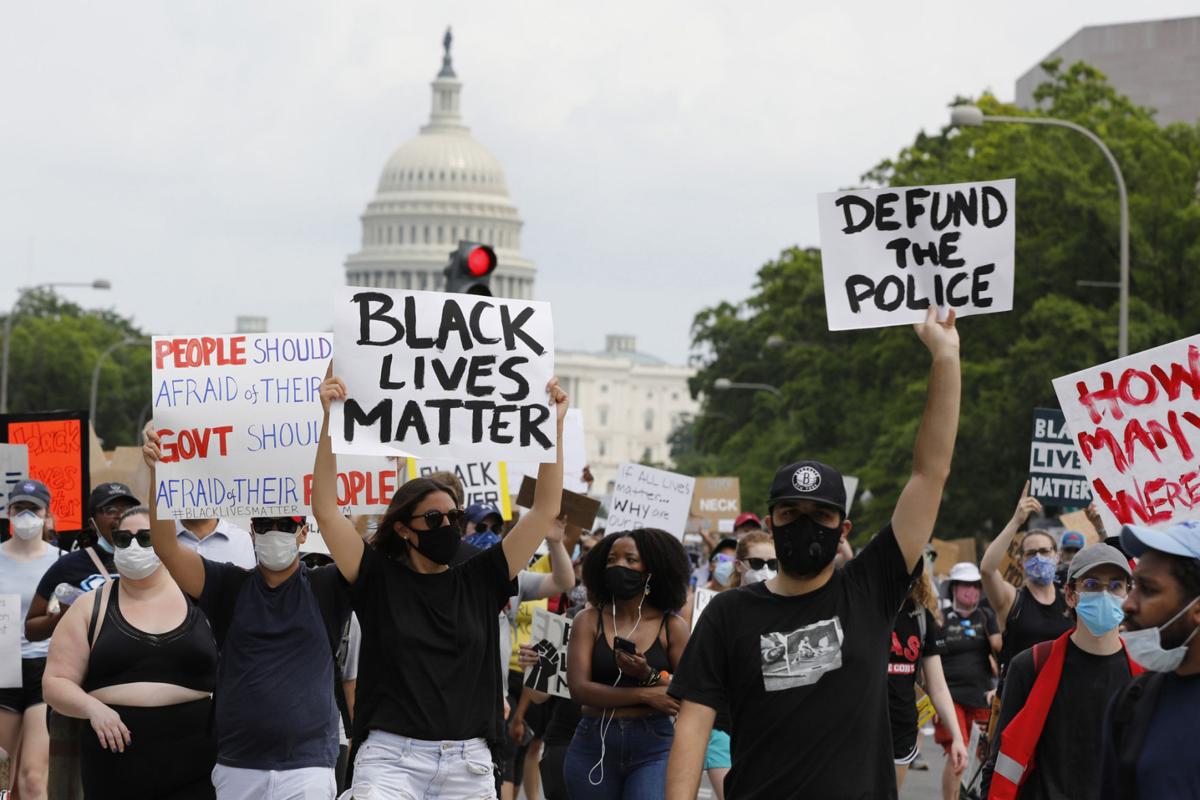 Thousands of demonstrators march from Capitol Hill during a protest against the death of George Floyd in Minneapolis police custody, in Washington, D.C., on Saturday, June 6, 2020. (Yuri Gripas/Abaca Press/TNS) 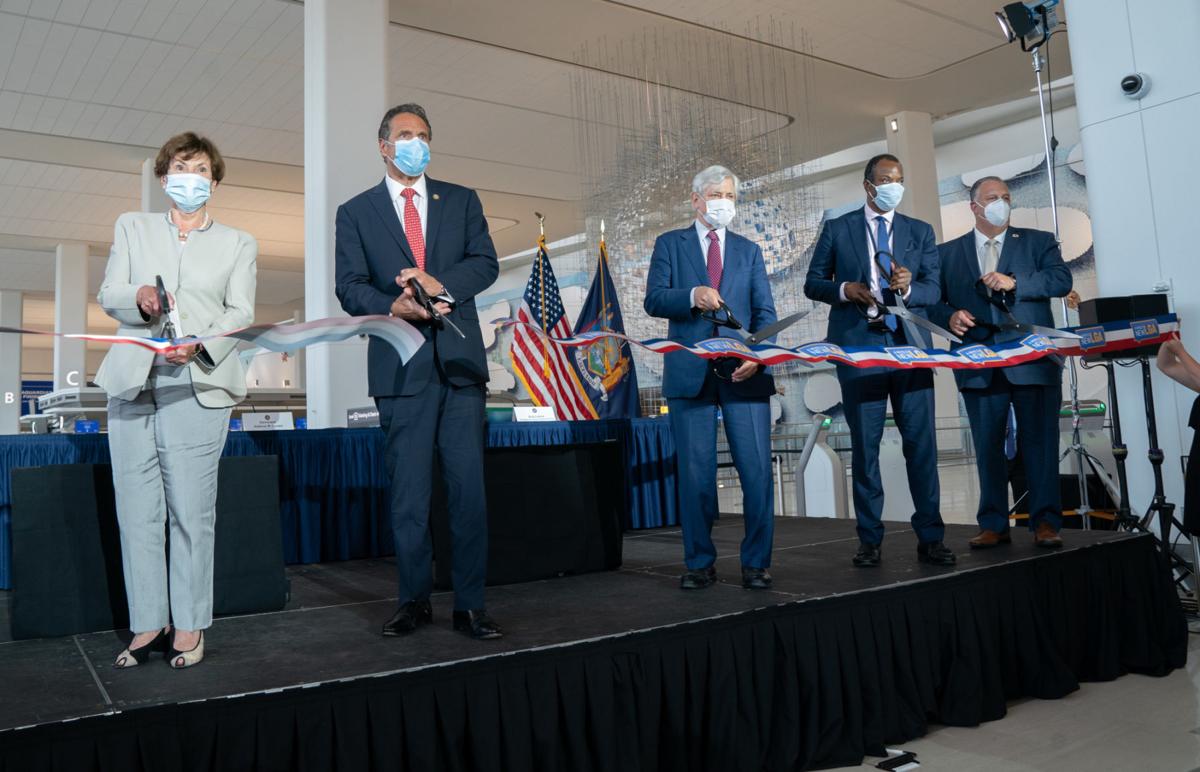 Courtesy of Gov. Andrew Cuomo's office Gov. Andrew Cuomo and other officials cut a ribbon to celebrate the grand opening of Terminal B's new Arrivals and Departures Hall at LaGuardia Airport in Queens on Wednesday.

Courtesy of Gov. Andrew Cuomo’s office A photo of LaGuardia Airport’s new Terminal B Departures and Arrivals hall, which officials celebrated the early grand opening of during a coronavirus briefing at the Queens airport Wednesday afternoon.

Thousands of demonstrators march from Capitol Hill during a protest against the death of George Floyd in Minneapolis police custody, in Washington, D.C., on Saturday, June 6, 2020. (Yuri Gripas/Abaca Press/TNS)

Courtesy of Gov. Andrew Cuomo's office Gov. Andrew Cuomo and other officials cut a ribbon to celebrate the grand opening of Terminal B's new Arrivals and Departures Hall at LaGuardia Airport in Queens on Wednesday.

Gov. Andrew Cuomo and state Democratic leaders announced their Say Their Name police reform agenda last week. The governor has repeatedly said over the past two weeks he would sign any related bills that come across his desk.

“I was talking to a friend the other day and saying that I think at this point, you or someone that you know has been affected by cancer,” Senate Majority Leader Andrea Stewart-Cousins said during a floor speech Wednesday. “Well if you are black in America, you or someone you know has had a bad interaction with law enforcement. That’s just the way it is.

“However, I do have hope,” added Stewart-Cousins, D-35. “Because here I am remarkably in this historic position at this historic time able to be part of a movement that started with the blatant and horrific murder of George Floyd. Something all of us have seen, and as a result of that, people have taken to the streets.”

Senate Bill S.8493 passed the Senate 61-1 and the Assembly 142-2 late Tuesday afternoon, establishing the pilot New York State Police Body-Worn Cameras Program. The program will provide all state police officers with body-worn cameras to be used any time an officer conducts a patrol and prescribes mandated situations when the camera is to be turned on and recording. State police troopers do not and have never worn body cameras on duty.

“Planning is underway,” according to a statement from the New York State Police public information office Wednesday. “We’ve received vendor responses to our solicitation for interest. Details about the program are still in development, and we do not yet have a cost estimate.”

“What we did is not a cure, but it is a first step towards acknowledging that while laws alone cannot fix racism in America, they can begin to root injustice out of our justice system and start us on the path to equality,” Stewart-Cousins said.

Cuomo held his daily coronavirus briefing Wednesday before a ribbon-cutting to celebrate the opening of the brand-new, state-of-the-art Terminal B Arrivals and Departures Hall at LaGuardia Airport. Crews accelerated construction to complete hall, which was completed months ahead of schedule because air travel ridership is down 95%.

The hall completion is the biggest milestone to date in the airport’s ongoing $8 billion transformation project, which includes the demolition and replacement of every terminal and concourse of the Queens airport except for the historically landmarked Marine Air Terminal.

“From the worst airport in the country to the best,” Cotton said during Wednesday’s briefing. “...from the laughingstock on ‘Saturday Night Live’ skits to a world-class airport worthy of New York.”

New York must seize the opportunity of less traffic and decreased ridership on public transportation to focus on large-scale development projects, Cuomo said, as the state continues a gradual four-phase reopening across its 10 regions. The governor has suggested significant infrastructure-improvement projects, such as renovating the crumbling cross-Hudson tunnels, expanding the 2nd Avenue Subway system or constructing a LaGuardia Airport airtrain since last month to create thousands of jobs and energize the sluggish state and national economy.

“If there’s less activity, we can build more aggressively because there’s less disruption,” Cuomo said. “Build things you know can help drive economic growth. You have an opportunity.”

As Long Island entered phase II of reopening Wednesday, the governor encouraged New Yorkers to remain vigilant in wearing face masks or coverings in public and complying with social distancing to keep COVID-19 numbers down as Texas has seen a 36% spike since Memorial Day. COVID-19 metrics, including hospitalizations and infections, continued to decline Wednesday.

“The numbers to watch now are the daily testing results,” Cuomo said of the state’s 50,000 daily diagnostic tests. “If you’re going to get into trouble, you’ll se it in the numbers. See if there’s any movement... see if we have to worry if there’s a cautionary tale or if the reopening is increasing without the viral spread.”

State officials have dismissed reporters’ questions for months about details on expected widespread 20% budget cuts to schools, hospitals and localities in the wake of the COVID-19 pandemic.

The legislation would provide emergency COVID-19 funding to state or local governments, which Cuomo has criticized federal officials for since the pandemic first ravaged New York in March.

“They must provide funding to state or local governments so we can function and not go bankrupt,” the governor said Wednesday. “If they don’t fund state and local governments, we’re going to have a terrible deficit that’s going to make the situation worse.

“All the economists will tell you you don’t get the economy back if you don’t fund the state and local government.”

The state has not issued guidance for municipalities to reopen local swimming pools this summer. The decision to open pools for the season is up to municipalities.

“We anticipate putting out guidance in the coming days,” Secretary to the Governor Melissa DeRosa said.

Attorney General Letitia James appointed former U.S. Attorney General Loretta Lynch and New York University law professor Barry Friedman as two special advisors to help guide and support her investigation into the recent interactions between the New York City Police Department and the general public after videos and reports of some police officers responding to protesters or civil unrest with excessive force. Friedman is the founder and faculty director of the Policing Project at NYU Law.

d) Remove all militarized equipment (the Garage Mahal $1.2 million parking lot in the new jail is designed to house these)