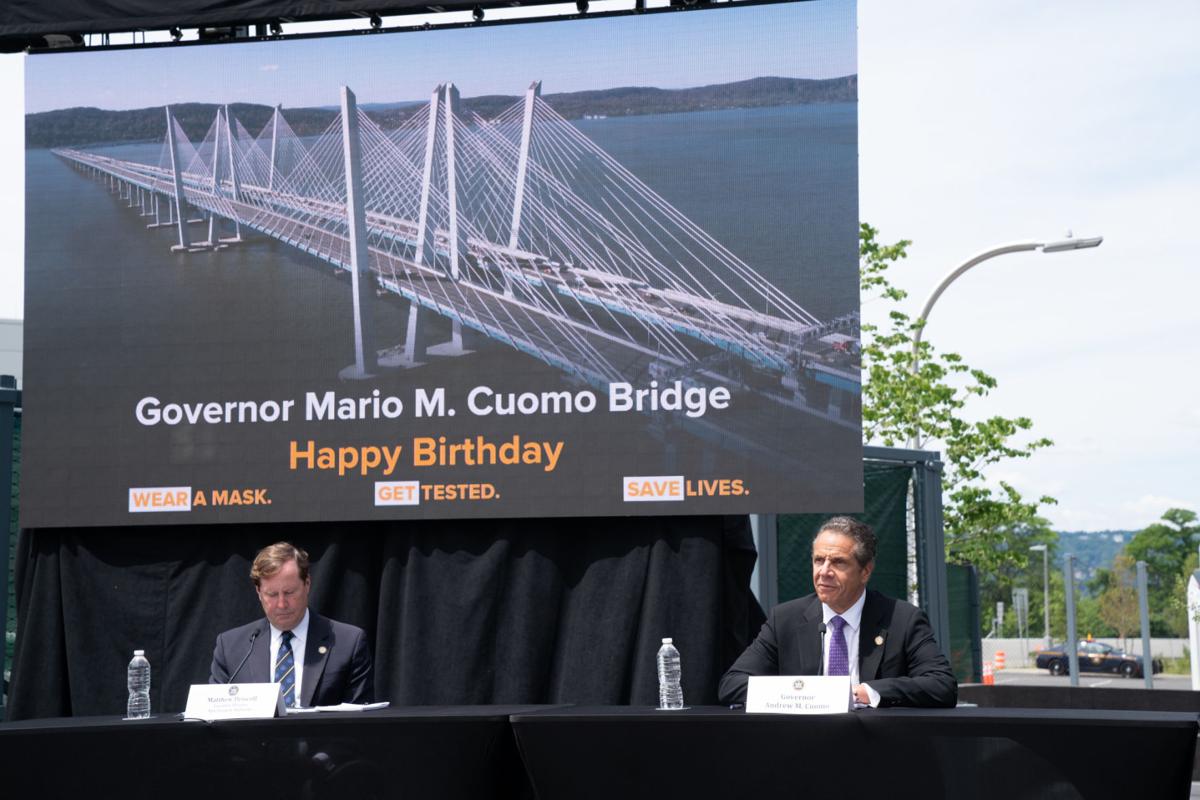 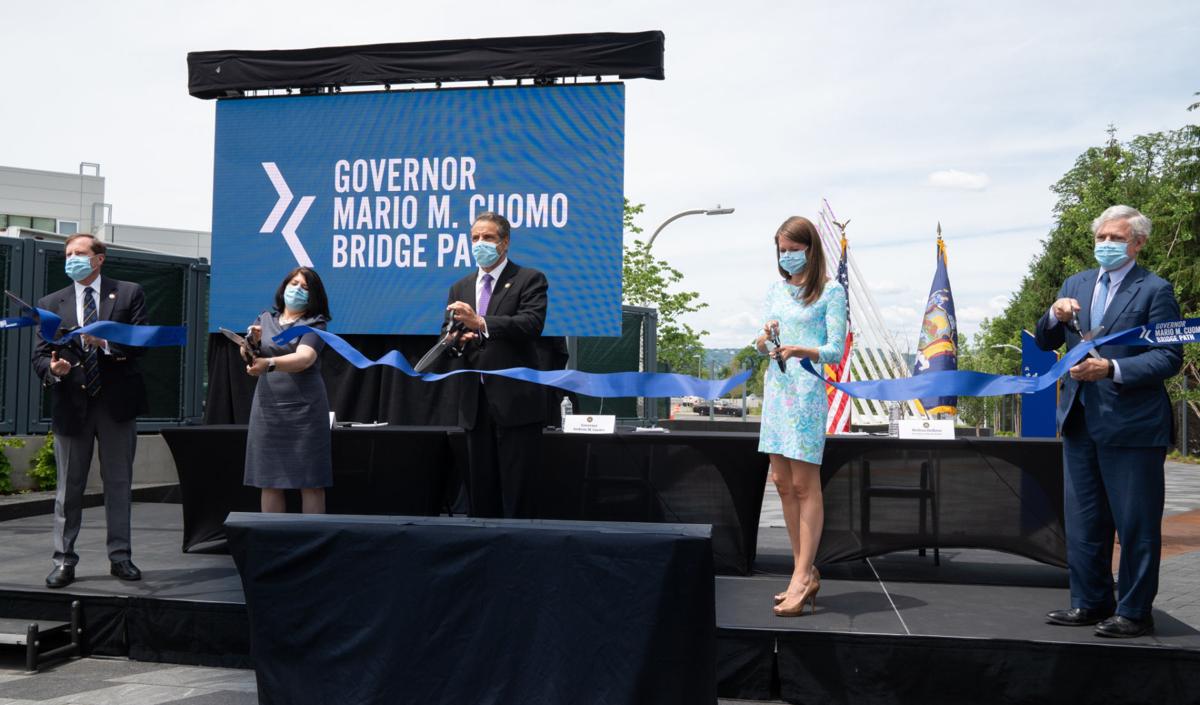 Courtesy of Gov. Andrew Cuomo’s officeGov. Andrew Cuomo and other officials cut a ribbon at the end of his Monday pandemic briefing at the Gov. Mario M. Cuomo bridge in Tarrytown to celebrate the opening of a 3.6-mile bike-pedestrian path on the historic Hudson River crossing. 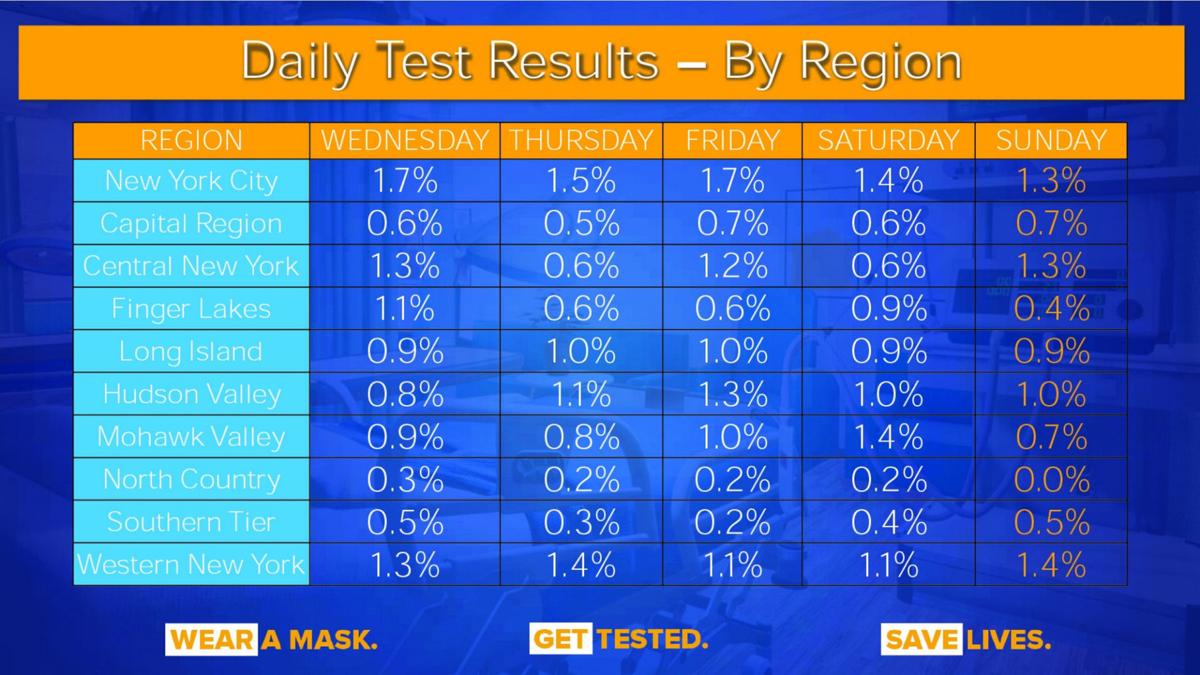 Courtesy of Gov. Andrew Cuomo’s officeGov. Andrew Cuomo and other officials cut a ribbon at the end of his Monday pandemic briefing at the Gov. Mario M. Cuomo bridge in Tarrytown to celebrate the opening of a 3.6-mile bike-pedestrian path on the historic Hudson River crossing.

TARRYTOWN — Gov. Andrew Cuomo is concerned out-of-staters will travel to New York and reverse the state’s COVID-19 infection rate, which is the lowest in the U.S., following a rushed economic reopening in other states and large protests over the last several weeks.

Coronavirus cases have spiked in 22 states and Puerto Rico over the past several days after states rushed reopening their economies without watching regional virus numbers, and the potential impact of three weeks of protests nationwide, the governor said.

“Remember when we started, other states were saying we don’t want people from New York coming to our state because we’re afraid they’ll bring the virus? Well, now we’re afraid people from the other states might come here and increase the viral spread,” Cuomo said Monday afternoon during his daily pandemic briefing.

New York has the lowest COVID-19 transmission rate in the U.S. at 0.78%, or one person with the virus is infecting about 0.78 percent of another person, or less than one, indicating a decline. Arizona has the highest rate of transmission at 1.21 percent. The next three states have similar infection rates at 1.11% in Alaska and 1.10% in Vermont and Arkansas.

The governor held Monday’s briefing at the Gov. Mario M. Cuomo Bridge, named for his late father and 52nd governor of New York, to celebrate the grand opening of the bridge’s 3.6-mile bike and pedestrian walkway.

“The new shared bicycle-pedestrian path is part of our ongoing commitment to modernize and transform the state’s transportation infrastructure,” Thruway Authority Executive Director Matthew Driscoll said before Monday’s ribbon cutting. “Offing the option to walk or cycle across the Gov. Mario M. Cuomo Bridge helps reduce our impact on the environment, just as the implementation of cashless tolling on the Thruway systemwide will by the end of the year.”

The shared-use path was part of the Thruway Authority’s $3.9 billion project to replace the Tappan Zee Bridge in 2017 and features public art, food vendors and free audio tours, and officials expect the Hudson Valley landmark to draw thousands of tourists to the region over the summer months.

“I know it’s going to be a big hit — a big success,” Cuomo said. “The bridge has energized the economy for the entire region.”

People filed complaints about businesses across the state, but most were in Manhattan and the Hamptons.

“These are violations of the law,” Cuomo said. “There is no excuse. What’s alarming about the 25,000 is the volume, but it also shows how smart people are and how offended people are that they’re calling and complaining ... they’re afraid for themselves — especially at bars and restaurants.”

State Liquor Authority inspectors are investigating local bars and restaurants to ensure they are enforcing the regulations, otherwise the establishment could lose its liquor license.

Cuomo ordered local governments and officials Sunday and Monday to monitor the compliance in their municipalities and regions.

“That is the local government’s responsibility,” he said. “You are responsible for compliance. Mayors, executives, you have to do your job. Failure to govern will result in closures.

“If you just allow the violations to continue and nobody does anything, you know what’s going to happen.”

Regions that see a continuing surge in COVID-19 cases, hospitalizations and deaths may have to take more than two weeks between each of the state’s four phases to reopen nonessential businesses, or regress to an earlier phase.

“Better than letting the spike happen is cease, stop the spread,” Cuomo said.

Utah and Oregon rolled back reopening nonessential businesses this week because of the coronavirus spike.

“Imagine how devastating and dramatic an action that is,” the governor said. “What makes the determination? It’s what we do. It’s our behaviors.”

Cuomo signed more police reform bills into law Monday as part of New York’s Say Their Name agenda requiring law enforcement officers to report discharging their weapon within six hours, requiring police departments and courts to track arrest, including race and ethnicity, data and requiring police to provide medical and mental health needs of any person under arrest or in custody.

The 500-plus city and municipal police agencies statewide have 290 days, or until April 1, to publicly meet with their communities and reinvent policing strategies. Local officials must vote and adopt the plan into law to satisfy Cuomo’s New York State Police Reform and Reinvention Collaborative mandate and for police departments to remain eligible for state funding next year. The governor suggested mayors and board or council presidents lead the initiative.

The state will permit large gatherings up to 25 people in phase 3 of reopening, up from 10.

Officials continue to monitor the number of daily, new positive COVID-19 cases across New York. The state had 620 new positive virus cases Sunday, or 1.1% of tests conducted, bringing the statewide total to 383,944 cases.

The state’s 10 regions had between 0.6 to 1.4 percent positive virus tests Saturday of New York’s 50,000-plus diagnostic tests conducted each day.

Staten Island had the largest increase of positive cases in New York City’s five boroughs Saturday at 2.9 percent — up from 1.1 percent positive tests Friday. The number dipped back to 1.5% positives Sunday.

Rockland County showed an increase from 1.4% positive coronavirus tests up to 2.6% positive on Sunday.

Officials will watch state figures for several days to determine if a county uptick is a one-day anomaly, or indicator of a cluster or potential outbreak.

The state saw 25 virus-related deaths Sunday and 23 Saturday — its lowest number of coronavirus fatalities in a 24-hour period since March 20, including 17 in hospitals and six in nursing homes. The state’s daily death toll has continued a flattening decline, but officials do not anticipate the figure will drop lower.

Statewide coronavirus hospitalizations declined to 1,608 patients Monday, down 49, according to the governor’s office.

The enrollment period for New York State of Health, the state’s health plan marketplace exchange, is extended 30 days through July 15.