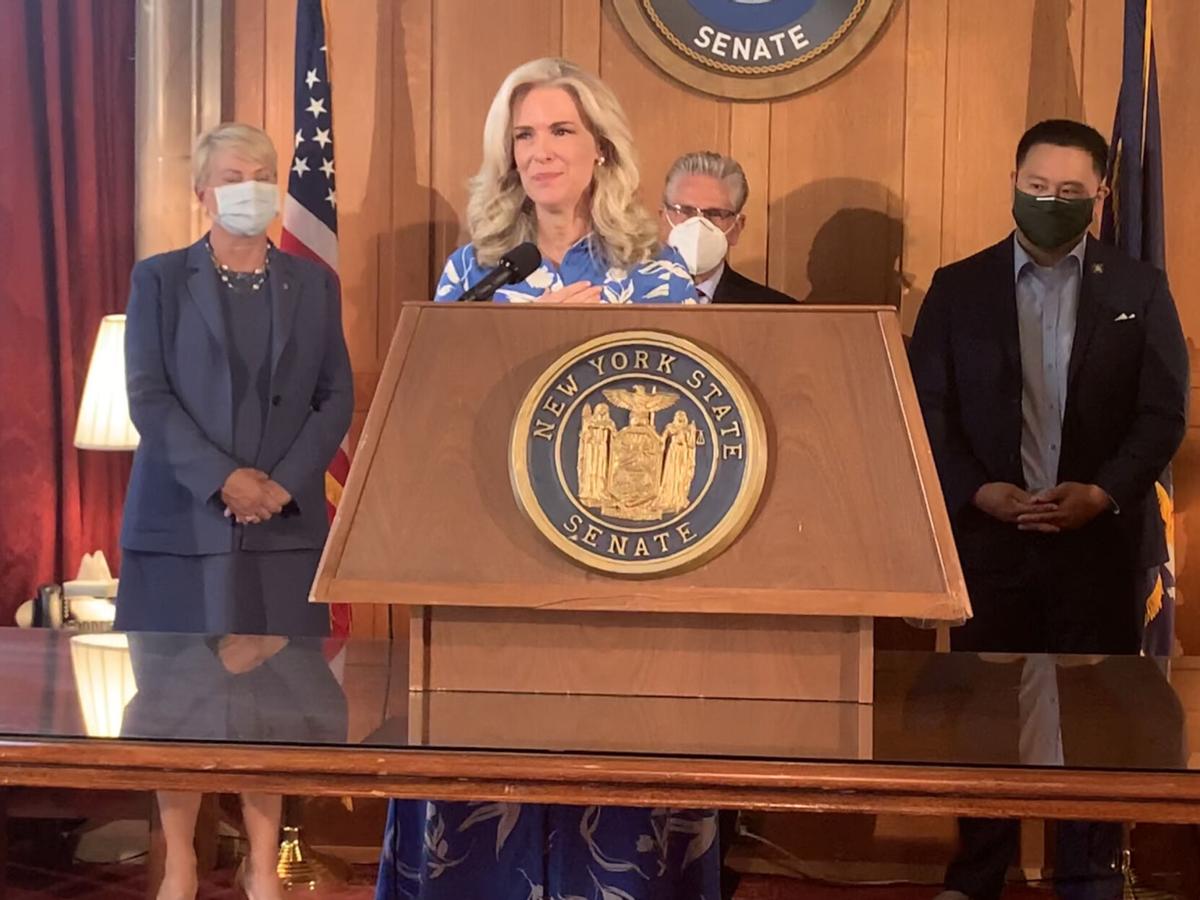 Fox News meteorologist Janice Dean, whose in-laws died from COVID-19 in adult care facilities this spring, became emotional while speaking beside state lawmakers on both sides of the aisle in the state Capitol on Wednesday to demand a bipartisan, independent investigation into New York’s handling of COVID-19 and related deaths in residential facilities. Kate Lisa/Johnson Newspaper Corp. 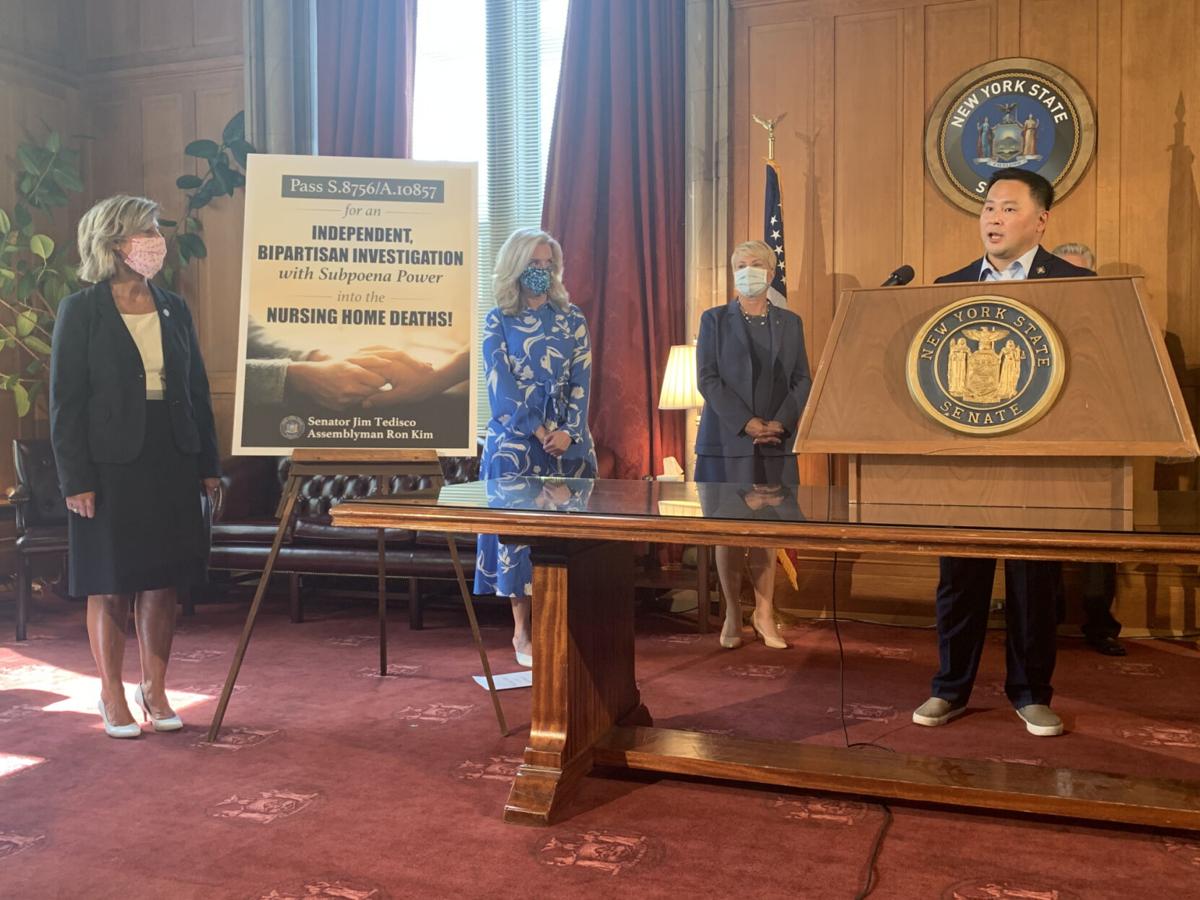 Assemblymember Ron Kim, D-Queens, speaks during a press conference in the state Capitol on Wednesday calling for the passage of legislation for a bipartisan, independent investigation into the state’s handling of COVID-19 in nursing homes. Kate Lisa/Johnson Newspaper Corp. 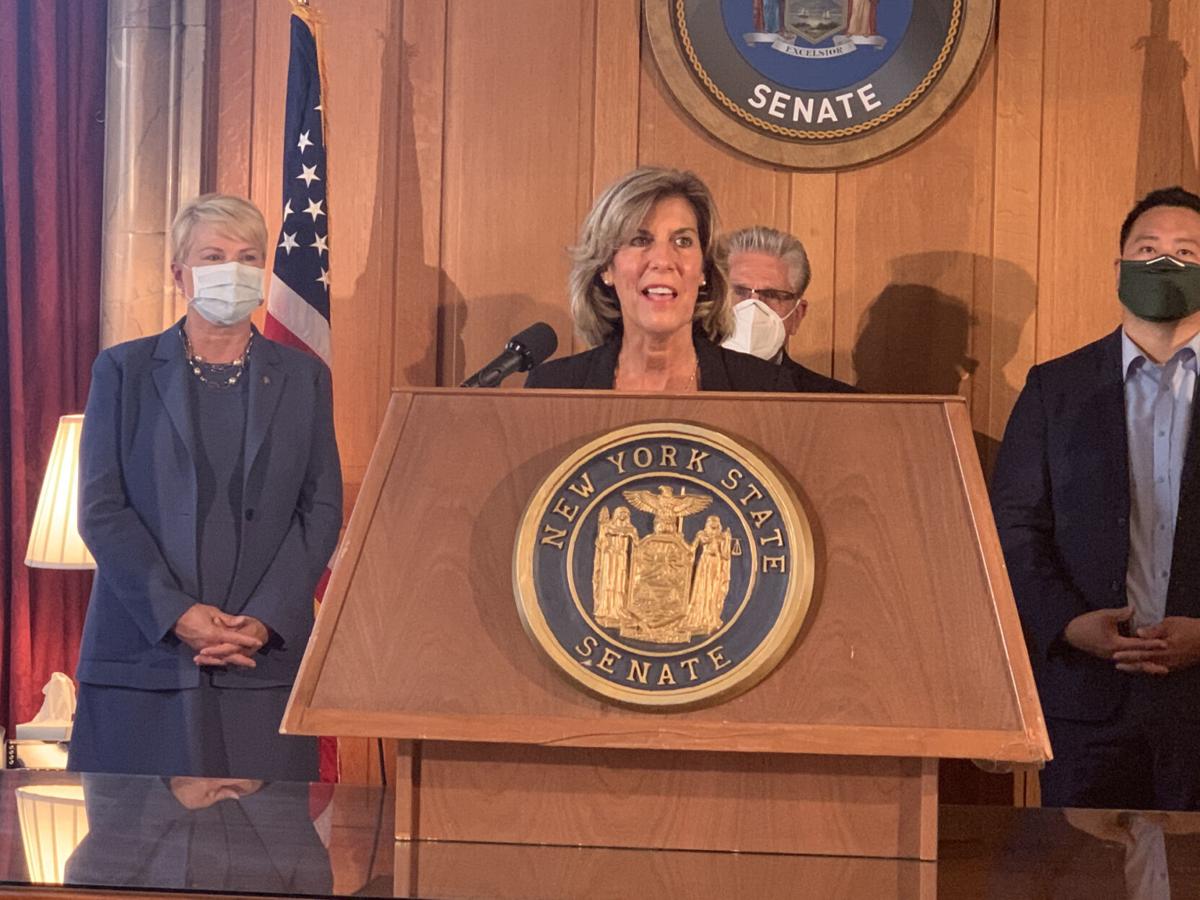 State Sen. Daphne Jordan, R-Halfmoon, joined a bipartisan call in the state Capitol on Wednesday for an independent investigation into the state’s handling of the coronavirus in nursing homes and the 6,400-plus confirmed COVID-19 deaths in adult-care facilities. Kate Lisa/Johnson Newspaper Corp.

Fox News meteorologist Janice Dean, whose in-laws died from COVID-19 in adult care facilities this spring, became emotional while speaking beside state lawmakers on both sides of the aisle in the state Capitol on Wednesday to demand a bipartisan, independent investigation into New York’s handling of COVID-19 and related deaths in residential facilities. Kate Lisa/Johnson Newspaper Corp.

Assemblymember Ron Kim, D-Queens, speaks during a press conference in the state Capitol on Wednesday calling for the passage of legislation for a bipartisan, independent investigation into the state’s handling of COVID-19 in nursing homes. Kate Lisa/Johnson Newspaper Corp.

State Sen. Daphne Jordan, R-Halfmoon, joined a bipartisan call in the state Capitol on Wednesday for an independent investigation into the state’s handling of the coronavirus in nursing homes and the 6,400-plus confirmed COVID-19 deaths in adult-care facilities. Kate Lisa/Johnson Newspaper Corp.

ALBANY — State lawmakers on both sides of the aisle introduced legislation Wednesday demanding an independent investigation into New York’s protocols and COVID-19 deaths in nursing homes.

Assemblyman Ron Kim, D-Queens, called for Gov. Andrew Cuomo and the state Health Department to release the full statistics so lawmakers can divulge the truth about the state’s handling of COVID-19 in adult-care facilities.

“We’ve been given some facts by the governor, but in order to get the truth we need the rest, and that has not been presented to us,” Kim said in the state Capitol on Wednesday. “How can we possibly know what caused the spread? What was the root of the problem if we only have a the quarter of the sample size or people who were infected?”

Sen. Jim Tedisco, R-Clifton Park, and Kim led a press conference in the state Capitol late Wednesday morning introducing bills S.9756/A.10857 to call for an independent, bipartisan investigation with subpoena power into the state’s oversight and regulations, which resulted in more than 6,500 confirmed COVID-19 deaths in New York nursing homes.

Tedisco sponsors the measure in the Senate, with Kim the lead sponsor in the Assembly. Assemblyman Angelo Santabarbara, D-Schenectady, co-sponsors the legislation.

“I’m not here to demonize or vilify the governor. [Families may] be willing to even forgive him if he was truthful and willing to admit there were mistakes made,” Kim said. “Everyone agrees we’re willing to work with him if we can get to the truth.”

Representatives believe the 6,500-plus confirmed deaths represents a significant undercount, as the state has only tallied COVID-19 nursing home resident deaths that took place in the adult-care facility. Residents who were transported to the hospital with the virus and later died there were not included in the total.

“We want the reasons why the actions that took place caused this wildfire,” Tedisco said, adding the state needed to address nursing home issues of patient care and neglect before the pandemic. “Call after call after call — we made calls to the DOH and got not much of a response then. We need real response now.”

Lawmakers grilled state Health Department Commissioner Dr. Howard Zucker at a joint bicameral hearing Aug. 3, but he did not answer questions or provided vague responses to queries posed by representatives, including how many coronavirus-positive nursing home patients were transferred to and died in New York hospitals.

Gov. Andrew Cuomo and Zucker declined to be interviewed at a subsequent legislative hearing Aug. 10. Senate and Assembly Republicans, both minority conferences, do not have subpoena power to call witnesses.

Cuomo’s office did not respond to multiple requests for comment Wednesday on the proposed bills or bipartisan support for an investigation.

“It was a significant failure we cannot allow to happen again,” Tedisco said. “That’s why this independent investigation nonpartisan with subpoena power is so very much important. We have to get the best, realistic answer about why this happened.”

Fox News meteorologist Janice Dean, who had family members die from COVID-19 in New York adult-care facilities, testified during the GOP’s forum Monday, which was livestreamed on the state Senate Republicans’ Facebook page. Dean tearfully reviewed her family’s story at the state Capitol on Wednesday.

Dean’s in-laws, Mickey and Dee Dean, both of New York City, died from COVID-19 in their separate downstate adult-care facilities, which Janice did not name, two weeks apart.

“I’m used to broadcasting storms, I’m not used to being in one,” Dean said. “It shouldn’t matter who I voted for or who I work for. I was affected by this.

“I have a platform to start raising these questions on my own and I am grateful for the place that I work in allowing me to do that. ... It’s my honor to be here and I’m looking forward to hearing those answers and being able to feel that my grieving is important and it will lead us somewhere.”

The state Health Department March 25 memo, which Dean said she believes contributed to the state’s COVID-19 spread and death in adult-care facilities, mandated residents can return home to recover, similar to other virus patients. At the time, officials were concerned about hospital overflow of COVID-19 patients, and ordered nursing homes cannot discriminate against residents by not readmitting people who were infected with the coronavirus.

Residents were not required to be tested for COVID-19 before readmission. Gov. Cuomo has said the state’s directive was based on the Center for Disease Control & Prevention’s guidance at the time.

The Health Department absolved itself in a self-published report July 6 on COVID-19 fatalities in nursing homes and found staff and visitors brought the virus into the facilities.

Zucker argued in July, and testified before the Legislature on Aug. 3, the department’s March memo did not contribute to the state’s number of coronavirus deaths in New York nursing homes.

“After March, they stopped counting individuals who went into nursing homes,” Tedisco said. “We don’t know when the peak was ... and that’s important. The DOH couldn’t have possibly given us that because we don’t have the numbers. The real numbers matter.”

Representatives argued Wednesday their demand for an independent, bipartisan probe proves the legislation is not politically motivated.

“The call for attention to this issue is legitimate,” Griffo said. “It’s not motivated by politics — it’s motivated for people. There’s a care and a concern about people and their lives. They deserve answers. It’s not about pointing fingers, it’s about accountability.”

Sen. Daphne Jordan, R-Halfmoon, who represents parts of Columbia County, said many residents in the district lost relatives to COVID-19 in adult-care facilities and are grieving.

“My hearts to go out to these families who lost a loved one because of the state’s disastrous policies,” she said.

If passed, the proposed legislation would create a bipartisan state commission to investigate the state’s nursing home deaths.

“The commission would be empowered and expected to follow the truth wherever it leads and whomever it implicates, regardless of their power or position,” Jordan said.

Representatives called to pass the legislation and begin the investigation as soon as possible, saying state protocols must be amended before a potential second wave of the pandemic this fall.

“The bill must pass before session ends so we can make sure the tragedy that befell some of our most vulnerable citizens never happens again,” Jordan said.