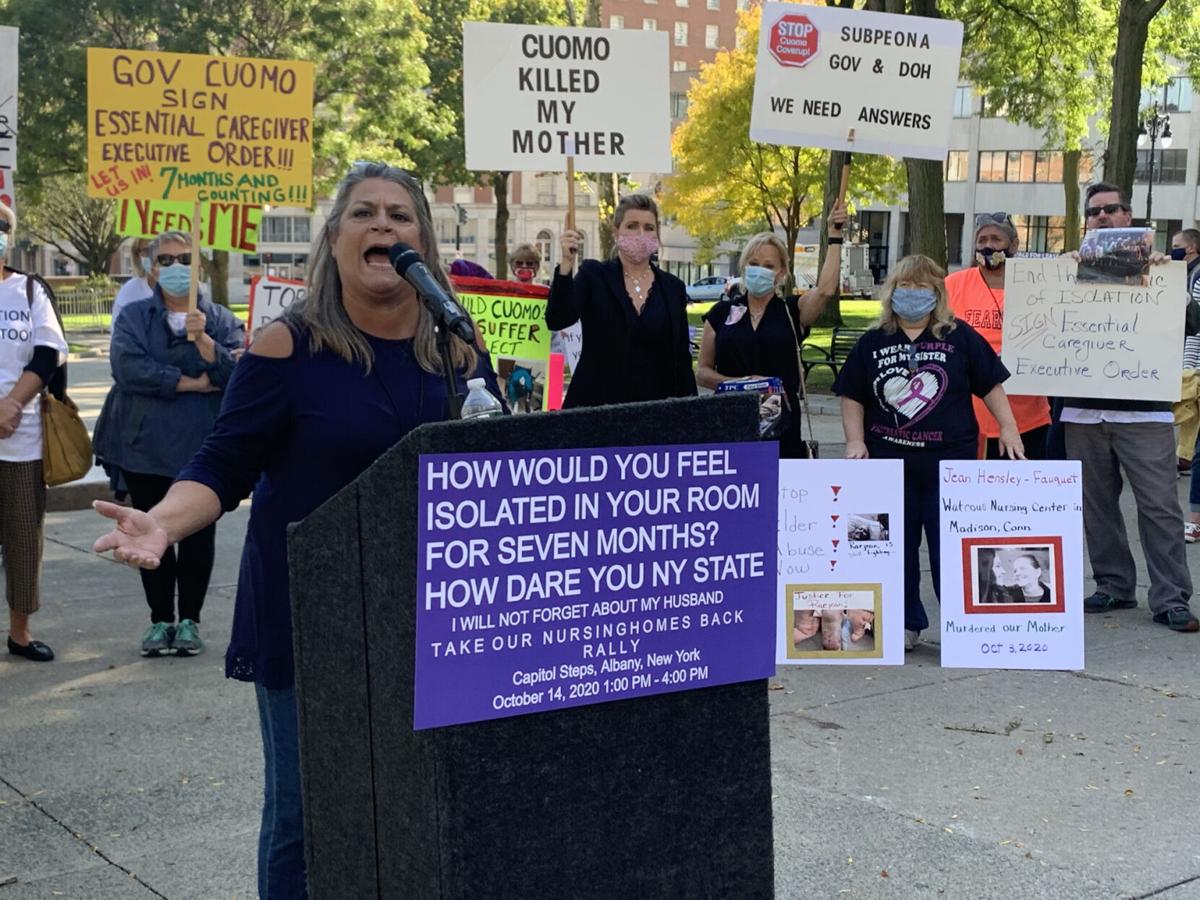 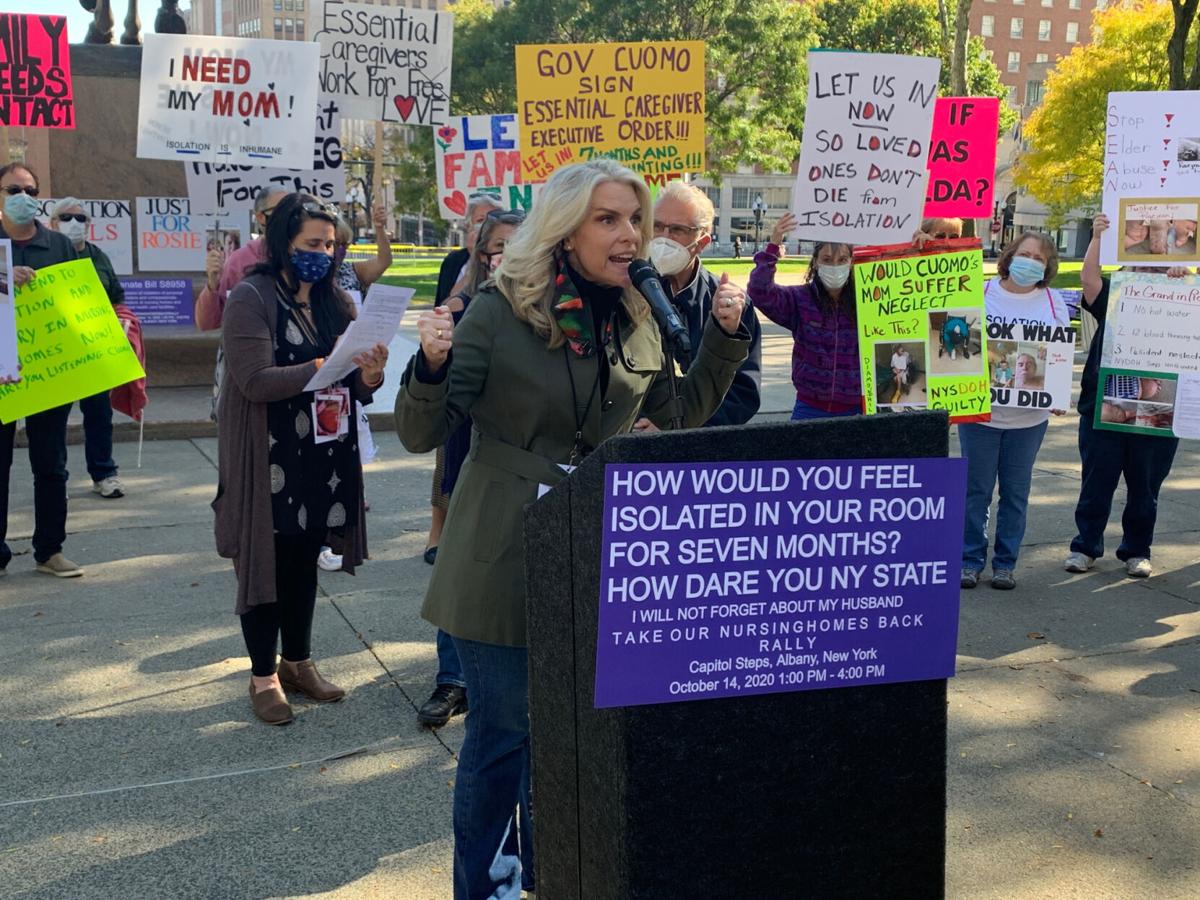 Fox News meteorologist Janice Dean, who has been a prominent figure at the head of the fight for the state to release updated COVID-19 nursing home death counts, speaks at a rally Wednesday to encourage lawmakers to change New York’s visitation policy through the pandemic to allow essential caregivers into adult-care facilities. Kate Lisa/Johnson Newspaper Corp. 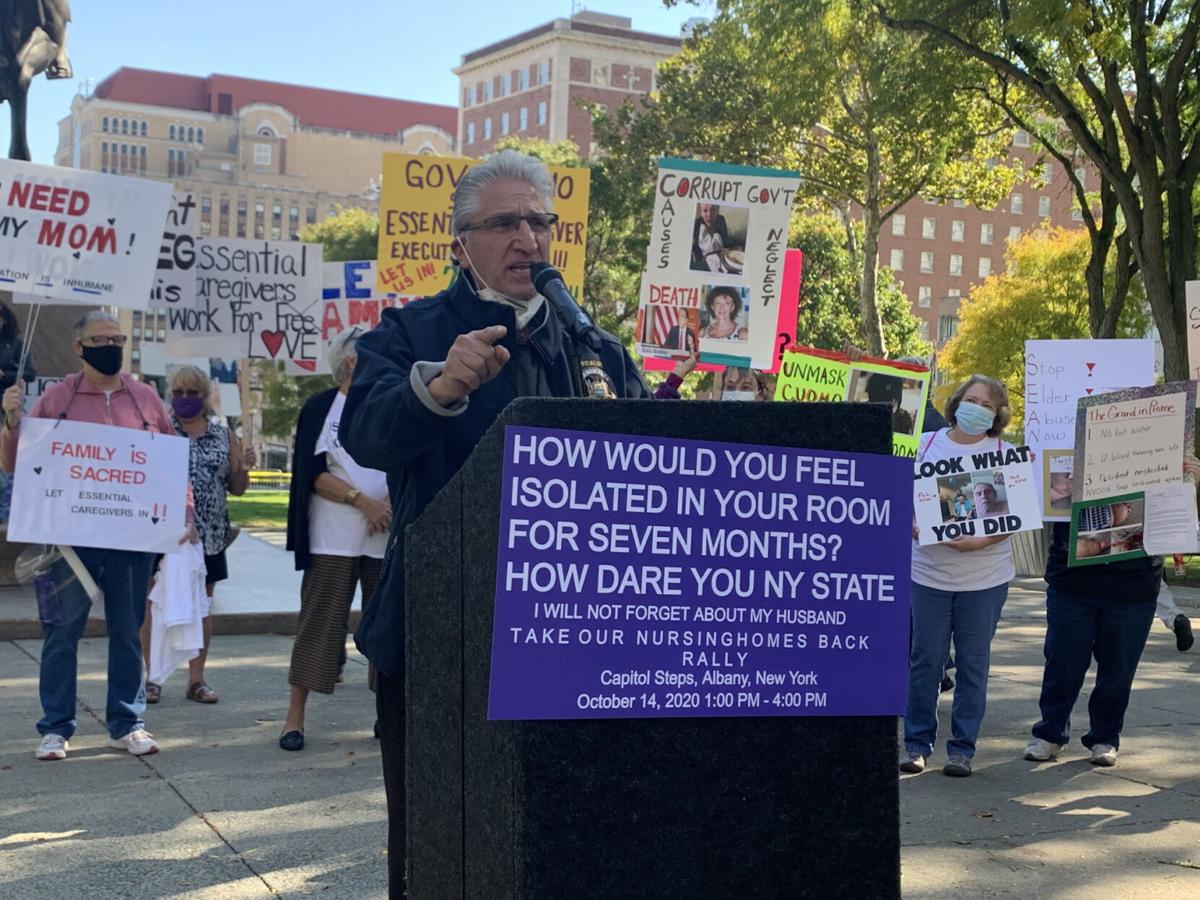 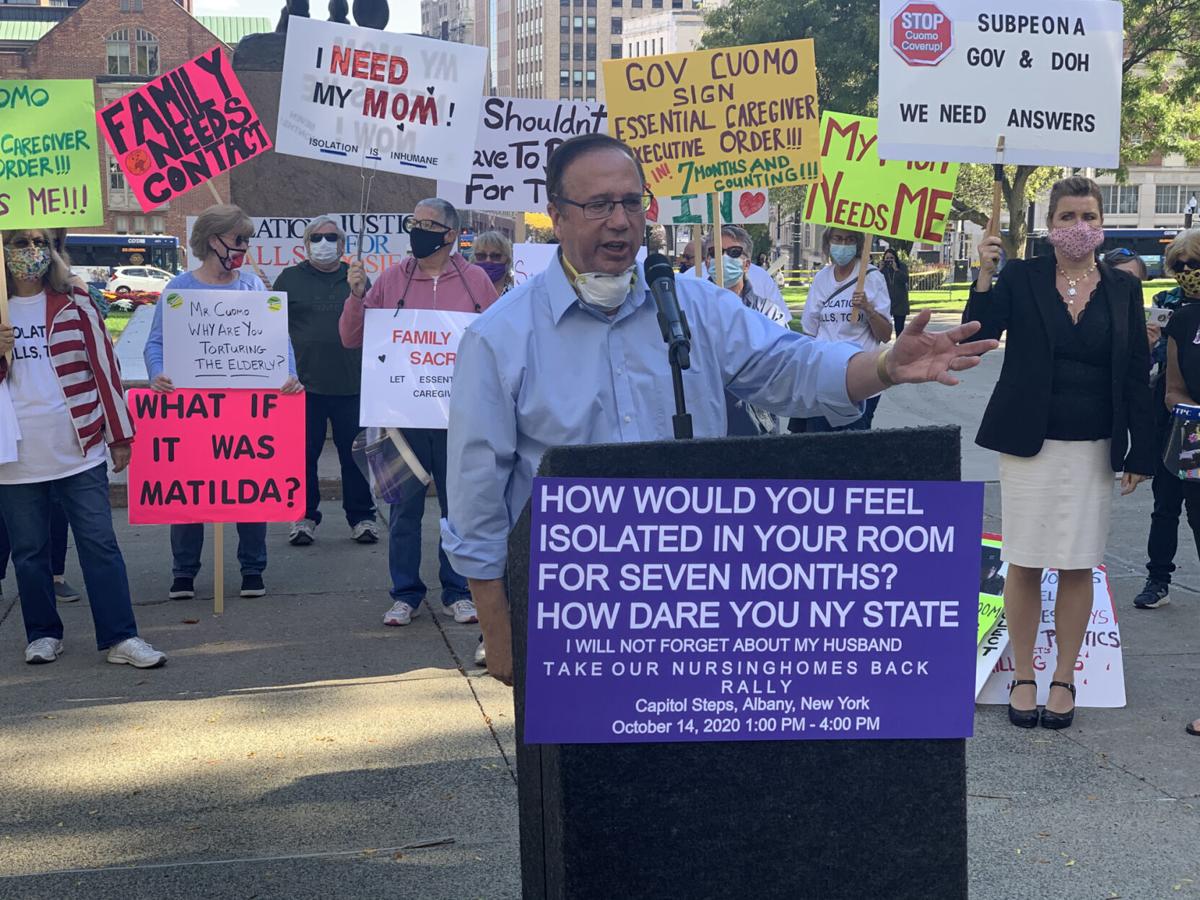 Fox News meteorologist Janice Dean, who has been a prominent figure at the head of the fight for the state to release updated COVID-19 nursing home death counts, speaks at a rally Wednesday to encourage lawmakers to change New York’s visitation policy through the pandemic to allow essential caregivers into adult-care facilities. Kate Lisa/Johnson Newspaper Corp.

ALBANY — Dozens of advocates and loved ones cried “Let us in” on the steps of the state Capitol for three hours Wednesday afternoon, demanding state officials permit essential caregivers into New York nursing homes during the COVID-19 pandemic and to release updated virus death counts in adult-care facilities.

Carla Conley, of Utica, shared the story of her elderly mother, Rosie Abraham, who died Oct. 4.

“My mother Rosie lost her battle due to isolation, failure to thrive and neglect,” Conley said outside the Capitol on Wednesday. “My mother was starved to death. She was dehydrated.”

Conley last visited her mother in person March 6, and was prevented from seeing her mother because of the ongoing coronavirus pandemic. State adult-care facilities were closed to visitors in mid-March to prevent additional spread.

New York nursing homes resumed limited visitations Sept. 15 for facilities without COVID-19 for at least 14 days — a revision to the previous 28-day guidelines set by the federal Centers for Medicare and Medicaid Services.

At the time, the state’s updated guidance allowed eligible visitation in about 500 of the state’s 613 nursing homes.

Advocates argued essential caregivers must be allowed into adult-care facilities.

“I saw my mother every single day; I fed her, my father fed her,” Conley recalled, adding nursing home staff and aides assured Rosie’s family she was doing well and properly eating and drinking.

Rosie broke her leg last December, which left her unable to walk.

“My mother died from severe dehydration — sepsis from a [urinary tract infection] they didn’t catch,” she added. “A pressure ulcer on her backside that would turn your stomach. If I could show you the pictures I took of my mother on Sept. 27 after seven hours of fighting to get her to an emergency room — she looked dead.”

“[Gov. Cuomo] can’t count to 12,000, but I bet he can count the dollars on the check from the book sales,” said McLaughlin, referring to the recent publication of the governor’s new book about the pandemic.

“We are on the side of the angels,” McLaughlin said. “Isolation kills. Defiance is key with this governor. He is a thug.

“This Legislature is not getting its job done.”

Senior Advisor to the Governor Rich Azzopardi responded to McLaughlin’s claims in a statement Thursday.

“Steve McLaughlin is a proven sexual harrasser, was accused of assaulting a staffer, tried to intimate a candidate out of a mayoral race in a backroom deal because he ‘was the boss’ of his county and not only has he flaunted every science-based ‎strategy for fighting this pandemic, he actively tried to block state and federal inspectors from the county nursing home,” Azzopardi said. “This guy calling someone else a thug is as credible as Michael Vick appearing in an ASPCA commercial.”

Tedisco and Assemblyman Ron Kim, D-Queens, sponsored legislation to establish an independent, bipartisan investigation with subpoena power to examine the handling of COVID-19 in state adult-care facilities and nursing homes.

New York has reported more than 6,600 nursing home deaths since the pandemic struck in March, but the state has only tallied the deaths of those who died in the homes, not hospitals. Critics have said the current figure doesn’t provide a full picture of the issue.

Lawmakers, officials, advocates and family members have repeatedly called for an independent investigation and for the state Health Department to release an accurate count.

State Health Department Commissioner Dr. Howard Zucker did not answer or provided vague responses to questions during a bicameral hearing Aug. 3 about how many coronavirus-positive nursing-home patients were transferred to and died in New York hospitals, citing frequently changing numbers as the pandemic continues.

Dean’s in-laws, Mickey and Dee Dean, both of New York City, died from COVID-19 in their separate downstate adult-care facilities, which Janice did not name, two weeks apart.

“We need to make sure there’s a safe way to see our loved ones,” Dean said from a podium in front of the Capitol steps. “They’re dying because they’re not seeing their loved ones, they’re not eating properly and this is something we need to address right now.”

Cuomo has repeatedly brushed off questions about state nursing home deaths, labeling the requested probe a political ploy by Republicans attacking Democratic states, which initially had higher COVID-19 outbreaks when the pandemic first ravaged the nation this spring.

New York is ranked 46th out of 50 U.S. states for its percentage of confirmed, reported coronavirus deaths in adult-care facilities. The governor suggested officials examine other state nursing home deaths related to COVID-19 as the virus has spread nationwide, and continues to increase in dozens of states.

The state Health Department absolved itself in a self-published report July 6 on COVID-19 fatalities in nursing homes and found staff and visitors brought the virus into the facilities.

“There are 45 other states that are more likely for you to be looking at,” Cuomo added. “I don’t have any new information, unless Dr. Zucker does.”

Zucker did not provide new information about the nursing home numbers in question Monday.

“I’m a Democrat — this is not political,” said famed civil rights attorney Michael Sussman, of Sussman Law Office in Goshen. “This is about fundamental human rights.”