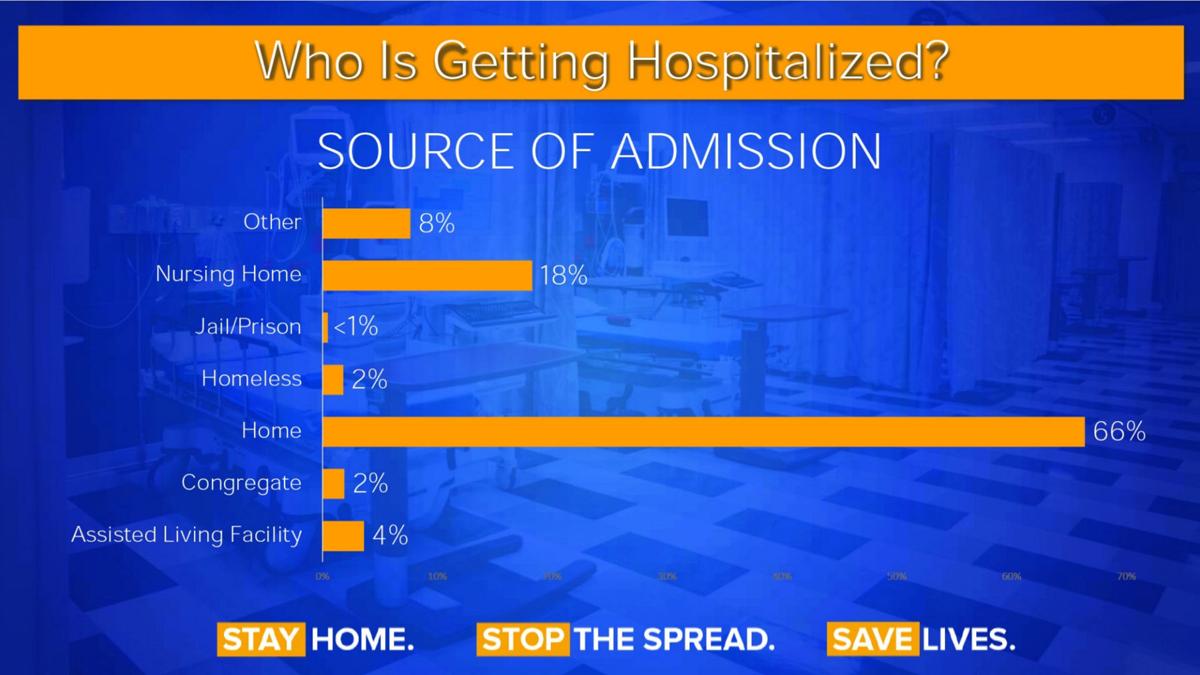 Courtesy of Gov. Andrew Cuomo’s officeThe majority of newly hospitalized New Yorkers with coronavirus COVID-19 were admitted to the hospital from home, with 18% of patients admitted from nursing homes. 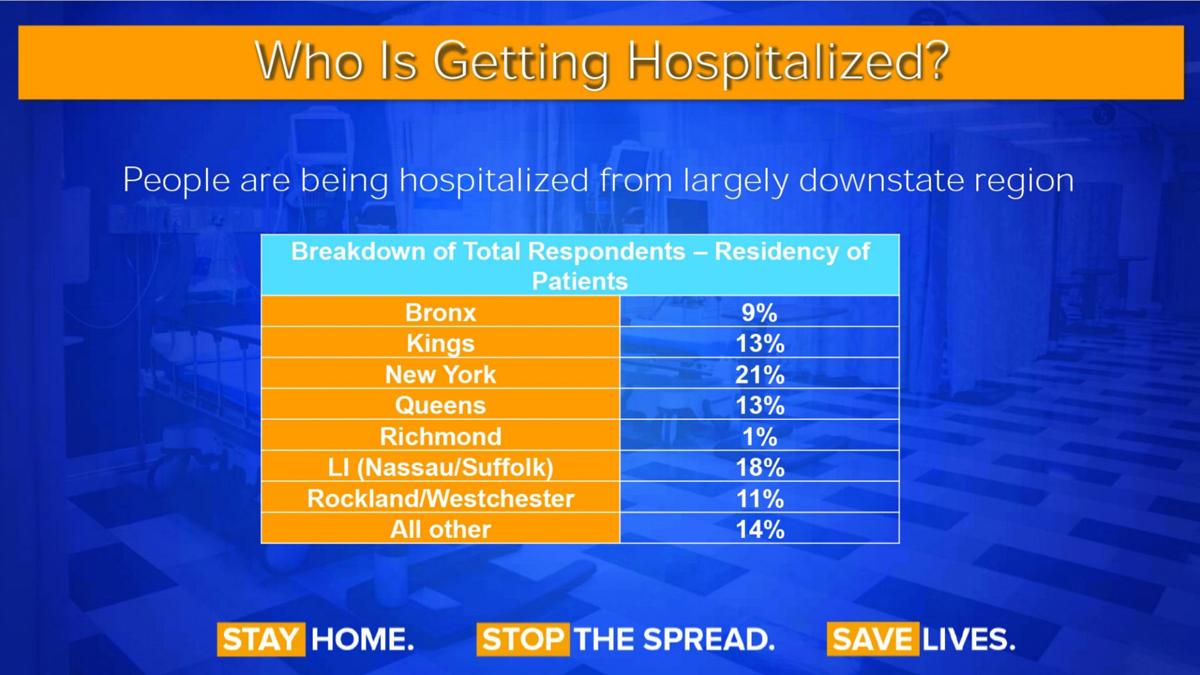 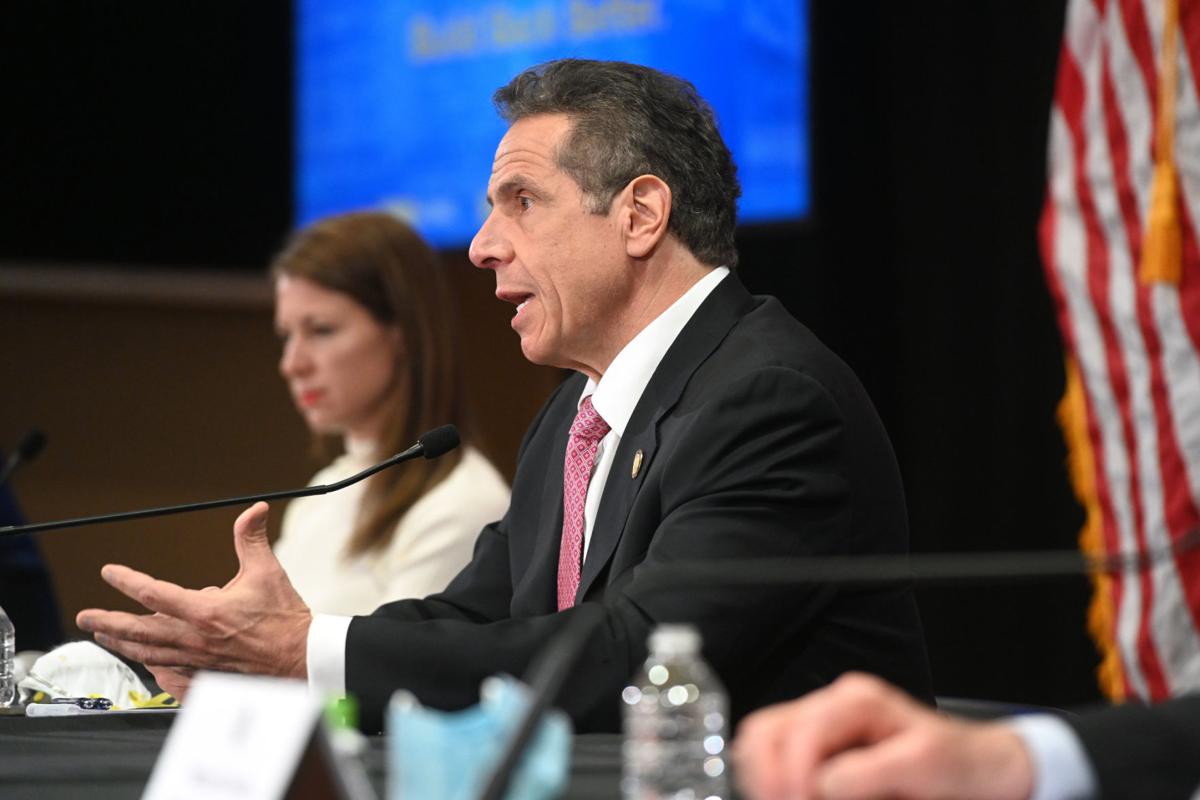 Courtesy of Gov. Andrew Cuomo’s officeThe majority of newly hospitalized New Yorkers with coronavirus COVID-19 were admitted to the hospital from home, with 18% of patients admitted from nursing homes.

MANHASSET — The state must hold its previously canceled presidential primary and Gov. Andrew Cuomo cast doubts Wednesday about how long a person remains immune to COVID-19.

The New York Democratic presidential primary must take place June 23 after a judge ruled Tuesday canceling it is unconstitutional. Not holding the election would deprive withdrawn presidential candidates Bernie Sanders and Andrew Yang of proper representation at the Democratic convention.

“You still have to run elections,” Gov. Andrew Cuomo said Wednesday during a coronavirus briefing at the Feinstein Institute for Medical Research in Manhasset. “I don’t think it’s a good idea to have people go standing in line to vote. You shouldn’t say to a person if you want to exercise your civic duty you have to endanger your public health and possibly endanger others.”

The ruling, by U.S. District Court Judge Analisa Torres of the Southern District of New York, came after Yang sued the state Board of Elections following its decision last month to cancel the primary, saying it violated his constitutional rights to amass delegates and win influence at the Democratic convention this summer. Others joined him in the lawsuit.

Torres said the decision by the Board of Elections “deprived them of associational rights under the First and 14th Amendments to the Constitution.”

Every New Yorker eligible to vote in the June primary election can vote by mail-in absentee ballot.

“My two cents to people is, please vote by absentee ballot so you don’t show up if you don’t have to show up,” said Cuomo, adding people who vote in person must remain 6 feet apart.

Officials are working with county board of elections and state Republican and Democratic committees to ensure localities have enough materials to conduct the election by mail. Municipalities may have to ask for assistance from the National Guard, Secretary to the Governor Melissa DeRosa said Wednesday.

Cuomo said he has not heard of issues with local boards of election to date. Officials have not made a decision about November’s general election.

Certain elections may not be called on election night.

“That is a reality people should prepare for,” DeRosa said. “The hope is the majority of the people will be mailing in their absentee ballot. We want to make sure that the counting process is done right and is thorough and people continue to have confidence and faith in democracy, and so that may mean certain elections are called a couple of days afterward to make sure the counts are done properly.”

The state has conducted thousands of COVID-19 antibody tests over the past several weeks, testing New Yorkers for antibodies to detect virus immunity.

Officials initially said a person with COVID-19 antibodies was immune to a second infection.

The Centers for Disease Control and Prevention is studying the virus’ genetic footprint, state Department of Health Commissioner Dr. Howard Zucker said. Recent reports suggested a different, more lethal coronavirus strain arrived on the East Coast from Europe rather than the original strain from Wuhan, China.

“Unfortunately, not all the information is out yet about whether it’s mutated and what the difference in the virus is...in regards to one strain being stronger than another,” Zucker said, adding officials initially thought COVID-19 antibodies prevented reinfection.

“We continue to learn more about this virus every day,” Zucker said. “That’s one of the things we will learn more about is the protection from when you have antibodies and what that means, and also how long that protection would last. It’s a great question, but it’s hard to give an answer right now. There’s still more research to do.”

New York’s COVID-19 fatalities reached at least 19,877 Wednesday — up from 19,645 Tuesday. Cuomo cautioned the state’s reported death toll is likely incorrect, saying he believes the total is much higher because of unattributed in-home deaths and a new CDC report that suggests the virus arrived from Europe on the East Coast in late November or early December.

The state saw 232 virus-related deaths Tuesday, including 207 in hospitals and 25 in nursing homes. The death rate remains flat after a slight decline from 230 fatalities Monday, 226 Sunday and 280 Saturday.

The state tested 1,055,921 people as of Wednesday, revealing 323,978 total positive cases of COVID-19. New York’s hospitalization rates continued a downward trend to 9,179 patients Wednesday, down 421 patients, according to the governor’s office. Last week, about 1,000 new virus patients were hospitalized statewide each day, but that number dipped to 601 Wednesday — the lowest since March 21.

Former Google CEO Eric Schmidt will lead a new Blue Ribbon Commission to “reimagine” or develop ways to improve New York’s health care and education systems. Hospitals must be reorganized to operate as one system in a public-health emergency, and more technology must be implemented into state classrooms to improve distance-learning opportunities under the pandemic’s new social-distancing “normal,” Cuomo said.

Schmidt is the third billionaire the state announced a partnership with to rethink state operations during the pandemic. The state announced Tuesday the Bill & Melinda Gates Foundation will assist in education system changes. Former New York City Mayor Michael Bloomberg committed $10 million to the state last month to fund a contact-tracing program.

The governor highlighted new projections that show New York’s COVID-19 infection rate and numbers continue to decline, but other states that accelerated reopening in recent weeks have skyrocketing numbers of new virus cases.

Officials are analyzing the hundreds of New Yorkers with COVID-19 who enter hospitals each day. The state has gathered information from 113 hospitals with 1,269 survey responses in the last three days.

An overwhelming majority of the surveyed patients were admitted to hospitals from home. Nursing-home residents account for 18% of the new hospitalizations and 8% from other areas. The patients are disproportionately older, with 59% over the age of 61.

Preliminary hospitalization survey results also show the most number of new patients in downstate facilities with 21% admitted in New York City, 18% on Long Island and 13% each in Queens and Kings counties. Communities of color are hospitalized the most frequently in New York City with 25% African-American, 20% Hispanic or Latino and 8% Asian patients.

The nation’s meat industry and processing plants have served as coronavirus “hot spots.” Madison and Oneida counties saw a spike in COVID-19 cases after an outbreak tied to an essential agricultural business.

“It’s not about meat or vegetables — it’s about density and large gatherings,” Cuomo said. “It’s when you run a facility with a large number of workers in a dense environment.”

5 simple ways to protect the ocean

The simple guide to buying a toilet

Bathroom remodel: 4 questions to ask before you customize