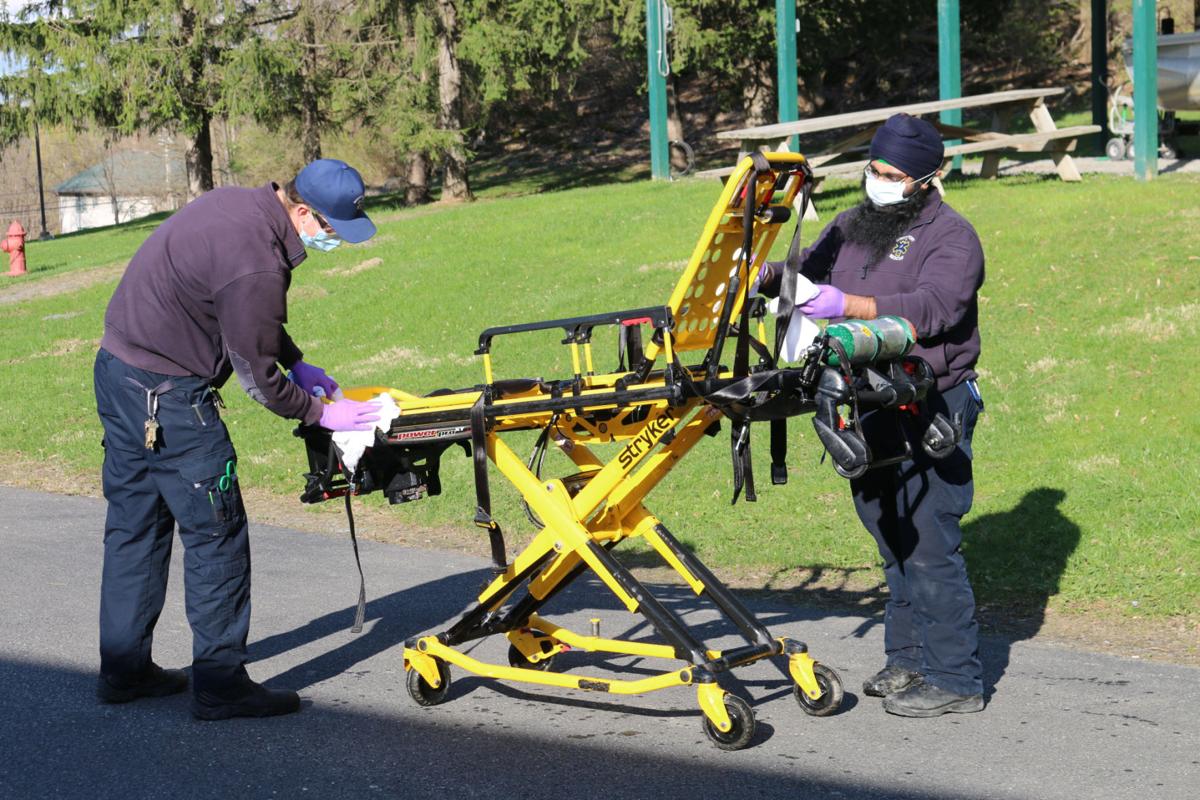 Nora Mishanec/Columbia-Greene Media Members of the Greenport Rescue Squad decontaminate equipment after returning from a call on Thursday. 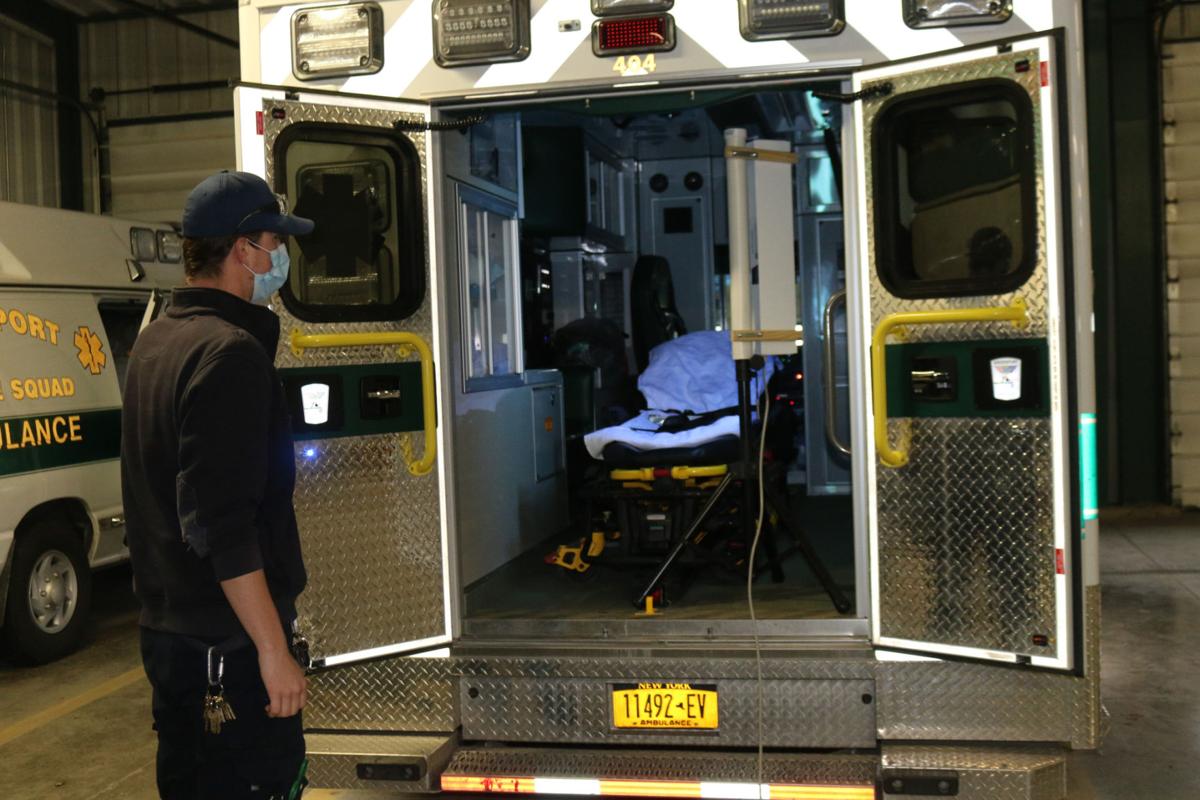 Nora Mishanec/Columbia-Greene Media Equipment is decontaminated after returning from a call on Thursday. 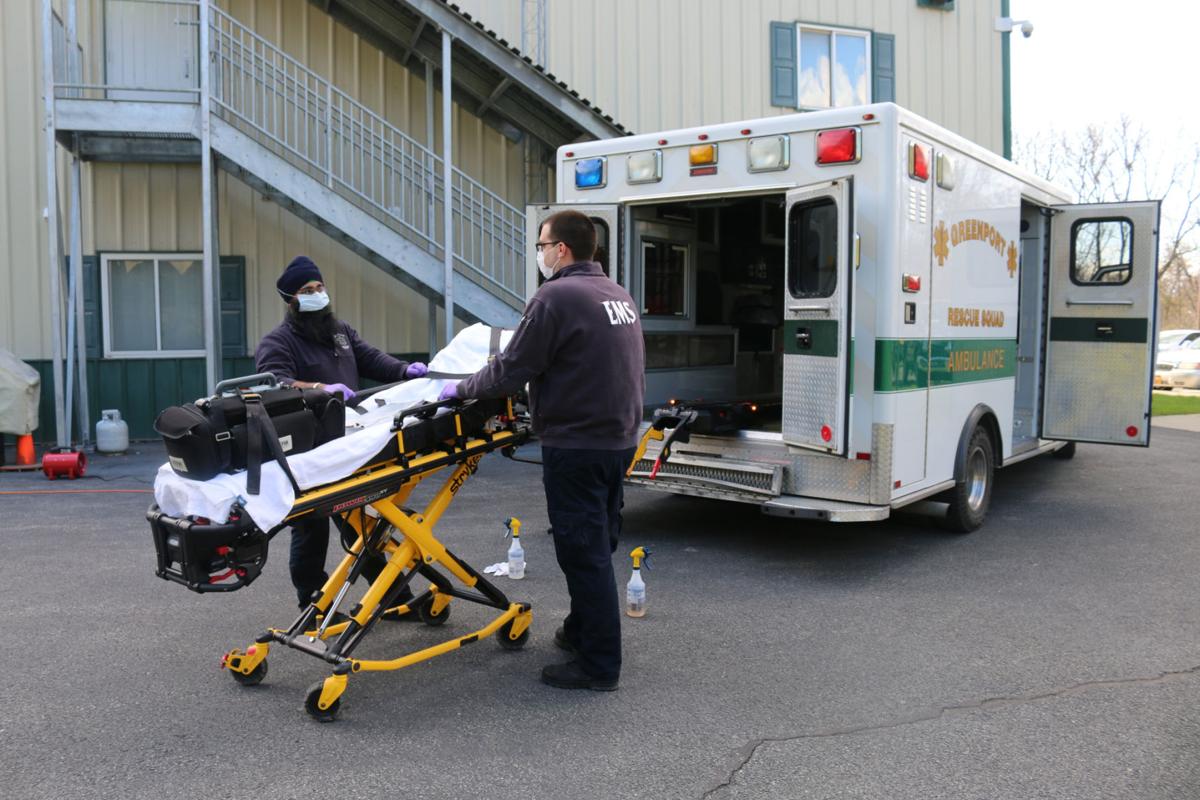 Nora Mishanec/Columbia-Greene Media Members of the Greenport Rescue Squad decontaminate equipment after returning from a call on Thursday.

Nora Mishanec/Columbia-Greene Media Equipment is decontaminated after returning from a call on Thursday.

Dispatching an ambulance takes just minutes, but for the Greenport Rescue Squad and other rescue crews around the region, that one call may result in an hour or more of COVID-19 decontamination work.

“People think they call 911 and the ambulance just shows up,” said Greenport Rescue Squad President Antonio Merante Jr. “I don’t think they realize that there is a process to go through, protocols to keep everyone safe.”

Since the beginning of the COVID-19 pandemic, rescue crews across Greene and Columbia counties have been called to transport symptomatic patients and those suspected of carrying the virus. As the designated transport team for Columbia Memorial Health, the Greenport Rescue Squad also does planned transports of known COVID-19-positive patients.

When called to transport a COVID-19 patient home from Columbia Memorial or to Albany Medical Center, Greenport’s emergency-service providers wear hooded Tyvek suits and Power Air Purifying Respirators, known as PAPRs, which filter the air inside the suit. The suits were purchased amid fears of an Ebola outbreak in 2014 and the PAPRs were bought on eBay from Canada in January.

Returning to the station, the EMS providers begin a multi-step process to decontaminate the ambulance and all equipment.

First, the ambulance is parked outside and the crew places a fan inside to blow out any loose particulates inside the vehicle, said Greg Fox, Greenport Rescue Squad’s advanced life-support coordinator. Then the ambulance surfaces are sprayed with a disinfecting 10-to-1 bleach mixture.

The returning EMS providers, still in their suits, begin an hour-long decontamination protocol.

“We are sprayed with bleach when we come back,” Fox said. “We wait 10 minutes, then we get hosed off and then we go into the shower.”

Meanwhile, the bleach-sprayed ambulance is cleaned out with water and crew members place ultraviolet sterilization lights inside the vehicle to kill any remaining traces of the virus. The whole process must be completed before the ambulance can be sent on another call.

The COVID-19 transfers from CMH are planned in advance, which gives Greenport EMS providers time to put on their Tyvek suits and PAPR devices. The extra layers of protection are necessary because providers are spending more time with the patient, sometimes traveling all the way to Albany, Fox said.

But EMS providers do not have time to put on full Tyvek suits when responding to emergency calls with suspected or confirmed cases of COVID-19.

“During the day shift, you have one minute to answer that call and have your ambulance en route,” Merante said. “On the overnight, you have two minutes to be out the door.”

Instead, the crew follows a “respiratory-precaution” protocol, which means quickly donning face shields, gloves, N95 masks and gowns. Arriving on the scene, the EMS providers perform a “six-foot assessment” before treating the patient or taking them to the hospital, Fox said.

Returning from a respiratory-precaution call, the EMS providers follow the decontamination protocol and sanitize their protective gear, which will be reused on future calls.

“We wash the gowns as many times as we can and sanitize the masks using the UVC lights,” Merante said.

The Greenport squad’s 40 employees are diligent about caring for their protective equipment because they know they may not receive enough replacement gear from the state, Merante said. They have developed a system for washing and hanging out the gowns to dry.

“The record is one Saturday when we did six respiratory-precaution calls in one day,” said Fox.

For some crew members, that meant decontaminating and showering three times in a single day.

Merante said the COVID-19 pandemic has reinforced his rescue squad’s commitment to safety and teamwork. The EMS providers are taking every precaution to keep themselves and their families safe, while understanding the risks involved in their line of work.

“We hold meetings to talk about safety and see how do people feel,” said Fox, who also teaches EMT classes at Questar. “Someone said, ‘I got into this to help people. I am here to help people, so if I have to suit up and put myself in a little bit of risk, that is what I signed up to do.’”

Keeping the entire Greenport squad updated is a constant challenge, Fox said. The team holds morning briefings and posts information on white boards to keep all EMS providers on the same page, as protocols can change from day to day.

The squad members are constantly experimenting with creative ways to improve their decontamination process, Fox said.

“It is a group effort, with everybody pitching in to say, ‘How can we make it better? Let’s try this,’” he said.

Outside hangs a banner with the rescue squad’s motto: “All for one, one for all, on the front line for you.” Some community members have taken the time to recognize the Greenport crew for their efforts on the front line, dropping off cookies, pretzels and soup.

“Some people have made small monetary donations, saying, ‘Hey, we know you’re spending money on extra equipment, please use this,’” said Michael Cozzolino, deputy chief of the Greenport Rescue Squad.