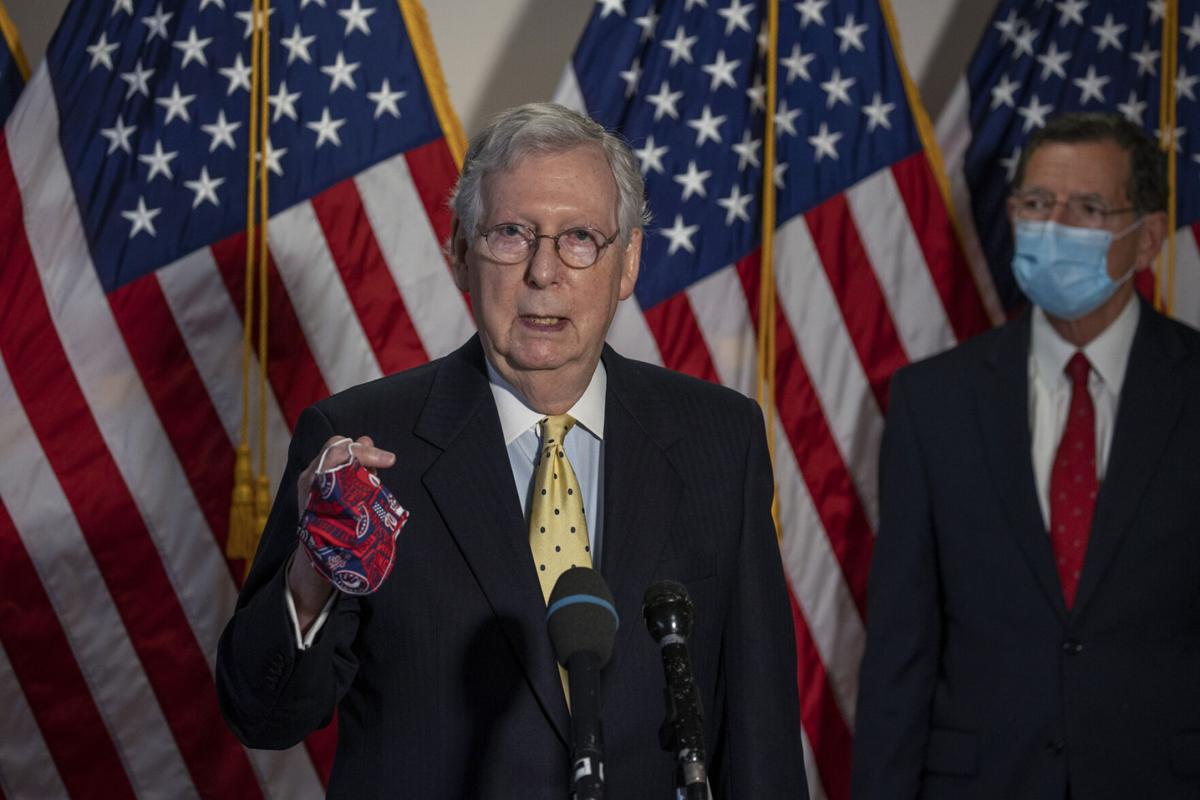 Tasos Katopodis/Getty Images/TNSAbove, In this file photo, Senate Majority Leader Mitch McConnell speaks to the media after weekly policy luncheons on Capitol Hill July 21, 2020 in Washington. The Republican coronavirus relief bill would erect almost insurmountable obstacles to lawsuits by workers who become infected at their workplaces. 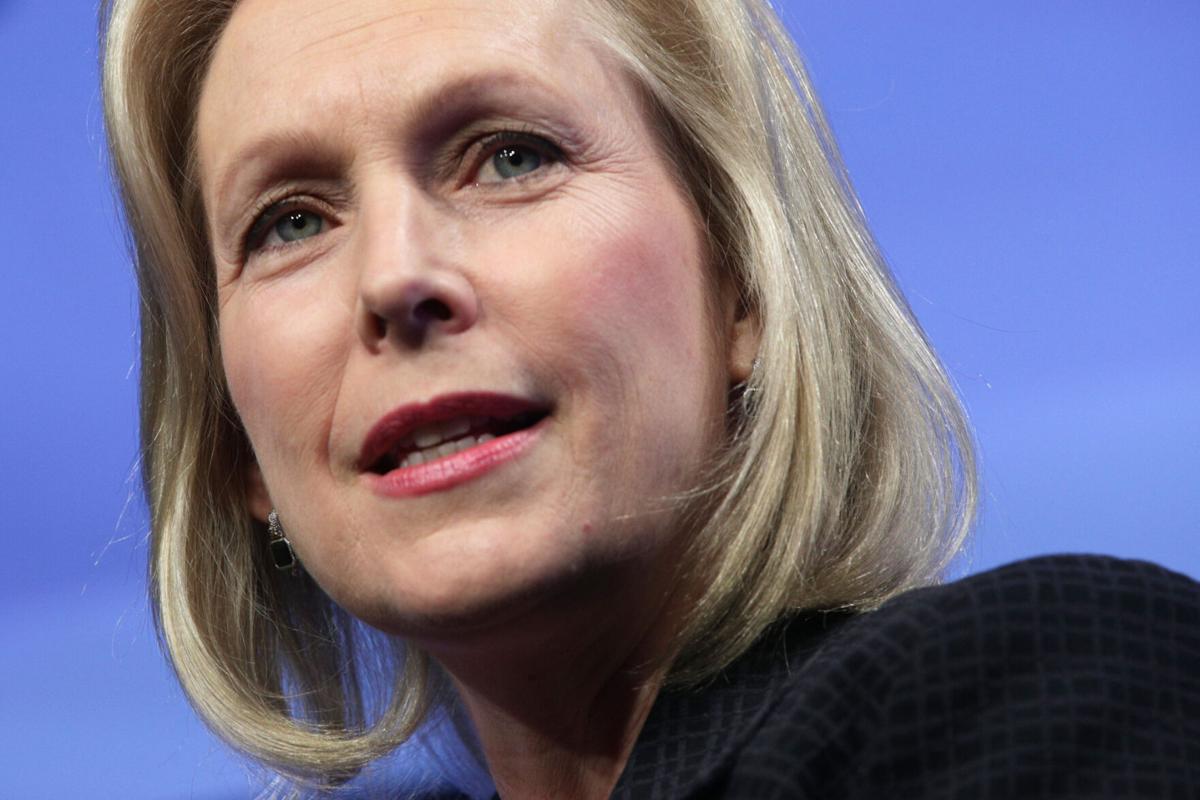 Tasos Katopodis/Getty Images/TNSAbove, In this file photo, Senate Majority Leader Mitch McConnell speaks to the media after weekly policy luncheons on Capitol Hill July 21, 2020 in Washington. The Republican coronavirus relief bill would erect almost insurmountable obstacles to lawsuits by workers who become infected at their workplaces.

WASHINGTON — Enhanced unemployment benefits must be extended through the COVID-19 pandemic, U.S. Sen. Kirsten Gillibrand told Senate Majority Leader Mitch McConnell on Wednesday as the virus surges in most states and territories.

Gillibrand, D-NY, sent a letter to McConnell, R-Ky., asking that the weekly $600 bonus in unemployment benefits continue as Congress clashes over the nation’s next coronavirus relief bill.

Republican senators on Capitol Hill released a two-year, $1 trillion plan — named the HEALS Act — late Monday afternoon to bolster the pandemic-ravaged U.S. economy after House Democrats passed the HEROES Act in May, which extends the unemployment bonus through the end of the year.

Republican lawmakers argue the $600 is so high it serves as a disincentive for employees to return to work; they shrunk the benefit to $200 in the proposal unveiled Monday, sparking outcry from Democrats. The $600 boost expires Friday, heightening the tension between lawmakers and administration officials trying to hammer out a deal.

“Those $600 payments have been keeping families out of poverty, have kept food on the table and have kept the lights on,” Gillibrand said Wednesday during a Zoom press conference calling for the extension. “They have kept the American economy on life support. Now, as the first of the month approaches and rent becomes due, Mitch McConnell wants to pull the plug.”

About 30 million Americans, or 1 in 5 working adults, have lost their jobs during the pandemic with rising unemployment in 49 states, Gillibrand argued. More than 1 million New Yorkers remain out of work.

Unemployment numbers continue to rise as the virus continues to spread in 35 U.S. states, Puerto Rico and the District of Columbia. The nation reported 1,416,000 new unemployment insurance claims in the week ending July 18 — an increase of 109,000 from the previous week.

Gillibrand cited a new Yale study that found no evidence that recipients of more generous benefits, such as the unemployment bonus, were less likely to return to work.

“It’s urgent that the Senate extend these vital unemployment benefits in the next package as unemployment numbers continue to rise in every corner of our country. I’m urging Leader McConnell to act now to provide desperately needed relief for struggling American workers.”

Slashing the unemployment bonus to $200 would cause widespread issues with the technological systems states use to distribute benefits, creating a logjam for Americans to get their checks, the senators said.

“It could take states months to get the money out — people don’t have months to wait,” she added. “A $600 enhancement is simple, it’s efficient, it’s effective — it gets relief to the people who need it. This new Republican plan undermines the efficiency of a flat benefit. At the moment, speed is needed most.”

Unemployment insurance benefits stimulate the economy, with about $2 injected into the economy per $1 received — especially during a recession and through the pandemic. The Economic Policy Institute projects extending the $600 unemployment bonus through the middle of 2021 would provide a 3.7% average quarterly boost to the nation’s Gross Domestic Product and employment of 5.1 million workers.

“We cannot risk losing this projected increase in GDP and related jobs this spending supports due partisan differences,” according to Gillibrand’s letter to McConnell. “With a drastic reduction in UI benefits, fiscally constrained families will be unable to purchase food and rent that will support our economy.”

Families have used the enhanced unemployment bonus for health insurance, utilities, food or to make rent or mortgage payments.

“Now, as the first of the month approaches and the moratorium on evictions set to expire at the end of July, millions of Americans are at risk of being evicted if they are unable to afford rent after receiving their last enhanced unemployment check,” she said. “Congress must include the critical $600 per week unemployment benefit through January 31, 2021 to keep families afloat during this crisis.”

Gillibrand criticized Republicans for “dragging their heels” after the House passed the HEROES Act two-and-a-half months ago.

“Sen. McConnell sent the senators on vacation, and President Donald Trump went golfing,” she said. “McConnell and the White House wasted precious time millions of Americans don’t have to spare only to come up with an unworkable alternative. Now, Americans are fighting amongst themselves.”

The Democratic-ruled House and Republican-controlled Senate continue to clash over who should get federal COVID-19 assistance and providing relief to counties and local governments. The HEROES Act would allocate $875 billion to state and local governments to assist with budget shortfalls brought on by the pandemic. Gillibrand supports funding localities, she said, as local governments make up one-third of the GDP and pay teachers and first responders.

“Those are the least wise cuts during a pandemic,” Gillibrand said. “These are our first responders needed down on the front lines. I hope every senator did hear from their governors and mayors when back in their states. Hopefully, it will be part of the package.”

Bill negotiations are set to continue until the next congressional recess Aug. 7.

Trump and Treasury Secretary Steven Mnuchin on Wednesday sharpened their focus on getting a deal done by Friday that could include a short-term extension of enhanced unemployment insurance and blocking evictions for the duration of the pandemic.

“We’re looking at a deadline of this Friday,” Mnuchin told reporters outside the White House. “The president is very focused on evictions and unemployment.”

Trump and Mnuchin hinted that it’s possible a short-term deal including a second round of stimulus checks, which has bipartisan support, and extensions of the $600 weekly unemployment bonus and federal moratorium on evictions could come this week before a comprehensive package is finalized.

For People Living with Follicular Lymphoma, Routine Medical Check-ins are a Must—Here’s Why

Facing Prostate Cancer with the Help of Precision Medicine

How to find a retirement community that’s right for you

Holiday hints: Gift wrapping and shipping tips from the experts

5 ways to keep healthy habits on track around the holidays