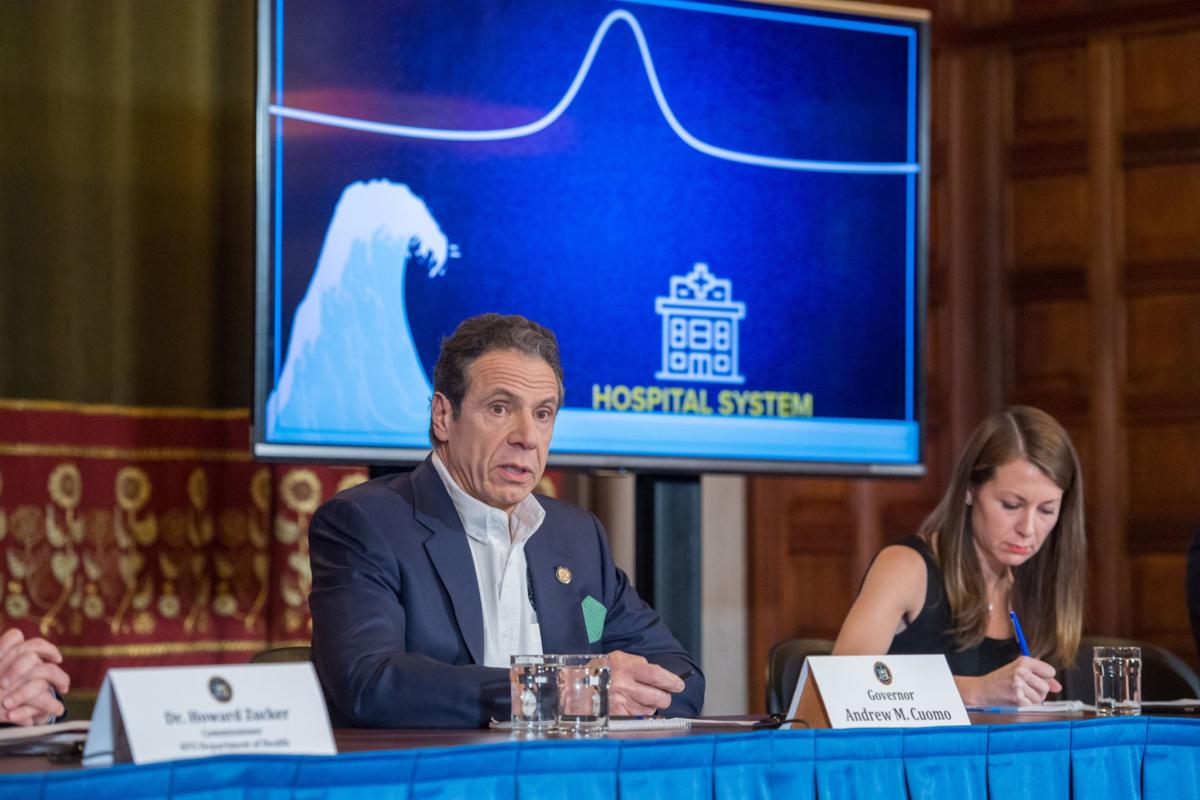 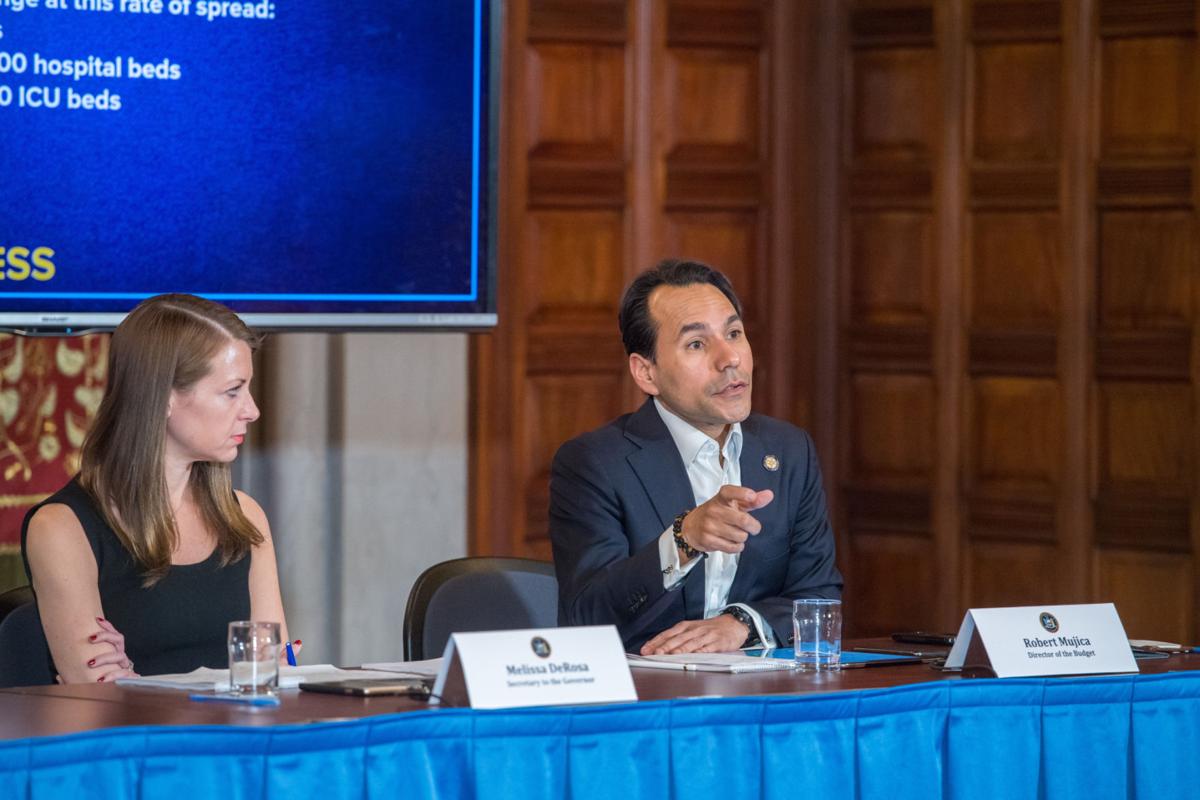 Courtesy of Gov. Andrew Cuomo’s office State Budget Director Robert Mujica said the governor’s $87.9 billion executive budget is projected to be $4 to $7 billion short because of the negative impact the spread of COVID-19 is having on the state and national economy.

Courtesy of Gov. Andrew Cuomo’s office State Budget Director Robert Mujica said the governor’s $87.9 billion executive budget is projected to be $4 to $7 billion short because of the negative impact the spread of COVID-19 is having on the state and national economy.

ALBANY — The state halted collecting medical and student debt for 30 days Tuesday and next year’s proposed state budget is projected to have a $4 billion to $7 billion revenue shortfall amid the spreading coronavirus pandemic as Gov. Andrew Cuomo called for national unity to fight it.

The governor’s office did not respond to multiple requests for comment about the residents’ ages and hometowns as of press time Tuesday. At least seven of the 12 deaths were senior citizens with underlying conditions and took place in downstate or New York City hospitals, Department of Health Commissioner Dr. Howard Zucker said Monday.

State Comptroller Thomas DiNapoli reissued a revenue projection Tuesday for the state’s 2020-21 budget, which the Legislature is tasked to amend and adopt by April 1.

On March 10, Cuomo asked DiNapoli to reassess the state’s proposed $178 billion executive budget after COVID-19 wreaked havoc on the local and national markets. The executive budget forecast could be $4 billion to $7 billion below the state’s original $87.9 billion projections, DiNapoli said, because the virus will likely serve as the catalyst for a mild to deep recession.

“Significant fluctuations with an overall downward trend in economic conditions continue on a daily basis, contributing to an extraordinarily high level of uncertainty looking forward,” according to a letter to Cuomo from DiNapoli dated Tuesday. “...The current economic challenge serves as a reminder that the state must make a firm and ongoing commitment to strengthening its rainy day reserves.

“Economic forecasters are currently unable to rule out a more severe recession or sharper stock market declines,” DiNapoli continued. “If either occurs, the revenue outlook could be significantly worse.”

Cuomo does not expect lawmakers to delay passing the state’s proposed budget by the April 1 deadline, he said, or to sacrifice reaching an agreement on major issues such as the recreational legalization of marijuana, bail reform or Medicare.

“Given the growing uncertainty, limited information available in the middle of the unfolding crisis and need to support the response, the governor and Legislature should adopt a crisis-response ‘bare bones’ budget for the fiscal year beginning April 1, 2020, recognizing that changes will be needed in the coming months,” according to a statement Tuesday from Citizens Budget Commission President Andrew Rein.

The state will stop collecting medical and student debt for at least 30 days from March 16 through April 15 in response to growing financial impairments resulting from COVID-19, according to a statement Tuesday from state Attorney General Letitia James.

James’ office will reassess the need for an extension after the 30-day period expires.

“In this time of crisis, my office will not add undue stress or saddle New Yorkers with unnecessary financial burden,” James said. “New Yorkers need to focus on keeping themselves safe and healthy from the coronavirus, and therefore can rest assured that state medical and student debt referred to my office will not be collected against them for at least 30 days. This is the time when New Yorkers need to rally around each other and pick each other up, which is why I am committed to doing everything in my power to support our state’s residents.”

Debt that could fit the criteria for suspension include: Patients who owe medical debt to one of the five state hospitals or the five state veterans’ homes, students who owe debt to State University of New York campuses and individual debtors, sole proprietors, small business owners and certain homeowners who owe debt relating to oil spill cleanup and removal costs, property damage and breach of contract, as well as other fees to state agencies.

The policy automatically suspends interest accrual and collecting fees on all outstanding state medical and student debt referred to the attorney general’s office, according to James.

For several days, Cuomo has called on President Donald Trump and the federal government to take comprehensive action to maximize hospital beds and available intensive care by deploying the U.S. Army Corps of Engineers to leverage its equipment and staff to retrofit existing facilities — such as military bases or college dormitories — to serve as temporary medical centers.

The federal government did not accept or decline the request, the governor said Tuesday. In the meantime, Cuomo issued an executive order Monday to allow the state to increase hospital capacity by constructing temporary medical centers before hospital beds are overwhelmed with coronavirus patients.

Cuomo said he speaks to Trump and Vice President Mike Pence daily about the public health crisis, and thanked them for their team’s work on responding to the pandemic.

The governor said he realizes the closures have caused disruptions for business owners and their patrons.

“If you are upset about what we have done, be upset at me,” Cuomo said. “These are all state-ordered rules. I know businesses will be hurt by this. I know we’re going to have to then deal with that issue as soon as this immediate public health issue is over, but my judgment is do whatever is necessary to contain this virus and then we will manage the consequences afterwards.”

By law, no city in the state will close down or quarantine without the governor’s approval.

“I have no interest to quarantine any city,” he added. “Nobody was contained in New Rochelle — you could come and go as you wanted.”

The governor also announced the Legislature passed a Paid Sick Leave bill Tuesday to guarantee job protection and pay for all New Yorkers quarantined or impacted by COVID-19. The state will provide two weeks of paid leave for quarantined state workers.

The state’s testing capacity is expected to reach 6,000 per day this week with the opening of three additional drive-through mobile testing facilities. One opened in Nassau County on Tuesday. Others will open in Suffolk and Rockland counties and on Staten Island this week.

The Greater New York Hospital Association and Healthcare Association of New York State are working to develop a plan to create drop-in child care and expand hospital childcare facilities. The state is contacting retired nurses and doctors to supplement medical personnel at hospitals, according to a statement from the governor’s office.

Albany County has 25 confirmed cases of COVID-19, County Executive Dan McCoy said in an updated statement Tuesday — up from 15 positive cases Monday. The cases span a range of ages, McCoy said, including a 7-year-old.

As of early Tuesday afternoon, the state had tested 10,049 people with the following numbers in the top 10 counties: 4,000 people tested in New York City; 3,084 in Westchester County; 615 in Nassau County; 454 in Suffolk County; 421 people in Albany County; 282 in Saratoga County; 163 in Schenectady County; 149 in Rensselaer County; 123 in Orange County and 122 people tested in Rockland County, according to the governor’s office.