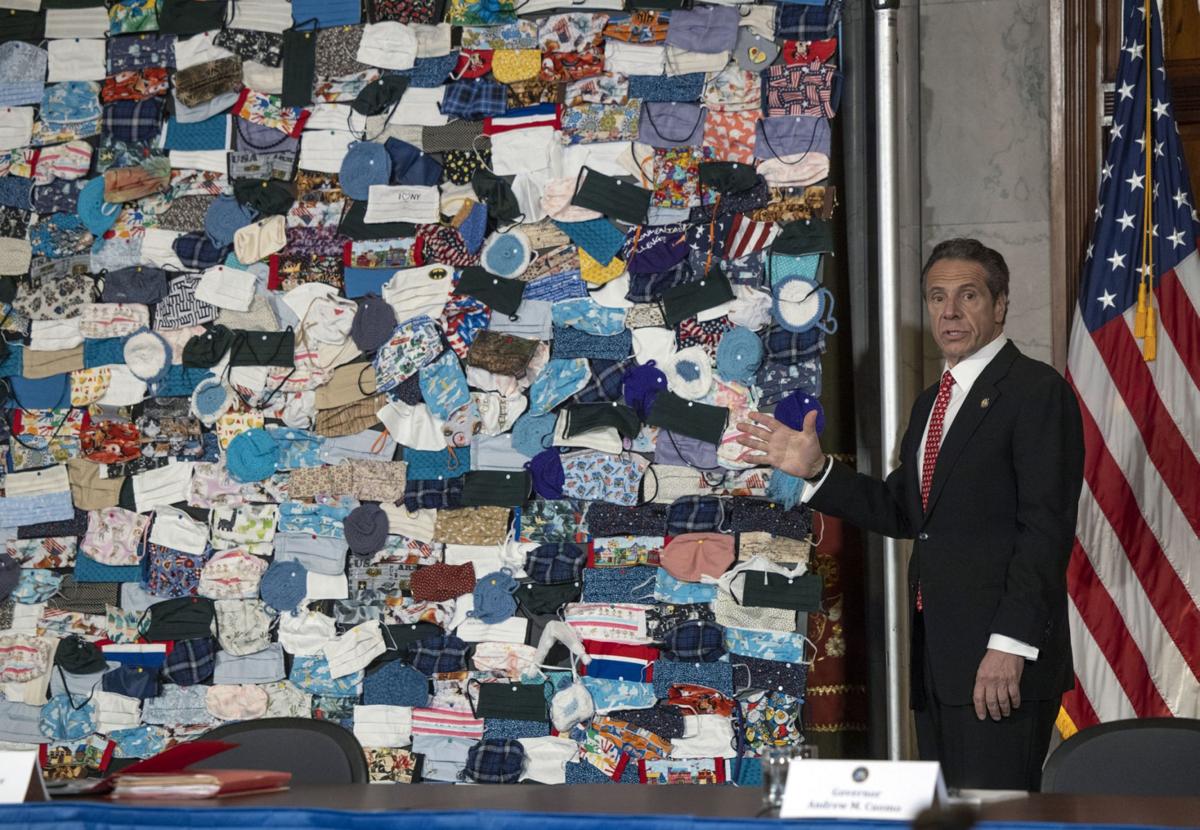 Courtesy of Gov. Andrew Cuomo’s office Gov. Andrew Cuomo reveals a wall of several hundred masks Americans from across the nation have mailed to help New York, which remains the country’s epicenter of COVID-19 cases. 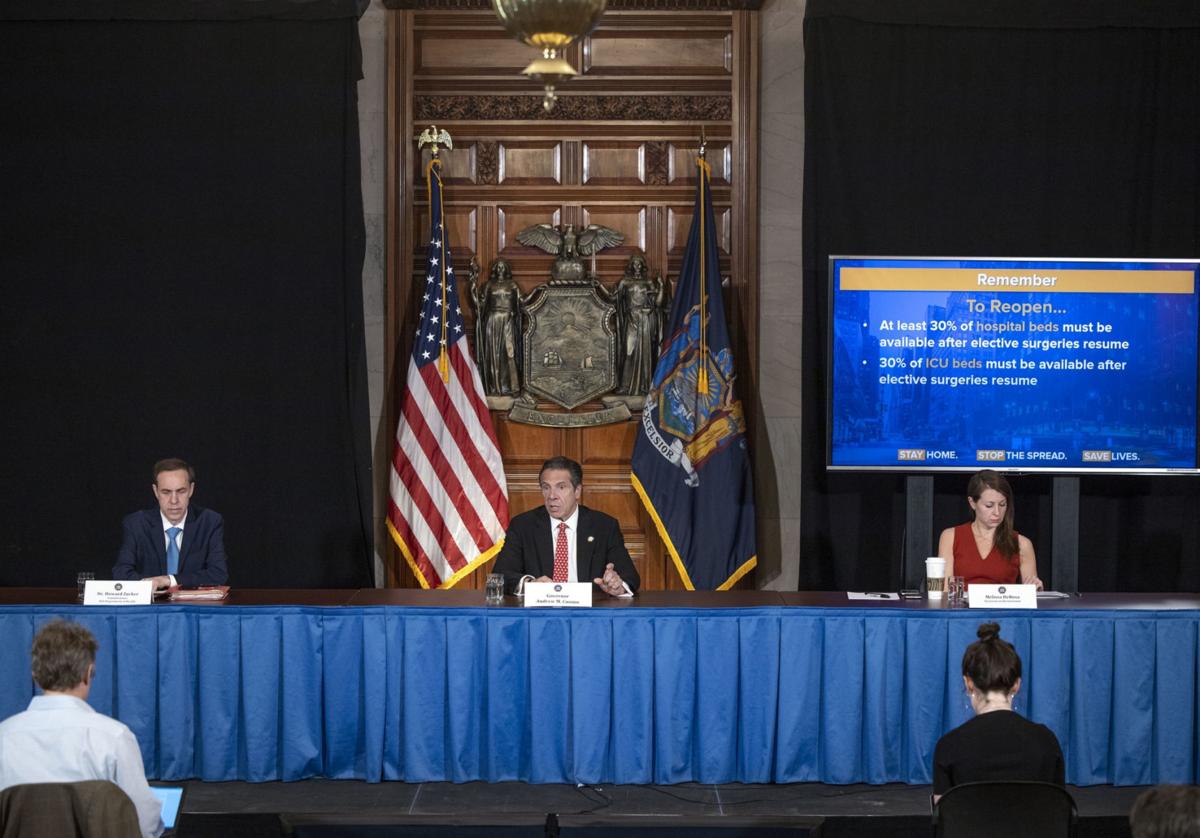 Courtesy of Gov. Andrew Cuomo’s office Elective surgeries will resume in 35 counties statewide and about 17% of downstate essential workers and first responders have coronavirus COVID-19 antibodies, Gov. Andrew Cuomo said during a pandemic briefing Wednesday in the state Capitol.

Courtesy of Gov. Andrew Cuomo’s office Gov. Andrew Cuomo reveals a wall of several hundred masks Americans from across the nation have mailed to help New York, which remains the country’s epicenter of COVID-19 cases.

Courtesy of Gov. Andrew Cuomo’s office Elective surgeries will resume in 35 counties statewide and about 17% of downstate essential workers and first responders have coronavirus COVID-19 antibodies, Gov. Andrew Cuomo said during a pandemic briefing Wednesday in the state Capitol.

Additional state and local funding from Washington is essential as New York faces between a $13 billion and $15 billion budget shortfall and expects to slash school district and hospital spending by 20%.

Last week, Senate Majority Leader Mitch McConnell, R-Ky., spoke out against such a “blue-state bail out” bill and suggested states declare bankruptcy. Congressional aid to state and local governments would not be a “bail out,” said Cuomo, who argued Democratic states like New York put more into the federal budget than Kentucky or Florida.

New York gives $29 billion more in federal spending than it receives while Kentucky receives $37 billion and Florida $30 billion more from the federal government than either pay in federal taxes, according to the governor’s office.

Scott’s statements divide Americans with an “us versus them” mentality, the governor said.

“Who is ‘we’ and who is ‘them?’” Cuomo said. “Them, the people who had coronavirus... we, without the virus, are supposed to bail out those people who have the virus? What an ugly sentiment.

“New York bails them out every year. They’re not bailing us out. ... How dare they? How long are you going to play the American people and assume they’re stupid? They are numbers, and they are facts, and they can’t be distorted.”

State Assembly Speaker Carl Heastie and other assembly members in the Democratic majority sent a letter to New York’s congressional delegation Wednesday calling on it to support unrestricted aid to state and local governments to combat COVID-19.

The state will follow Centers for Disease Control and Prevention guidance for a region to begin a phased reopening after a 14-day decline in COVID-19 hospitalizations. Construction and manufacturing industries will be the first to reopen. Other businesses will reopen on a rolling, two-week basis.

Businesses must come up with new protocols to maintain social distancing and reduce density before reopening and regions must develop a testing regimen and tracing system to prioritize testing symptomatic people and essential workers.

The state continues to test more than anywhere across the globe, according to the governor’s office.

Cuomo ordered the Metropolitan Transportation Authority to come up with a new cleaning plan by the end of Thursday, April 30, to disinfect each subway train car every night after The New York Daily News featured a front-page photo Tuesday of several homeless people and towers of their belongings crowding New York City subway cars.

Elective surgeries will resume in 35 New York counties, but Columbia County was left off the list.

Cuomo pleaded for political unity and funding for state and local governments as federal lawmakers negotiate the next COVID-19 relief bill.

The governor signed an executive order Wednesday allowing 35 of the state’s 62 counties to resume elective surgeries.

Columbia County has not met the requirements. Elective outpatient surgeries and treatments will resume in hospitals with capacity over 25% and if the county in which the hospital is located has seen fewer than 10 new coronavirus hospitalizations over the past 10 days. Elective treatment will cease in hospitals or counties that resumed elective treatment and have a surge in virus cases and exceeds those thresholds.

A region must have at least 30% hospital beds and Intensive Care Unit beds available after elective surgeries resume and show no statistically significant increase in COVID-19 hospitalizations or positive cases to reopen.

“We have made tremendous progress to stop the spread of this infection, but we are not out of the woods yet and we need to proceed with caution as we begin our reopening plan,” Cuomo said.