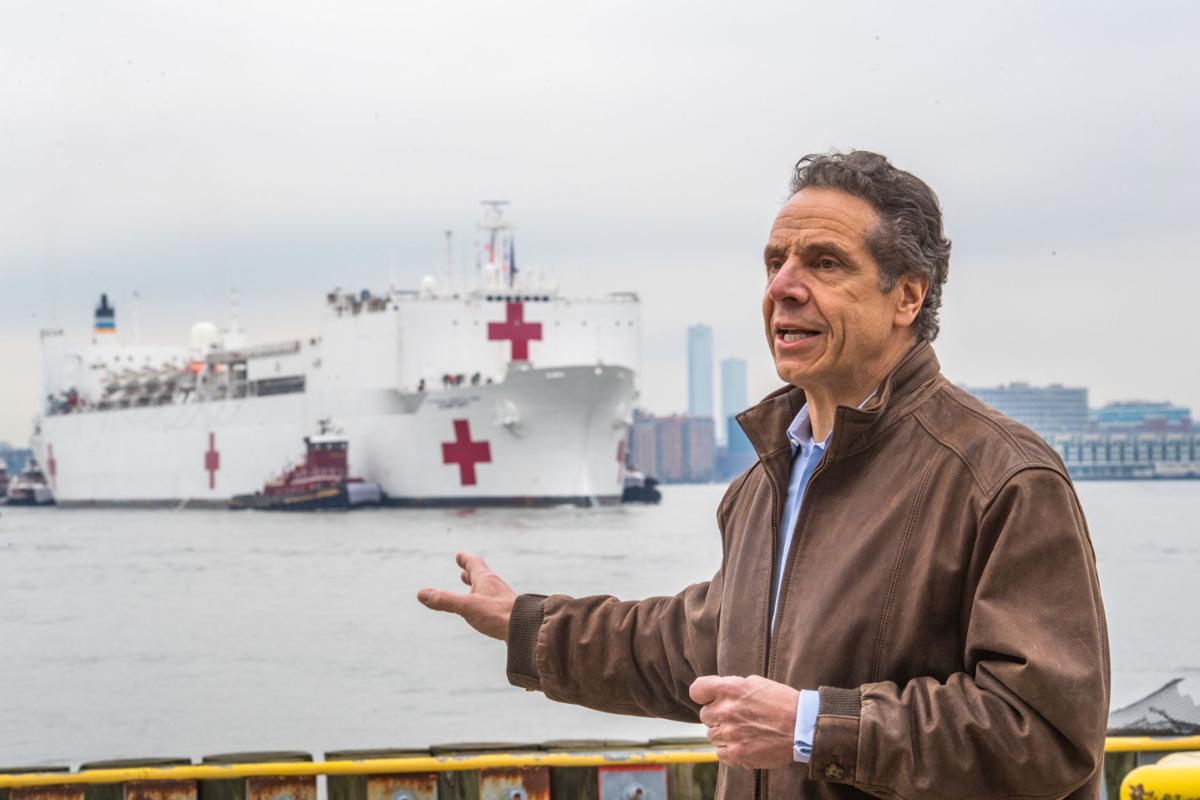 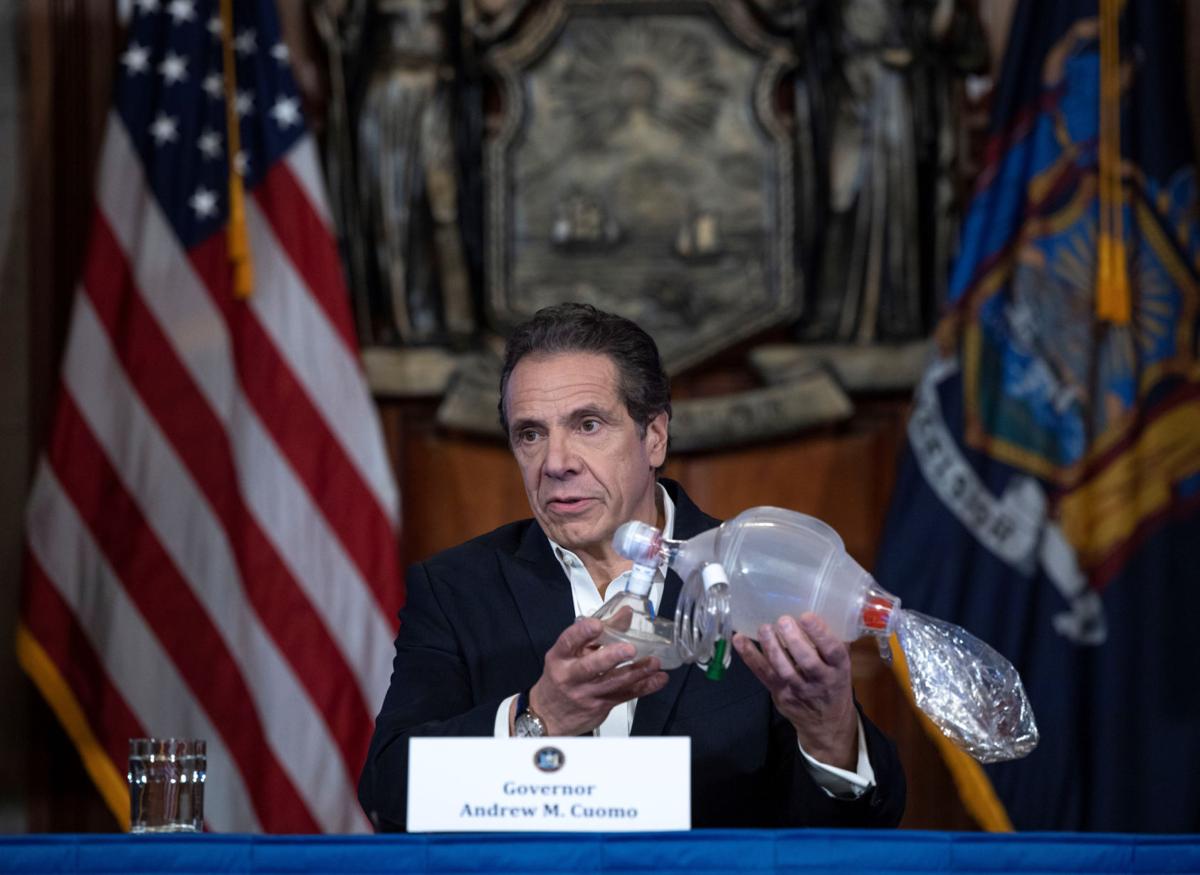 Courtesy of Gov. Andrew Cuomo’s office Gov. Andrew Cuomo demonstrates how to circulate oxygen flow with a bag valve mask during a COVID-19 press briefing in the state Capitol on Saturday afternoon. Bag valve masks serve as a manual ventilator, the governor said, but are inefficient and have to be hand-pumped 24 hours a day. Cuomo said the state needs 40,000 total ventilators before the virus apex, or peak, hits within the next three weeks. 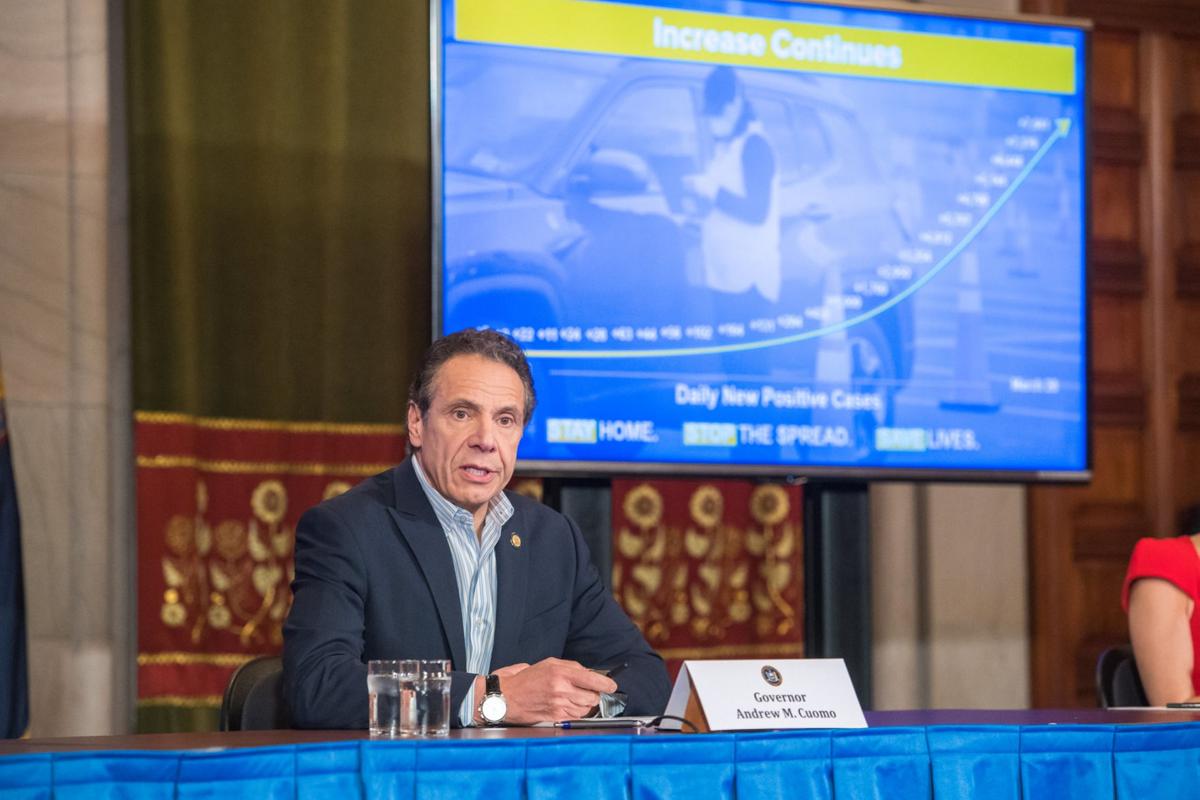 Courtesy of Gov. Andrew Cuomo’s officeGov. Andrew Cuomo plans to move forward with the state’s plans to cut $2.5 billion to its Medicaid program and forego up to $6 billion in COVID-19 relief from the federal government, he said Sunday afternoon during a coronavirus COVID-19 press briefing at the state Capitol in Albany.

Courtesy of Gov. Andrew Cuomo’s office Gov. Andrew Cuomo demonstrates how to circulate oxygen flow with a bag valve mask during a COVID-19 press briefing in the state Capitol on Saturday afternoon. Bag valve masks serve as a manual ventilator, the governor said, but are inefficient and have to be hand-pumped 24 hours a day. Cuomo said the state needs 40,000 total ventilators before the virus apex, or peak, hits within the next three weeks.

Courtesy of Gov. Andrew Cuomo’s officeGov. Andrew Cuomo plans to move forward with the state’s plans to cut $2.5 billion to its Medicaid program and forego up to $6 billion in COVID-19 relief from the federal government, he said Sunday afternoon during a coronavirus COVID-19 press briefing at the state Capitol in Albany.

NEW YORK — Gov. Andrew Cuomo called for political and national unity Monday to fight the coronavirus after President Donald Trump said over the weekend he may order an enforceable quarantine for New York and surrounding areas in New Jersey and some parts of Connecticut as the pandemic continues to spread.

The state’s first Columbia County resident died of COVID-19 on Saturday, according to a statement from the county health department. The elderly resident had COVID-19 with multiple underlying conditions. Albany County also had its first virus-related death, according to a statement from County Executive Dan McCoy’s office. An elderly man with several underlying conditions and COVID-19 died Saturday at St. Peter’s Hospital.

Columbia County had 36 positive cases of the virus as of Monday afternoon. Six remain hospitalized with two patients in intensive care. Sixty-nine people are under mandatory quarantine and 17 under precautionary quarantine. Nine residents have suspected cases, but have not been tested.

Greene County has 20 positive cases of COVID-19 in Windham, Durham, Greenville, Hunter, Cairo, Catskill, Athens and Coxsackie as of Monday afternoon. One person was hospitalized, but was released. Four cases have been cleared and discharged, with 16 remaining active cases, according to a statement from Greene County Public Health. Eighty-seven people remain under precautionary quarantine being self-monitored for possible exposure.

Greene County extended its emergency orders Monday declaring a state of emergency and closing all schools and senior centers through midnight Saturday, April 4.

Cuomo called for unity to combat the pandemic Monday, saying Trump referred to COVID-19 as “a war.”

“This is not a time for politics, partisanship or division,” Cuomo said. “If there is division at this time, the virus will defeat us.

Meanwhile, a quarantine of some kind is being weighed for New York City and parts of the surrounding region.

“We’re looking at it and will be making a decision,” Trump told reporters Saturday before boarding Air Force One to Norfolk, Virginia, to visit the a U.S. Navy hospital ship the USNS Comfort before it departed for New York. “A lot of the states that are infected...they’ve asked me if I’d look at it so we’re going to look at it.

“It would be for a short time,” he said. “This would be an enforceable quarantine. And, you know, I’d rather not do it, but we may need it.”

The additional 3,500 beds will not be used to treat COVID-19 patients, but will assist with anticipated hospital overflow, Cuomo said.

“It will be a relief valve for hospitals that are struggling now that are over capacity all across the city,” the governor said from Pier 88 on Monday with the vessel behind him. “About 3,500 beds to relieve the stress that our hospital system is facing.”

Cuomo announced a statewide public-private hospital plan to fight COVID-19 on Monday from the Javits Center. As part of the plan, public and private hospitals from across the state agreed to implement a balanced approach to fight the virus where hospitals approaching or exceed capacity can transfer patients to other hospitals that are not as full. The hospital systems across the state have also agreed to share supplies, staff and other resources.

Cuomo issued an executive order Saturday to delay New York’s presidential primary from April 28 to June 23 with the congressional and legislative primaries amid the spreading pandemic.

The governor issued another executive order to move the state’s personal and corporate tax filing deadline to July 15.

Cuomo extended Sunday the executive order to require all nonessential employees to stay home through April 15. The order will be reassessed every two weeks.

Cuomo was surprised by Trump’s suggested travel restrictions and immediately expressed disapproval of the idea.

“I don’t know how that could be legally enforceable,” Cuomo said during a press conference Saturday afternoon in the state Capitol in Albany. “...Not even understanding what it is, I don’t like the sound of it.”

Trump added he would not order the closure of the subway system in the nation’s largest city, which is home to 8.6 million people, reflecting the quarantine would be aimed at stopping the spread beyond the tri-state area.

“Some people would like to see New York quarantined because it’s a hot spot — New York, New Jersey maybe one or two other places, certain parts of Connecticut quarantined,” Trump said at the White House before boarding Marine One. “I’m thinking about that right now. We might not have to do it, but there’s a possibility that sometime today we’ll do a quarantine — short-term — two weeks for New York, probably New Jersey, certain parts of Connecticut.”

“I don’t think the order was called for,” Cuomo said during a press briefing in Albany on Sunday. “I don’t believe it was legal. I don’t believe it was neighborly. I understand the point, but I thought there were different ways to do it. The governor of Rhode Island was very receptive and I thank her very much for reconsidering her position.”

Raimondo amended the order Sunday to include all 49 other states.

At 66,497 positive cases Monday, New York has roughly half of the nation’s confirmed cases of the coronavirus that has swept the globe.

Just over 14% of positively infected New Yorkers are hospitalized, or 9,517 people, with 2,352 patients in the intensive care unit.

The state reported a total of 1,218 virus-related deaths Saturday afternoon — up from 965 Sunday and 519 Friday.

The state’s most dense virus hot spots have remained downstate and in New York City. As of Sunday, the virus has been detected in 55 counties, including the city, with 33,768 positive cases in New York City, 8,519 cases in Westchester County, 6,445 in Nassau County, 5,023 cases in Suffolk County, 2,209 in Rockland County and 199 in Albany County.

To see the complete county breakdown of positive COVID-19 cases and deaths statewide, view the COVID-19 map and tracker at hudsonvalley360.com/site/covid19.html.