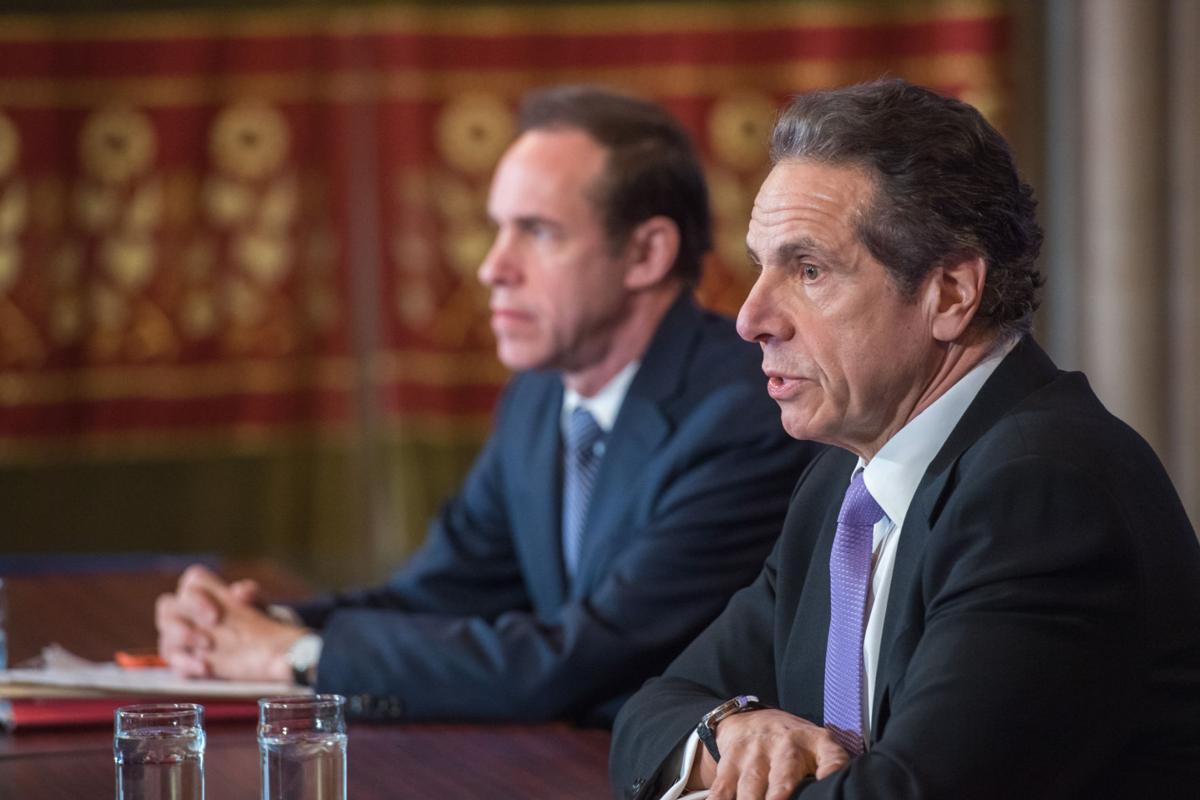 Courtesy of Gov. Andrew Cuomo’s officeThe federal government dispatched the USNS Comfort hospital ship, which has about 1,000 rooms aboard, to the state Wednesday, Gov. Andrew Cuomo said during a coronavirus COVID-19 press briefing in the state Capitol. The ship will be docked in the New York Harbor.

Courtesy of Gov. Andrew Cuomo’s officeThe federal government dispatched the USNS Comfort hospital ship, which has about 1,000 rooms aboard, to the state Wednesday, Gov. Andrew Cuomo said during a coronavirus COVID-19 press briefing in the state Capitol. The ship will be docked in the New York Harbor.

ALBANY — As the federal government sends a hospital ship to the New York Harbor, Gov. Andrew Cuomo issued an executive order Wednesday to restrict at least 50% of the state’s workforce from leaving home as the COVID-19 pandemic continues to spread.

The federal government is sending a hospital ship to the state, the USNS Comfort, which has about 1,000 rooms aboard, which will be docked in New York Harbor, Cuomo announced Wednesday afternoon.

“Hospital beds are what we need,” he said.

Cuomo announced the order during a press conference late Wednesday morning at the state Capitol. The new regulation prohibits more than 50% of employees to leave home except for essential services including food, pharmacies, health care, shipping, supplies and media, the governor said.

“This is a public health crisis,” Cuomo said. “Once we get past that, we’ll deal with the economic crisis.”

Pennsylvania is joining New York’s regional agreement with New Jersey and Connecticut to close all restaurants, bars, theaters, casinos and movie theaters except for takeout and delivery, Cuomo said Wednesday.

Officials did not release the state’s updated number of fatalities Wednesday.

Since the state’s first confirmed case March 1, 108 people have recovered and been discharged from the hospital.

“You do build up an immunity to COVID-19,” Zucker said, adding anyone who has recovered from the illness is considered “out of the woods” to become reinfected a second time.

Albany County has 41 confirmed cases of COVID-19, County Executive Dan McCoy said in an updated statement Wednesday — up from 25 positive cases Tuesday. The cases span a range of ages and professions, McCoy said, including a 7-year-old and an Albany County Sheriff’s deputy.

Westchester County was the state’s largest COVID-19 “hot zone” for the past two weeks, which mainly spread in the community from a 50-year-old attorney who tested positive March 3. The cluster has reduced after efforts to reduce the density with a one-mile containment zone in the city of New Rochelle and the opening of a six-lane, drive-through testing center March 13.

As of early Wednesday afternoon, the state had tested more than 14,000 people for the virus. COVID-19 tests continue to be prioritized for the most vulnerable members of the population, including senior citizens, people with compromised immune systems or underlying conditions, Cuomo said.

“We know what this virus does,” the governor said. “What’s worse than the virus is the rumors... [about] quarantine. People will get ill, but they will resolve. People who are vulnerable is where we have to be careful. But the panic and the fear is wholly disconnected from the reality.”

On March 10, Cuomo asked DiNapoli to reassess the state’s proposed $178 billion executive budget after COVID-19 wreaked havoc on the local and national markets. The executive budget forecast could be $4 billion to $7 billion below the state’s original $87.9 billion projections, DiNapoli said, because the virus will likely serve as the catalyst for a mild to deep recession.

Cuomo does not expect delays in lawmakers amending and adopting the 2020-21 executive budget by the April 1 deadline, he reiterated Wednesday.

“If they want to do it sooner, great, but the date is April 1,” Cuomo said. “Government is functioning. Police officers and nurses are doing their job... A lot of people are putting themselves in harm’s way.

“This is public service,” the governor added. “We’ll be here doing our job. If they want to do the budget early, fine, but April 1 is the deadline.”

For several days, Cuomo has called on President Donald Trump and the federal government to take comprehensive action to maximize hospital beds and available intensive care by deploying the U.S. Army Corps of Engineers to leverage its equipment and staff to retrofit existing facilities — such as military bases or college dormitories — to serve as temporary medical centers.

The federal government neither accepted nor declined the governor’s request to mobilize the U.S. Army Corps of Engineers. Cuomo issued an executive order Monday to allow the state to increase hospital capacity by constructing temporary medical centers before hospital beds are overwhelmed with coronavirus patients.

The state, nation and every country across the globe are scrambling for more ventilators, Cuomo said. Officials brought out a ventilator during Wednesday’s COVID-19 briefing.

“This is a respiratory illness,” the governor said. “The ventilators actually help people breathe... it’s just the number that we need is much higher. We can create more beds, but it’s literally the supply of ventilators that is a national need.”

“I don’t believe any [shelter-in-place] policy works unless the geographic footprint is large enough,” he added.