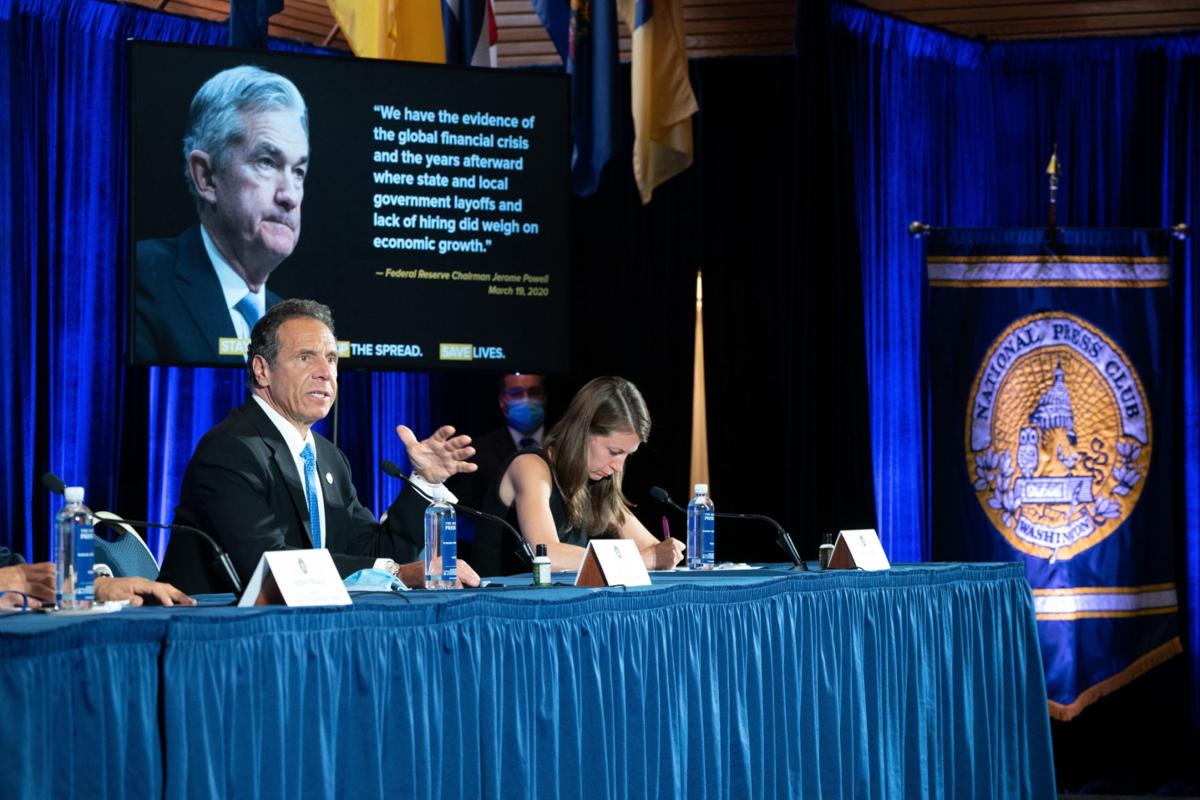 Courtesy of Gov. Andrew Cuomo’s office/File photoGov. Andrew Cuomo pleads during a pandemic briefing at the National Press Club in Washington, D.C., for federal lawmakers to pass COVID-19 legislation to assist state and local governments during the pandemic. The state Department of Health is investigating COVID-19 exposure in four virus clusters after officials traced multiple new infections to a student who recently traveled to Florida and attended a downstate graduation ceremony. 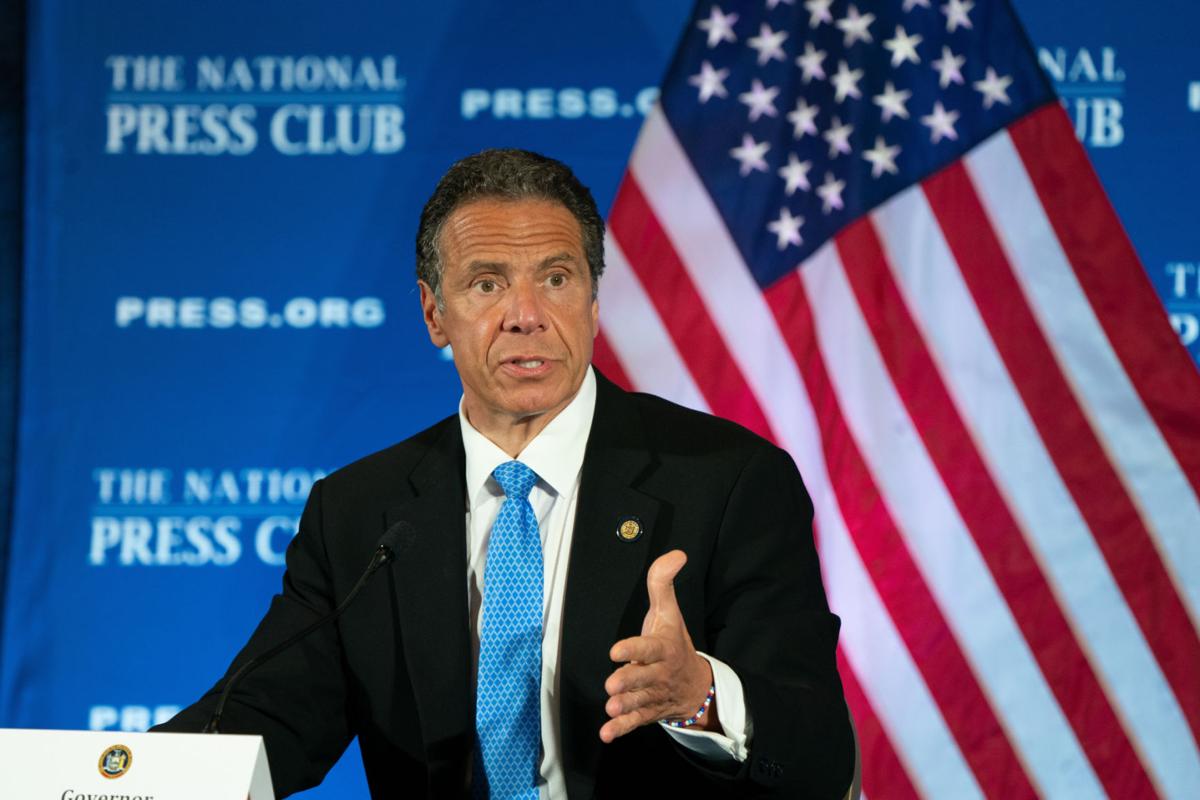 Courtesy of Gov. Andrew Cuomo’s office/File photoGov. Andrew Cuomo pleads during a pandemic briefing at the National Press Club in Washington, D.C., for federal lawmakers to pass COVID-19 legislation to assist state and local governments during the pandemic. The state Department of Health is investigating COVID-19 exposure in four virus clusters after officials traced multiple new infections to a student who recently traveled to Florida and attended a downstate graduation ceremony.

WASHINGTON — After a late-morning meeting with President Donald Trump, Gov. Andrew Cuomo spent his Wednesday COVID-19 briefing railing against federal lawmakers for politicizing the decision to fund state and local governments amid the coronavirus pandemic.

Trump and the governor had an agreeable meeting Wednesday about projects to recharge the state and national economies, Cuomo said, adding the pair worked to put politics aside during the COVID-19 crisis. They last met at the White House on April 21.

“There will be a time to wear our political differences — not now,” Cuomo said Wednesday afternoon at the National Press Club. “The meeting we just had was the same way. He [Trump] was not about politics. It was not about any of that.”

Over the past several days, the governor has suggested major infrastructure-improvement projects to create thousands of jobs as states and regions reopen. Cuomo on Wednesday requested accelerated approval of plans for large-scale projects, such as renovating the crumbling cross-Hudson tunnels, expanding the 2nd Avenue Subway system or constructing a LaGuardia Airport airtrain, which require federal oversight.

The projects would benefit the Northeast region, said Cuomo, who has compared the upgrades to the thousands of American workers who built the Hoover Dam between Nevada and Arizona or the 1.5-mile Lincoln Tunnel during the Great Depression.

“Now is the time to stimulate the economy by doing the construction and doing that growth,” Cuomo said. “This nation was smart enough to do it before...Build them now. Supercharge the reopening. Grow the economy. That’s what we would do if we were smart.

“At least build things we can leave our children like our grandparents did.”

Congress’ fifth House-passed $3 trillion COVID-19 bill, known as the HEROES Act, sits in the U.S. Senate. The bill would provide billions in assistance to states and repeals the controversial State And Local Tax deduction, which allowed taxpayers of high-tax states to deduct local tax payments on their federal tax returns.

Trump is focused on reopening and stimulating the economy, Cuomo said, and would not give more details about the president’s stance on the HEROES Act or their conversation about the legislation.

Cuomo supports the bill, and has pleaded for federal lawmakers to provide coronavirus assistance to state and local governments for more than two months.

“It’s not a Democratic virus — it’s not a Republican virus,” Cuomo said. “...This hyper-partisan Washington environment is toxic for this country.

“If Washington doesn’t pass a bill, I would say to all of them, don’t bother going home. You will really have done a disservice to the fundamental premise of your office.”

The state saw 74 virus-related deaths Tuesday, including 48 in hospitals and 26 in nursing homes. New York’s COVID-19 death rate is on a decline after totaling 73 fatalities Monday, 96 Sunday and 109 Saturday.

The state tested 1,811,544 people by Wednesday, revealing 364,965 total positive cases of the virus. New York’s hospitalization rates continued a downward trend to 4,208 patients, according to the governor’s office.

State Legislature reconvened session after nearly two months Wednesday with intent to pass coronavirus legislation. As of press time, state senators passed measures to ensure water services cannot be shut off during the pandemic, to include audio- or video-only telemedicine services as eligible for reimbursement, to allow for remote board meeting procedures and permitting the remote purchase of cemetery lots, among others.

New York has a $13.3 billion budget shortfall and expects a $61 billion hole over four years because of unforeseen pandemic spending and revenue loss. Without federal aid, the governor and state Budget Director Robert Mujica have said New York will be forced to cut up to 20% in spending to schools, hospitals and localities.

“There can be no national recovery if state and local governments are not funded,” he added. “There is no nation without the states. They seem to forget that in this town.”

Congressional aid to state and local governments would not be a “bail out,” a frustrated Cuomo repeated Wednesday, arguing Democratic states like New York put more into the federal budget than Kentucky or Florida. New York gives $29 billion more in federal spending than it receives while Kentucky receives $37 billion and Florida $30 billion more from the federal government than either pay in federal taxes, according to the governor’s office.

“The conservatives want to argue against redistribution of wealth — that’s exactly what you have done every year,” Cuomo said. “Take from the rich, give to the poor. That’s redistribution. Sen. McConnell, Sen. Scott... you’re the ones taking more than others. The great hypocrisy.”

“We have to get to a point if, only for a moment in response to a national crisis, we say it’s not red and blue — it’s red, white and blue,” Cuomo said.

Cuomo pushed his proposed Americans First Law, which prohibits corporations receive federal coronavirus funding if they do not rehire its same number of employees as before the pandemic. The governor first proposed the law May 10.

An Unexpected Diagnosis – the Risks of Underestimating Non-Melanoma Skin Cancer

The push to the suburbs drives demand for smaller, flexible space away from cities

Tips for Making Safe Digital Payments during the Pandemic

To beat COVID-19, science must lead the way: An inside look at the development of a vaccine

5 tips to financially prepare for college this fall