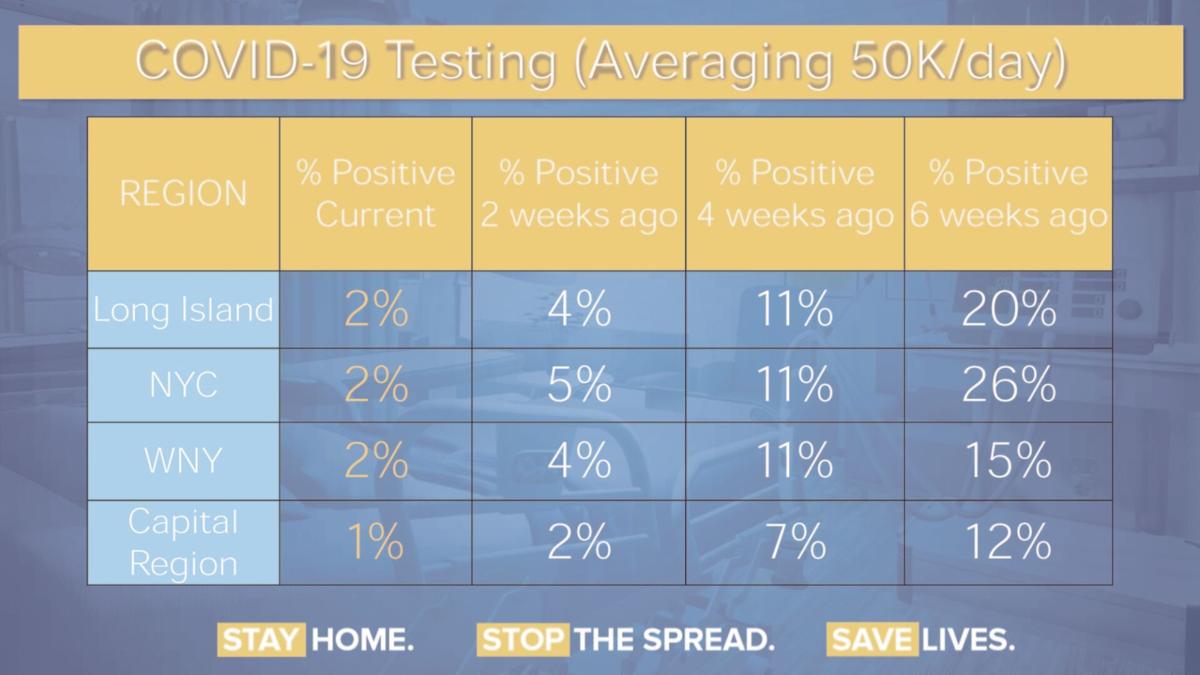 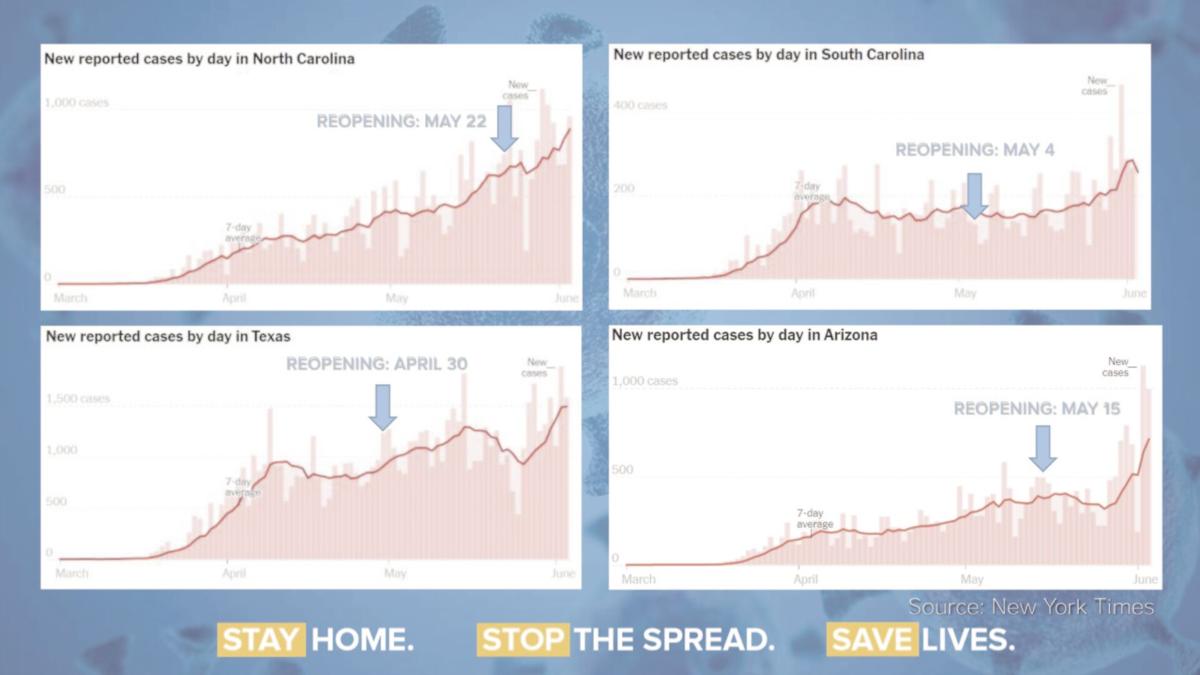 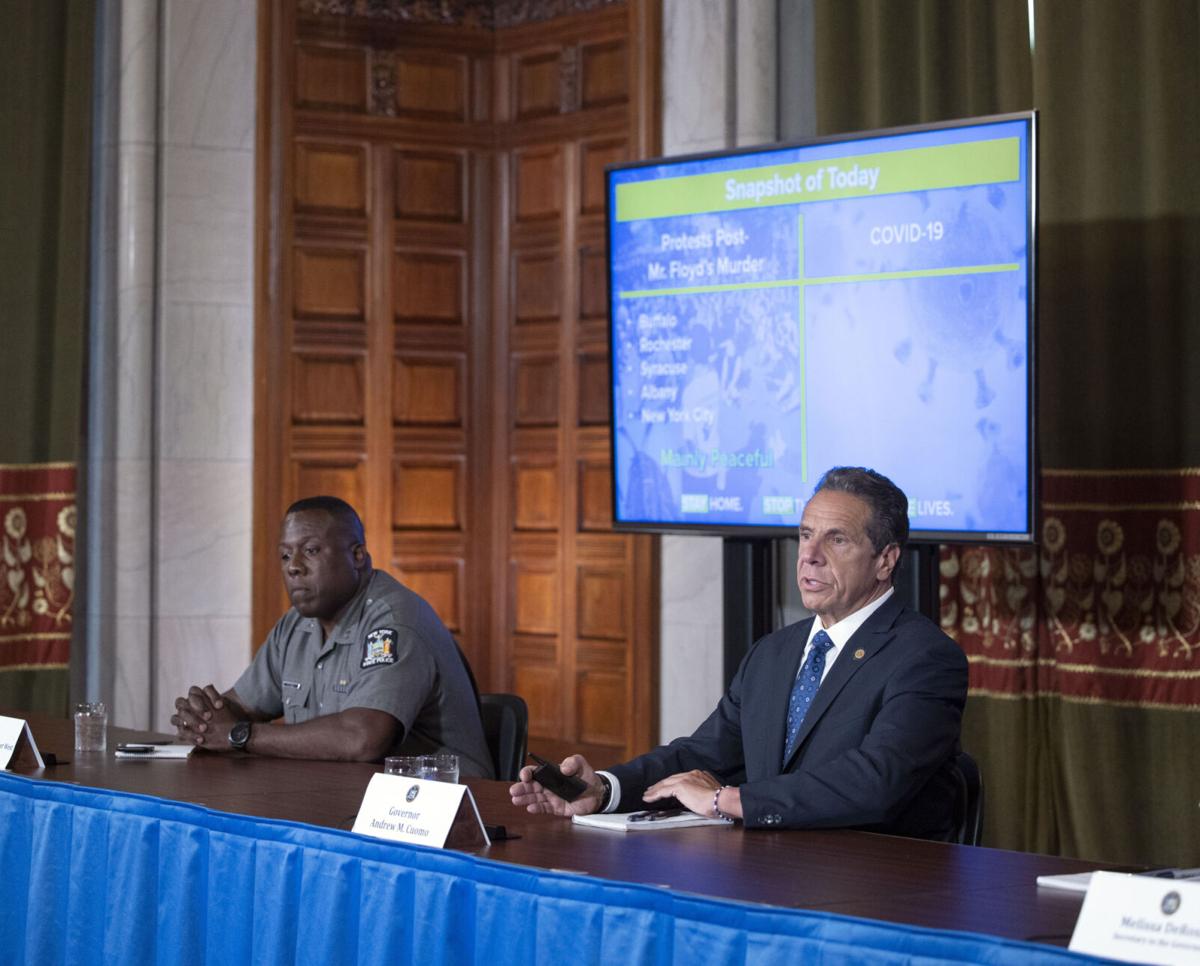 Courtesy of Gov. Andrew Cuomo’s officeLooters and demonstrators committing violent crimes during protests must be charged properly and kept in jail to prevent repeat offenses, Gov. Andrew Cuomo said Thursday during a briefing in the state Capitol.

Courtesy of Gov. Andrew Cuomo’s officeLooters and demonstrators committing violent crimes during protests must be charged properly and kept in jail to prevent repeat offenses, Gov. Andrew Cuomo said Thursday during a briefing in the state Capitol.

ALBANY — Prosecutors should properly charge violent demonstrators and set bail to keep them in jail after continuing nighttime unrest in cities statewide, Gov. Andrew Cuomo said Thursday, as officials expanded COVID-19 testing to all New Yorkers who attended a demonstration.

The governor was stunned Thursday, he said, after three New York Police Department officers were injured in two overnight incidents Wednesday into Thursday where demonstrators stabbed one officer in the neck and two other officers were shot in the hand.

“That is intolerable,” the governor said Thursday during a briefing in the state Capitol, adding the actions “exploit the situation.”

Police have arrested hundreds of New Yorkers over the past nine days as peaceful protests, rallies, demonstrations and overnight violent incidents raged across U.S. cities after 46-year-old George Floyd died facedown on the street on Memorial Day, May 25, when a white Minneapolis police officer kneeled on his neck for more than eight minutes.

Videos shared thousands of times on social media showed city police tackling or hitting some peaceful demonstrators with batons to enforce New York’s 8 p.m. curfew. The citywide curfew remains in effect each night from 8 p.m. until 5 a.m. through Sunday.

The governor was skeptical of the report police used force to control protestors unprovoked.

“Do you think there is any sensible police officer who believes their job is bludgeoning a peaceful person with a baton?” he asked reporters. “They don’t do that [for no reason]... If they hit somebody with a baton, clearly that’s wrong. But I don’t believe that’s what happened.”

Hundreds of looters are being let back on the streets within 24 hours of arrest since the state’s controversial bail reform law that precludes judges from setting bail on common burglary charges. Cuomo urged city district attorneys to charge looters with a stiffer set of burglary charges, such as second-degree burglary, that would require defendants to post bail or remain behind bars.

“To the New York City district attorneys: You look at these videos. It would be nonsensical if police were arresting looters and they were being arrested and returned to the street the next day to loot again,” Cuomo said. “These people should be charged for the crime that they are committing and bail set, right?”

State lawmakers rolled back New York’s bail reform in the 2020-21 executive budget passed April 2 by adding a number of misdemeanor and felony crimes to the list of those subject to a cash bail order, which allows a judge to keep a defendant in jail while awaiting trial unless they pay a certain amount in cash or bond. The amended measure goes into effect in July.

Floyd’s coffin arrived ahead of a memorial service in Minneapolis on Thursday afternoon. The memorial, the first of several, featured a eulogy from the Rev. Al Sharpton. New York held a moment of silence for Floyd at 2 p.m. at the start of his memorial service.

Attorney General Keith Ellison’s office upgraded Derek Chauvin’s, the now-fired Minneapolis police officer who was caught on camera with his knee on Floyd’s neck, charge to second-degree murder and formally charged the other three officers who failed to intervene with aiding and abetting murder. All four men remain jailed.

The state expanded COVID-19 testing criteria Thursday to include any person who attended a recent protest across the state. Cuomo encouraged any individual who attended a protest to get a test at one of the state’s 700-plus sites.

“One person — one person can infect hundreds,” Cuomo said. “If you were at a protest, go get a test, please. The protesters have a civic duty here also. Be responsible, get a test.”

To schedule a COVID-19 test or find your nearest testing site, visit coronavirus.health.ny.gov

Protesters must remain smart by wearing face masks or coverings and hold peaceful demonstrations to try and maintain social distancing and prevent a second wave of COVID-19, Cuomo said, adding the numbers will not reflect a spike for several days. COVID-19 symptoms may take four to five days to begin. Serious virus patients often do not enter the hospital until eight to 12 days from infection, the governor said.

“This is the greatest challenge government and society have had in modern-day history,” Cuomo said. “It is as dangerous a time as I have ever experienced in my lifetime.”

A virus resurgence in the state could set back the state’s phased reopening of nonessential businesses.

The Mid-Hudson Valley region is on track to start phase II of reopening June 9 of the state’s four-phase reopening plan. Long Island is on track to start phase II June 10, joining eight of the state’s 10 regions. Professional services including barber shops and hair salons, finance and insurance, retail, administrative support, real estate and rental leasing industries and other office-based work can reopen under the second phase.

The state will pass a law to repeal or reform 50a, which prohibits the release of police disciplinary records. Cuomo said this week he would sign any bill the Legislature brings to his desk about 50a, including a full repealing or amendment.

“We’ll pass 50a,” the governor said with confidence Thursday.

“For too long, section 50a of the state Civil Rights Law has shielded information from the public and allowed misconduct to go unseen,” Barrett said in a statement Thursday. “Without transparency and accountability, you can never have trust between law enforcement and the people they serve. It’s time to repeal 50a.”

The measure is one of several state Democrats in the senate and assembly majorities are negotiating as part of a legislation package related to reforms Cuomo has proposed over the last week to implement national law enforcement standards banning chokeholds and excessive police force. The governor also proposed prohibiting local prosecutors to prosecute allegations of police abuse.

Cuomo has not spoken to legislative leaders since they announced negotiations in a release Monday, he said. Lawmakers will continue discussions and negotiations with more details expected next week.

The state will allow schools and universities to hold drive-through graduation ceremonies or conduct ceremonies at drive-in movie theaters to allow for large gatherings of students and families to remain socially distanced. The state will reexamine socially-distanced outdoor commencements at a later date.

Medical schools are slated to reopen statewide June 22 to prepare for new students expected in the summer and fall semesters.

The state Department of Financial Services will issue an emergency regulation for insurance companies to expedite claims and payment for looted businesses and consumers who suffered damage from vandalism related to the continuing overnight civil unrest. Looters destroyed dozens of Bronx, Brooklyn and Manhattan businesses Monday into Tuesday.

Under the regulation, policyholders can make immediate repairs to damaged property to protect health or safety, and to submit claims with reasonable proof of loss, including photos, so businesses do not have to wait for police reports to file a claim.

Small businesses and consumers can also resolve disputes through an impartial mediation process paid for by the applicable insurer, according to the governor’s office.

The state saw 52 fatalities Wednesday, including 38 in hospitals and 14 in nursing homes. New York’s COVID-19 death rate is on a fluctuating decline after having 49 fatalities Tuesday, 58 Monday and 54 Sunday.

Statewide virus patients declined to 2,849 Thursday, down 129, according to the governor’s office.