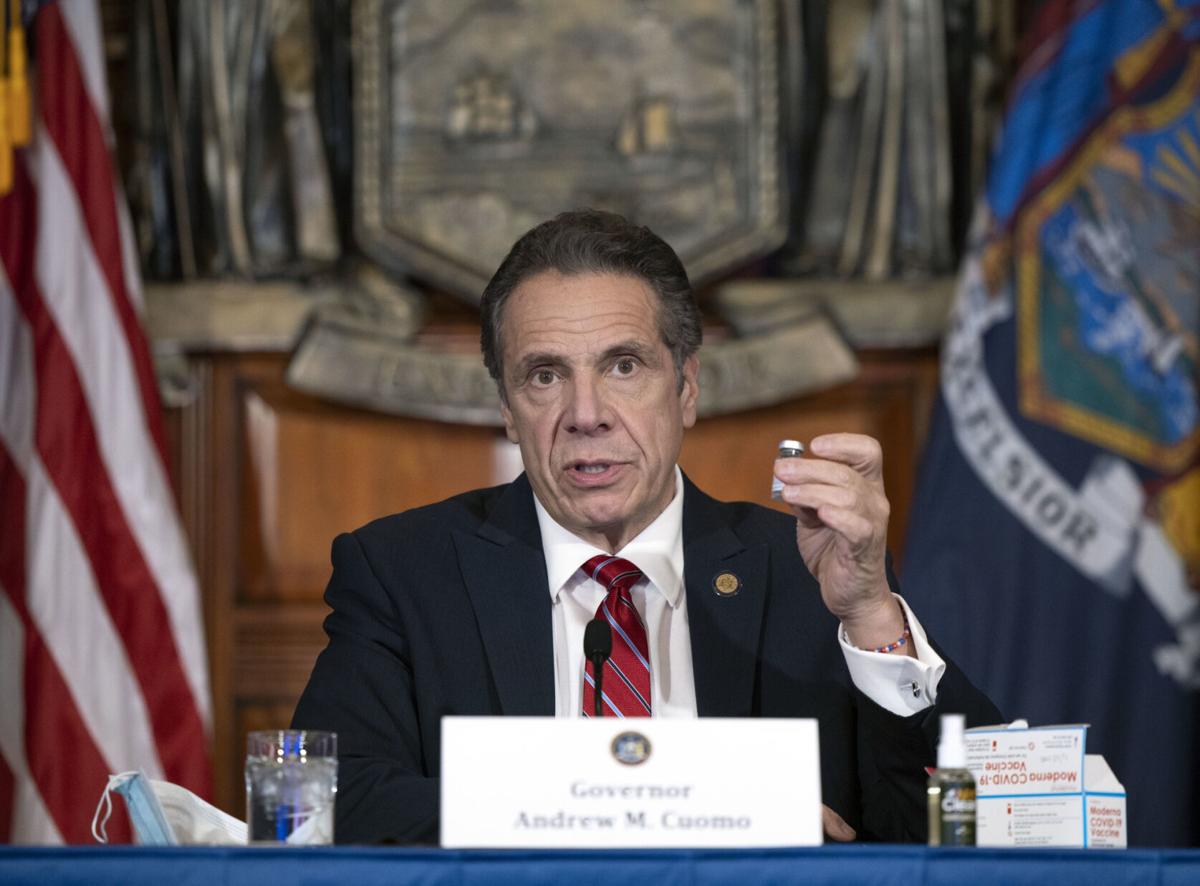 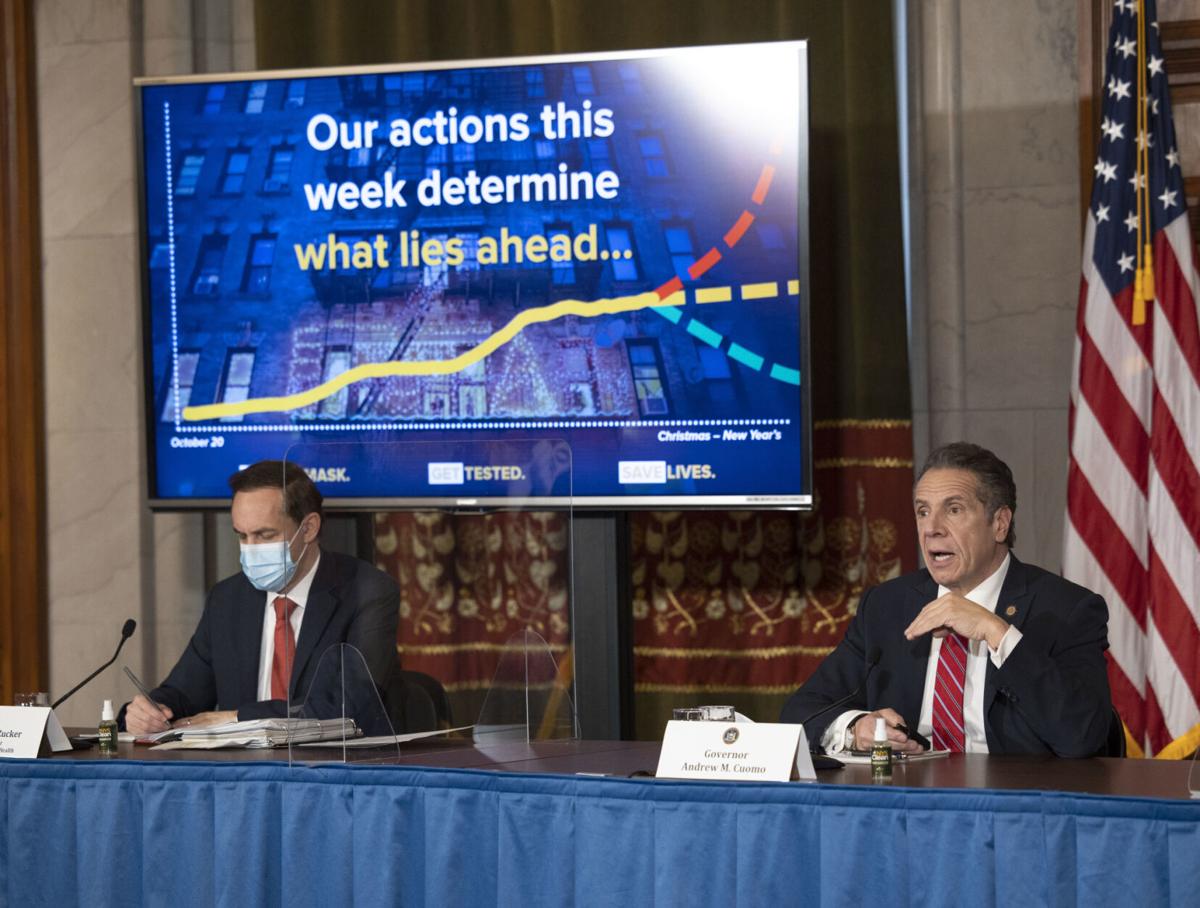 Gov. Andrew Cuomo, right, speaks about the potential for COVID-19 rates to spike across the state after the upcoming Christmas and New Year’s holidays. Courtesy of Gov. Andrew Cuomo’s Office

Gov. Andrew Cuomo, right, speaks about the potential for COVID-19 rates to spike across the state after the upcoming Christmas and New Year’s holidays. Courtesy of Gov. Andrew Cuomo’s Office

ALBANY — Gov. Andrew Cuomo pleaded with federal officials Wednesday to require travelers from the United Kingdom to test negative for the coronavirus before boarding a plane for the United States, demanding U.S. Health and Human Services Department and Centers for Disease Control and Prevention leaders “do their job.”

Cuomo blasted federal officials Wednesday for not enforcing the same travel restrictions in the United States to prevent spread of the mutated coronavirus.

“Why? Why would you put people’s lives at risk?” Cuomo asked of federal officials during a coronavirus briefing in the state Capitol on Wednesday. “What are we doing? ...When did common sense leave government? Why aren’t we saying test the travelers from the U.K. before they got on a plane and come to the United States?

“When did government become so bureaucratic and so apathetic and so slow that basic, common sense eludes them? Because that’s what this is.”

New York joins more than 120 countries around the world that require a negative test for U.K. travelers, or have banned travel from the region. New York is the only state to request the negative testing requirement to airlines.

Redfield and Azar are part of President Donald Trump’s administration, but Cuomo said politics should not impact government action because November’s presidential election is over. President-elect Joe Biden will be sworn into office Jan. 20.

“United States, CDC, HHS, do something. Do your job on the way out the door.”

The governor and Dr. Anthony Fauci, one of the nation’s leading infectious disease experts, support the negative testing requirement for travelers, but not a travel ban.

“Test travelers before they come,” Cuomo said. “That HHS and the CDC have not acted on this is really reprehensible. I don’t know if they’re just checked out, and if they’re checked out, they should resign. But to do nothing when you know the virus is coming here, so you should be concerned to isolate it and stop the spread, it’s just the greatest failure to do one’s job.”

Scientists and health officials do not know if the virus mutation is more deadly or if Pfizer’s and Moderna’s approved COVID-19 vaccines are effective against the variant.

“We’re looking to find out if it’s here, where it is,” Cuomo said. “If it is more easily transmitted, we want to catch it in the crib. Where’s patient zero? We want to find patient zero on that variant, and in the meantime, stop other people who are infected from coming to New York.

“It’s in the U.K. and it is more dangerous,” Cuomo said. “How much more dangerous? We don’t know. We think the vaccine works on it. That’s our working assumption.”

More than 89,000 New Yorkers have received their first of two injections of Pfizer or Moderna’s approved COVID-19 vaccine.

More than 22,000 vaccines were administered to nursing home residents and staff in 90 facilities Monday and Tuesday.

The state received an initial shipment this week of 346,000 doses of Moderna’s vaccine. Similar to Pfizer, each vial contains extra doses of the immunization than expected.

At least 11 dosages are in each vial instead of the reported 10, Cuomo said, adding several thousand more doses to the state’s vaccine supply.

The new strain has not been found in the United States to date, but Fauci said this week he believes the strain is here because of international travel.

The threat of the mutated virus transmitting to New York from Europe is déjà vu, Cuomo said, as COVID-19 initially spread in states like California and New York from millions of European travelers who landed in major coastal airports late last winter, according to the CDC.

The virus was first discovered in humans in Wuhan Province, China, last December.

“It’s déjà vu,” Cuomo said. “It is the same mistake that the federal government made that killed thousands of people and cost billions of dollars. That’s what the history books will write: The gross negligence of this federal government. We are doing the same thing again, and it makes no sense.”

Wadsworth Center, the Department of Health’s intensive research laboratory in Albany, increased its sequencing pipeline to accept positive COVID-19 specimens from state hospitals. The Wadsworth Center is leading the research of the highly contagious strain.

Hospitals can send positive samples to be tested for the mutated virus by sending an email to COVIDstrain@health.ny.gov.

New Yorkers can avoid subsequent state shutdowns of nonessential businesses if they celebrate socially distanced from others this holiday season through New Year’s Day next week.

“We are not destined for a shutdown,” Cuomo said. “A shutdown does tremendous economic damage and collateral damage to families. We can’t survive with these economic shutdowns.”

The state will shut down a community or area if a hospital reports to the state Health Department the facility is within three weeks of reaching 85% hospital capacity. Hospitalizations continue to increase statewide, but no medical facilities are on track to becoming overwhelmed with patients to date.

“But that could change if the spike goes up dramatically and that’s what we need to watch over these next 10 days,” Cuomo said.

Statewide hospitalizations increased 203 patients overnight to 6,864 people, and 672 were discharged.

An increased 0.07% of the Finger Lakes population is hospitalized at 816 virus patients. The Finger Lakes region has remained the state’s highest rate of new COVID-19 infections, hospitalizations and deaths through much of December.

Cuomo will speak with all hospital administrators and elected officials in the region about the area’s worsening outbreak.

Western New York hospitalizations have seen a slow decline to 0.04% of the population, or 484 people.

Hospitalizations also increased to 0.04% of the Capital Region’s population to 380 patients and back up to 0.02% in the North Country at 69 patients.

New York City, the nation’s original epicenter of a COVID-19 outbreak last spring, has 2,337 patients in the hospital, or 0.03% of the city’s population, and 1,167 people hospitalized with the virus on Long Island at 0.04%.

The state reported 164 New Yorkers died of COVID-19 complications Tuesday — the highest number of virus fatalities in a 24-hour period since the spring.

“They are in our thoughts and prayers especially during this holiday season,” Cuomo said. “What a terrible, aggravating circumstance to this miserable year.”

The governor does not plan to hold a coronavirus briefing on Friday, Christmas Day.