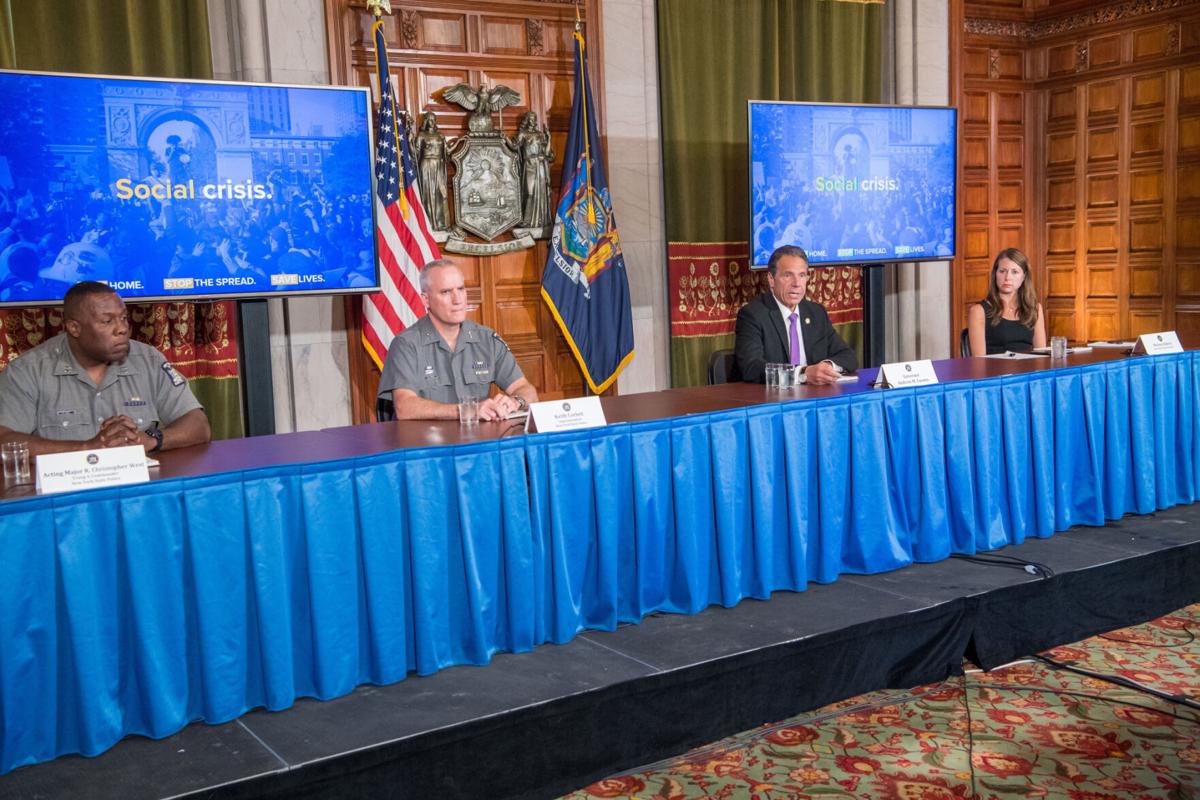 Courtesy of Gov. Andrew Cuomo’s office Gov. Andrew Cuomo said the looting and rioting in New York City overnight Monday into Tuesday was “inexcusable” during a pandemic briefing Tuesday afternoon in the state Capitol in Albany. 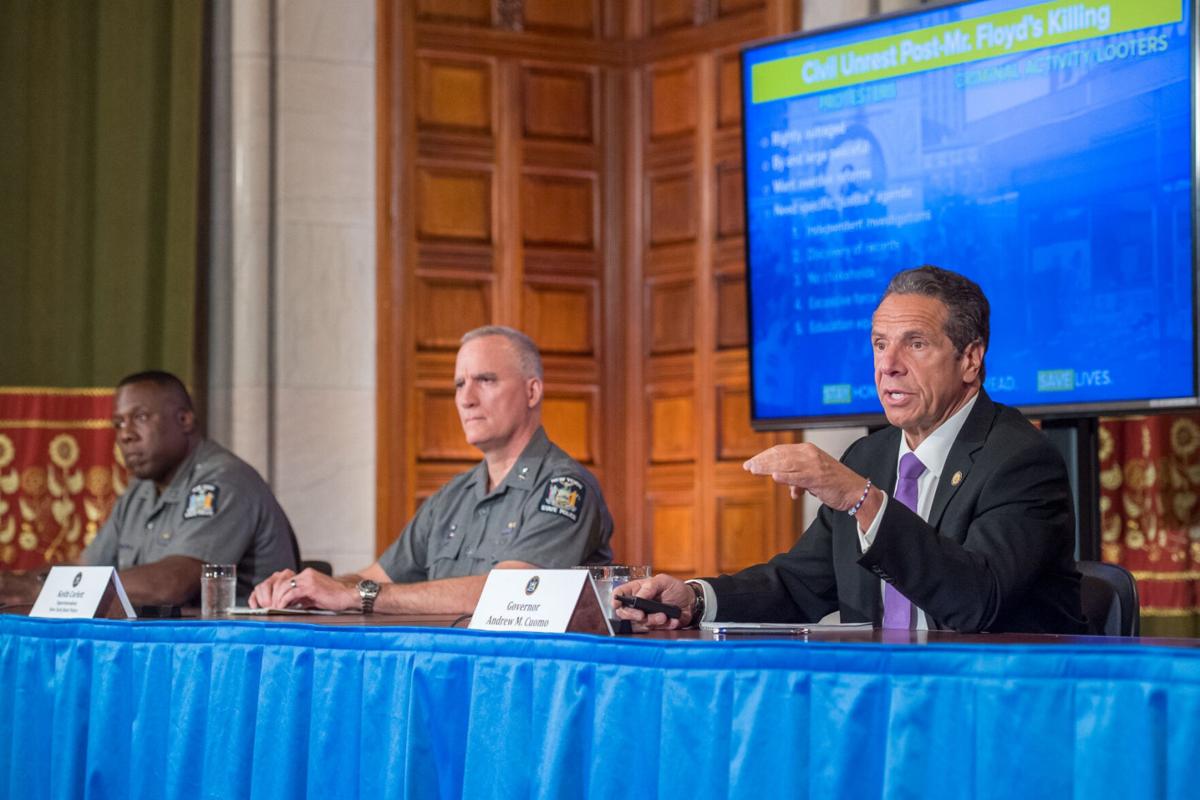 Courtesy of Gov. Andrew Cuomo’s office Gov. Andrew Cuomo said the looting and rioting in New York City overnight Monday into Tuesday was “inexcusable” during a pandemic briefing Tuesday afternoon in the state Capitol in Albany.

About 700 people were arrested and charged after attacking police officers, looting and other criminal activities overnight Monday into Tuesday that destroyed dozens of Bronx, Brooklyn and Manhattan businesses. The incidents mostly occurred from 23rd Street to the 50s, along with parts of the Bronx with reports of looting in the Union Square area, Police Commissioner Dermot Shea said.

The looters are mainly members of political extremist groups, Cuomo said Tuesday during a briefing at the state Capitol.

“[They] are using this moment for their own purposes ad exploiting this movement and moment,” the governor said, adding the majority of peaceful protests are “two very different things.”

“That’s what this nation is all about — the right to protest,” he said. “This is a totally different situation that has nothing to do with the protesters.”

Peaceful protests, rallies, demonstrations and overnight violent incidents have raged across U.S. cities since late last week after 46-year-old George Floyd died facedown on the street on Memorial Day when a white Minneapolis police officer kneeled on his neck for more than eight minutes.

Cuomo slammed de Blasio and the New York Police Department’s response to control the overnight looting Monday into Tuesday after the governor offered all mayors statewide — about 700 officials — additional state police troopers or troops of the state’s 13,000 members of the National Guard, which have been on standby since the weekend. De Blasio did not take the offer.

“The police in New York City were not effective at doing their job last night — period,” Cuomo said. “They have to do a better job.

“...It was inexcusable... I believe the mayor underestimated the problem.”

The city was placed under curfew starting 11 p.m. Monday through 5 a.m. Tuesday. The governor said the curfew was not enough.

De Blasio insisted Tuesday all outside armed forces do more harm than good, and said the NYPD is fully capable of taming the mayhem.

Cuomo said he would have to “displace” the mayor to forcefully dispatch National Guard assistance to New York City.

“Legally ... can you displace a mayor? Yes, a mayor can be removed,” the governor said. “I don’t think we’re at that point.

“It is a bizarre thing to try to do in this situation. It would make a bad situation worse.”

The governor has made statements supporting peaceful protesters and the Black Lives Matter movement over the last several days, but condemns violent acts, saying it distorts the message that will incite change.

“I am disappointed and outraged at what happened in New York City last night,” Cuomo said. “They destroyed businesses essential to the community and the very people we’re trying to help.”

De Blasio extended a New York City curfew for the rest of the week through Sunday in effect each night from 8 p.m. until 5 a.m. Monday’s 11 p.m. curfew, was originally for one night only. The curfew is to address the looting and civil unrest — not protesters, Cuomo said.

“It’s not to harass law-abiding citizens,” the governor added.

“We’re going to have a tough few days. ... We will find a way through,” de Blasio said Tuesday, adding that the NYPD would get extra resources as needed.

Video recorded during the incident showed Floyd, handcuffed behind his back, facedown on the street with Chauvin kneeling on Floyd’s neck for more than eight minutes. During that time, Floyd said he couldn’t breathe and became unresponsive as Chauvin continued to hold his knee on Floyd’s neck. Police said they were trying to arrest Floyd as part of a forgery investigation.

The state Senate and Assembly majority conferences met and discussed the ongoing issues Monday, according to a release from the New York State Legislature. Legislators have several bills related to the issues, and are developing a legislative package based on the ideas.

Lawmakers intend to discuss, negotiate and vote on the bills next week.

President Donald Trump announced a plan late Monday to invoke the Insurrection Act of 1807 to send federal troops into cities to suppress riots. After the president’s speech, riot police near the White House cleared protesters with tear gas and rubber bullets to make a path for Trump to St. John’s – the “church of presidents” – where he held a Bible aloft in a show of piety and power.

“These actions are fundamental to our democracy,” Delgado said in a statement Tuesday. “When the president of the United States — who is charged with faithfully executing our laws — deploys the military domestically, and uses tear gas and rubber bullets on peaceful protesters, he is not just attacking these individuals; he is also attacking our very democracy and our commitment as a nation to ensure that no one person should ever rise above the law and rule with tyrannical authority. I condemn this breach of duty to our country with every fiber in my American bones.”

Summer day camps across New York can reopen June 29, officials announced Tuesday. The state has not made a decision about sleep-away camps, but will make an announcement later this month.

The state saw 58 virus-related deaths Monday, including 47 in hospitals and 11 in nursing homes. New York’s COVID-19 death rate is on a flattening decline after having 54 fatalities Sunday, 55 Saturday and 67 Friday.

“Congratulations to the people of the state of New York,” he said. “Look at the progress we made.”