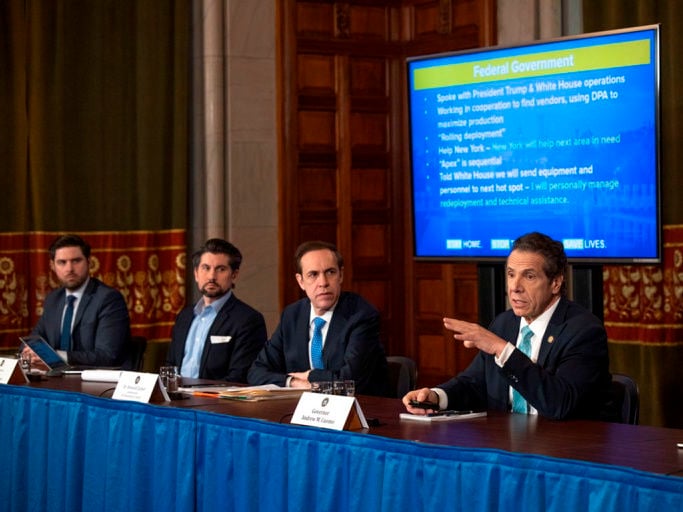 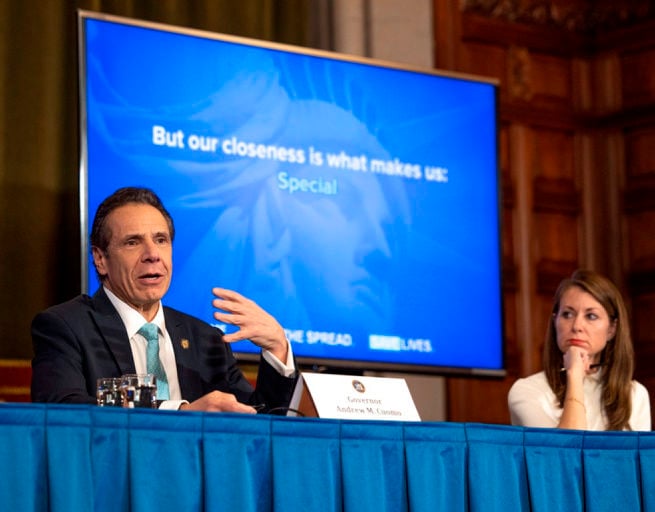 Courtesy of Gov. Andrew Cuomo’s office Gov. Andrew Cuomo commended the 6,100 mental health professionals who volunteered to give New Yorkers free emotional support during the required social distancing and isolation during a COVID-19 press briefing in the state Capitol on Wednesday.

Courtesy of Gov. Andrew Cuomo’s office Gov. Andrew Cuomo commended the 6,100 mental health professionals who volunteered to give New Yorkers free emotional support during the required social distancing and isolation during a COVID-19 press briefing in the state Capitol on Wednesday.

ALBANY — Gov. Andrew Cuomo urged the state’s congressional lawmakers to reject the U.S. Senate’s $2 trillion coronavirus aid package, he said Wednesday, adding the pandemic could leave the state with a revenue shortfall of up to $15 billion.

Congressional leaders reached a deal on a $2 trillion package — the largest in American history — late Tuesday to provide federal aid in response to the coronavirus pandemic. The plan will cut financial-assistance checks to middle-class and lower-income Americans and increase unemployment benefits to a greater number of workers to be paid out for four months. The aid would also serve as relief for businesses and state governments.

Cuomo railed against the Senate’s $2 trillion emergency aid plan Wednesday, saying the bill would give New York an insufficient $3.8 billion, with about $1.3 billion slated for New York City.

“That is a drop in the bucket as to need. It would be terrible for New York,” Cuomo said. “I spoke to our congressional delegation. This morning, I said to them, ‘This doesn’t do it.’ I understand the Senate theory and the Republican theory, but we need the House to make adjustments.”

A similar plan in the House gave the state $17 billion, the governor said. Under the Senate bill, the $3.1 billion reserved for New York is 1.9% of the state’s budget, according to a statement from Cuomo’s office.

U.S. Rep. Antonio Delgado, D-19, could not be reached for comment Wednesday about the bill.

The state’s response to COVID-19 has cost roughly $1 billion to date, Cuomo said.

“We’re looking at a revenue shortfall of 9, 10, $15 billion,” Cuomo said. “If we don’t get more funding from the feds, I don’t know how we write the budget. That’s why this Senate bill is so troublesome.”

The state had 30,811 positive cases of COVID-19 as of press time Wednesday, with 285 deaths and 3,805 requiring hospitalization, or about 12%. Of those in the hospital Wednesday, 888 patients are in the intensive care unit, or 3%.

Public parks have remained a problem in New York City, Cuomo said, as residents have continued to gather in large numbers and have not practiced the Centers for Disease Control & Prevention’s guidelines for 6-feet social distancing.

The state plans to pilot close New York City streets to cars and leave them open to pedestrians. Parks will remain open, but the state will enact mandatory playground social density and prohibit close contact sports, such as basketball, or other close contact on a playground.

The state’s most dense virus hot spots have remained downstate and in New York City. To date, the virus has been detected in 51 counties and the city, with 17,856 positive cases in New York City, 4,691 cases in Westchester County, 3,285 in Nassau County, 2,260 cases in Suffolk County, 968 in Rockland County and 142 in Albany County. To see the complete county breakdown of positive COVID-19 cases and deaths statewide, view the COVID-19 map and tracker at hudsonvalley360.com/site/covid19.html

Greene County has eight positive cases of COVID-19 in Windham, Durham, Greenville, Hunter and Cairo, as of Wednesday afternoon. None of the infected people have required hospitalization, according to a statement from Greene County Public Health. Thirty-two people are under precautionary quarantine and are being self-monitored for possible exposure.

“Testing is limited to those with symptoms and positive exposure,” according to a statement Wednesday from Greene County Public Health. “It is important to note that, at this time, due to limited testing capability, the number of positive cases may not fully reflect current illnesses.”

Columbia County reported 18 positive cases Wednesday — the same as Tuesday, according to Johns Hopkins University & Medicine’s live global COVID-19 tracker. As of Tuesday, 82 residents were under mandatory quarantine and 76 under precautionary isolation. Five residents have suspected, but not tested cases of the virus.

The state is working around the clock to ramp up hospitals with adequate beds, staffing, equipment and ventilators before the virus apex, or peak, is expected to hit within the next 21 days, Cuomo said.

The state projects it needs 30,000 ventilators through the duration of the pandemic, Cuomo said. The state purchased 7,000 and expects 4,000 from the federal government through the Defense Production Act. New York also has 14,000 ventilators stockpiled throughout the state, but hospitals have not requested additional machines as of Wednesday.

“We have no anticipation to prioritize ventilator usage,” Cuomo said. “Our goal is to have a ventilator for anyone who needs one.”

The state needs 140,000 hospital beds, but has 53,000. Hospitals were tasked with increasing their capacity a minimum of 50% with a goal of doubling it.

More than 40,000 retired nurses, doctors and medical professionals signed up to be part of the state’s volunteer Surge Health care Force. The extra health care workers will be deployed to the state’s temporary medical centers when they open, or to hospitals with

Cuomo has requested more equipment, ventilators and aid from the federal government to help combat COVID-19 throughout the month of March. The governor urged the federal government implement a rolling deployment of ventilators and supplies to address the critical needs of virus hot-spot areas across the nation, and to move the supplies as necessary.

For general information, Greene County residents are directed to call the Greene County Call Center at 518-635-5165. In Columbia County, call the county department of health at 518-828-3358.

Twin County residents who need screening or more information about being tested for COVID-19 should contact Columbia Memorial Hospital at 518-828-8249.