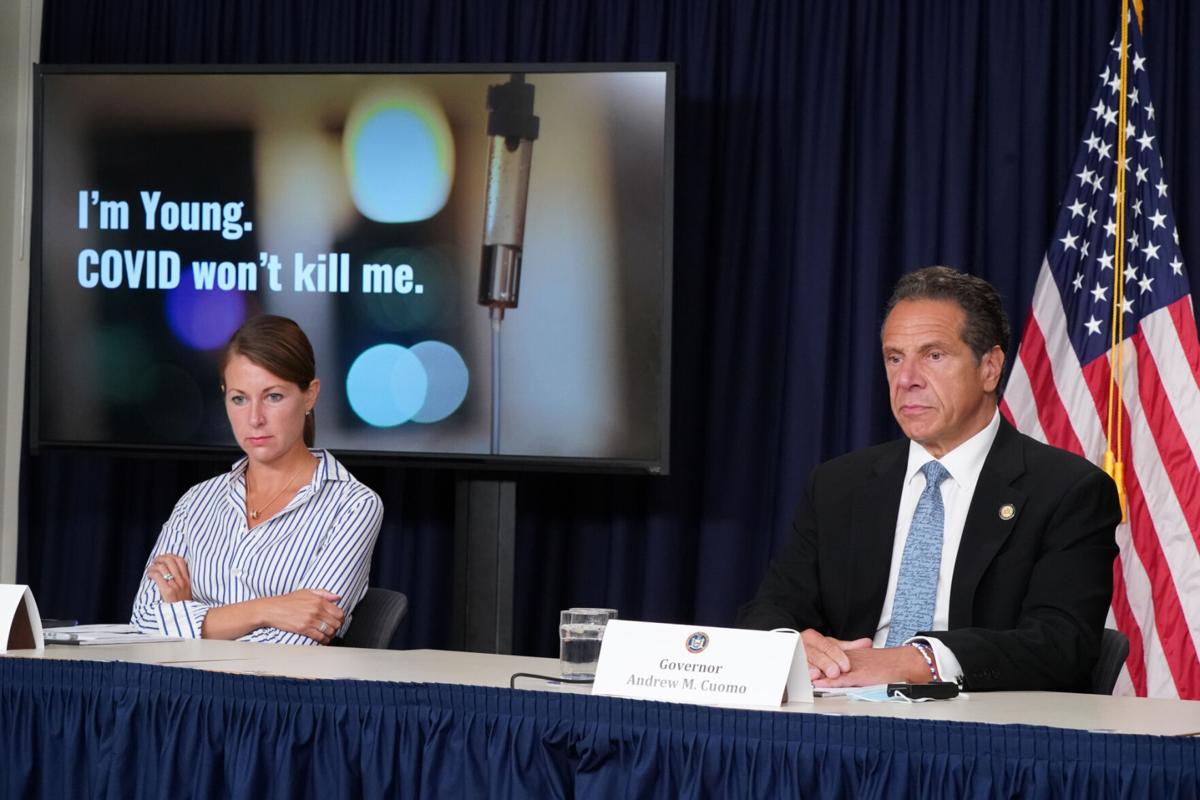 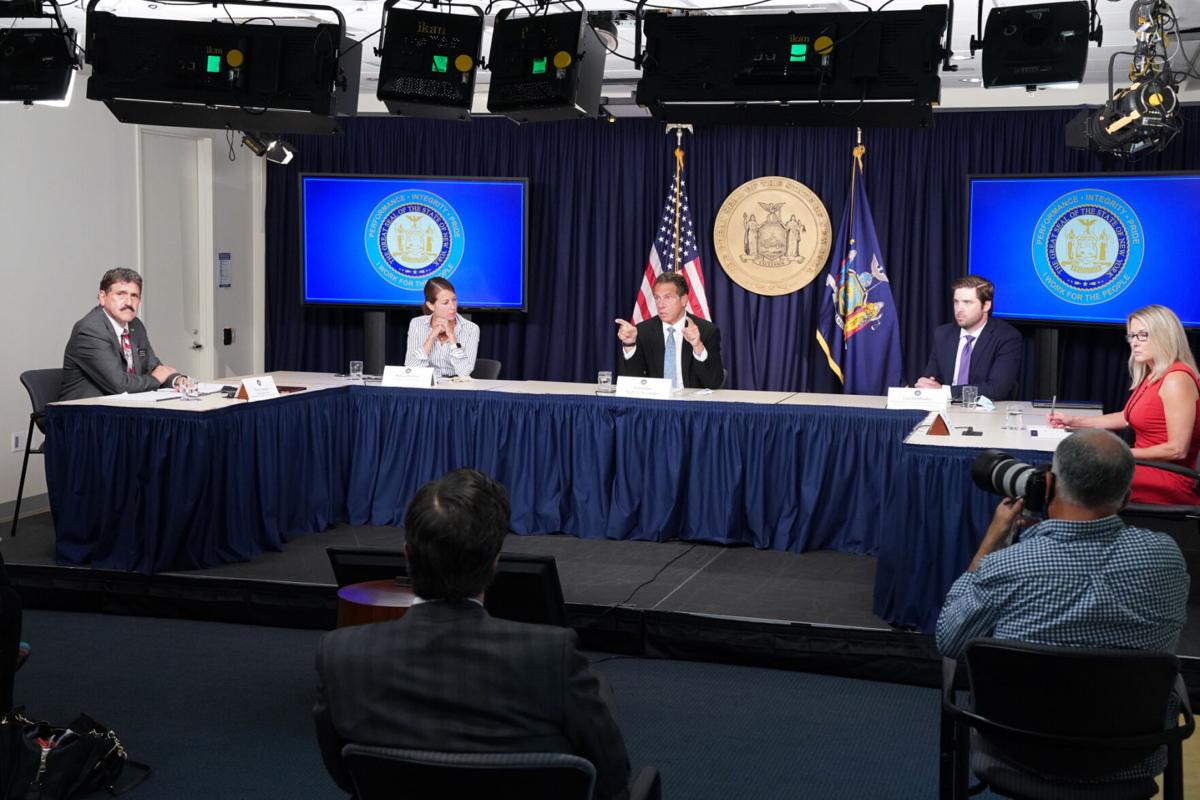 Gov. Andrew Cuomo and his aides discuss the rising number of COVID-19 cases in young New Yorkers ages 21 to 30 during a pandemic briefing Thursday at the governor’s office in Manhattan. Courtesy of Gov. Andrew Cuomo’s Office

Gov. Andrew Cuomo and his aides discuss the rising number of COVID-19 cases in young New Yorkers ages 21 to 30 during a pandemic briefing Thursday at the governor’s office in Manhattan. Courtesy of Gov. Andrew Cuomo’s Office

NEW YORK — Coronavirus infections in young New Yorkers are on the rise as they continue to socialize or party in large groups, Gov. Andrew Cuomo said, adding the state will sue President Donald Trump if he insists on deploying federal agents to address New York City’s crime spike.

Young adults in New York are increasingly contracting COVID-19 after a 4-percent increase in infections in New Yorkers ages 21 to 30. Recent data shows the age group had a 9.9% positive rate one week climbing to 13.2% the next.

“That is a significant increase in a short period of time,” Cuomo said Thursday during a pandemic briefing in his Manhattan office. “Young people: This is not the time to fight for your right to party. I respect your right to party. I fully respect it. I would enshrine it in state law, but let’s be smart about it.”

The state will run a COVID-19 ad campaign, especially on social media, targeting New Yorkers ages 21 to 30 to address common misconceptions about the coronavirus. Cuomo played the 30-second video, which ends with a shot of the camera surrounded by earth, looking up at the sky from a grave.

“There is an attitude that young people are immune — you are not,” Cuomo said. “If it doesn’t kill you, you can come home and give it to someone inadvertently and then it can kill them. I’ve heard the most inane responses. They just don’t know the facts.”

Rising COVID-19 infections among young New Yorkers are concerning officials as virus cases and hospitalizations continue to surge in 39 states and Puerto Rico. The governor showed the nation’s increasing coronavirus curve, or “mountain,” compared to New York’s bent apex, and said if the virus is not controlled elsewhere, the state is in danger of a second wave.

“We know the rushed reopenings don’t work,” the governor added. “States that rushed are reclosing. How did that help the economy? It didn’t. Europe is quarantining us.”

Trump deployed federal agents to Chicago, Illinois, and Portland, Oregon, following a recent spike in violent crimes, including shootings and homicides, and demonstrations. Cuomo dissuaded the president from sending federal agents to New York City to address the city’s recent crime increase, saying it was the state’s responsibility and no federal property is in danger.

“If the president were to do that, we would sue,” Cuomo said of deploying federal agents to the city. “Constitutional law is clear on this. The nation does not have a federal police force to deploy at their discretion. Sending federal agents would be pouring gasoline on a fire, and that’s the last thing we need in New York City.”

New York City shootings are up 63.3% with 717 incidents this year and 439 in 2019. Police reported 197 murders in the five boroughs compared to 155 last year — an increase of 27%, according to the New York Police Department. Violent crime is on the uptick in cities across the nation and statewide, including Albany, Rochester, Buffalo and Syracuse.

The rise in crime has been met with a recent rise in homelessness and graffiti, which add to the city’s overall feeling of lawlessness and decline, Cuomo said.

“It’s a bad combination we’re going to have to address,” the governor added. “One thing at a time. We have to get through the current crisis. We have work to do to restart and rejuvenate the economy.”

The governor would not specify when asked how officials will address the surge in criminal activity.

State and local officials are feeling increased pressure as the state faces a $13.3 billion deficit this year, or $61 billion over four years, and negotiations continue before federal lawmakers enter recess Aug. 7.

“Data shows if you don’t fund state and local governments, you have to have dramatic cuts that will really hurt state and local economies,” Cuomo said, continuing his months-long plea for federal COVID-19 aid to fund localities. “Initially, Democratic states had the most COVID cases. Now you have Republican states suffering worse. This hyper-political Washington attitude ... it is the epitome of hypocrisy.”

New York State Police will lead a task force with the State Liquor Authority to investigate and shut down businesses or establishments not complying with state COVID-19 mandates, such as social distancing or wearing face masks in public.

Cuomo repeated his call from the last several months for local governments and police agencies to enforce coronavirus mandates.

“If you need help, we’ll get you help with the state police, but you have to enforce the law,” he said.

Travelers from 31 states with high coronavirus infections must self-quarantine for two weeks when arriving in New York. Police are also stationed at airports to ensure passengers complete a state Health Department traveler form before leaving the airport, otherwise they are issued a summons for a hearing and could be directed to complete mandatory quarantine.

The mandate does not apply to travelers who passed through one of the states for fewer than 24 hours or to essential workers.

The Capital Region had the state’s highest new COVID-19 infections Thursday out of New York’s 10 regions. About 30 people became infected with the virus following a Fourth of July party.

“One party — 30 people,” Cuomo said. “You understand why we say one bad event, one bad group, can be a real problem.

Thirteen New Yorkers died from the virus Wednesday, including 12 in hospitals and one in a nursing home, and is up from nine Tuesday. The state’s virus-related fatalities have fluctuated below 15 per day for several weeks.