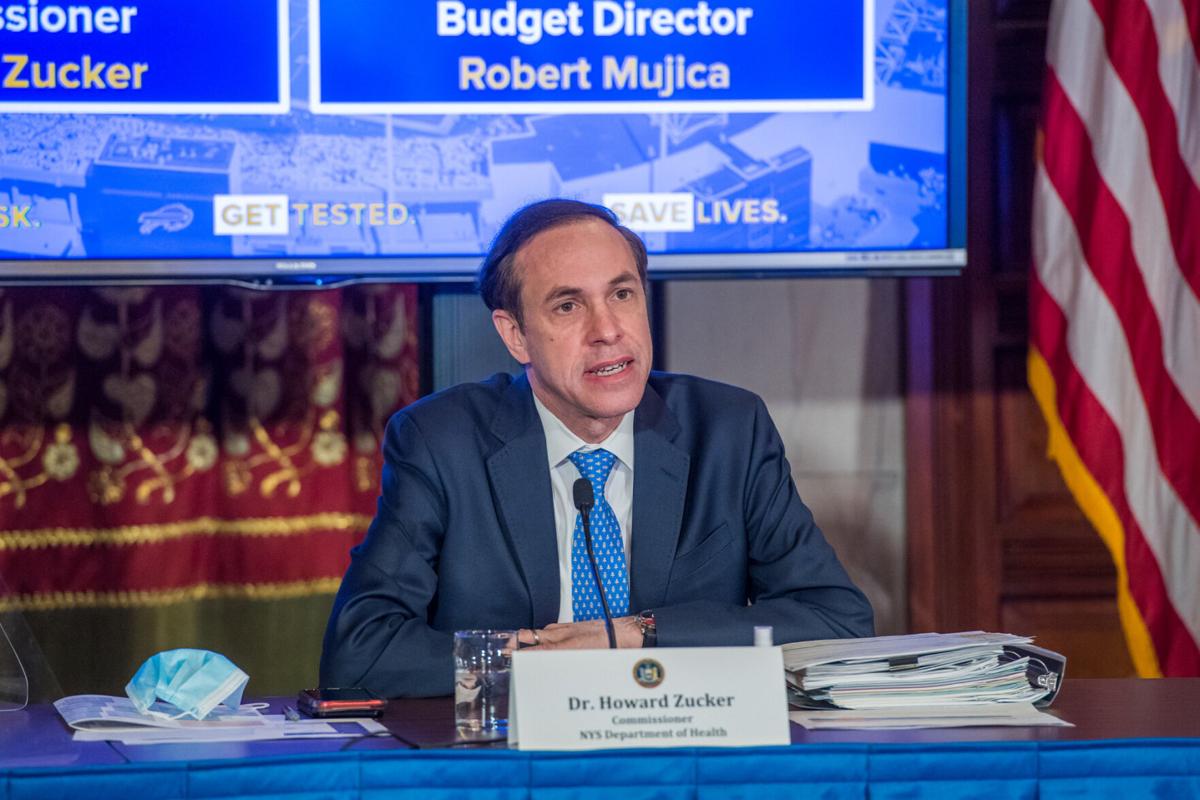 Dr. Howard Zucker, commissioner of the state Health Department, speaks during a COVID-19 briefing in the state Capitol last month. Zucker was scheduled to testify before a joint legislative budget hearing Wednesday and answer more questions about the state’s COVID-19 deaths in nursing homes. Courtesy of Gov. Andrew Cuomo’s Office 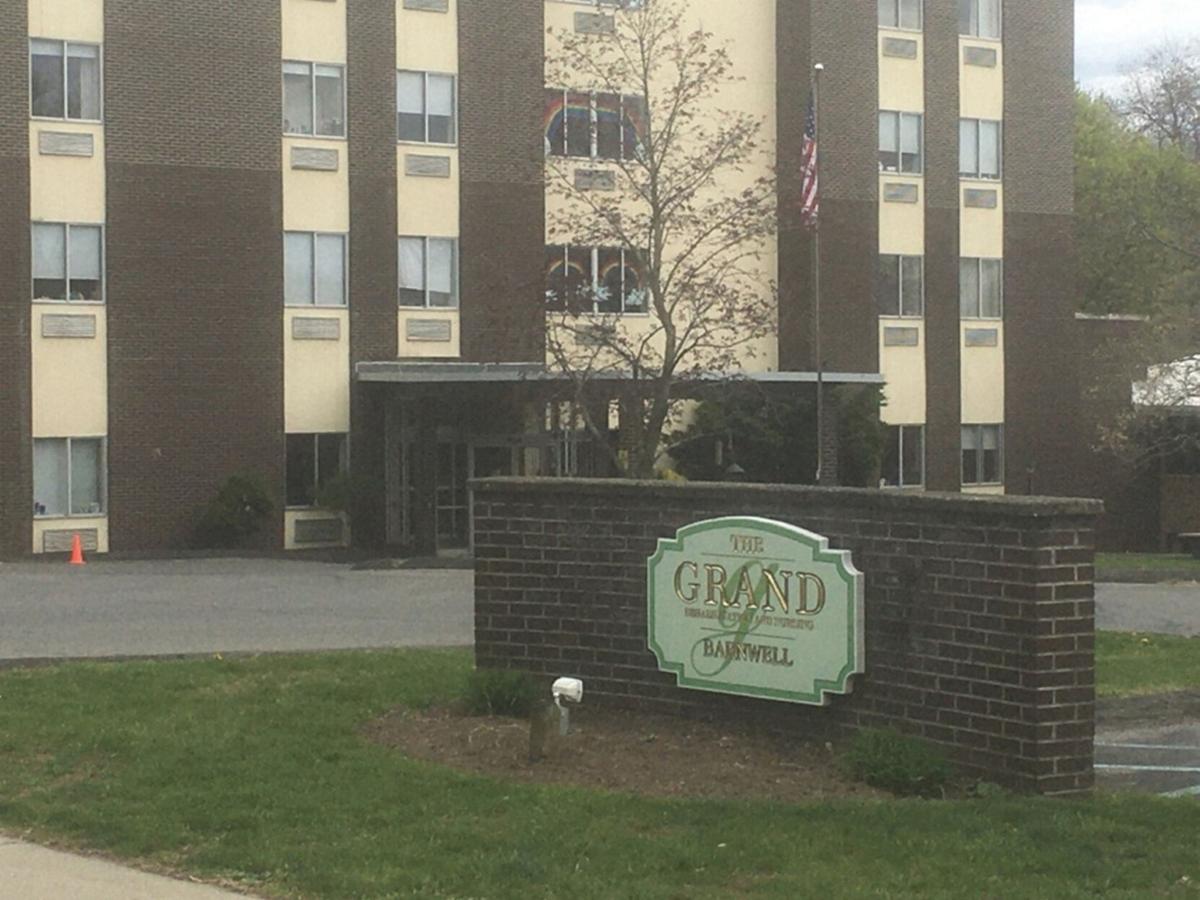 The outside of The Grand Barnwell Nursing and Rehabilitation Center in Valatie, where multiple residents died from COVID-19 complications since the pandemic began last March. C-GM file photo

Dr. Howard Zucker, commissioner of the state Health Department, speaks during a COVID-19 briefing in the state Capitol last month. Zucker was scheduled to testify before a joint legislative budget hearing Wednesday and answer more questions about the state’s COVID-19 deaths in nursing homes. Courtesy of Gov. Andrew Cuomo’s Office

The outside of The Grand Barnwell Nursing and Rehabilitation Center in Valatie, where multiple residents died from COVID-19 complications since the pandemic began last March. C-GM file photo

State Supreme Court Judge Kimberly A. O’Connor ruled in favor of the lawsuit filed by independent think tank Empire Center for Public Policy and Sen. Jim Tedisco, R-Glenville, against Gov. Andrew Cuomo’s administration and the state Health Department in September. O’Connor is an acting justice of the Albany County Supreme Court and the Ulster County Supreme Court in the state’s 3rd Judicial District.

The department must disclose the requested COVID-19 nursing home data, including the deaths of nursing home residents who were transferred to hospitals and died from virus complications within five business days, according to the ruling.

The state is mandated to pay for Empire Center’s legal fees.

“I want to thank Justice O’Connor for her ruling that demonstrates that this nursing home data is public information and the people have a right to know what their government is doing,” Tedisco said in a statement announcing the ruling Wednesday.

The hearing was rescheduled to Feb. 25. Lawmakers have said the department requested the postponement, citing Zucker’s commitment to be present at Gov. Cuomo’s COVID-19 briefings.

Cuomo did not hold a COVID-19 briefing Wednesday as of 4 p.m.

Representatives from Cuomo’s office did not respond to multiple requests for comment Wednesday about the governor’s schedule or court ruling.

The Health Department released the presumed nursing home virus fatalities for the first time after brushing off lawmakers’ requests for updated figures for more than seven months, and in response to a report state Attorney General Letitia James published last week that concluded health officials reported as much as half the total number of COVID-19 fatalities in nursing homes.

The state Health Department has delayed the Empire Center and Tedisco’s Freedom of Information Law requests for the data three times, according to a statement from Tedisco’s office Wednesday.

Tedisco filed an amicus brief to the Empire Center for Public Policy’s lawsuit against the state Health Department for refusing to release complete COVID-19 death data of nursing home residents.

“With the preliminary audit complete, we were already in the process of responding to the their FOIL request, and updating DOH’s website with publicly available information,” state Health Department spokesman Gary Holmes said in a statement Wednesday.

“Gov. Cuomo’s coronavirus cover-up is crumbling down,” Tedisco said. “It’s obvious that the governor’s six-month cover-up and refusal to give us these numbers shows he felt they mattered so he could hide any blame. History has shown that the cover-up is often worse than what’s being covered-up. Sadly, a lack of transparency has been a hallmark of this administration.”

Tedisco and Assemblyman Ron Kim, D-Queens, have sponsored legislation S8756/A10857 to establish an independent, bipartisan investigation with subpoena power to examine the handling of COVID-19 in state adult-care facilities and nursing homes since September.

Assembly and Senate Republicans held a joint press conference Wednesday morning before the judge’s ruling was announced to push for Democrats in both majority conferences to support drafting a legislative subpoena to force the Health Department to release all COVID-19 data in nursing homes.

The Republicans’ joint push is not motivated by facts, Holmes said Wednesday.

“There are politics and there are facts, and the facts are the Legislature has known for weeks that DOH officials will be testifying at their budget hearing to answer questions about this or any other issue,” the Health Department spokesman said. “Dr. Zucker publicly made clear that this information was going to be released before the hearing and it has been.”

Cindy Lizzi and her brothers, Phil and Ted Minnesale, recounted the loss of their 93-year-old mother, Agnes, who died from COVID-19 in April. Agnes lived in the Teresian House Center for the Elderly in Albany.

The siblings recounted how nursing home staff were uncooperative in communicating regular updates about their mother’s condition.

“She was sick,” Ted said. “They didn’t know for sure what it was because she was never tested. She had all the symptoms of COVID.”

The family is suspicious about the state’s controversial March 25, 2020, Health Department memo that mandated long-term care facilities and nursing homes must accept and cannot discriminate against virus-positive residents by denying readmission to recover at home.

The order allowed COVID-positive residents to be permitted to return to the congregate-care facility. Officials have argued that, at the time, they discharged virus patients expected to recover because of hospital capacity concerns.

Cuomo and his top aides have repeatedly said the directive was in compliance with federal Centers for Disease Control and Prevention guidelines at the time and is demanding answers about the decision.

Fox News meteorologist Janice Dean, who had family members die from COVID-19 in New York adult-care facilities and has advocated at multiple Republican-led forums about the issue, spoke during Wednesday’s press conference.

“This is not about politics,” Dean said Wednesday morning. “We lost people on both sides of the aisle as a result of the state’s terrible, tragic policy. ... The attorney general’s report is a step in the right direction. It confirms our fears. It’s not enough for us to sit until the end of February and get and hope for additional answers.

The attorney general’s office received about 950 complaints on a hotline for family members having issues receiving communications from nursing home staff while in-person visits were prohibited between April 23 and Nov. 16. Alleged instances of neglect include insufficient personal protective equipment such as gloves, face shields, masks and gowns, as well as insufficient COVID-19 testing for residents and staff.

Nursing homes’ lack of compliance with infection-control protocols put residents at increased risk of harm and facilities that had lower pre-pandemic staffing ratings had higher COVID-19 fatality rates, according to the report.

The Health Department has conducted more than 2,200 COVID focus surveys at the state’s 613 nursing homes since March 1, 2020, according to a statement from the department Wednesday.

“To date, 84 nursing homes have agreed to pay more than $1.1 million in fines as part of our enforcement efforts,” according to the department.

Senate Minority Leader Rob Ortt, R-North Tonawanda, said during Wednesday’s press conference it shouldn’t be that difficult for lawmakers to get data from the Health Department.

“When the GOP were in power, they failed to issue one single subpoena over the course of an entire decade,” Murphy said in a statement Wednesday. “Now is the time for real leadership, not grandstanding. We’ve received the full nursing home numbers only after our own Democratic senators stood up to the governor and threatened a subpoena nine days ago and the attorney general issued her report. We will continue to lead and use all tools at our disposal to get all information related to these important issues.”

Assemblyman Kevin Byrne, R-Mahopac, who serves as on the Health Committee, cited the attorney general’s report as evidence that strengthens the call to expand a bipartisan and federal investigation.

Representatives from the Assembly Majority conference did not respond to requests for comment Wednesday.

“Let’s keep pounding this drum,” said Assembly Minority Leader Will Barclay, R-Pulaski. “It’s unforgivable that the governor has not been answering our questions on this to get the majority to have these hearings so we can get the information from the second floor.”