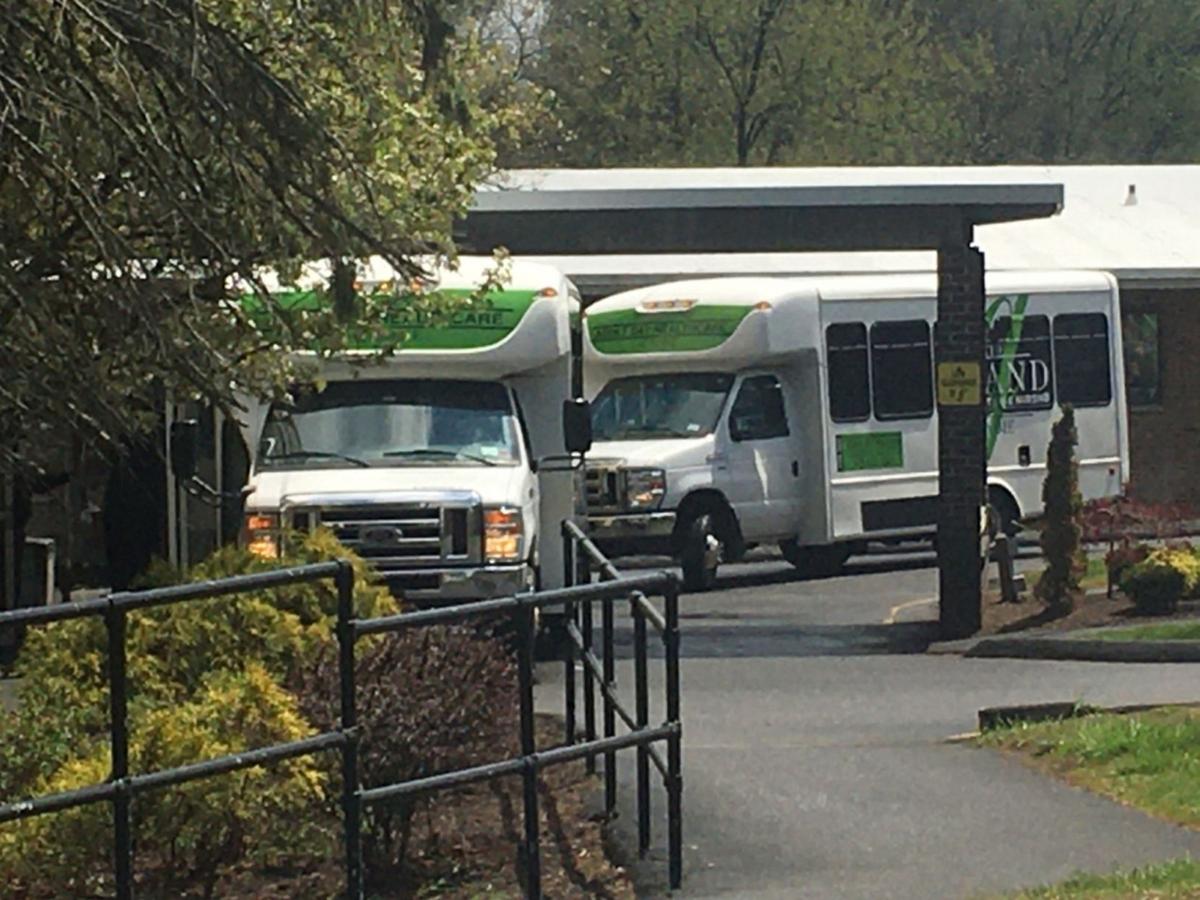 Bill Williams/Columbia-Greene MediaTransport buses outside The Grand Rehabilitation and Nursing at Barnwell, where more than 100 people have tested positive for COVID-19. 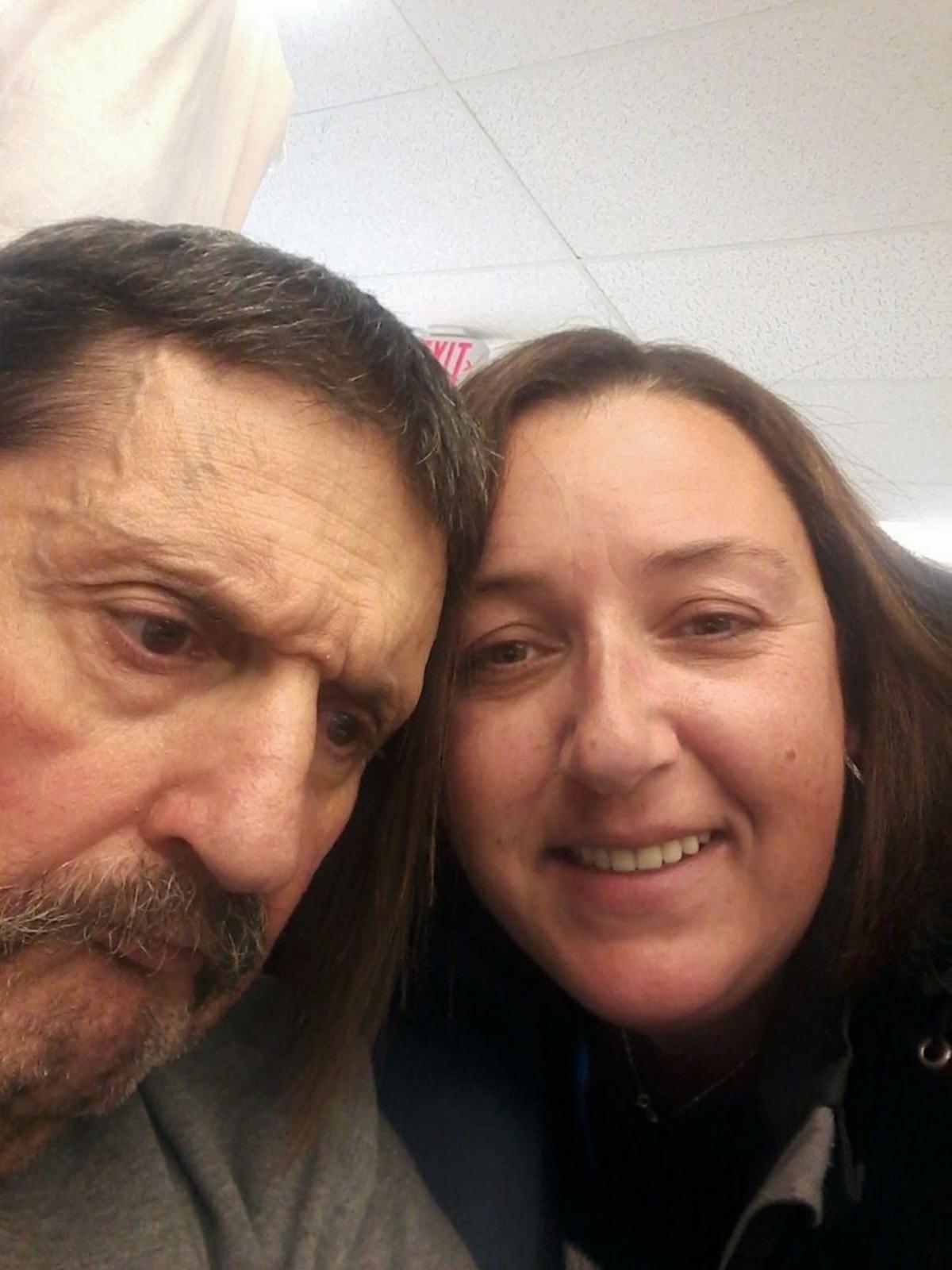 Contributed photo Sara Daigle, right, says her father James Daigle, left, was transferred from The Grand at Barnwell to another nursing facility in South Point, Long Island without her knowledge.

Bill Williams/Columbia-Greene MediaTransport buses outside The Grand Rehabilitation and Nursing at Barnwell, where more than 100 people have tested positive for COVID-19.

Contributed photo Sara Daigle, right, says her father James Daigle, left, was transferred from The Grand at Barnwell to another nursing facility in South Point, Long Island without her knowledge.

VALATIE — A local nursing home resident was transported to Long Island without his family’s knowledge on Monday, the man’s daughter said.

The Grand Rehabilitation and Nursing at Barnwell in Valatie transferred James Daigle to another care facility in South Point, Long Island, without telling his family, his daughter Sara Daigle said Tuesday.

Sara got a phone call Monday afternoon notifying her that her father had safely arrived at The Grand Rehabilitation and Nursing at South Point. But Barnwell did not contact Sara to tell her that her father, who tested negative for COVID-19, would be moved.

“I was very upset and shaking,” Sara said. “He was transported for four hours that nobody knew about and nobody was aware of.”

Seven Barnwell residents have died of COVID-19 and 117 have tested positive for the virus as of Tuesday, according to the Columbia County Health Department.

“We felt it was best to make the transfers in the interest of the vulnerable population to ensure that we had the best opportunity to maintain an excellence of care under the current circumstances,” Lawrence said.

Families were notified of the transfers by Barnwell staff, said Lawrence. Lawrence added that he speaks on behalf of the facility’s leadership.

“All family members, representatives and/or next of kin were contacted before the transfers,” Lawrence said on Tuesday.

Sara disputes that account. After being notified of her father’s arrival in Long Island, she reached the Barnwell administration by phone on Monday. She was told that they had tried to notify her of the transfer, but Sara says she did not receive any calls from the Barnwell staff.

“I have my phone on 24/7, there is no reason that anybody couldn’t get through,” she said, noting that her job requires her to be reachable at all times.

The Barnwell staff told Sara that 5th floor residents who tested negative, like her father, had been removed from the facility so that Barnwell could go into quarantine mode for two weeks.

Sara is concerned that her father, who is vulnerable to COVID-19, was sent into the epicenter of the pandemic. New York City and Long Island account for the vast majority of coronavirus cases in the state.

“I feel like you are putting a death sentence on my father,” she said, referring to Barnwell. “My father is 72. If he gets sick he will not be able to come back from that.”

James Daigle, a volunteer firefighter with the Chatham Fire Department for 25 years, was admitted to Barnwell more than four years ago after suffering a broken hip and a series of strokes. He lived on the 5th floor of the facility, where he was tested for COVID-19, along with the entire Barnwell community early last week.

The Columbia County Department of Health distributed testing kits to Barnwell and other nursing homes in an effort to understand how widespread the coronavirus is in local nursing home populations. Whittier Rehabilitation and Skilled Nursing Center, the FASNY Firemen’s Home and Livingston Hills Nursing and Rehabilitation Center each received enough kits to test all residents Friday, officials confirmed.

Sara has reached out to a nursing home advocate through the Columbia County Ombudsman program and intends to file a formal complaint with the state.

In the course of her father’s stay at Barnwell, shortstaffing has been an issue, Sara said.

Doreen Oakley, whose daughter-in-law works at Barnwell, said Barnwell staff are often required to work extra shifts due to the high number of staff members who have tested positive for COVID-19.

“My daughter-in-law has been mandated to stay a few times,” Oakley said. “She is exhausted but she does not complain, she just does it.”

Oakley organized a prayer vigil outside Barnwell on May 6 to show support for the staff and residents after the facility reported a one-day spike of more than 30 new COVID-19 cases.

“They have nobody up there,” Oakley said.

Barnwell Administrator Isaac Speilman said he could not comment on the transfer of Barnwell residents.

Barnwell is owned by Jeremy B. Strauss, CEO of The Grand Healthcare System, which operates more than a dozen nursing homes in the state. Strauss, based in Long Island, has an interest in more than 20 nursing homes, according to the state Department of Health.

Nora Mishanec is a reporter for Columbia-Greene Media. She can be reached at nmishanec@columbiagreenemedia.com or 518-828-1616 ext. 2495.