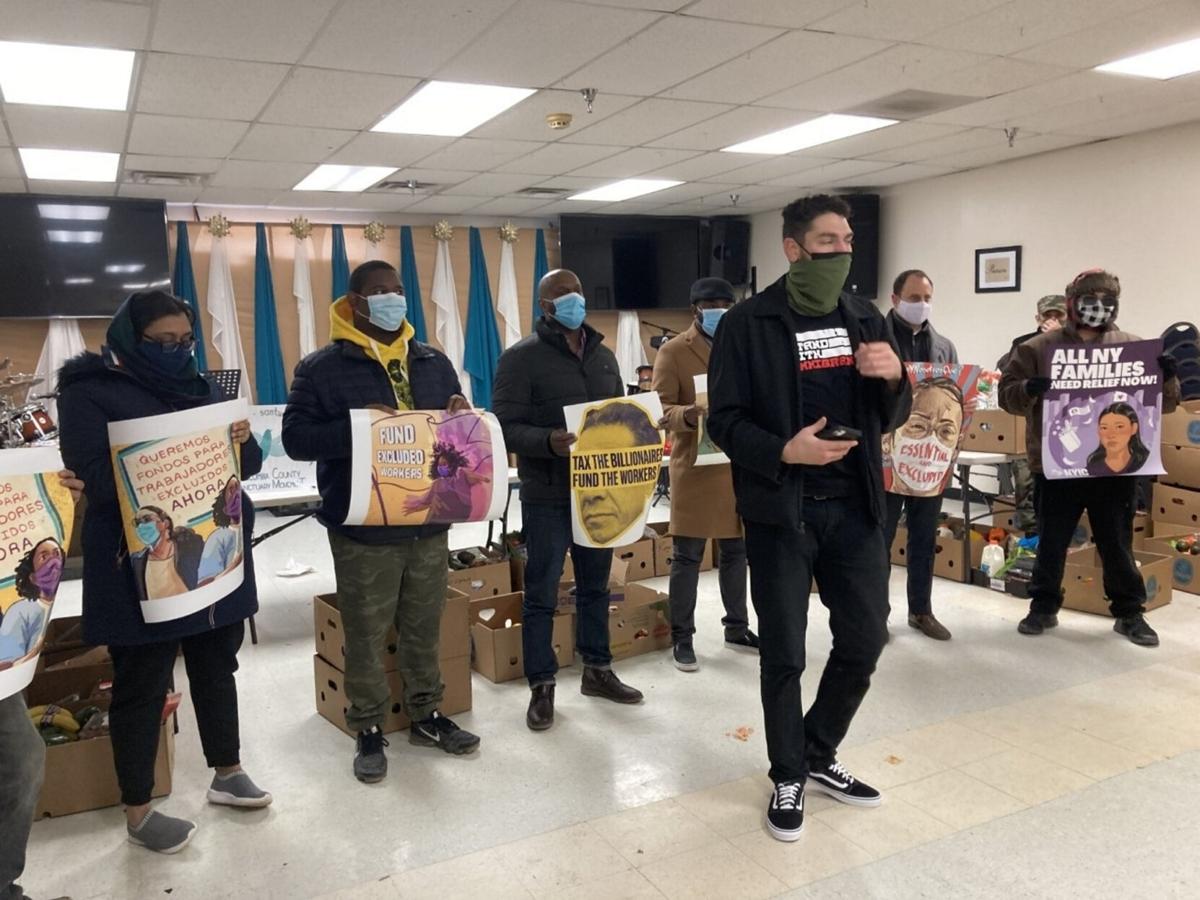 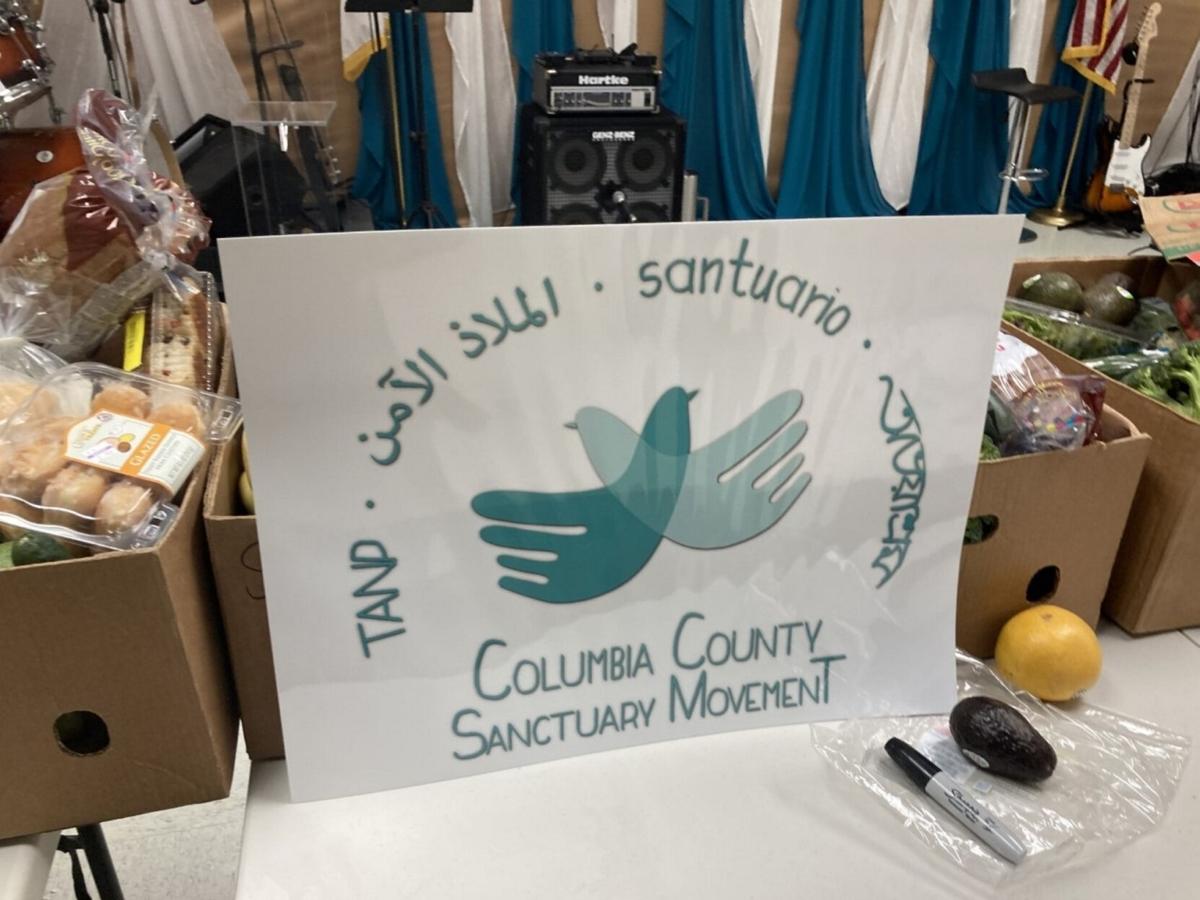 A Columbia County Sanctuary Movement sign sits among boxes of food that will go to local families. Natasha Vaughn/Columbia-Greene Media

A Columbia County Sanctuary Movement sign sits among boxes of food that will go to local families. Natasha Vaughn/Columbia-Greene Media

HUDSON — The Columbia County Sanctuary Movement on Friday held a forum that was part press conference to talk about immigrant workers who have been excluded from COVID-19 relief.

Local elected officials and community members discussed the ongoing issues with the lack of funding available to excluded workers.

“We are here today to show that this is a statewide issue; there are excluded workers everywhere,” said Columbia County Sanctuary Movement Executive Director Bryan McCormack. “They are in our restaurants, they are in our farms and they are on the front line of this pandemic. Some people ask who are the excluded workers that we’re talking about? The three main categories are undocumented folks, people who were recently released from incarceration and therefore don’t have the job history to qualify for unemployment, as well as cash economy workers, street workers and domestic workers.”

The conference in Hudson was one of five held across the state Friday urging elected officials to support excluded workers during the pandemic, many whom are unable to receive unemployment, pandemic unemployment money or federal stimulus aid.

McCormack and others emphasized the disconnect between the haves and have-nots, questioning why billionaires are able to make a profit during the pandemic when excluded workers are struggling to pay for their basic needs because they don’t have access to funding.

“I think that we’re leaning on our higher elected officials to really support those who have been excluded from relief,” Hudson Mayor Kamal Johnson said. “They are a population that is the same as all populations in dealing with issues of isolation, lack of health care, not being able to pay rent or put food on the table, and we’re in a pandemic now so they really need help right now.”

Johnson said local governments and communities have been doing all they can to help residents during the pandemic, but it falls short to help everyone who needs it.

“We need the state’s support,” Johnson said. “It’s supposed to be for the people, by the people, and that means all people, not just some. We’re in a pandemic now, we need help now, we need action now.”

Last year New York state looked at proposed legislation to create a billionaire tax that would be levied against residents with $1 billion or more in net assets and directs revenue from the tax into a worker bailout fund. It would have established a bailout program providing workers who were traditionally excluded from wage-protection programs access to unemployment benefits.

“Domestic and gender-based violence has skyrocketed throughout the pandemic,” said Jarin Ahmed, an organizer of Jaago Hudson, an organization that takes a stand against gender-based violence in the community. “Survivors of abuse continue to suffer at the hands of their abusers because financial dependency is preventing them from leaving. Excluded workers who are survivors need relief now. Excluded workers who are survivors need relief yesterday.”

Ahmed said New Yorkers and the nation as a whole cannot keep turning away excluded workers.

“It’s our job to point out that this is a problem,” Hudson 3rd Ward Supervisor Michael Chameides said. “I think that during the pandemic giving people economic support is good for our health. You need to give people support so they can make healthy choices. People are going to work when they are sick but they need the money, and that’s bad for everyone because that’s just going to spread the virus.”

Chameides also noted that if people cannot pay for their housing they may end up staying with friends or relatives, which could also spread the virus.

There were other press conferences going on throughout the state in support of excluded workers in Kingston, Albany and Syracuse to get the word out, McCormack said.

You Can Help Create a Future with Better Lyme Disease Diagnosis

How Schools Brought Community Together, Even While Apart