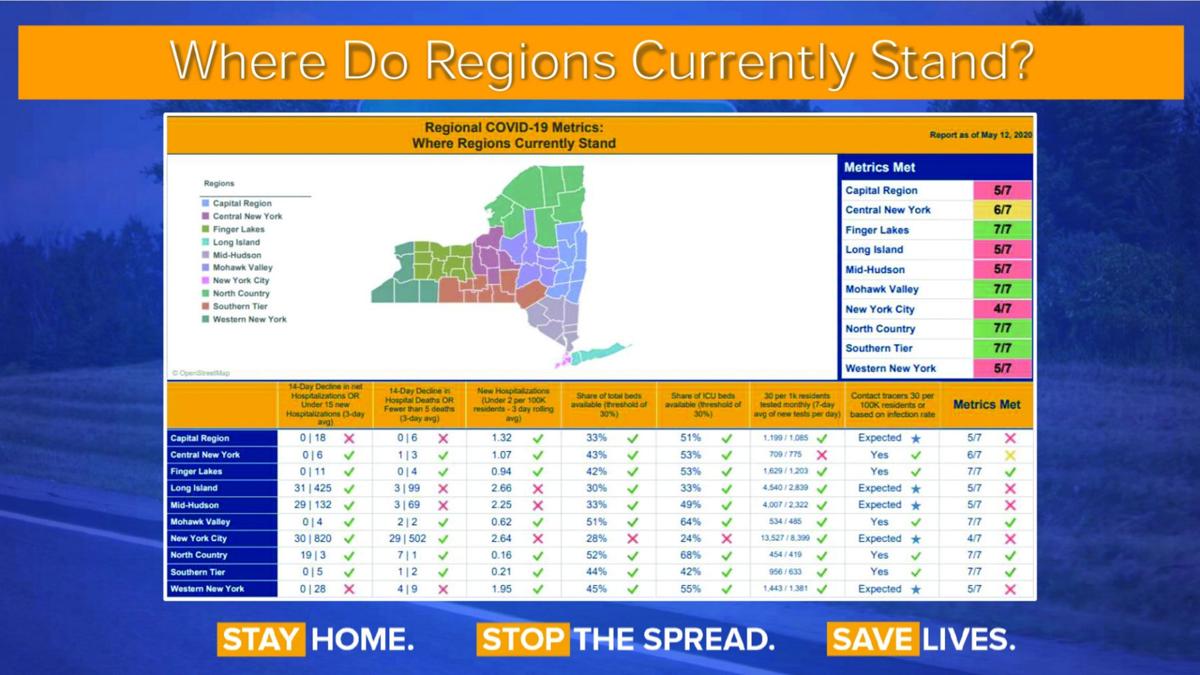 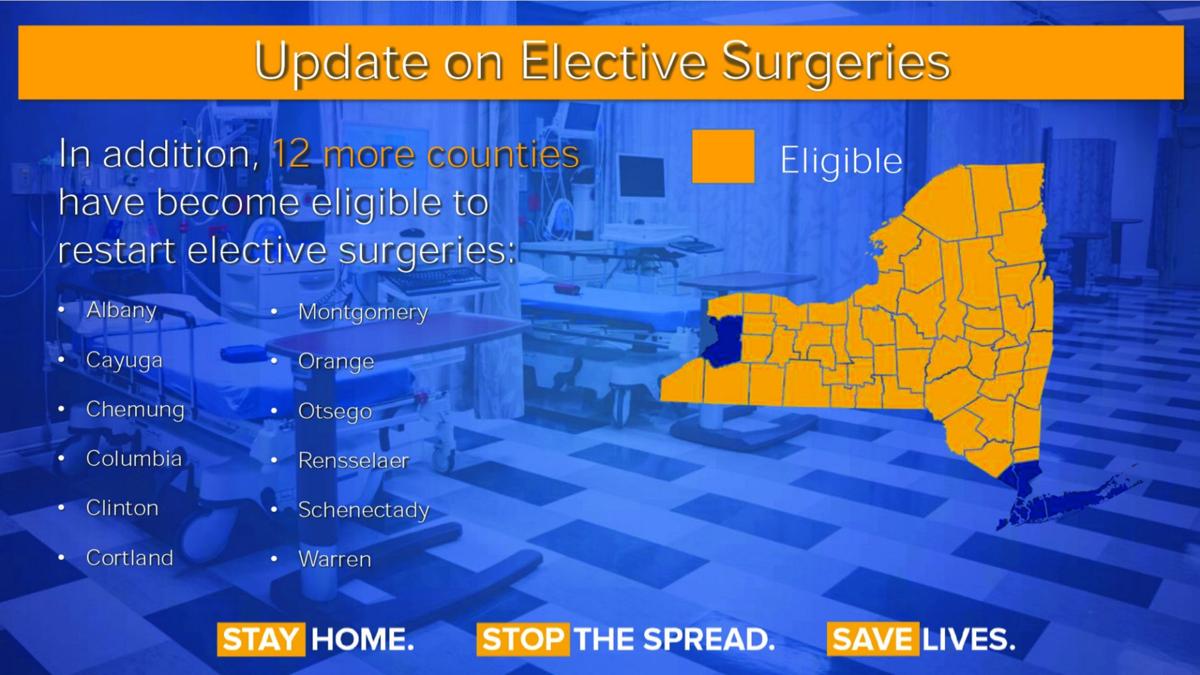 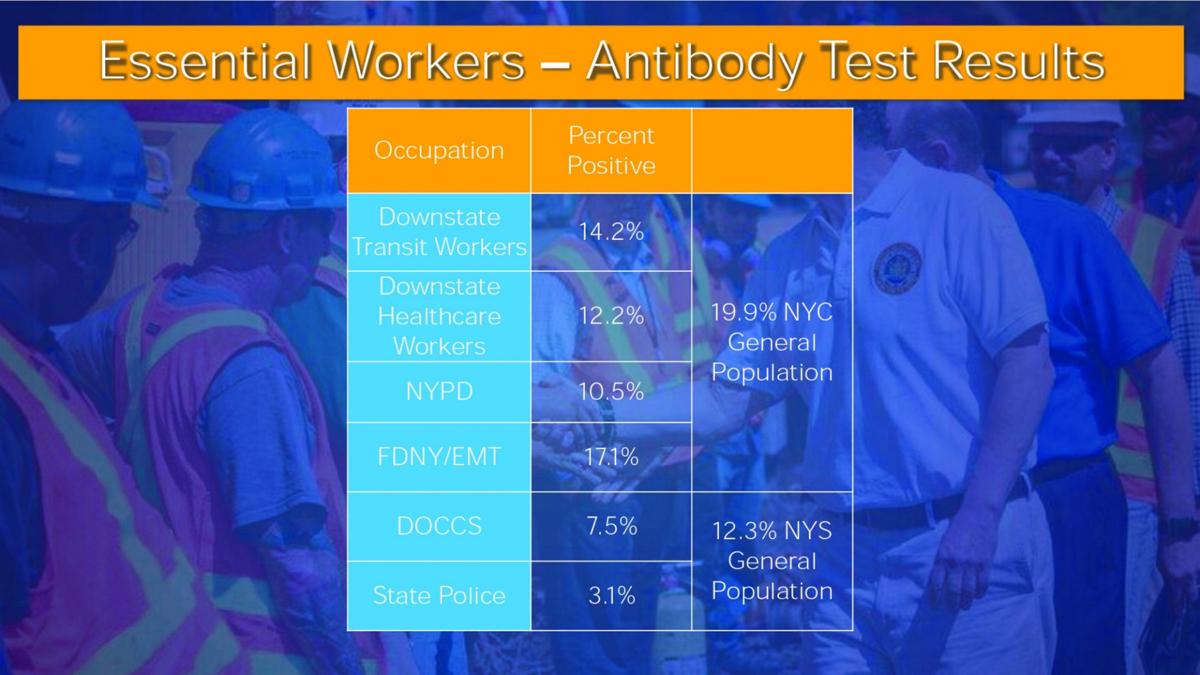 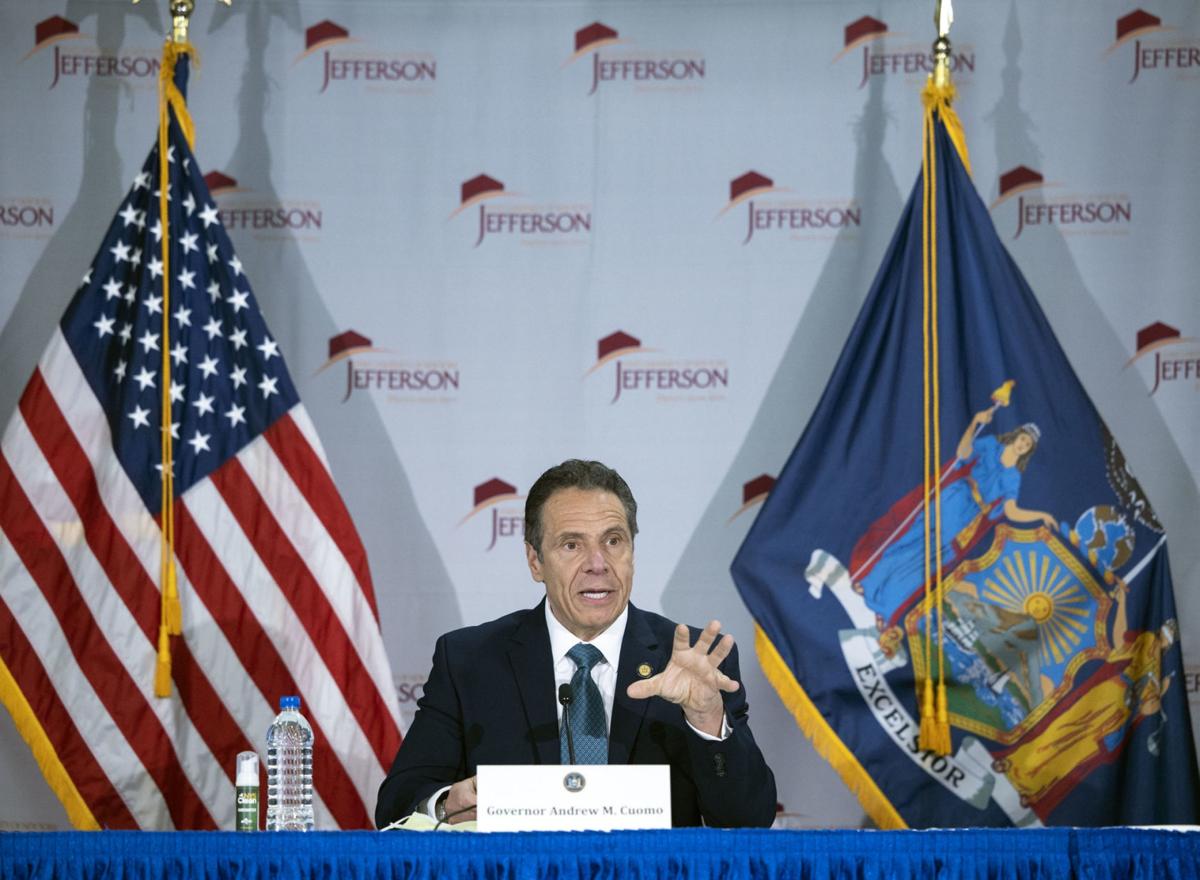 Courtesy of Gov. Andrew Cuomo’s officeGov. Andrew Cuomo annonced at a coronavirus COVID-19 briefing in Watertown on Wednesday that the state’s North Country region is ready to start reopening businesses after the NY On Pause order expires Friday.

Courtesy of Gov. Andrew Cuomo’s officeGov. Andrew Cuomo annonced at a coronavirus COVID-19 briefing in Watertown on Wednesday that the state’s North Country region is ready to start reopening businesses after the NY On Pause order expires Friday.

WATERTOWN — New York’s North Country region will start to reopen at the end of the week, Gov. Andrew Cuomo said Wednesday, but the Capital District will not be ready after a spike in COVID-19 hospitalizations.

Regions are cleared to open after meeting seven criteria about an area’s coronavirus hospitalization, infection and death rates, available hospital beds, testing and tracing capacity. Regions will resume construction and manufacturing industries first with phase I of the state’s four-phase reopening plan.

“Four regions have now met all seven metrics required to begin reopening,” Cuomo said Wednesday during a briefing at Jefferson Community College. “We’re doing something in this state that no other state is doing — we are having a transparent discussion about the reopening operations because it only works if people understand it and are part of it.”

On Tuesday, the Capital District region had one criterion left to meet to reopen construction and manufacturing businesses at the end of the week. The region, which includes Columbia and Greene counties, had a setback Wednesday and has to satisfy two criteria to start reopening the economy after a spike in COVID-19 hospital patients.

The region had 121 virus patients in the hospital Wednesday, up from 104 Tuesday, according to the state’s regional tracker at forward.ny.gov.

To reopen, the state mandates an area must have a three-day average of a 14-day decline in net COVID-19 hospitalizations or under 15 new virus patients. The Capital District must also see a 14-day decline in hospital deaths, or fewer than five deaths in that period, to start reopening.

The state saw 166 virus-related deaths Tuesday, including 122 in hospitals and 44 in nursing homes. The death rate is fluctuating slightly, but remains flat after 195 fatalities Monday, 161 Sunday and 207 Saturday.

The state tested 1,258,907 people as of Wednesday, revealing 340,661 total positive cases of COVID-19. New York’s hospitalization rates continued a downward trend to 6,946 patients Wednesday, down 117, according to the governor’s office.

“We have hopefully come through the worst,” Cuomo said.

The study showed downstate frontline workers were infected with the virus less than New York City’s general population of 19.9%. The survey of more than 20,000 frontline workers showed 14.2% of transit workers, 12.2% of health care employees, 10.5% of the New York Police Department and 17.1% of New York City firefighters and 17% have COVID-19 antibodies, or were exposed to and recovered from the illness.

“You know what that means? That means PPE works,” the governor said. “Masks work.”

New York hospitals have 102 reported cases of virus-related illnesses in children — up from 100 cases Tuesday. Sixty percent of children with these symptoms tested positive for the virus with 40% testing positive for COVID-19 antibodies. About 14% were positive for both.

Of the state’s cases, 43% were hospitalized and 71% were admitted to intensive care.

“It does not present as a normal COVID case,” Cuomo said. “Parents have to be aware of this. It’s a wide array of symptoms as you can see, which makes it even harder for a parent to know exactly what they’re dealing with.”

Medical attention should be sought immediately when a child has a fever lasting more than five days, severe abdominal pain, diarrhea or vomiting, a change in skin color, such as turning pale or blue, trouble breathing, decreased amount or frequency of urination, racing heart rate or infants having difficulty feeding or drinking fluids, according to the governor’s office.

The House of Representatives is scheduled to vote on its fifth coronavirus package, named the Heroes Act, on Friday. As it stands, the bill is expected to give $34.4 billion to New York, including $17.2 billion for New York City and $15.1 billion for other municipalities, according to a statement from U.S. Sen. Chuck Schumer’s office.

The act proposes to repeal the controversial State And Local Tax deduction, which allowed taxpayers of high-tax states to deduct local tax payments on their federal tax returns. Cuomo praised the proposed SALT repeal, saying it costs the state $29 billion.

“Our local governments here at home have managed our COVID-19 response and have done so while confronted with a shrinking tax base,” Delgado said Wednesday. “I am pleased to see the formula devised in my Direct Support for Communities Act included in the Heroes Act. The formula, which has both bipartisan and bicameral support, will ensure that every county, city, town and village in the country receives federal funding, regardless of size. These needed funds will support those providing essential services, from public health, to law enforcement, to firefighters, to teachers and beyond.”

Under the Direct Support for Communities Act, local relief funding would be split 50/50, with half committed to cities, towns and villages, and half committed to counties. The portion of emergency fiscal assistance for counties would be allocated across all counties based on population.

Cuomo continued his plea for the fourth day in a row Wednesday for federal funding for state and local governments, saying the state needs $61 billion in federal support to fund things like school districts, hospitals, police, firefighters and other essential services.

“The Washington bill should provide real, economic stimulus to help our nation rebuild,” Cuomo said of potential to improve national infrastructure. “Need to stimulate the economy and create jobs — what every president has said, but none has done, Democrat and Republican.

“The future of the state budget is purely a function of what we get from Washington. I can’t make up $61 billion. That’s a larger budget hole than this state has ever faced.”