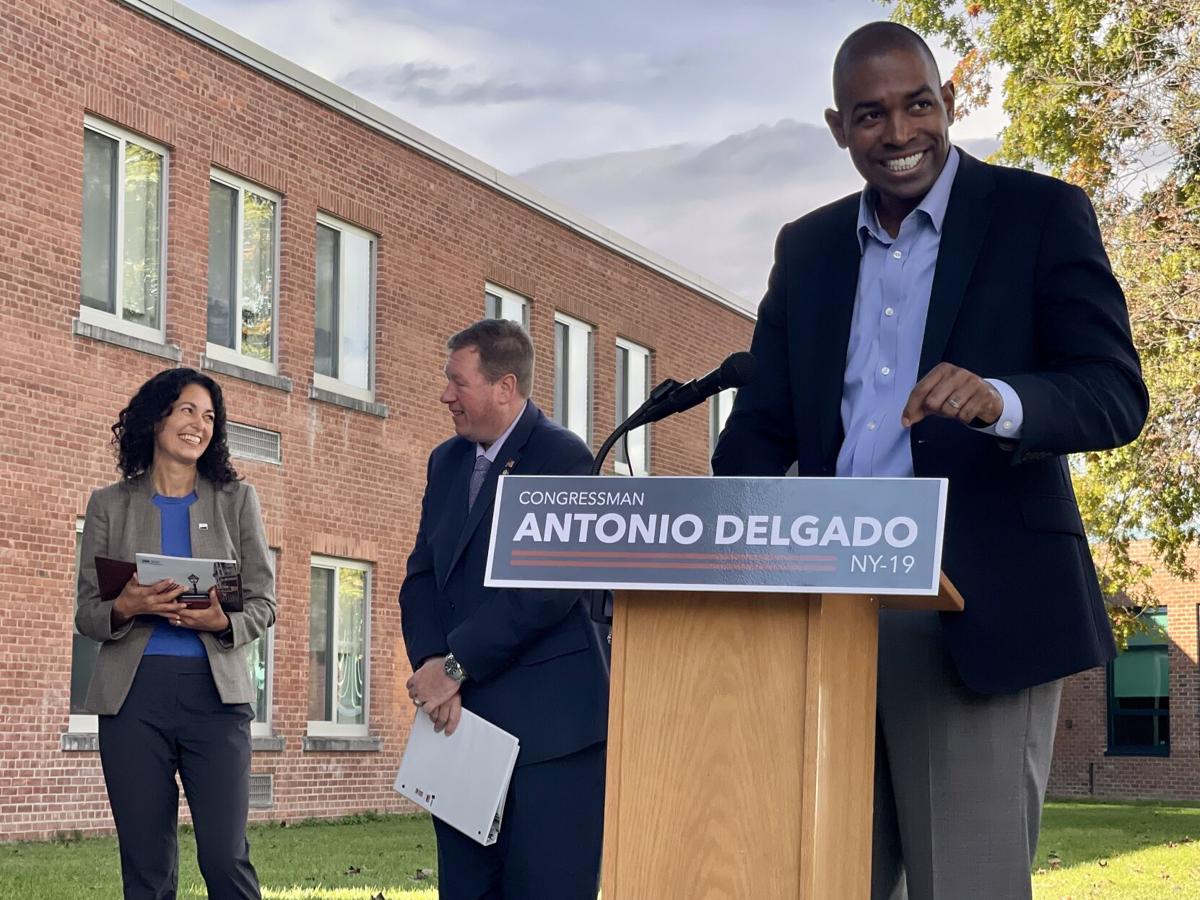 U.S. Rep. Antonio Delgado, D-19, announces $1.15 billion for the third round of USDA grants to fund broadband build-outs in rural communities, like in Greene and Columbia counties, outside Catskill High School on Saturday. 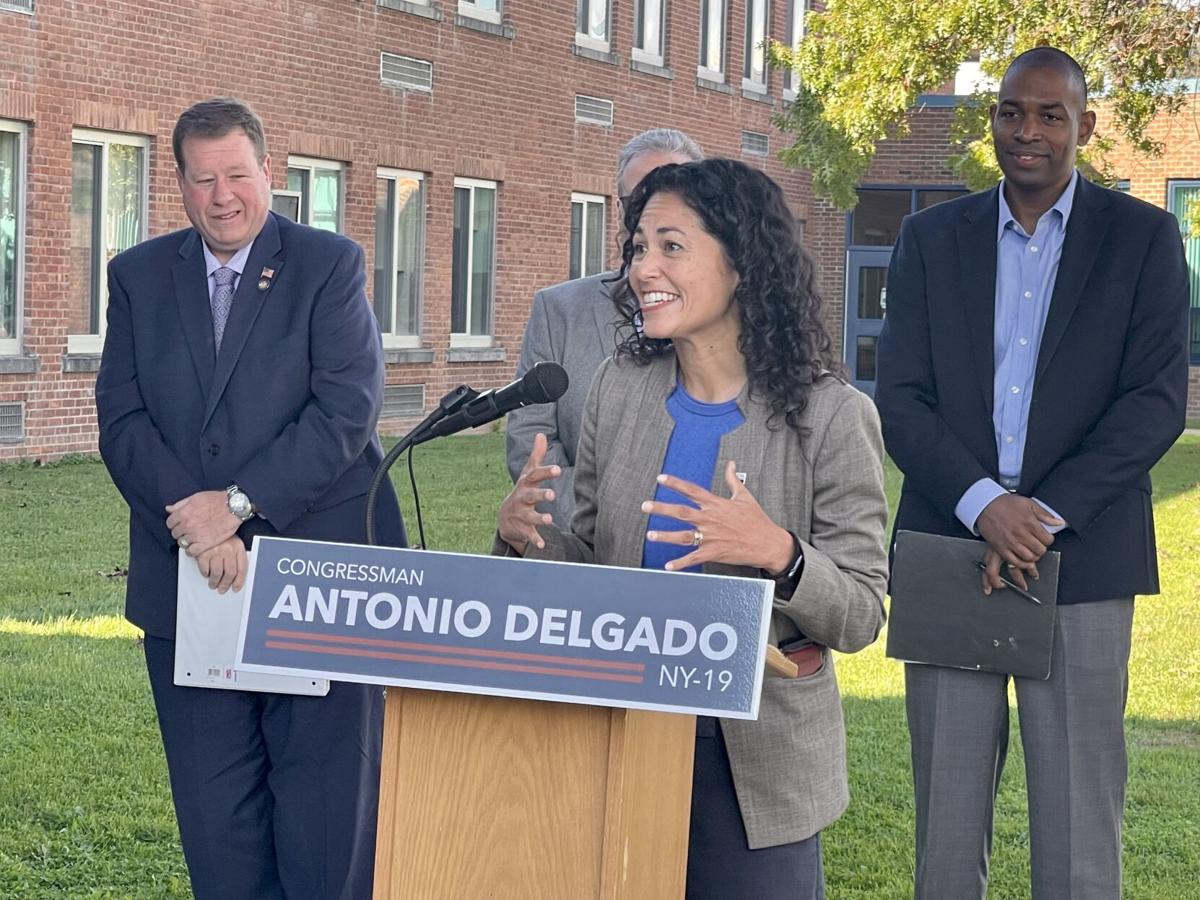 U.S. Department of Agriculture Under Secretary Xochitl Torres Small announces $1.15 billion in available USDA grants for rural broadband build-outs outside Catskill High School on Saturday. The funding will be prioritized for communities with lacking broadband internet connection, common throughout Columbia and Greene counties and the 19th District.

U.S. Rep. Antonio Delgado, D-19, announces $1.15 billion for the third round of USDA grants to fund broadband build-outs in rural communities, like in Greene and Columbia counties, outside Catskill High School on Saturday.

U.S. Department of Agriculture Under Secretary Xochitl Torres Small announces $1.15 billion in available USDA grants for rural broadband build-outs outside Catskill High School on Saturday. The funding will be prioritized for communities with lacking broadband internet connection, common throughout Columbia and Greene counties and the 19th District.

CATSKILL — Local officials can start applying next month for billions of dollars in federal aid reserved for broadband build-outs in rural communities, aiming to connect the 1,300 remaining Greene County addresses without internet.

U.S. Department of Agriculture Under Secretary Xochitl Torres Small met with Greene County broadband service providers and utility owners, legislators and state and federal representatives at Catskill High School on Saturday on her first stop of a national tour to announce an investment of $1.15 billion under the USDA ReConnect Program.

“You’ve heard a lot about the common challenges that you all are facing in reaching that truly last mile,” Torres Small said. “I think the theme has been public safety ... to making sure that people can get the health care and services they need in an emergency ... so they can get direct telemedicine at their door, making sure that we know that no matter where in the country, you are you have that fundamental public safety.”

Most of Greene County’s remaining households without internet are concentrated on the mountaintop — one of the county’s most desolately populated areas.

“The mountaintops can thrive if they have that basic infrastructure to compete when it comes to the services and the expectations folks have when they want to enjoy this incredible, incredible place,” she added.

Applications for the third round of the federal ReConnect Program open Nov. 24 through February to cover costs of construction, improvement or acquisition of facilities and equipment needed to provide broadband service in eligible rural areas.

Grants, loans and a combination are available up to $25 million and $50 million for each community, depending on the requested project and award. Areas with the lowest connection rate will be prioritized.

About 186 miles of roadway in Greene County lack the fiber cables or infrastructure to connect each southern Capital Region residence to the internet, Deputy County Administrator Warren Hart said.

“We went from one of the counties that had the smallest amount of coverage to, today, we have 96% coverage of residents of addresses in Greene County,” Hart said. “Approximately 1,300 addresses still need broadband access, and for those households, it is vitally important that we serve 100%... and that we still need to work with our partners to pole fiber.”

The county’s broadband utility companies, including Mid-Hudson Cablevision, Verizon, Spectrum, StateTelephone Company and others, have expanded high-speed internet infrastructure securing millions of dollars in federal and state grants over the last several years.

“Greene County has a very positive broadband story to tell; It’s one of progress, partnerships, and a lot of persistence,” Hart said. “I’m pleased that we’ve made this much progress to date, and there’s more work to be done.”

Torres Small has a close working relationship with U.S. Rep. Antonio Delgado, D-19, who she previously served with on the House Agriculture Committee. Delgado, a member of the Rural Broadband Caucus and Rural Broadband Task Force, represents all of Columbia and Greene counties within the 19th District — the nation’s eighth-most rural district.

The funding will help communities across the 11 counties within the district that have struggled for years to access high-speed broadband internet, which help students taking classes remotely, small business owners trying to build their following, farmers using digital tools for success, senior citizens or veterans using telehealth medicine and more, Delgado said.

“What we’re talking about here is a basic necessity — that’s it,” the congressman said Saturday. “We’re not talking about luxury, we’re talking about something that every single American needs to have in the 21st Century. And this ReConnect program is a part of the puzzle — a big part of making sure that we get to a place where we can have 100% coverage.”

One in 3 of those households are low-income, or surviving on fewer than $20,000 annually.

“The report said that, predominantly, rural communities are the ones that are being left behind — as high as 23%,” Delgado said. “So we’re going to do all we can to make sure we close the gap here [and] finish that last mile.”

Detailed application and eligibility information is available at usda.gov/reconnect

President Joe Biden’s infrastructure plan, which passed the Senate in August, would steer $65 billion toward improving and expanding broadband with a stated goal of delivering reliable high-speed internet to every household in the nation, a promise he made as a presidential candidate.