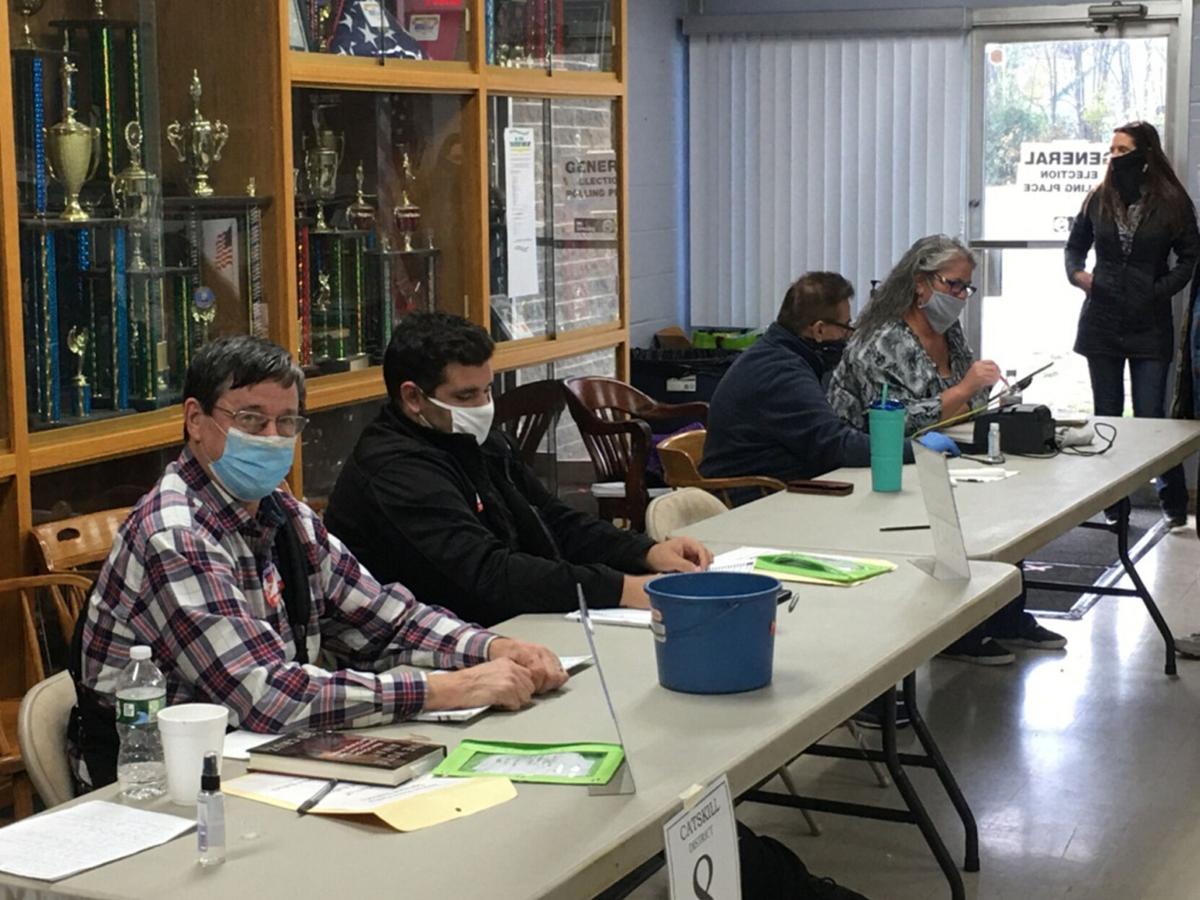 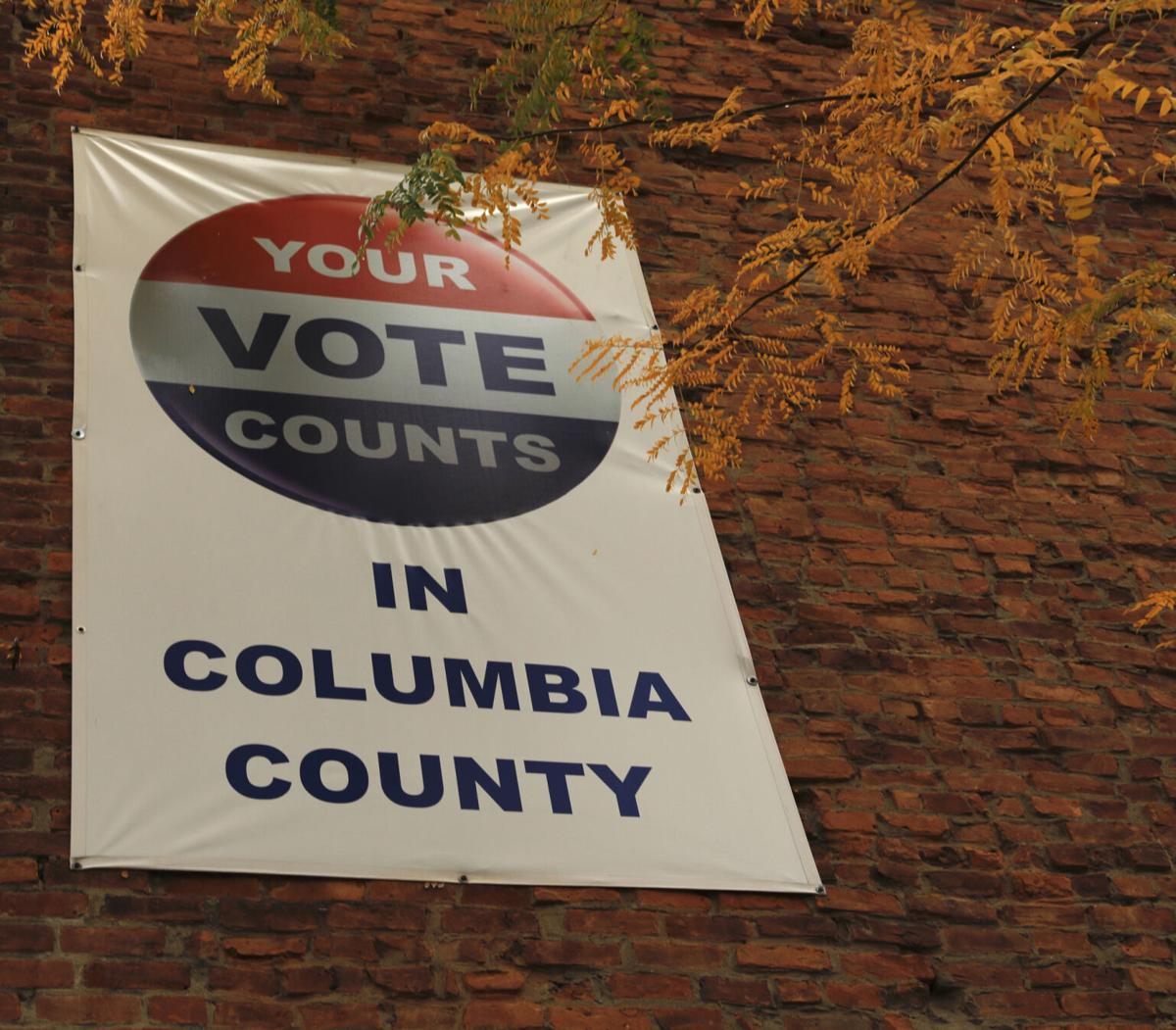 A sign continues to hang on a building on Warren Street in Hudson encouraging Columbia County residents to vote in November 2020. Aliya Schneider/Columbia-Greene Media

A sign continues to hang on a building on Warren Street in Hudson encouraging Columbia County residents to vote in November 2020. Aliya Schneider/Columbia-Greene Media

Twin County in-person voters generated few surprises with the majority-supported candidates in Tuesday’s presidential, congressional and state races, leaving Columbia and Greene counties to lean toward opposite sides of the political aisle.

Voting processes and schedules were largely uninterrupted in the Twin Counties and Capital Region amid the COVID-19 pandemic, but it caused an influx of absentee ballot requests.

The Greene County Board of Elections received requests for 4,708 absentee ballots countywide, with 3,960 returned as of Thursday afternoon while 4,288 residents participated in early voting.

“Given the volume of paper, it will certainly take a few days,” Bogardus said. “The unknown is how aggressive either campaign decides to get in challenging ballots.”

About 14,000 Columbia County residents participated in the state’s early voting period, which ran from Oct. 24 through Nov. 1, and about 7,500 returned absentee ballots.

“How long [it will take] is hard to predict,” he said. “If the campaigns are going to review and challenge ballots, then it will go slowly and it will probably take a couple of days.”

The county has advanced scanning technology and equipment to allow for the rapid counting of absentee and affidavit ballots, which are not typically opened in the state for a week following Election Day.

“Locally, this is all pretty normal,” Dow added. “The numbers, the paper ballots are higher than usual, but the procedure is quite standard. This is a very normal schedule.”

“That has not really occurred to any extent,” he said of Greene County. “It’s very minimal, but at the end of the day, the state board works to make sure it’s eliminated.”

Absentee ballots will start to be opened Monday morning pending a decision at a state Supreme Court conference Friday afternoon concerning petitions filed by both major-party candidates in the 46th Senate District race.

Republican Richard Amedure, leading with 53% of the vote and securing 64.3% of Greene County’s vote, filed a petition with the state and local county boards of elections in the district Tuesday requesting all paper ballots, including early voting and absentees, be preserved in case of a necessary recount.

Democrat Michelle Hinchey received 35% of Greene in-person support Tuesday, or 46% of the district’s vote without absentee or affidavit ballot counts. Hinchey filed a similar brief to be reviewed by the court Friday before mail-in ballots can start to be tallied.

“It’s fundamentally to make sure both campaigns get a equal opportunity to view the opening of the ballots, do any research they want to do to object to ballots if they feel they’re not proper,” Bogarde said.

About 51.4% of Columbia County residents who cast ballots Tuesday supported the Biden-Harris ticket with 14,148 votes to 12,883, or 46.8% for Trump-Pence without absentee or affidavit ballots included.

“It’s clear the county has become more Democratic over time,” Kanaga said Thursday. “There was an increase in total voter registrations from 2016 to 2020 of 5,011, of which 4,473 were Democrats, so it’s clearly a positive trend for Democrats.”

The county narrowly supported Kinderhook resident Republican John Faso in 2016 with 50.5% of the vote to 45.6% for Democrat Zephyr Teachout. The county flipped for Democratic support for the congressional seat in 2018 with 55.8% for Delgado and 40.4% for Faso.

Second homeowners changing their voting district registration upstate or relocating in the wake of the COVID-19 pandemic could have skewed Columbia voters more liberal, but Kanaga said the reason is unclear.

“Your guess is as good as mine what people’s motives have been,” he said. “For whatever reason, we seem to have more Democrats who seemed to have voted absentee [in 2020] than other parties. So my hope is that of the outstanding absentee ballots, the majority of them will be cast for Democratic candidates.”

“The county has historically supported our Republican candidates,” Bogardus said.

Greene County voters largely threw support to Trump in 2016 with 59.3% of the vote compared to 33.6% for Democrat Secretary of State Hillary Clinton and vice presidential candidate U.S. Sen. Tim Kaine, D-Va. Third-party candidates received between 2% and 3% of the vote countywide in the last presidential race.

“Election Day went really well,” Bogardus said. “Unfortunately, there were longer lines than normal — not horrible, but given the volume of voters and that we’re trying to run an election in the COVID period, everything took a littler longer than normal.”

Poll workers were diligent to disinfect booths in between voters to reduce the risk for spreading COVID-19.

“This was all new to the process,” Bogardus added. “With that said, we had a tremendous volume of voters and the districts did a tremendous job really quickly and safely as possible.”