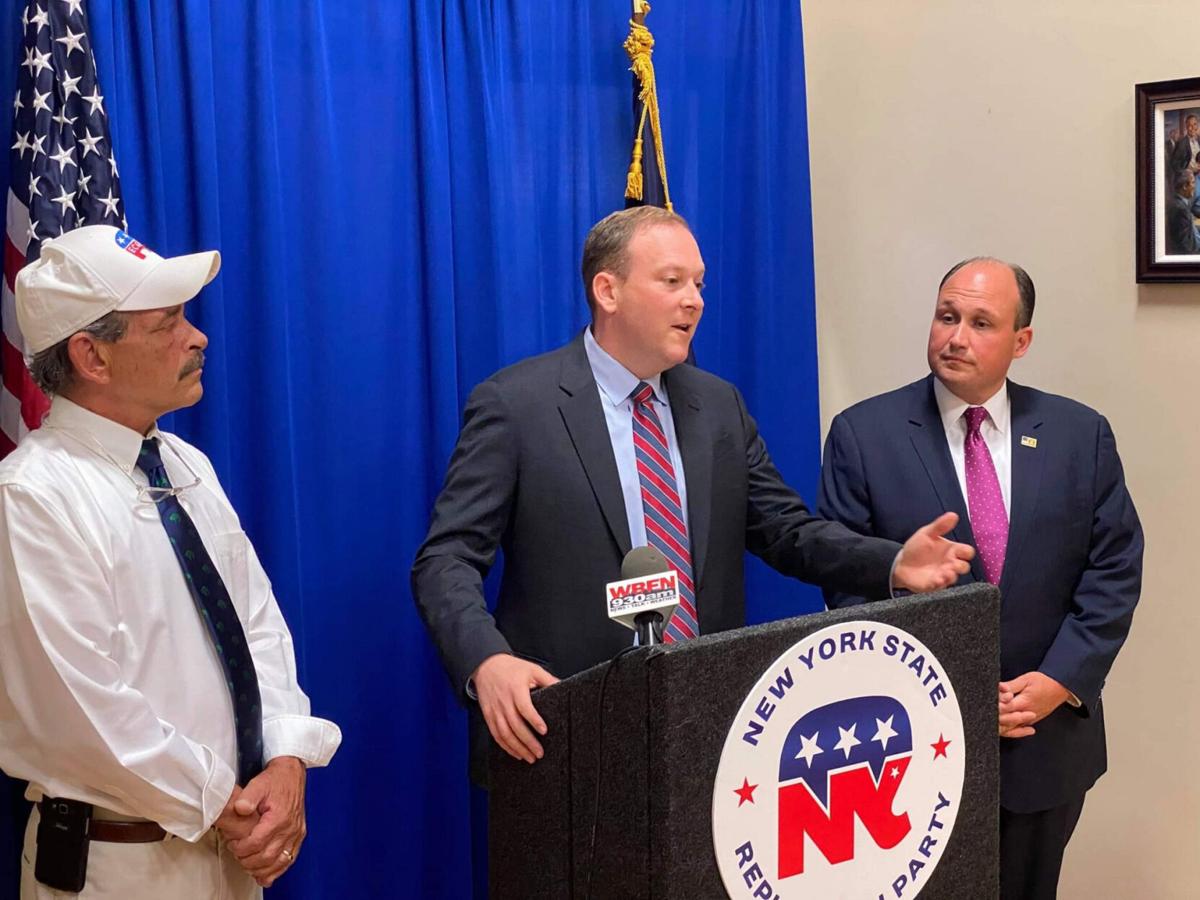 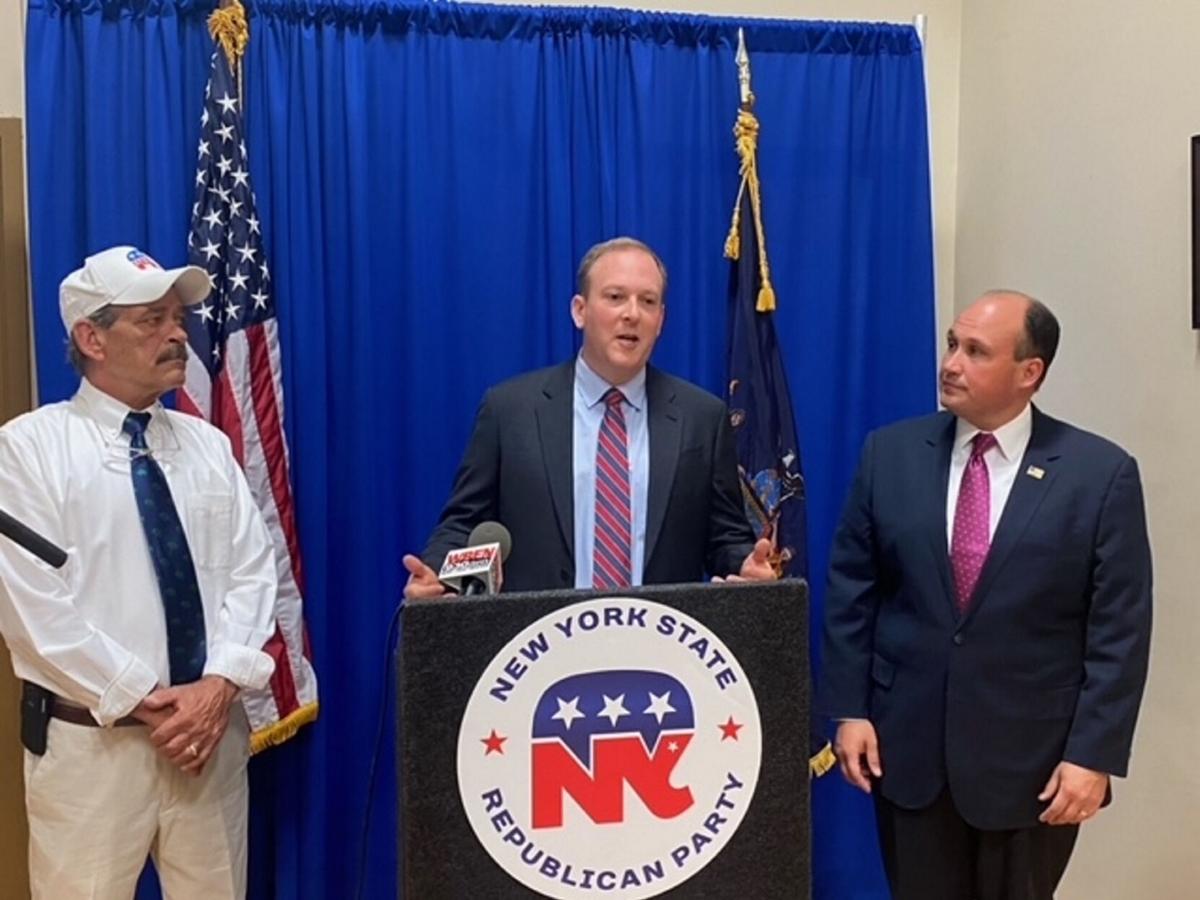 BUFFALO — The state’s presumptive Republican nominee in next year’s gubernatorial election cast doubt Wednesday on Gov. Andrew Cuomo’s intentions in declaring a gun violence a disaster emergency, pleading with New Yorkers to vote Democrats who control federal and state government out of office.

Congressman Lee Zeldin, R-1, was quick to criticize Gov. Cuomo’s Tuesday executive order and seven-step plan to combat surging gun violence in New York City during a visit to Buffalo on Wednesday as part of his campaign. The governor outlined a $138.7 million plan to combat the gun violence Tuesday.

“Cuomo said he wants to tackle guns the way he tackled COVID ... You don’t have to just sit back and allow Andrew Cuomo to continue to just selfishly try to earn his next Emmy award or his next book deal at your expense,” Zeldin said to potential swing voters, noting Cuomo’s Emmy award for his daily televised coronavirus press conferences last year and his $5.1 million book deal to publish “American Crisis: Leadership Lessons from the COVID-19 Pandemic.”

“Instead of putting handcuffs on criminals, we’re putting handcuffs on police,” Zeldin said of reversing cashless bail. “...There’s this effort [of lawmakers] tripping over each other sticking up for the criminal ... while law enforcement, innocent bystanders are being left behind.”

Shootings, homicides, burglaries and car thefts have exponentially increased in most U.S. cities in 2020, while other crimes, like sex offenses, declined. Each of those violent crimes and felonies remain eligible for cash bail in New York.

“If this bargain bin Trump wants to reuse Trump’s debunked talking points from his failed campaign, so be it,” Rich Azzopardi, Gov. Cuomo’s senior adviser said in a statement Wednesday. “This is New York and New Yorkers aren’t stupid.”

Wednesday marked Zeldin’s sixth visit to Buffalo as part of many statewide stops and tours this year in his campaign for governor.

Zeldin, a strong supporter of President Donald Trump, made a point Wednesday to distinguish himself from the former commander-in-chief.

“I have always very proudly been my own man,” the Long Island congressman said. “When I stand here talking about the need to revere cashless bail, eliminate critical race theory from all our schools, and that they shouldn’t be required to get vaccines to be in the classroom, that’s me talking right in front of you.”

State Republican Party Committee leaders have named Zeldin the party’s presumptive candidate in the November 2022 governor’s race after 85% of Republican leaders in the state’s 62 counties threw support behind the former two-term state senator in a preliminary straw poll taken at a meeting in Albany on June 28.

Zeldin, a U.S. Army Iraq veteran, also serves in the Army Reserves as a lieutenant colonel.

“We have great Republicans and leaders who have stepped forward, but the vote for Lee was an unquestionable mandate of support that shows the strength and the momentum of his candidacy across the state,” New York Republican Party Committee Chairman Nick Langworthy said in Buffalo on Wednesday. “He could have sat in that congressional seat and been there for another decade, he could have been in the position to be a committee chair when the Republicans take the House in 2022, but he’s put that bridge behind him because he understands the mission before us is that important.

“...He couldn’t sit on the sidelines as our state is destroyed by the radical left and the ideology that’s permeating our schools, our community institutions and certainly is festering within our government and Andrew Cuomo’s rampant corruption and mismanagement has destroyed the state that we knew and we love.”

Other GOP candidates, including former Westchester County Executive Rob Astorino, who lost the governor’s race to Cuomo in 2014, and Andrew Giuliani, the son of former New York City Mayor and Donald Trump attorney Rudy Giuliani, continue to campaign for the Republican nomination.

Astorino received 5% of support in the straw poll, while Giuliani failed to receive any support among the GOP county committees. About 10% of attendees abstained.

Zeldin supports reversing bail reform and other Democrat-backed criminal justice reforms to strengthen support for law enforcement, rescinding the requirement for students to wear face masks in school or at summer camp and does not support mandating the COVID-19 vaccine for New York students of any age.

The congressman urged the state Legislature to impose term limits and cap New York governors to serve for two terms. If elected, Zeldin would only serve two terms, he said, regardless of the state’s policy.

“People feel like this is a last stand, people feel like this is the last, great opportunity to save New York,” he said. “I’m in this to help restore our state to glory. Losing is not an option in this race, it’s not an option for any of us. Millions of New Yorkers are ready to vote right now. They want critical balance in Albany. Andrew Cuomo has been there too long. It’s time for him to go.”