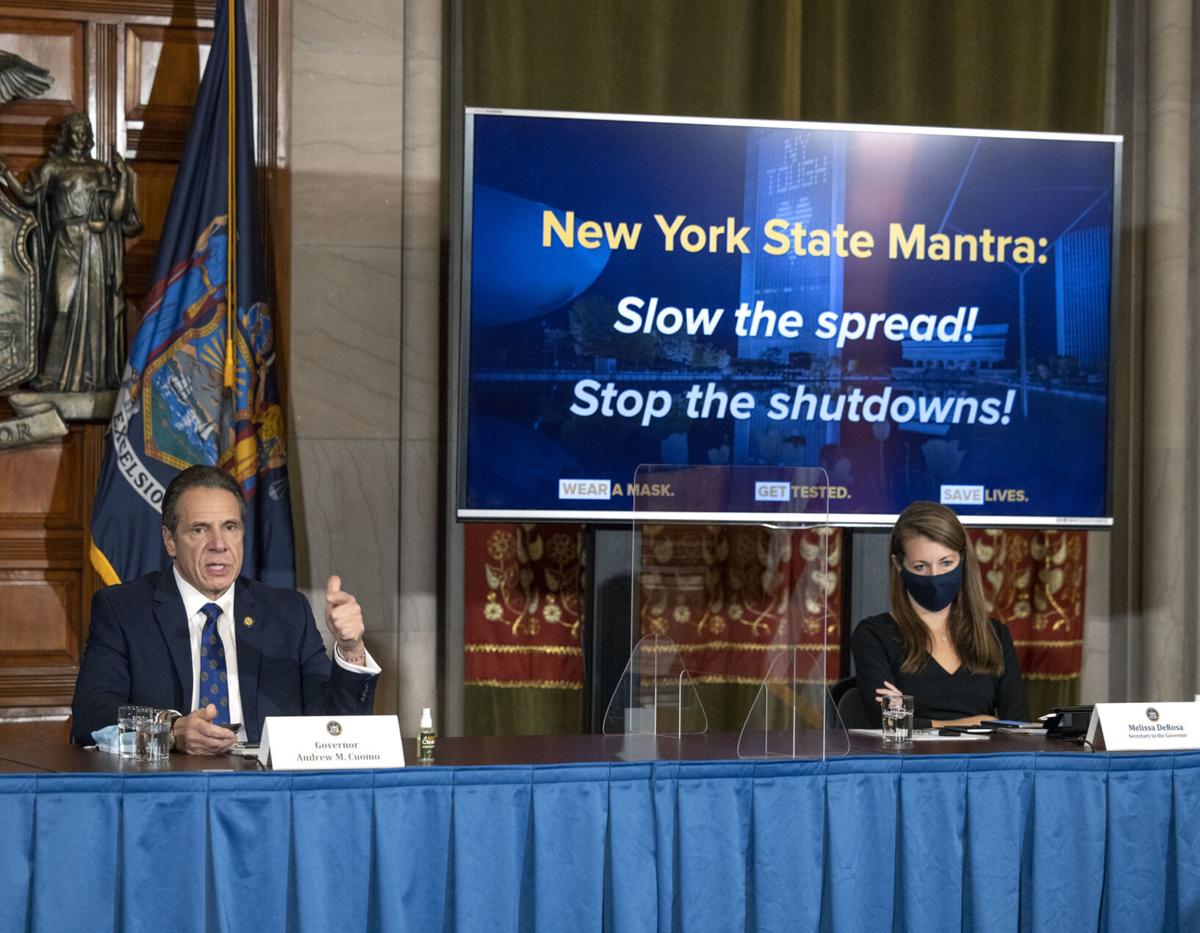 Gov. Andrew Cuomo, left, and Secretary to the Governor Melissa DeRosa during a COVID-19 briefing in the state Capitol in Albany on Dec. 18. Courtesy of Gov. Andrew Cuomo’s Office 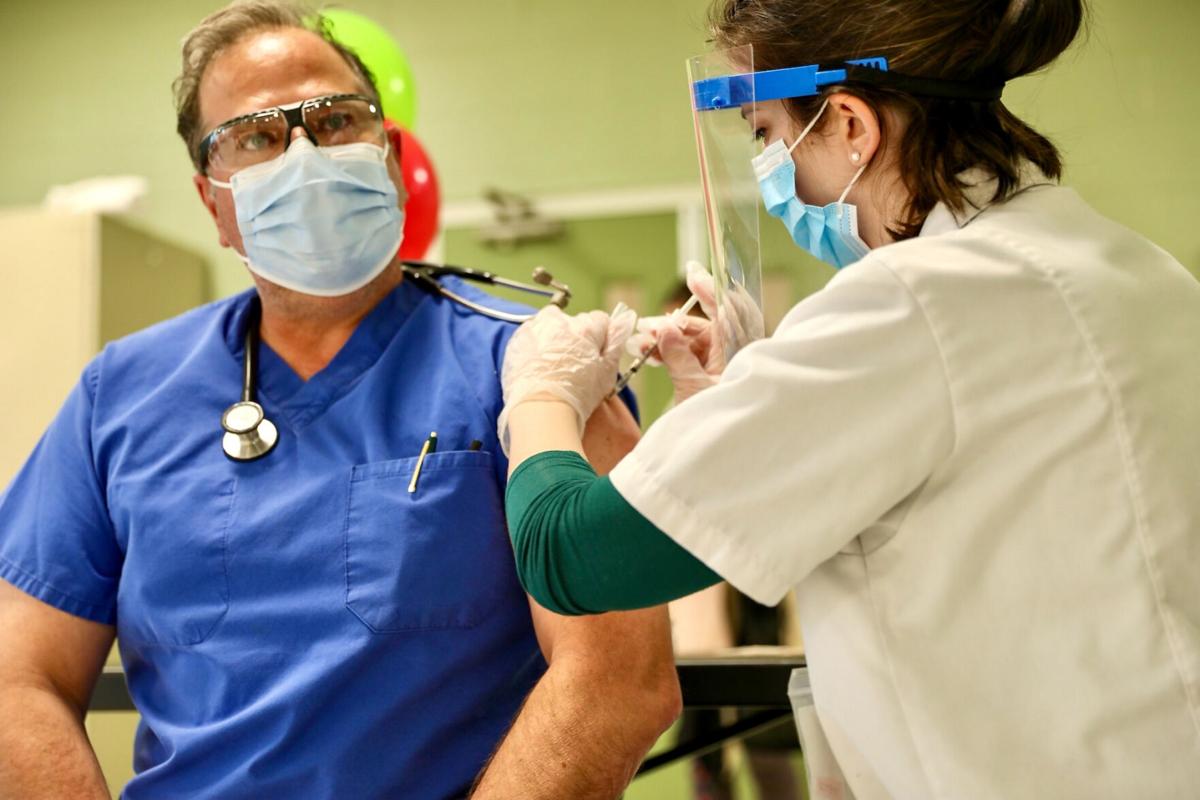 Gov. Andrew Cuomo, left, and Secretary to the Governor Melissa DeRosa during a COVID-19 briefing in the state Capitol in Albany on Dec. 18. Courtesy of Gov. Andrew Cuomo’s Office

Distributors will continue to first prioritize vaccines for the state’s 2.1 million health care workers on the coronavirus pandemic’s front lines, or in group 1A. Eligibility was expanded to New Yorkers in group 1B Monday, including about 1.4 million people aged 75 and older, 870,000 education workers, 207,000 police and firefighters, 100,000 public safety and 100,000 transit workers.

The addition of immunosuppressed New Yorkers and people 65 and older to the second group is an addition of 1.8 million people, or about 7.1 million combined 1A and 1B. The federal government continues to send about 300,000 dosages of Pfizer and Moderna’s approved COVID-19 vaccines to New York each week.

At the current rate, vaccinating the second group will take more than 23 weeks, or about six months.

“This is another major change in a very short period of time,” Cuomo said Tuesday morning on a conference call with reporters. “It seems change is constant with the CDC. To tell you the truth, I’m looking forward to the incoming administration to get a hold of this. This federal policy is making it extraordinarily difficult.”

The CDC did not define who or what conditions will be included for immunocompromised patients. Health experts classify immunosuppressed conditions differently, but they can include cancer patients and chronic diseases such as heart conditions, sickle cell anemia, asthma and diabetes, or pregnancy and smoking, among others.

“Immunocompromised is a category that can be defined a number of ways,” Cuomo said. “That has to be defined.”

The state first opened eligibility Monday with the ability to schedule an appointment to get a vaccine for New Yorkers ages 75 years and older, who have the highest COVID-19 mortality rate. Scheduling was immediately expanded Tuesday to New Yorkers over 65.

“There are hundreds of thousands of nurses and doctors who still haven’t been vaccinated,” Cuomo said. “So the policy and the intelligence of the federal system eludes me, but we will do the best we can.”

To check your eligibility and reserve an appointment to be vaccinated, visit am-i-eligible.covid19vaccine.health.ny.gov

Many people reported difficulty in using the site on its first day Monday, including freezing or other technical issues as the webpage was overwhelmed with visitors.

The federal government stockpiles second dosages of the vaccine under the assumption states would give away the second injections to other eligible Americans looking to get an initial shot, and then not have another to complete the first patients’ vaccinations against COVID-19.

“That debate goes on,” the governor said of the federal government holding second vaccine dosages. “They have not yet said what they’re doing, if anything, and we still only get 300,000 dosages per week.”

State Health Department Commissioner Dr. Howard Zucker and Secretary to the Governor Melissa DeRosa did not receive an update from federal officials about additional vaccine supply.

“They have not given us any additional information ... We have not heard what amount we’re going to get an increase on dosages,” DeRosa said, adding of the federal COVID-19 response last spring, “In a lot of ways, dealing with the federal government right now is like déjà vu. ...the information is not accurate or timely. They’re expecting people on the ground to make massive policy and operational changes on a dime. They’re feeling political pressure and, at the same time, little guidance or information to implement it.”

Zucker was on the phone with CDC officials Tuesday morning.

“I haven’t heard anything new,” he said.

Regardless of vaccine supply issues, the state will accept the federal guidance, the governor said.

“I don’t want New Yorkers to think we are not doing everything we can to not make them eligible for the vaccine,” Cuomo said. “I want to keep people in New York as calm as we can keep people in these anxious times.”

Cuomo expressed hope the federal government will ramp up vaccine supply after President-elect Joe Biden takes office Jan. 20. Increasing production is at the top of the new administration’s priority list, the governor said, with the potential approval of Oxford-AstraZeneca’s COVID-19 vaccine or Johnson & Johnson’s single-dose immunization.

Federal and state officials continue to debate if the additional dosages should be immediately released to states.

“Those are all decisions they have to make,” Cuomo said of federal officials.

“The entire distribution system is open, but at the end of the day, you only have 300,000 [weekly] dosages for a population of 7 million on the other side,” the governor said. “Patience. We need patience at an impatient time in history. This compounds the request for patience.”

Vaccinating high-risk hospital and medical workers first is a top priority to prevent doctors and nurses in contact with virus-positive people from spreading the disease to hundreds of other patients and overwhelming state hospitals.

“The staff is getting sick from COVID — that’s why continued prioritization for the hospital staff is key,” Cuomo said.

The state has 12 reported cases of the B117 variant of the novel coronavirus first discovered in the United Kingdom last month. The variant is allegedly 70% more transmissible.

Eighty B117 cases have been discovered in the nation to date. Three state cases of the variant were found in Saratoga County, with the first confirmed case tied to an outbreak at a jewelry store in Saratoga Springs last week.

“The UK strain is the X factor,” Cuomo said. “The federal government, the CDC, says the reason they’re moving up the population to 65+ is they’re afraid of the UK strain. ...So we have 12 in New York and we have 80 in the country, and that is what is panicking the federal officials, with good reason, because this is a much higher rate of infection.”

The statewide COVID-19 infection rate was 7.6% without hot spots Tuesday — about flat after fluctuations between 6.7% and near 8% for much of last week.

Hospitalizations increased 291 virus patients to 8,926 New Yorkers, but are tapering off after the end of the 37-day holiday season and heightened social gatherings, which started with Thanksgiving on Nov. 26.

About 0.07% of the Mohawk Valley’s and Finger Lakes’ populations are hospitalized with COVID-19. The state reported 0.05% hospitalized of the Capital Region’s population, with 0.04% hospitalized to date in the North Country.

The state reported 164 New Yorkers died from coronavirus complications Monday, slightly down, but also about flat from last week.

“May they rest in peace and may their families have peace,” the governor said.

The Finger Lakes, Capital Region and Long Island each have a seven-day average COVID infection rate of about 9%, with the state’s highest 9.5% in the Mohawk Valley.

Western New York and the North Country each have an average 7.6% positive, with an average 5.9% in New York City.

Signup for the COVID-19 vaccination, please.

Where you can get a vaccination