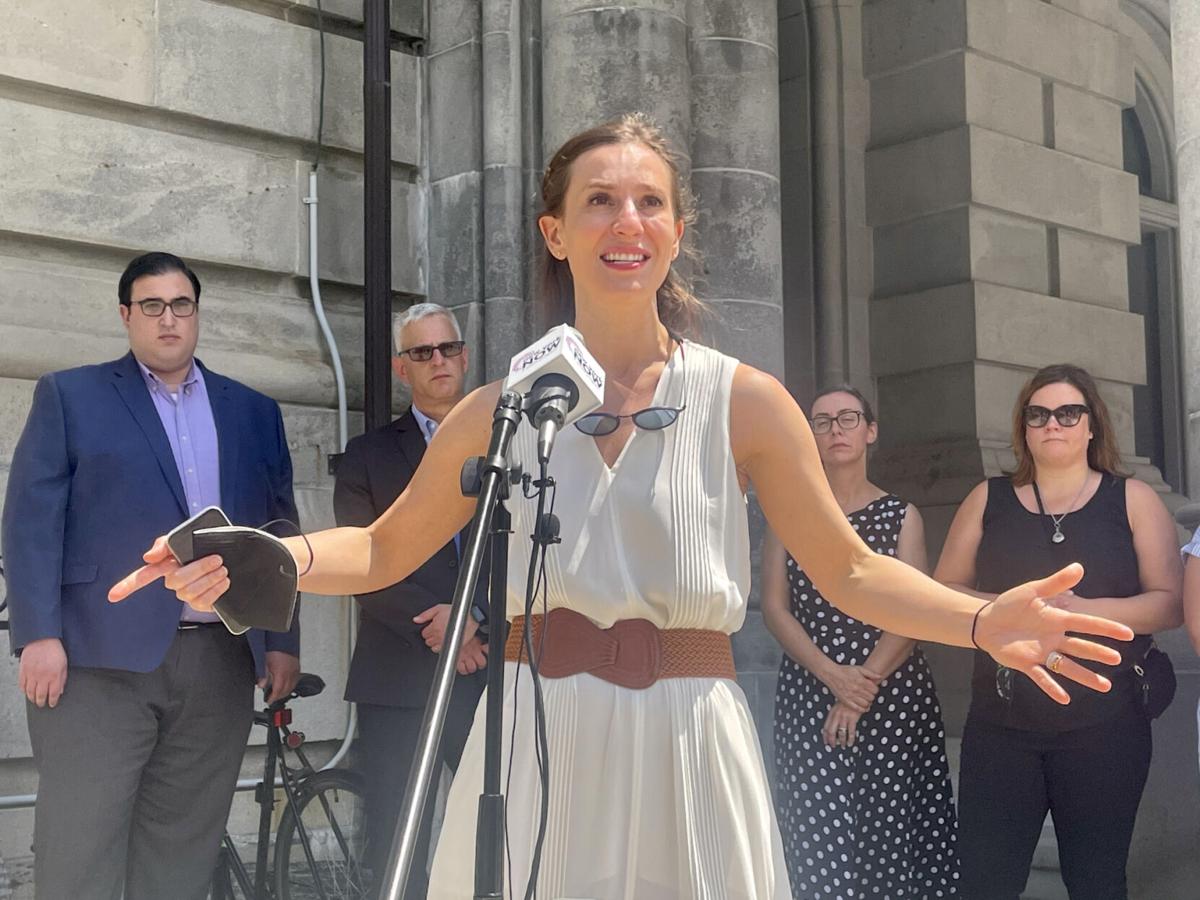 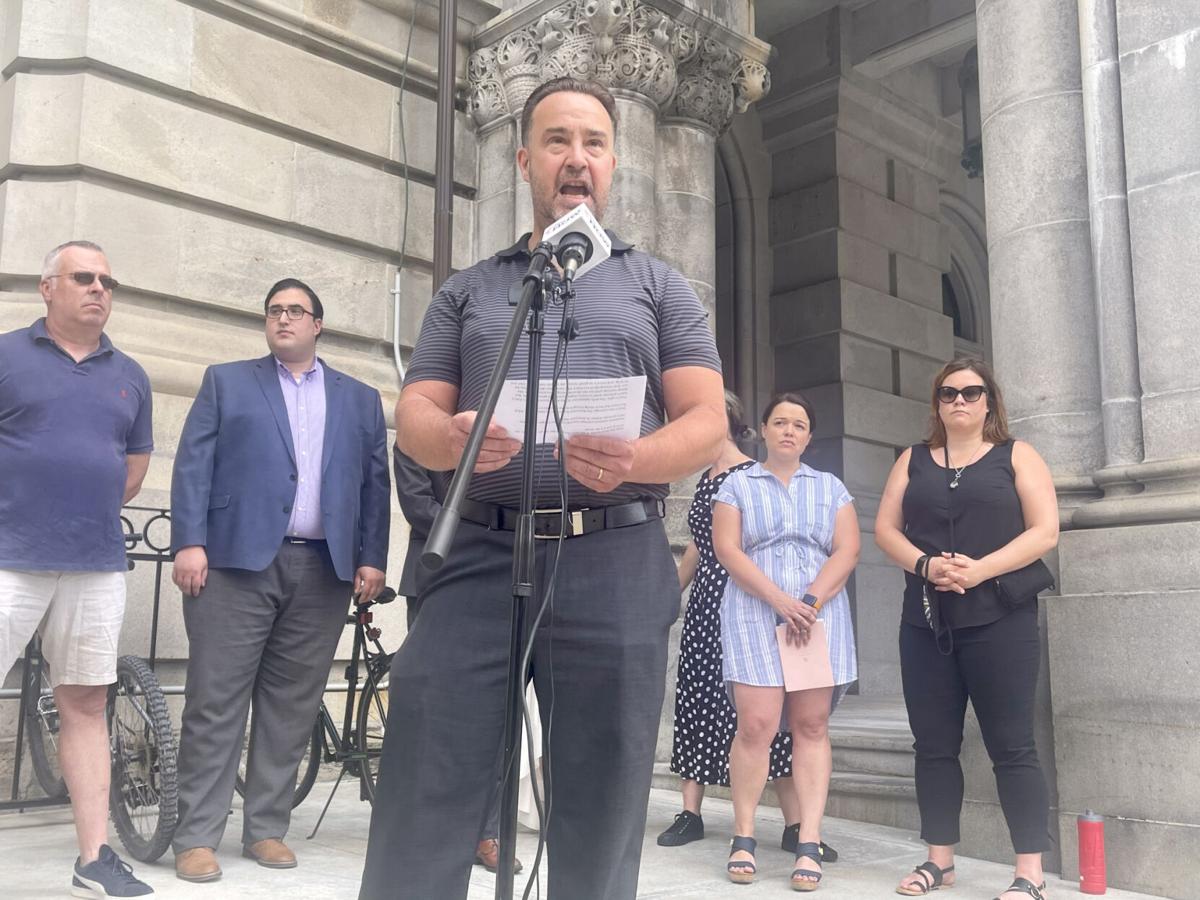 Jason Gough, a survivor of childhood sexual abuse, advocating in front of the state Capitol on Wednesday for the Assembly to pass the Adult Survivors Act before session ends this week. Kate Lisa/Johnson Newspaper Corp. 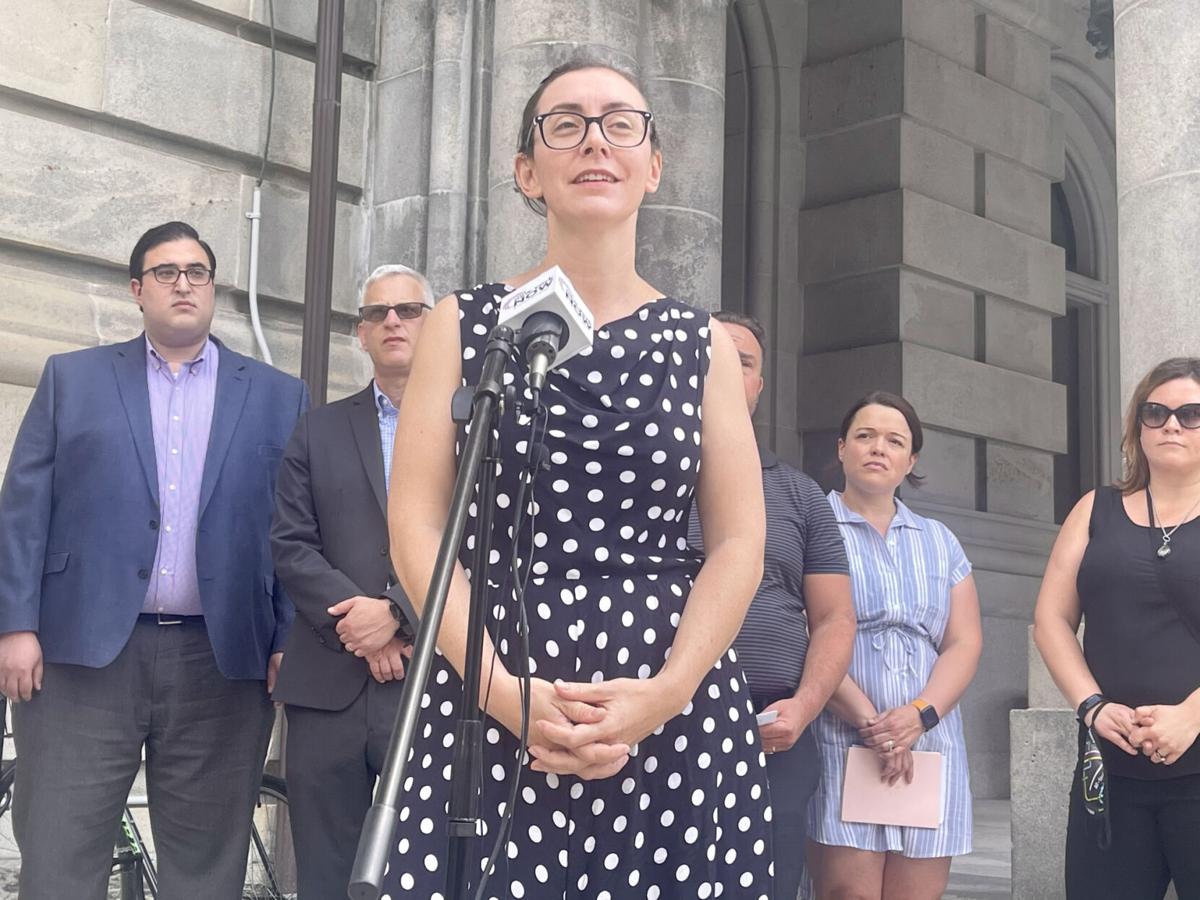 Jason Gough, a survivor of childhood sexual abuse, advocating in front of the state Capitol on Wednesday for the Assembly to pass the Adult Survivors Act before session ends this week. Kate Lisa/Johnson Newspaper Corp.

ALBANY — Unanimous votes for a bill in one house of the state Legislature typically means seamless passage in the other. That hasn’t been the case for the Adult Survivors Act.

The Adult Survivors Act, S.66/A.648, would give New Yorkers who suffered sexual abuse over the age of 18 one year to file civil lawsuits for past trauma and hold abusers accountable, even if statutes of limitations on those legal claims have expired.

Senators unanimously June 3 voted 62-0 to pass the measure, sponsored by Sen. Brad Hoylman and Assemblywoman Linda B. Rosenthal, both D-Manhattan.

The bill remains stalled in the Assembly’s Judiciary Committee, where it has lived since Jan. 6.

Representatives of Democrats in the Assembly majority did not respond to multiple requests for comment Wednesday about their stance on the Adult Survivors Act or why it hasn’t moved this session.

“The official line we’ve heard is they are looking at the bill, they are studying the bill or they are talking to their conference about the bill,” said Michael Polenberg, vice president of government affairs at Safe Horizon, a nonprofit victim services agency. “We think that with so many assemblymembers having already signed on and with a 62-to-nothing vote in the Senate, I don’t know what else they need to know or learn about the bill. I think they just need to bring it to the floor.”

Polenberg was one of several advocates and survivors of sexual abuse or trauma to rally in front of the Capitol on Wednesday to push for Assembly leaders to pass the Adult Survivors Act before Thursday’s scheduled end of legislative session.

Democrats control both chambers with a veto-proof supermajority.

Adult survivors of sexual abuse can include people assaulted or abused by medical providers, formerly incarcerated people or models in the fashion industry, athletes abused by coaches or teammates and others.

Marissa Hoechstetter is one of dozens of survivors who endured medical sexual abuse by a downstate gynecologist.

“[Assembly Speaker] Carl Heastie and the leadership need to get their shit together to say to survivors that they hear us, that they support us,” Hoechstetter said. “This is serious, and this is a widely supported piece of legislation that unanimously passed the Senate, has wide sponsorship and no opposition in the Assembly.

The Adult Survivors Act is modeled after the Child Victims Act. Signed into law Jan. 28, 2019, the CVA gave child sexual abuse survivors a vehicle to file civil lawsuits against their abusers for incidents that happened before age 18.

Some survivors of childhood sexual abuse have struggled to secure an attorney to take their case, especially if a victim’s abuser lacks financial wealth or other assets, or was not abused by an institution.

Sen. Alessandra Biaggi, D-Bronx; on Wednesday said she is optimistic lawmakers will do the right thing and pass the Adult Survivors Act on the last day of session.

“We’re giving the survivors of trauma the ability to bring a case forward if they so choose,” Biaggi said. “I understand not everybody who will want to use this bill will be able to use this bill. That means we have to do even more.

“It means we have identified an area we can improve on, but we don’t stop the work simply because there’s another gap to fill,” she added. “This isn’t just the right thing to do — it’s the moral thing to do.”

Last week, Gary Greenberg, a survivor of childhood sexual abuse who was a leading advocate to pass the Child Victims Act, encouraged Assembly leaders to reject the Senate-passed bill, citing the legal challenges some victims have experienced.

Greenberg, of New Baltimore, in Greene County, has communicated with Assembly leaders and said he expects Speaker Carl Heastie, D-Bronx, and Judiciary Committee Chairman Charles Lavine, D–Glen Cove; to examine and amend the Child Victims Act and Adult Survivors Act to give every victim the chance for justice.

Survivors on Wednesday argued legal hurdles challenging a handful of survivors should not prevent action that will bring thousands justice.

A person in the United States is sexually assaulted or abused every 68 seconds, Biaggi said.

“That is a staggering statistic, and it means we have to work faster and more quickly and not delay progress in the very places that people put us in to make sure that progress is done,” Biaggi said. “Then when we finish this we have to go on to the next thing.”

Shame, religious beliefs, family relationships, fear of loss of employment or immigration status can make it difficult for a person to process or litigate trauma within the state’s time-barred civil lawsuits based on sex crimes.

“This whole bill is about one thing: Freedom,” said Tom Andriola, a survivor of childhood sexual abuse who lives in Guilderland. “Whether or not a survivor chooses to go to the courts, they have the freedom to do so. So if you stand on the floor of the Assembly and you purport to yourselves and to your constituents that you are here for freedom, you have to bring this out. You have to vote ‘yes.’”

More than 6,000 cases have been filed under the Child Victims Act since August 2019.

The deadline to file cases under the Child Victims Act is Aug. 14.