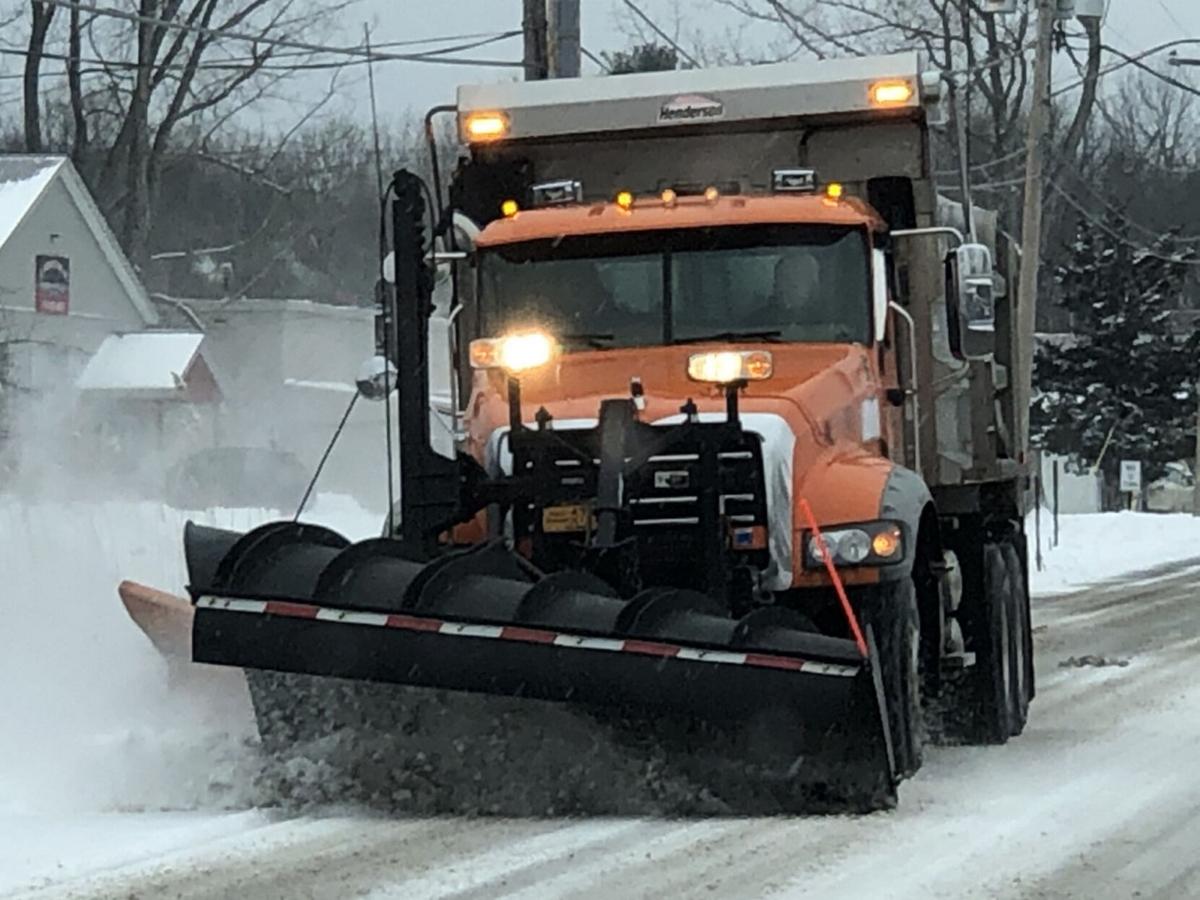 A plow makes its way through Greenport on Monday as the snow begins to accumulate. Bill Williams/Columbia-Greene Media 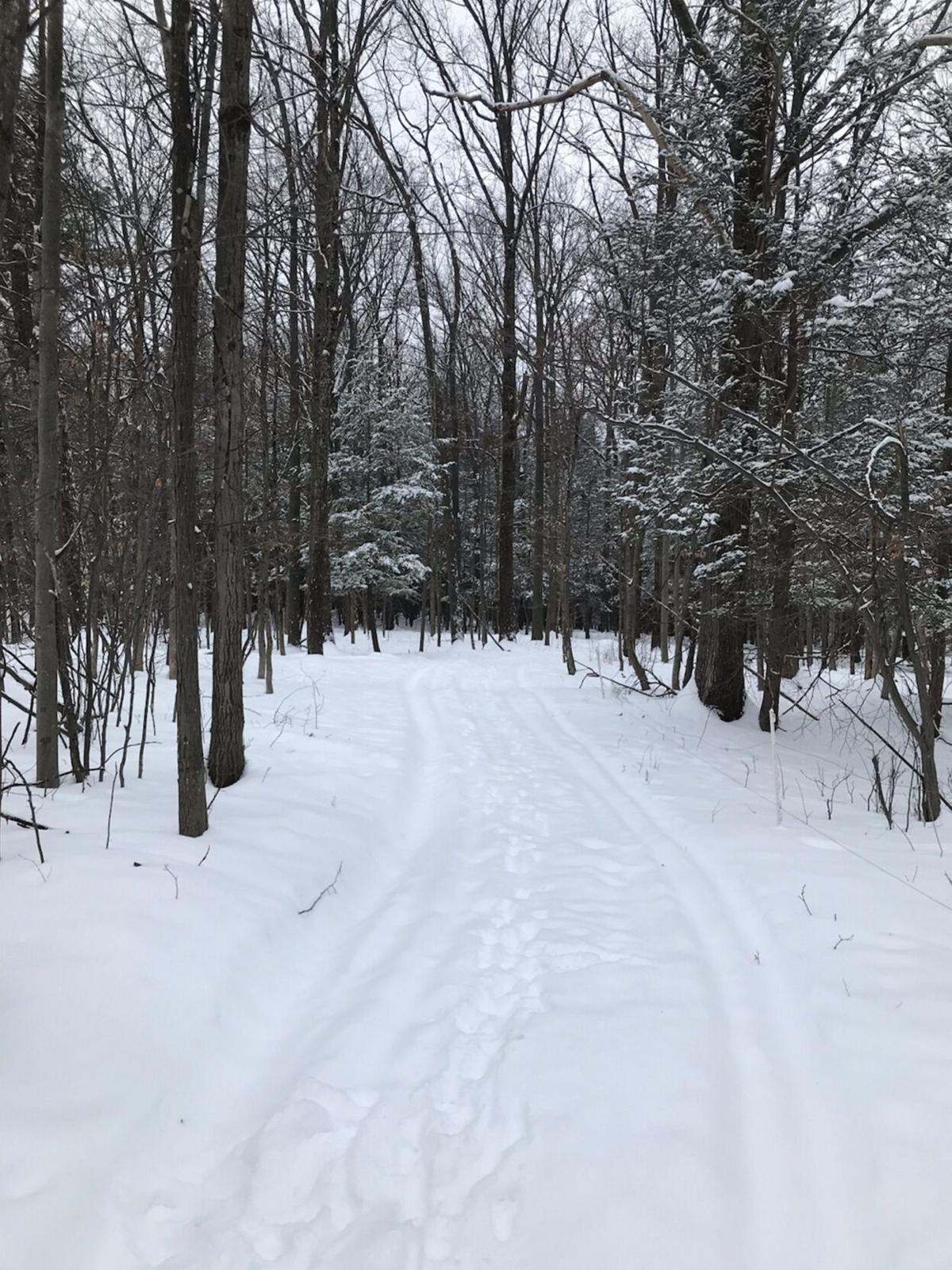 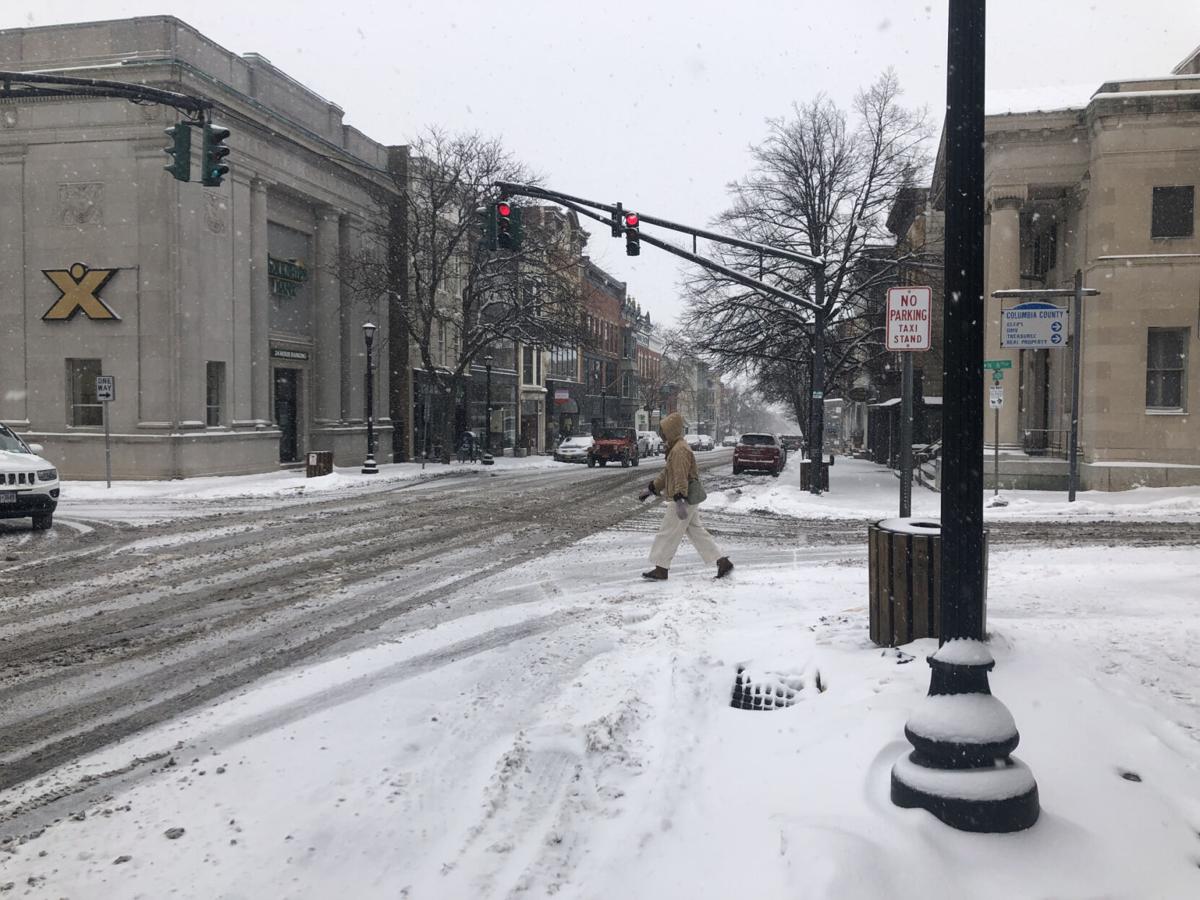 The start of this week’s snowstorm on Warren Street, Hudson. Aliya Schneider/Columbia-Greene Media

A plow makes its way through Greenport on Monday as the snow begins to accumulate. Bill Williams/Columbia-Greene Media

The start of this week’s snowstorm on Warren Street, Hudson. Aliya Schneider/Columbia-Greene Media

Residents in the Twin Counties are buckling down for the second major snowstorm of the season.

Columbia and Greene counties can expect 8-12 inches of snow from this storm, Brian Montgomery, meteorologist at the National Weather Service in Albany, said Monday.

Areas north of the Twin Counties will get less snow. Areas south will have more, Montgomery said. One to three inches fell across the area early Monday morning.

As the coastal storm intensified Monday afternoon, another 7-9 inches was expected to fall, Montgomery said.

The snow is expected to taper-off Tuesday morning.

Blowing and drifting snow will be a factor with this storm, as winds overnight Monday into Tuesday are expected to gust from 20 to 30 mph.

The snow will powdery, so areas that experience drifting will make roads slippery again after the storm is over, Montgomery said. The winter storm warning is scheduled to expire late Tuesday.

Gov. Andrew Cuomo held a press briefing in his Manhattan office at noon Monday to provide an update about statewide preparations for the impending storm. Cuomo called the weather conditions “dangerous.”

“I just drove down from Albany and I can tell you firsthand it is seriously dangerous out there,” Cuomo said. “There is no reason to be out on the roads and it’s only going to get worse.”

The governor and multiple state transportation officials urged New Yorkers excluding essential workers to stay home or off the roads for safety of drivers and road workers.

Snow could accumulate up to 2 inches per hour over the course of the winter storm, which is expected to continue through Tuesday.

“...A lot of people are getting stuck already,” the governor warned. “This is going to be a significant issue for us on a number of levels.”

Response and cleanup will be more difficult for officials because the storm will impact most of the state.

“It’s a nor’easter that’s been coming up the shores — it makes it more difficult for us statewide,” Cuomo said, adding equipment and efforts are usually focused to the region that needs it most.

The governor declared a state of emergency in 44 of New York’s 62 counties Monday.

“ ...This is a lot of snow and the duration of the storm is a problem,” Cuomo said. “This is not a band that’s going to last a few hours. We’re looking at a long two days here.

“This is a serious situation — it’s nothing to be trifled with,” he added. “Yes, we’ve had snowstorms before, but this is a dangerous, life-threatening situation.”

The New York Department of Transportation has all available manpower in service to cover Greene County during the latest winter storm, said Bryan Viggiani, public information officer for Region 1.

Crews began working early Monday morning and will be on 12-hour shifts until the storm is over, Viggiani said. The state Department of Transportation has 16 plow trucks that cover all state routes in Greene County and operate out of Cairo, Coxsackie and Tannersville. The garage on Route 23 in Cairo has 3,000 tons of salt that will be used during this storm and through the winter, Viggiani said.

The Greene County Highway Department is responsible for maintaining 262 miles of roads, Highway Superintendent Scott Templeton said Monday. The county has four locations in Athens, Ashland, Hunter and Freehold, where salt is stored, he said.

Unlike the state Department of Transportation, the county does not brine roads, he said.

“We’d like to,” Templeton said. “Unfortunately, we do not have the equipment to brine our roads. [The state DOT’s] resources for salt are far more extensive than the county.”

“Residents who usually park on Main Street should utilize the village’s municipal parking lots at Willard Alley and Wilson Court,” according to the announcement from the Catskill Police Department. “Residents should not use any parking lot that is privately owned or parking lots owned by Greene County as their vehicles will be towed at the owner’s expense.”

Residents who violate the snow emergency parking regulations will be ticketed and towed, according to the Catskill Police Department.

“All our trucks are out right now plowing,” Catskill Department of Public Works Superintendent Robert Young said Monday morning. “After the snow is done, we’ll be starting snow removal on Main Street.”

The village has five plows out on the roads, Young said, and is well-stocked with salt.

Young encouraged residents to stay in during the storm.

“If they can stay home, please stay home unless it’s an emergency,” he said. “If they have access to driveways, use the driveways instead of parking on the street. It makes it easier for plows to get through.”

The village of Athens also declared a snow emergency, which will remain in effect for 48 hours.

On even days, residents should park on the even side of the street for 24 hours, beginning at 8 a.m. and ending at 8 a.m. the following day and vice versa for odd days.

The other five districts — Coxsackie-Athens, Greenville, Cairo-Durham, Hunter-Tannersville and Windham-Ashland-Jewett — were closed.

“The decision to switch to a remote learning day today, as opposed to a traditional snow day, was based on the fact that our students have experienced a tremendous amount of learning loss as a result of the pandemic,” Catskill Superintendent Ronel Cook said. “Unfortunately, the pandemic has disrupted the continuity of learning throughout the district. As a result, all Catskill Central schools were switched to the remote learning platform last Friday to stop the internal spread of infection, provide continuous instruction via remote learning and reduce the impact of learning loss. Other districts in the area are better situated as they can reopen after the storm has concluded. We can not reopen due to the excessive amount of staff on quarantine orders.”

The district will make a determination this evening about whether there will be classes tomorrow, Cook said.

Columbia County ran checks to make sure snow equipment is in working order.

“You make sure your equipment is in working order and you have the supplies you need,” said Board of Supervisors chairman Matt Murell. “Our director of highways makes sure our trucks are in running order, plow blades are in good shape, we make sure we have enough sand and salt, and they develop a schedule that determines when the employees will go out and plow sand and salt.”

County officials know when a storm is coming from National Weather Service and other weather sites and they can prepare accordingly, Murell said Monday.

“Basically they are weather forecasts,” Murell noted. “But if they are projecting things like high winds or heavy wet snow, they will give us advisories in advance if there could be outages.”

New York State Electric & Gas (NYSEG) said the company is preparing for the potential of significant snowfall that could impact portions of the company’s service area through Tuesday.

Storm readiness teams have been monitoring weather forecasts, planning, readying crews and equipment, coordinating with municipal officials, mobilizing employees for storm duty and have additional contract tree and line crews ready to help restore service should outages occur, according to a statement from NYSEG.

The company is urging customers to monitor local forecasts and prepare for the possibility of service interruptions.

Central Hudson Gas & Electric Corp. began preparing crews of tree and line workers prior to the expected winter storm. A statement from the company indicated the storm has the potential to bring periods of heavy snow and wind gusts of up to 30 mph starting Sunday evening and continuing into Tuesday morning.

“We know how important electrical service is for our customers, especially during these colder winter months,” said Ryan Hawthorne, vice president of Electric Engineering and Operations at Central Hudson. “There remains a lot of uncertainty in the forecast models, but our crews as well as our core contractor workforce are to respond if outages occur.”

The American Red Cross is encouraging dealing with potential power outages caused by the storm in a safe way.

“With the threat of snow and cold temperatures, it’s important to be vigilant when it comes to personal safety and staying warm,” said Kevin Coffey, regional CEO, American Red Cross Eastern New York Region. “Fires linked to home heating are some of the leading causes of home fire deaths.”

The Red Cross is urging people to listen to the weather forecast for important information, avoid driving in harsh conditions, wearing layers when outdoors and staying inside when possible. If you do lose power, the Red Cross suggests using flashlights instead of candles because they are safer and pose less of a potential fire hazard.

The City of Hudson Department of Public Works has all eight of their plow trucks pressed into service for the latest storm, Superintendent Robert Perry said. Crews worked Monday into the evening and began again Tuesday morning clearing city streets. Regular alternate-side parking remains in effect through the storm, Perry said.

Once the storm ends, snow removal will take place, if needed, Perry said.