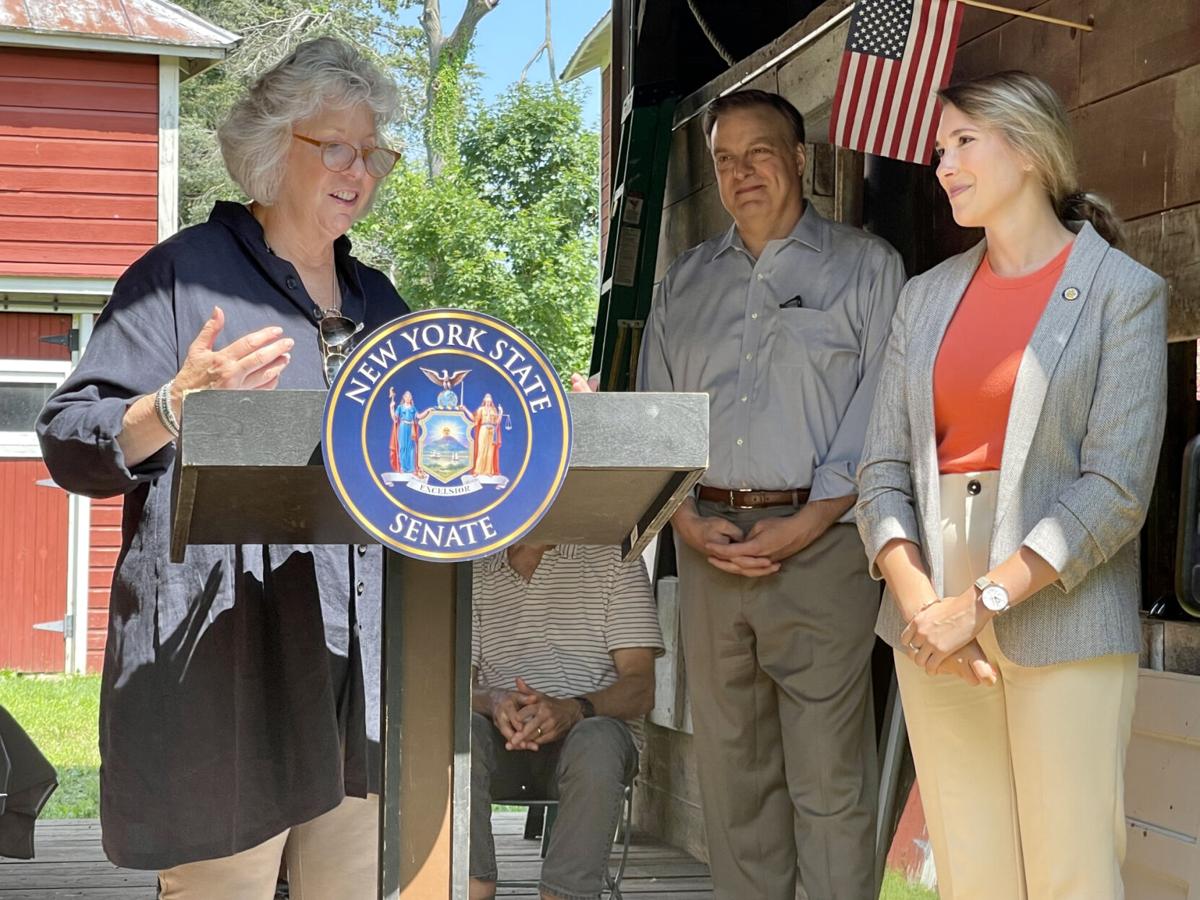 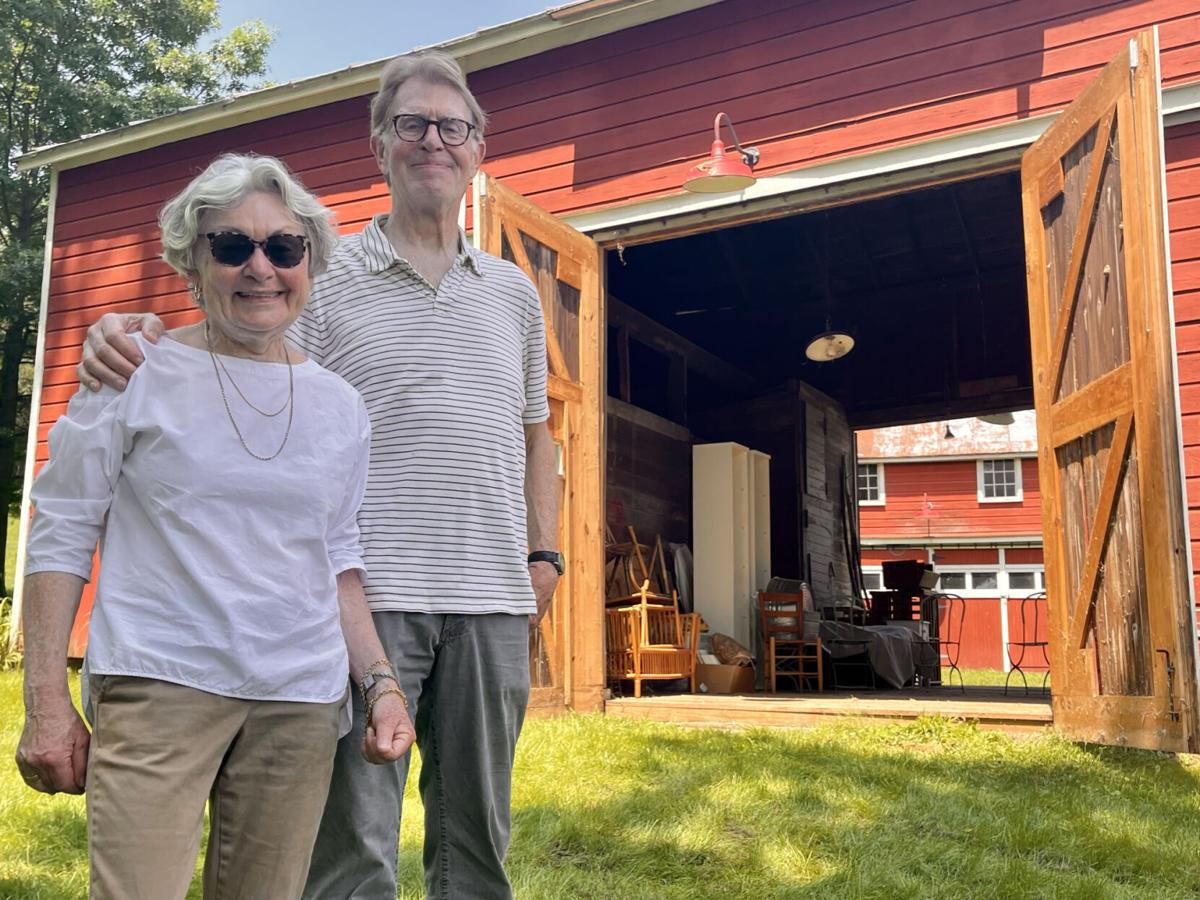 Vern Bergelin and Mary Ellen Ross own the property at 920 County Route 10, Livingston, and are excited about a potential new 25% state tax credit available to homeowners who need assistance to revitalize a historic barn built before 1945. Their barn, pictured behind them, was constructed in the 1840s. Kate Lisa/Johnson Newspaper Corp. 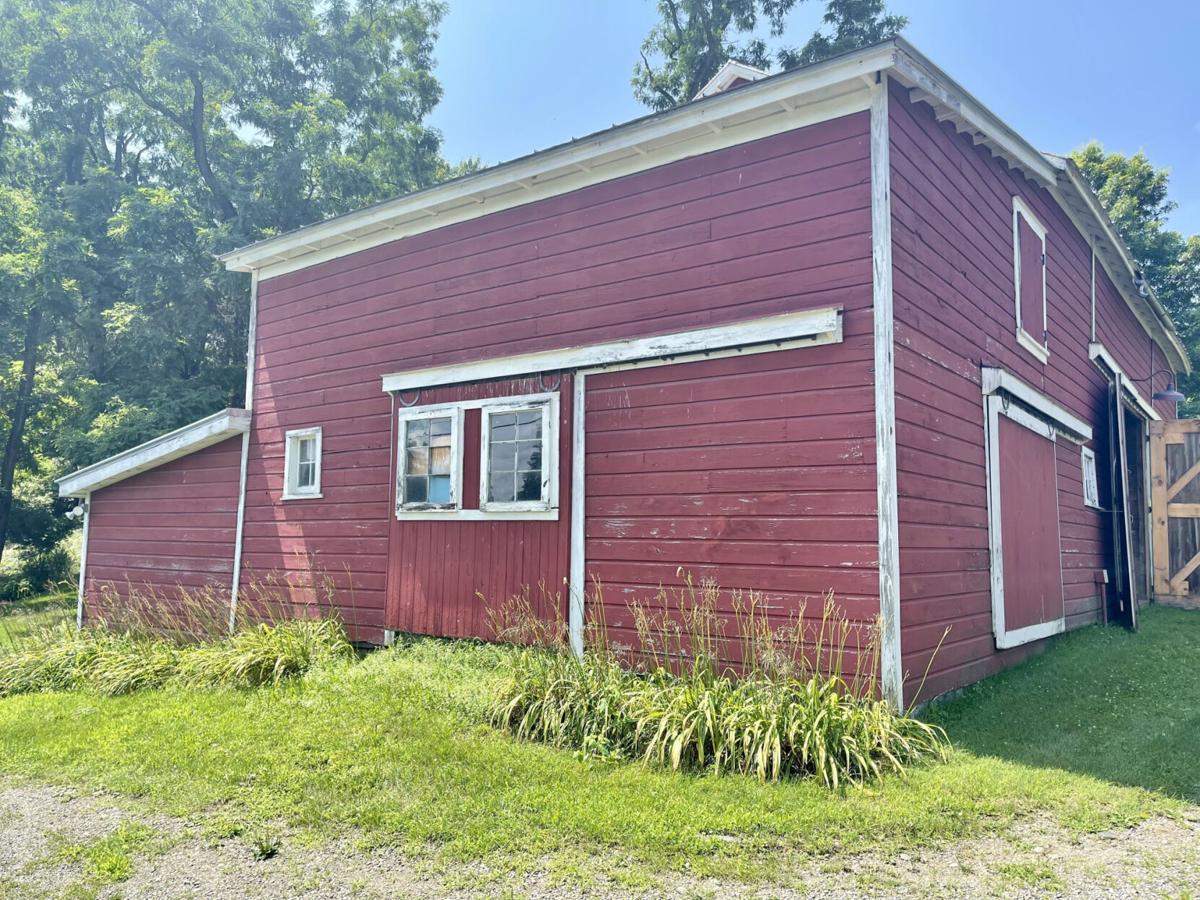 A mid-19th Century barn at 920 County Route 10, Livingston, could use window upgrades and other repairs to rehabilitate the historic structure. A bill that unanimously passed both houses of state Legislature last month would create a 25% tax credit to help restore New York barns built before 1945. Kate Lisa/Johnson Newspaper Corp. 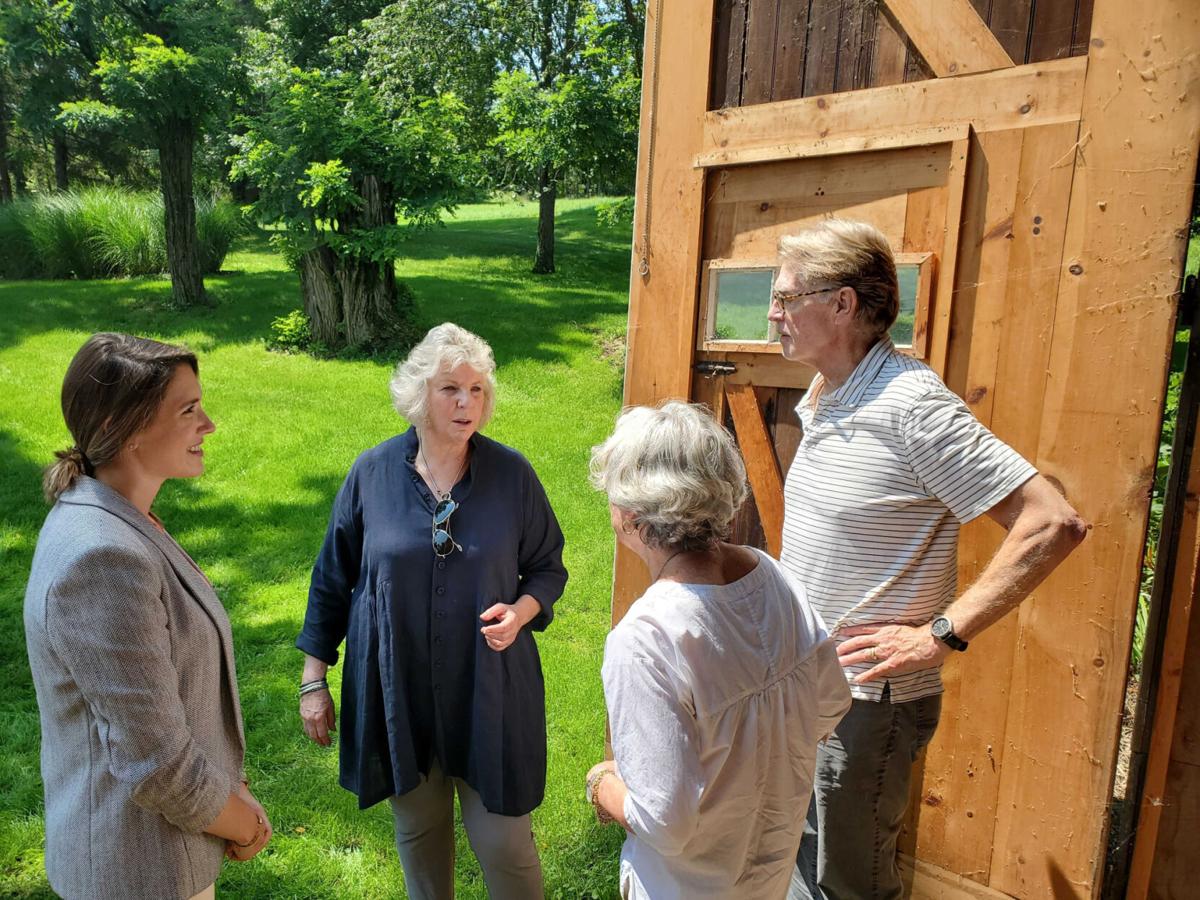 Vern Bergelin and Mary Ellen Ross own the property at 920 County Route 10, Livingston, and are excited about a potential new 25% state tax credit available to homeowners who need assistance to revitalize a historic barn built before 1945. Their barn, pictured behind them, was constructed in the 1840s. Kate Lisa/Johnson Newspaper Corp.

A mid-19th Century barn at 920 County Route 10, Livingston, could use window upgrades and other repairs to rehabilitate the historic structure. A bill that unanimously passed both houses of state Legislature last month would create a 25% tax credit to help restore New York barns built before 1945. Kate Lisa/Johnson Newspaper Corp.

A bill sponsored by Assemblymember Didi Barrett, D-Hudson, and Sen. Michelle Hinchey, D-Saugerties, would create a 25% tax credit for New Yorkers to revitalize historic barns in the state constructed before 1945.

The bill unanimously passed both houses of the Legislature last month a few days before session concluded June 10. It had not been delivered to the governor’s desk as of press time Thursday.

“So many of these barns are falling into disarray because of the sheer cost to rehabilitate them or preserve them,” Hinchey said in front of a historic barn in Livingston on Thursday. “The sooner [the bill is signed], the sooner the barns are saved.”

Cost varies depending on space, details and the number of windows a barn has, but converting or restoring a barn is estimated to cost between $200 and $300 per square foot, according to Colonial Barn Restoration Inc.

If signed into law, property owners will be eligible to apply with the State Historic Preservation Office for the credit to assist property owners preserve thousands of barns in rural communities and across upstate, to restore them to productive use or into craft breweries, art studios, event space or other small businesses to foster economic development as the state recovers from the COVID-19 pandemic.

Vern Bergelin and Mary Ellen Ross have owned the property at 920 County Route 10, Livingston, for two decades. The large barn on the property dates back to the 1840s when the Livingston family operated a dairy farm.

Bergelin and Ross stabilized the structure in the last 20 years, but would apply for the new tax credit to fix the building’s windows and other cosmetic work.

“We want to preserve it permanently,” Bergelin said, adding the tax credit is better than a grant program, which would have more regulations on how the money could be spent on the project.”

The couple hopes to convert the barn into a guest house or art studio.

“We could fulfill our responsibility to the history of Columbia County,” Ross said.

“A happy landmark is a busy landmark,” Bergelin added.

Lawmakers and historic preservation experts Thursday urged the governor to sign the bill into law, which would apply to taxable years starting and after Jan. 1, 2022.

“It hasn’t been delivered as of yet and remains under review,” Rich Azzopardi, senior adviser to Gov. Andrew Cuomo, said in a statement Thursday.

Representatives of the Executive Chamber would not answer why the governor has yet to sign the measure.

“New Yorkers are proud of their barns and we all know that,” state Preservation League President Jay DiLorenzo said Thursday. “We see it on the landscape how much they add to the setting, and they evoke strong feelings of tradition of home. They’re just as much of a landmark as the local theater and local church.”

“Many barns in New York state are still in agricultural use, but there are quite a few that are not,” DiLorenzo said. “They’re vacant, they’re not used whether due to neglect or lack of resources, they may be lost forever to us. That’s something we really want to avoid.”

The federal Historic Barn Rehabilitation Tax Credit was eliminated in 2018 as a result of changes in the federal tax code under the Federal Tax Cuts and Job Act of 2017. About 50 state barns were successfully restored under the federal tax credit first established in 1996.

Michael Tomlan, a professor at Cornell University and president of the state Barn Coalition, said Thursday the assistance will help preserve thousands of eligible barns across the state. Eighty barn owners in just one of New York’s 62 counties applied for state grants to revitalize historic barns in 2005.

“I say to the governor: Get with it,” Tomlan said about signing the bill into law.

Hinchey and Barrett’s bill revives the tax incentive by placing it under the state Tax Law and expands eligibility so more historic barns may qualify for the assistance.

Barrett stressed rehabilitating the state’s barns, or repurposing them to be used in the 21st Century, will help preserve New York and upstate’s history.

“The barns here are beloved symbols of America’s rural roots,” Barrett said. “Barns bring communities together in our country, our love of the land... and the evolving relationships as humans. The repurposing of barns is another dimension of this continuing relationship.”