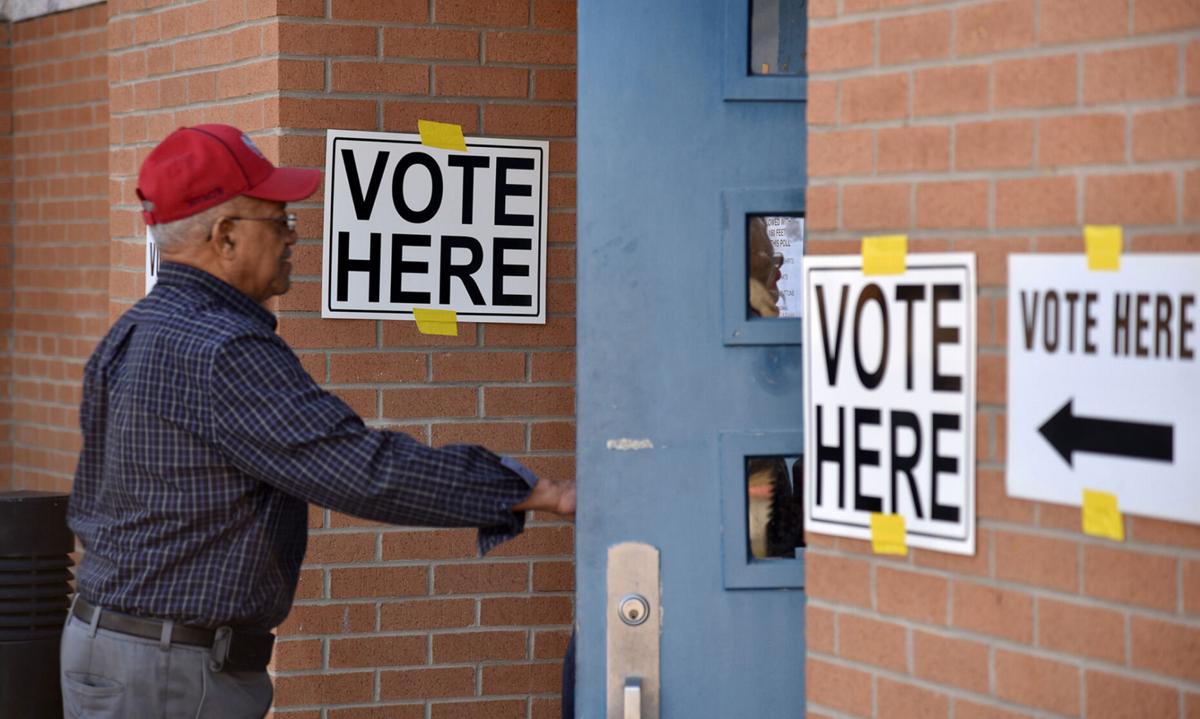 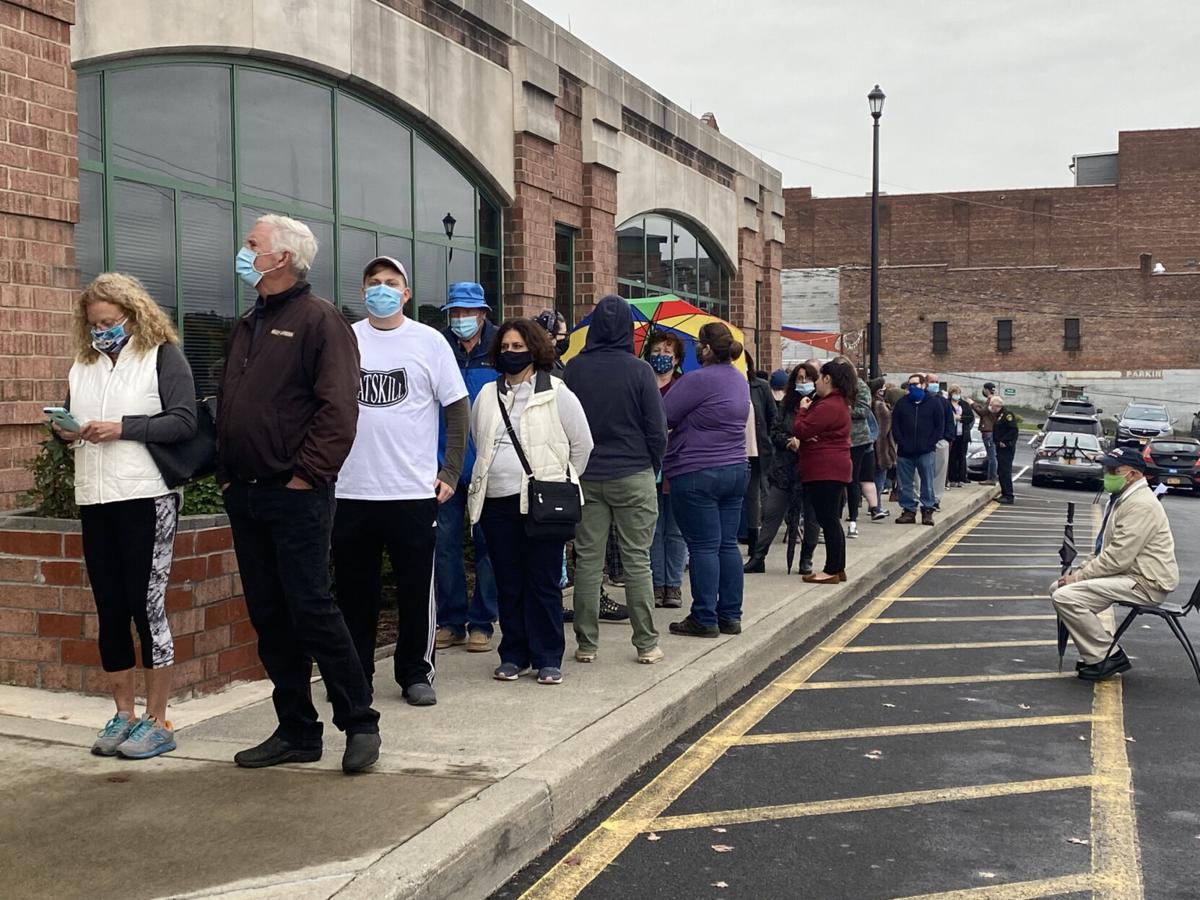 Voters wait in line to cast their ballots early in Greene County on Oct. 26, 2020. File photo

Voters wait in line to cast their ballots early in Greene County on Oct. 26, 2020. File photo

ALBANY — A series of bills became law as the weekend began to make casting a ballot in state or local elections easier and more accessible for all New Yorkers.

Gov. Andrew Cuomo late Friday signed a package of legislation passed in the Senate and Assembly at the end of session to allow residents to electronically request an absentee ballot and apply for a ballot without a signature, permit absentee ballots to be accepted if postmarked by Election Day and to require boards of elections to post changes to polling place locations, among others.

“During the past 16 months, numerous obstacles thrown up by the COVID-19 pandemic imperiled one of our most basic and vital rights — the right to vote,” Cuomo said in a prepared statement after signing the voting legislation. “This sweeping, comprehensive package of legislation will make it easier for voters, candidates and boards of elections to perform their critical functions and keep our democracy running. Elections have enormous consequences for New Yorkers across the state, and these reforms will bolster their ability to use their voices at the ballot box.”

Other legislation was signed into law requiring boards of elections deliver absentee ballots to voters residing in nursing homes, residential care facilities and other facilities under the state Office of Mental Health, and allowing New Yorkers requesting an absentee ballot by mail until 15 days before the day of the election. In-person absentee applications can be received until the day before the contest.

Candidates who have lost a primary election can also now decline a nomination.

“Up to now, candidates who lost a major primary literally had to die or move out of state in order to get off a minor party line on the ballot,” said bill sponsor Sen. Rachel May, D-Syracuse, in a statement. “This led to confusion and to workarounds that were bad for democracy. Voters should be able to trust that the names on a ballot represent active candidates for election. I want to thank the governor for signing this important reform to our election laws.”

State Board of Elections spokesman John Conklin did not respond to multiple requests for comment Monday about the new voting laws and how the state agency is preparing to meet the requirements ahead of Election Day on Nov. 8.

The governor also signed measures into law that will conform state mailing deadlines for absentee ballots in line with the U.S. Postal Service for the timely delivery of mail and increase the number of permitted election district enrollment from 1,150 to 2,000 registrants.

The previous limit was set based on the limitations of old lever voting machines, which could only handle 1,000 votes per election. Optical scanners can read and hold up to approximately 4,000 ballots per election, according to the governor’s office.

Republican lawmakers largely voted against the new voting rules this spring after concerns of accurate voting counts in the 2020 presidential election.

“We have an obsession in this state with tinkering with our election law,” state Republican Committee Chair Nick Langworthy said recently outside the state Capitol in Albany. “I think we have pretty honest elections in New York of bipartisanship ensured within our boards of elections. ...I do think that we should really take our time with all of these changes and make sure we’re investing in the interest of fair elections and taxpayers before we start tinkering it to meet what some liberal group tells you you need to have.”

States with one-party rule or control in overseeing boards of elections and ballot counts gave some voters across the country concern about expanding early and absentee ballot access, Langworthy said.

“In reality, I think there’s a disparity between big counties and small counties on this,” Langworthy said. “The one-size-fits-all approach makes it difficult.”

More populous urban areas, like in Erie County, which includes the city of Buffalo and the surrounding towns and villages, has more than 35 early voting sites. Smaller counties under a certain population may be challenged to meet minimum early voting site requirements, Langworthy said.

“I think it’s created a burden for small counties to meet,” he added. “I think you should get it right before you start making changes. We have election professionals in the state who have an intense amount of pressure with all the changes in the last several years.”

Lawmakers passed other voting reforms before the end of session that the governor has not signed into law — especially bills that would mandate expansion of early voting access statewide.

Gov. Cuomo signed a series of mandates on voter law in January 2019, including the creation of early voting in the state, or allowing New Yorkers to cast their ballots before Election Day. The state requires each county board of elections to have at least one early voting site available for voters.

2020 marked the first year when any New York voter was able to request an absentee ballot because. Absentee ballots were previously only granted to a voter at their request if they meet certain criteria, such as physically being out of the county, or a medical reason prohibiting them from being able to access their assigned polling site on election day.