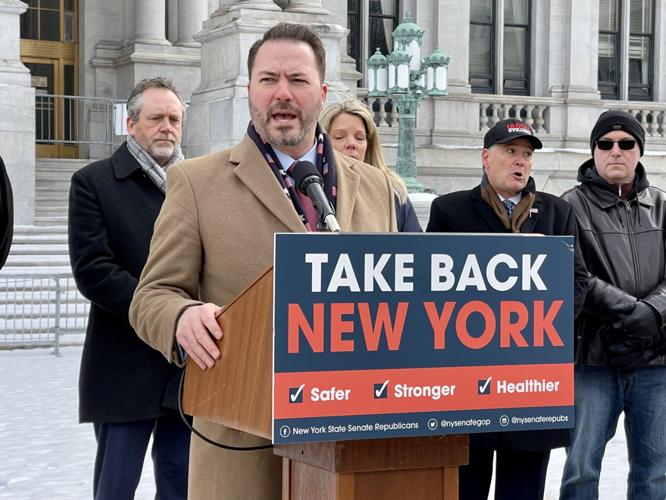 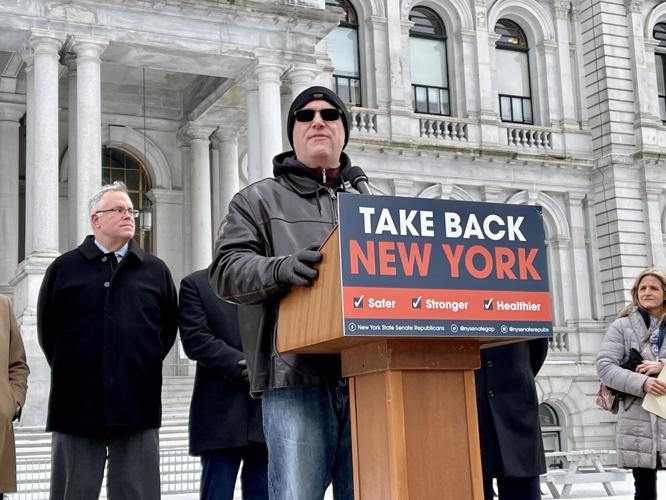 Kate Lisa/Johnson Newspaper Corp. Michael Dowling, a nurse who was suspended from his health care job in the state after refusing to get the COVID-19 vaccine and comply with New York’s mandate for health workers, speaks out against the order and future mandates in front of the state Capitol on Wednesday.

Kate Lisa/Johnson Newspaper Corp. Michael Dowling, a nurse who was suspended from his health care job in the state after refusing to get the COVID-19 vaccine and comply with New York’s mandate for health workers, speaks out against the order and future mandates in front of the state Capitol on Wednesday.

Senators in the Health and Finance committees discussed the official appointment of Bassett, whom Gov. Kathy Hochul tapped to become the state’s 17th health commissioner after forcing Commissioner Dr. Howard Zucker to leave his post in December.

Lawmakers questioned Bassett on a series of questions about her intended approach to New York health care at its helm.

Republicans largely pressed the nominee about her position on allowing the Executive Chamber to dictate public health policy, similar to how Zucker, who became embroiled in scandal over published COVID-19 data, under former Gov. Andrew Cuomo’s administration.

Sen. Patrick Gallivan, R-Elma, was first to ask Bassett how she will operate in the position and evade executive influences when issuing health guidelines.

“I receive clear assurances from the governor that she wants to see the Health Department have the stature that it’s had in the past — of a nationally interrecognized center of public health expertise,” Bassett said.

Bassett, 66, touted her past service in public health for 35 years. She served as the commissioner of New York City’s Health Department and Mental Hygiene from 2014 through summer 2018 and oversaw the department’s response to Ebola, Legionnaire’s disease and other outbreaks.

“I absolutely know what you said was true, not only in this state, but all over, including with our federal government and the Centers for Disease and Control,” Bassett said of Zucker’s past behavior. “This has cost us dearly, and I’m confident you won’t see it repeated.”

Health officials expressed their confidence Wednesday that Bassett will lead the department based on scientific facts, not politics.

“Dr. Bassett has made it clear that her recommendations will always be based on science and data, and improving the health of all New Yorkers,” Health Department spokeswoman Jill Montag said. “She made this point when interviewing for the job with Gov. Hochul, and she is grateful that the governor has relied on science and the expertise of the Department of Health in creating COVID-19 policies that have helped turn the tide against the Omicron winter surge.”

The Health Department’s Dec. 10 order implemented a statewide mandate requiring people be fully vaccinated against COVID-19 when visiting a New York business, or wear a face mask, that started Dec. 13, and remains in effect through Feb. 2.

“Obviously, all decisions of this sort involve the governor, but was done on recommendation of the Health Department and me as commissioner,” Bassett said. “...We undertook this as a statewide approach because omicron doesn’t pay attention to political boundaries. In just a few weeks, it had entered our boundaries, spreading all over the state, the nation and all over the world.”

Bassett defended the vaccine or mask mandate, saying the state needed to have a coherent approach against the mild, but highly transmissible omicron variant of the coronavirus, and against COVID-19 going forward.

Sen. Edward Rath III, R-Williamsville, asked if the health commissioner would consider amending statewide mandates depending on the demographics and needs of a community.

“I absolutely believe in having consultation with local health departments, local jurisdictions and not taking a cookie-cutter approach,” Bassett said.

Of the state’s COVID vaccine mandates, she later added, “...They weren’t tailored to a geography because kids in school are kind of the same everywhere, and we have the same concerns about health care workers everywhere.”

Democrats, who hold a supermajority in both houses of the Legislature, voted the nomination through both committees. Bassett’s nomination will be voted on by the full Legislature.

A short time later Wednesday, Senate Republicans held a rally in West Capitol Park to demand the end of statewide public health mandates in schools, for health care workers and others, and default to Health Department-issued recommendations and guidance, but allow local governments to have control of their public health response.

“We know for a fact undeniably that people who are vaccinated in boosted can still get COVID and still spread COVID,” said Senate Minority Leader Rob Ortt, R-North Tonawanda. “So why would we continue to force health care workers? Why would we not allow a test option? We have test to stay in school... Why wouldn’t we have a test to stay in your job?”

Ortt, who is vaccinated against COVID-19, said there is a difference between denying the significance of the pandemic and questioning if the policies are working.

Several senators said the vaccine mandate has exacerbated health care staffing shortages, impacting different regions of the state, and blasted a potential COVID vaccine mandate for school children this fall. They also railed against Hochul’s executive order forcing hospital to pause nonessential surgeries and procedures based on staffed bed capacity and other mandates.

“The department continues to do everything possible to ensure health care workers can protect themselves as well as the patients they care for against COVID-19, and that’s why the state requires health care workers to be fully vaccinated and receive a booster dose,” a Health Department spokesperson said Wednesday. “The data continues to demonstrate that a booster dose is needed to maximize protection against the virus over time and against new variants. Mandates have clearly increased vaccination rates and saved lives, as staying up-to-date with vaccinations and boosters is the best protection against serious illness and death from COVID-19.”

Long Island nurse Thomas Dowling and his wife were suspended from their jobs after refusing to get the COVID-19 vaccine last fall in time for the state mandate for health workers. They applied for religious exemptions, but a federal judge ultimately ruled religious exemptions do not apply to the order, forcing Dowling to leave his job, and the state.

“I’m sitting here ready, willing and able to work and I cannot work? Think about that, guys,” Dowling said. “This is just unacceptable. If you have a family member that gets injured, you know, because there’s lack of staffing, that’s on her [Hochul].

3 ways to ensure your deck stays high and dry

The Mental Health Crisis of Moms: What You Need to Know

Protect your vision with 7 habits for healthy retinas