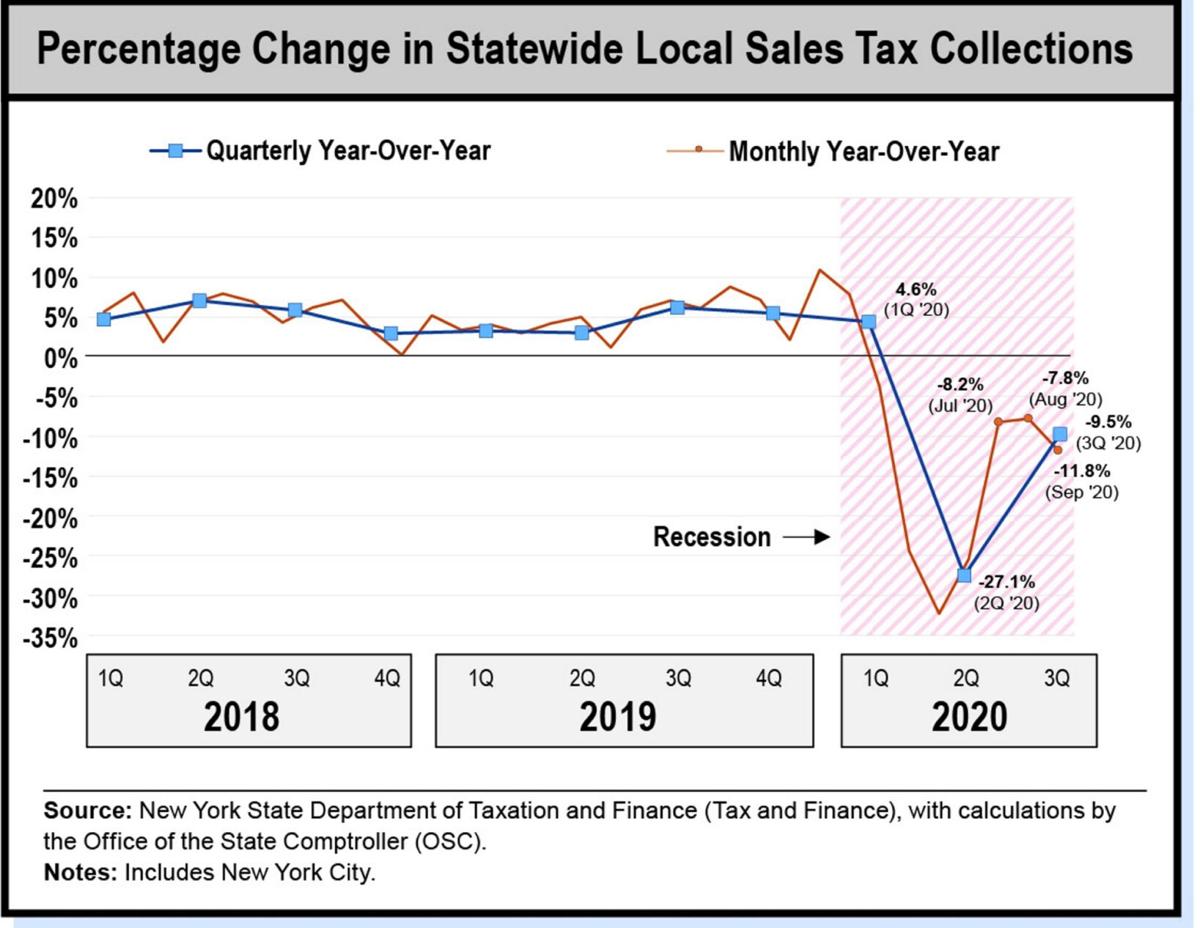 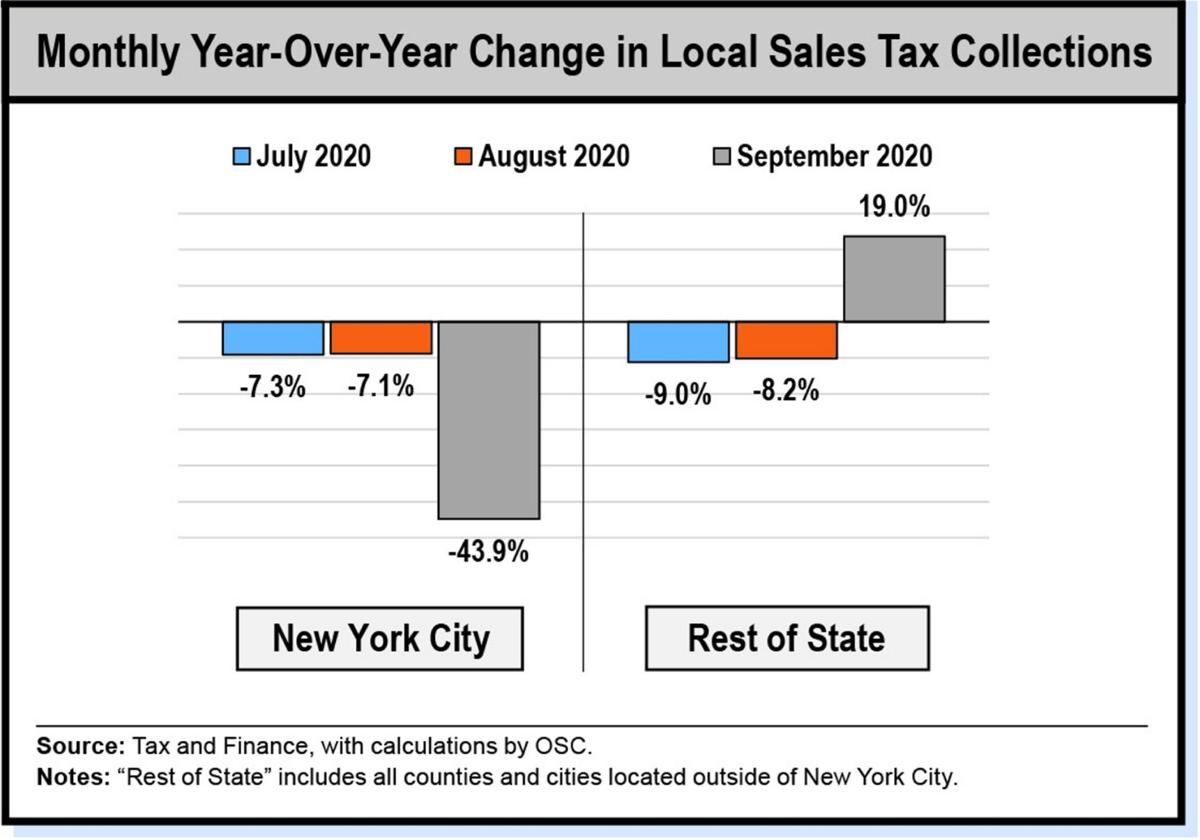 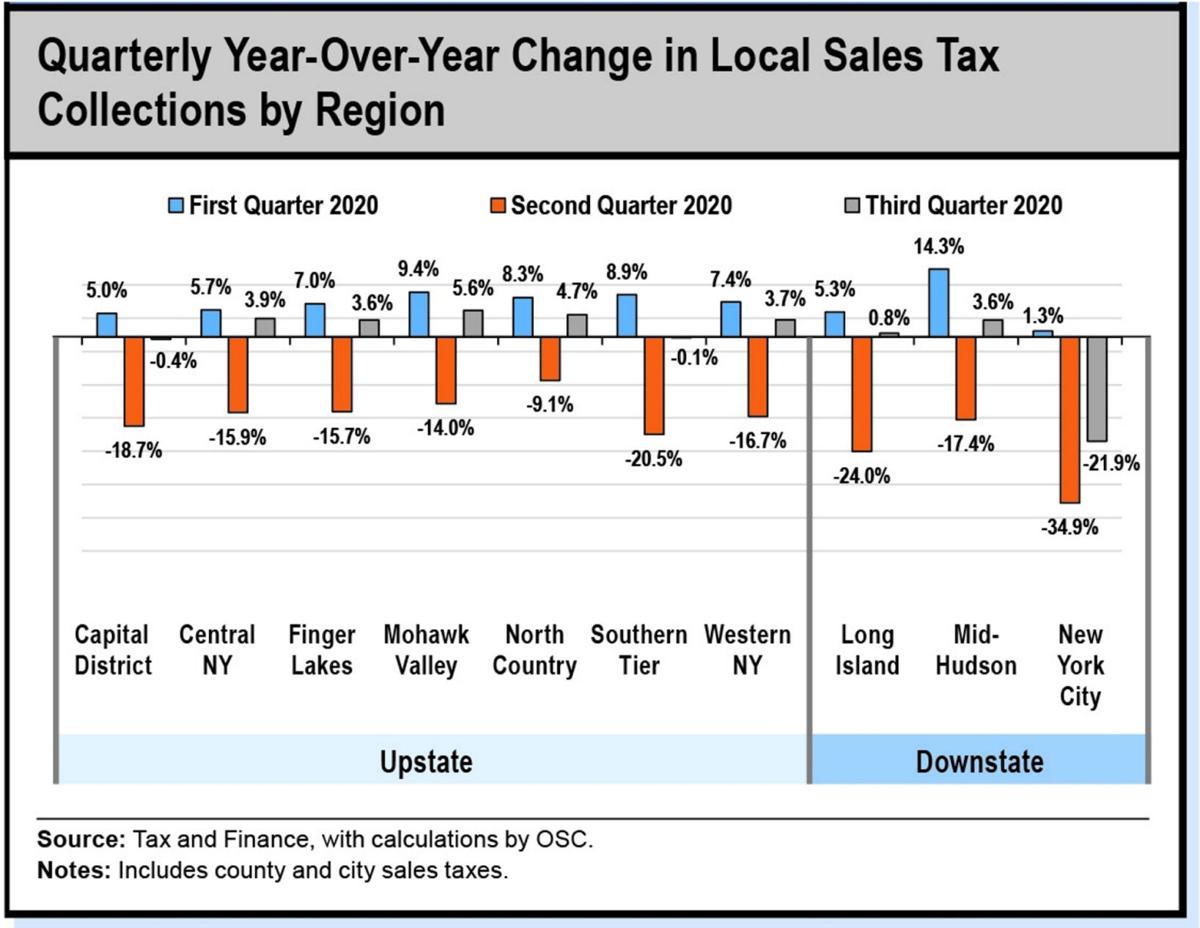 Statewide local sales-tax revenues declined by 11.8% or $225 million in September compared to this time last year, largely because of a deep reduction in New York City collections and over-distributions, according to a report released Monday by state Comptroller Thomas DiNapoli.

The state attributes the overall decrease to a steep 43.9% drop in New York City collections.

The rest of the state’s local sales-tax revenue increased 19% in September.

“However, neither of these variations is likely indicative of a major change in September,” according to the state comptroller’s report, “but are instead the result of a quarterly reconciliation of over-distributions to the city during July and August and under-distributions to most other counties during that period.”

“This [9.5%] decrease, while alarming in a typical year, was still a marked improvement from the 27.1% drop in the second quarter [or] April-June, which reflected the peak of the economic impact to date from the COVID-19 pandemic,” according to the comptroller’s report. “So far in 2020, year-to-date January-September, collections have declined by 11%, or $1.5 billion, when compared to the same period last year.”

The amount of money collected in sales tax was up 7.9% in Columbia County and 6.6% in Greene County during third-quarter 2020 compared to the third quarter of 2019.

“For the first three months of the year, we were exceeding previous year’s estimates because the economy was so good,” Groden said Monday. “Up through March, we were up about 10%, then COVID hit and we had some reduction, but I think with the closure of the malls and stores and that kind of stuff, people just shifted their spending to online purchasing, and we get that sales tax, so it was just kind of a change in medium, if you will.

Quarterly sales-tax returns are submitted to the state Department of Taxation and Finance in the last month of each quarter — March, June, September and December.

The state makes distributions to each city and county based on its percentage of total local collections in the same month of the previous year. The department reconciles distributions against quarterly reports and adjusts payments in those months accordingly.

Of $213.5 million in sales-tax revenue collected in the Capital Region in third-quarter 2019, Greene County reported $9.7 million to an increased $10.3 million between July and September 2020.

The third quarter reflected positive sales tax revenue for most counties outside of New York City, with a 2.5% increase in total collections from July through September. Counties reflected particularly strong growth with building material and garden centers, sporting goods, hobby stores and non-store or internet-based retail, according to the comptroller.

“Although it is, as yet, not exactly clear what is driving this growth, national retail sales did increase by 6.4% in the third quarter over the prior year,” according to the comptroller’s report. “Nearly every region of the state outside of the city saw at least some increase over the third quarter of 2019, although these increases were not as strong as in the pre-COVID first quarter.”

Many New York City residents who own second or temporary homes in the Twin Counties relocated upstate as the downstate metro area remained the virus epicenter for the nation, and at one point the globe.

Groden agreed the relocation of people brought many new people into Twin County communities who spent more at local businesses, including grocery stores and gas stations, which helped local sales-tax figures. The county administrator remains hopeful about local sales-tax collections through the end of the year.

“I think we’ll end the year pretty much flat from where we were last year,” Groden said. “Being up 3%, that’s within a margin of error, so one bad month could bring that back to zero. I’m basically considering it flat.”

The tourism industry is the main driver for Twin-County economies, which are often the first to see a market hit and the last to financially recover.

“We don’t have a definitive answer as to why that [increase] is, but my suspicion is, basically, I believe that tourism contributes an awful lot to that,” Keeler said. “Restaurants and outside dining has helped out a lot. I also believe the construction industry is doing very well at the moment.”

Residents also continue to make purchases for home-improvement upgrades during quarantine from big-box and local hardware stores including Lowe’s, Home Depot or Herrington’s Lumber in Copake, which have helped drive otherwise sluggish state and local economies.

“My speculation is that all that has contributed to an increase in the third quarter,” Keeler added.

“I think we would be unwise if we were to budget otherwise,” Keeler said. “We were still estimating that our decrease this year will probably be somewhere in the vicinity of 7% to 10%.”

The county will complete its fourth-quarter accounting in the middle or end of January, but it’s too soon to know the deeper impact on the region’s future financial outlook.

“We don’t know how this is going to turn out,” Keeler said. “I suspect retail and walk-in stores are going to suffer somewhat, but again maybe internet sales will offset that. But this is all speculation at this point.”