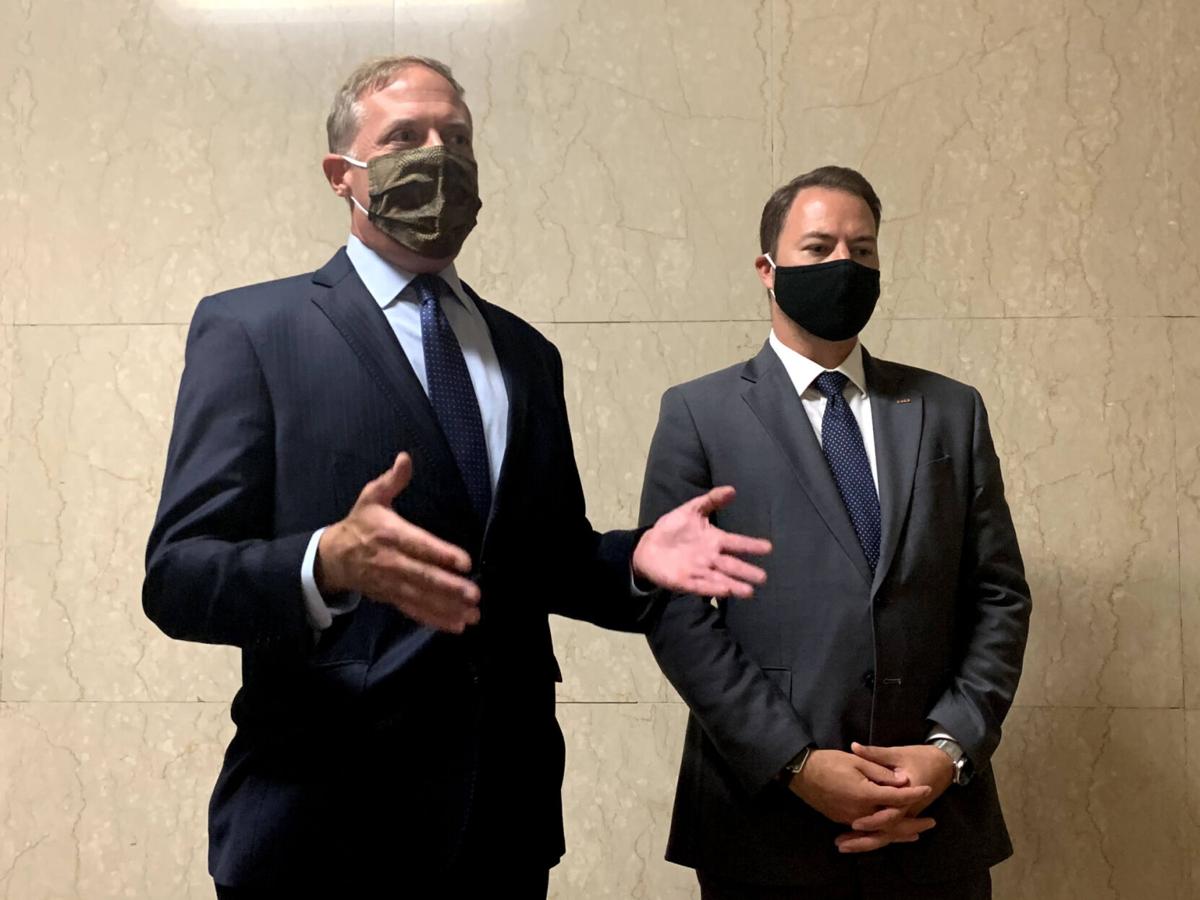 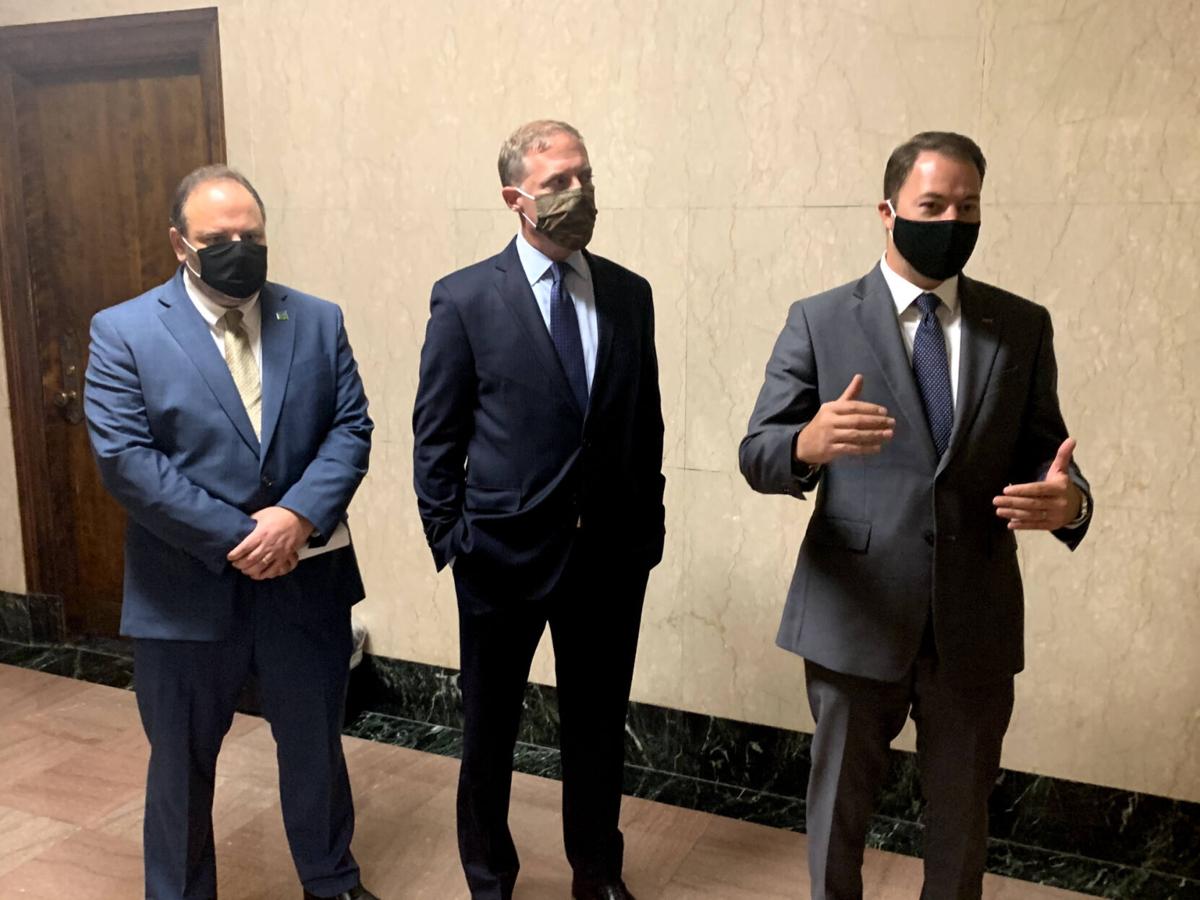 Senate Minority Leader Rob Ortt, R-North Tonawanda, right, speaks against the state’s changes to the redistricting process in the state Capitol on July 23 — a few hours before the legislation passed in the Senate and Assembly during the Legislature’s rare July 2020 session because of the COVID-19 pandemic. Kate Lisa/Johnson Newspaper Corp.

Senate Minority Leader Rob Ortt, R-North Tonawanda, right, speaks against the state’s changes to the redistricting process in the state Capitol on July 23 — a few hours before the legislation passed in the Senate and Assembly during the Legislature’s rare July 2020 session because of the COVID-19 pandemic. Kate Lisa/Johnson Newspaper Corp.

Commission member Elaine Frazier, chairwoman of the Capital Area Urban League Board of Directors, will draft bylaws by the panel’s next meeting scheduled for 10 a.m., Nov. 18.

Frazier volunteered to draft the commission rules, referring to her extensive work with nonprofit organizations.

“So for me, writing bylaws is chicken soup,” she said.

The commission agreed to set a budget and inquire with federal agencies for 2020 census data.

“We need data for the current lines, which, to me, would be a baseline going forward,” Wofford said.

“We will ask better questions if we get the information now,” Frazier added.

Frazier filed a request for the data and shared it with commission members, who also expressed a need to secure and design a website and devise a staffing plan for the redistricting work.

“Today’s exercise is a reminder we need more support in this area than we currently have,” Frazier said. “The best thing is for us to be honest about what we are willing to do.”

Reapportionment of the state Legislature’s 213 districts — 63 in the Senate and 150 in the Assembly — occurs every 10 years following completion of the U.S. Census to determine boundaries for congressional and state legislative offices, taking ever-changing population demographics into account.

Democrats controlled the state Assembly and Republicans held the state Senate when legislative district maps were drawn before the 2012 election.

Democrats have controlled the Assembly for decades and satisfied the chamber’s map-drawing duties. The GOP firmly lost its grasp on power after the 2018 elections, and will not have a say in how the next Senate lines are devised.

Members Thursday also discussed setting a timetable for the work.

“I think the state constitution does a good job of designating a timeline,” Martins said.

New York voters approved a constitutional amendment in 2014 to change the redistricting process beginning with the 2020 census.

The new state legislative and U.S. congressional lines are supposed to be in place for the 2022 elections.

Democrats’ new constitutional amendment plan must be approved again by a separately elected session of the Legislature. The plan to amend the constitution is slated to go before voters on the Nov. 2, 2021, ballot.

Gov. Andrew Cuomo has no approval or veto authority on constitutional amendments.

If state lawmakers vote twice to reject the commission’s proposal, the Assembly and Senate can amend the maps.

Lawmakers passed bills sponsored by Senate Deputy Majority Leader Michael Gianaris, D-Queens, on July 23. The legislation was delivered to the secretary of state July 24, but has not been delivered to the governor for his signature or veto.

The procedural changes approved by Democrats this summer include major revisions that eliminate full representation of all legislative conferences and ensure that only one political party is needed to approve final plans.

Under state law, a plan must have seven Yes votes to receive to receive approval of the Independent Redistricting Commission. Because the speaker of the Assembly and temporary president of the Senate are members of the same political party, such approval must also include affirmative votes by at least one member appointed by both legislative leaders.

“How district lines are drawn is crucial to ensure our democracy functions properly and serves all people. For too long, redistricting has been a partisan game that has polarized our country,” Stewart-Cousins said July 15. “As we approach the next redistricting, it is crucial that we establish a process focused on fairness.”

The legislation allows a redistricting plan to be approved by the commission with a simple seven-person vote in favor of a plan, diminishing the input of the minority party in the process and eliminating the requirement at least one member appointed by both minority leaders approve the plan.

“The independence commission has barely started its work,” Ortt said in the state Capitol on July 23, a few hours before the legislation passed both houses of state Legislature.

“The budget has not been released, they have not been allowed to really begin work. To introduce legislation to change the process makes it less independent. They want to take the independent out of the Independent Redistricting Commission.

“That’s a slap in the face to New Yorkers.”

Barclay criticized Democrats for rushing to change the commission’s independent redistricting process, saying the push was because of the state’s one-party legislative rule.

“They’re changing it so they can easily get [redistricting lines] passed,” he said in Albany on July 23. “We live in a blue state trying to stamp out any Republican voice.”