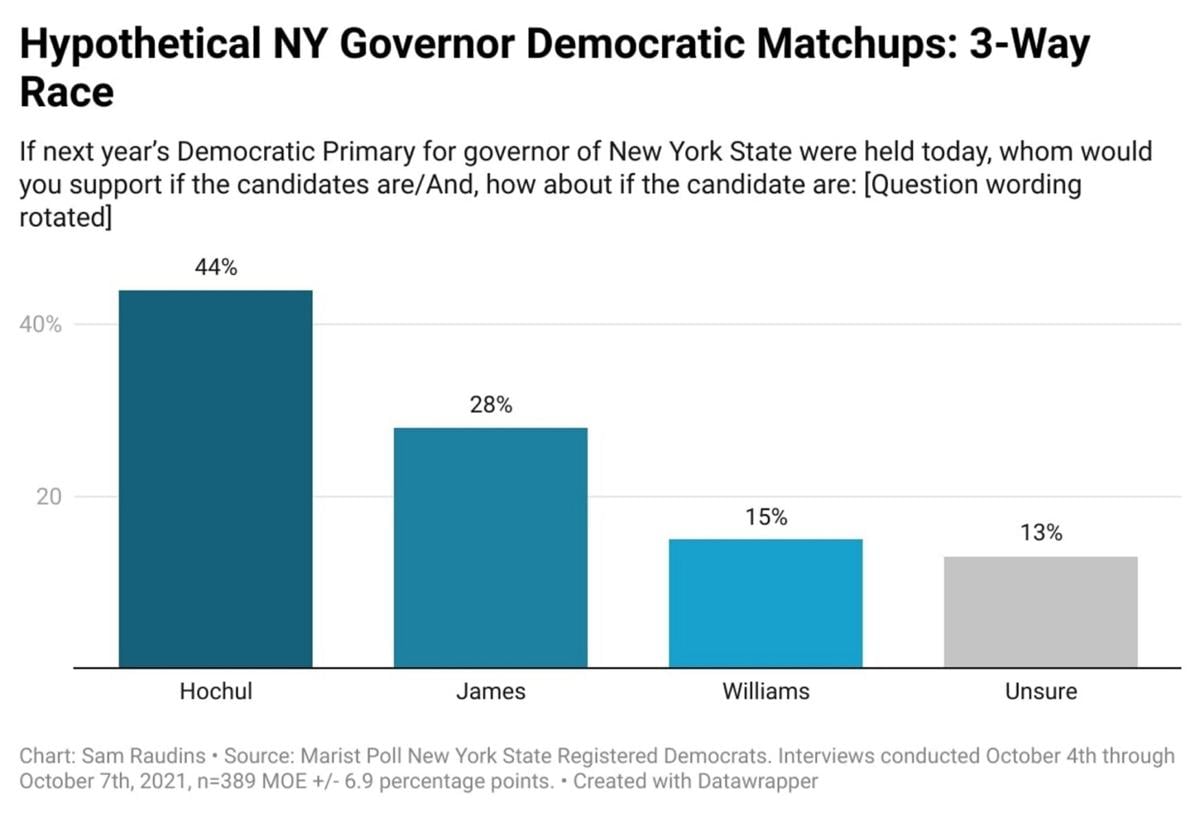 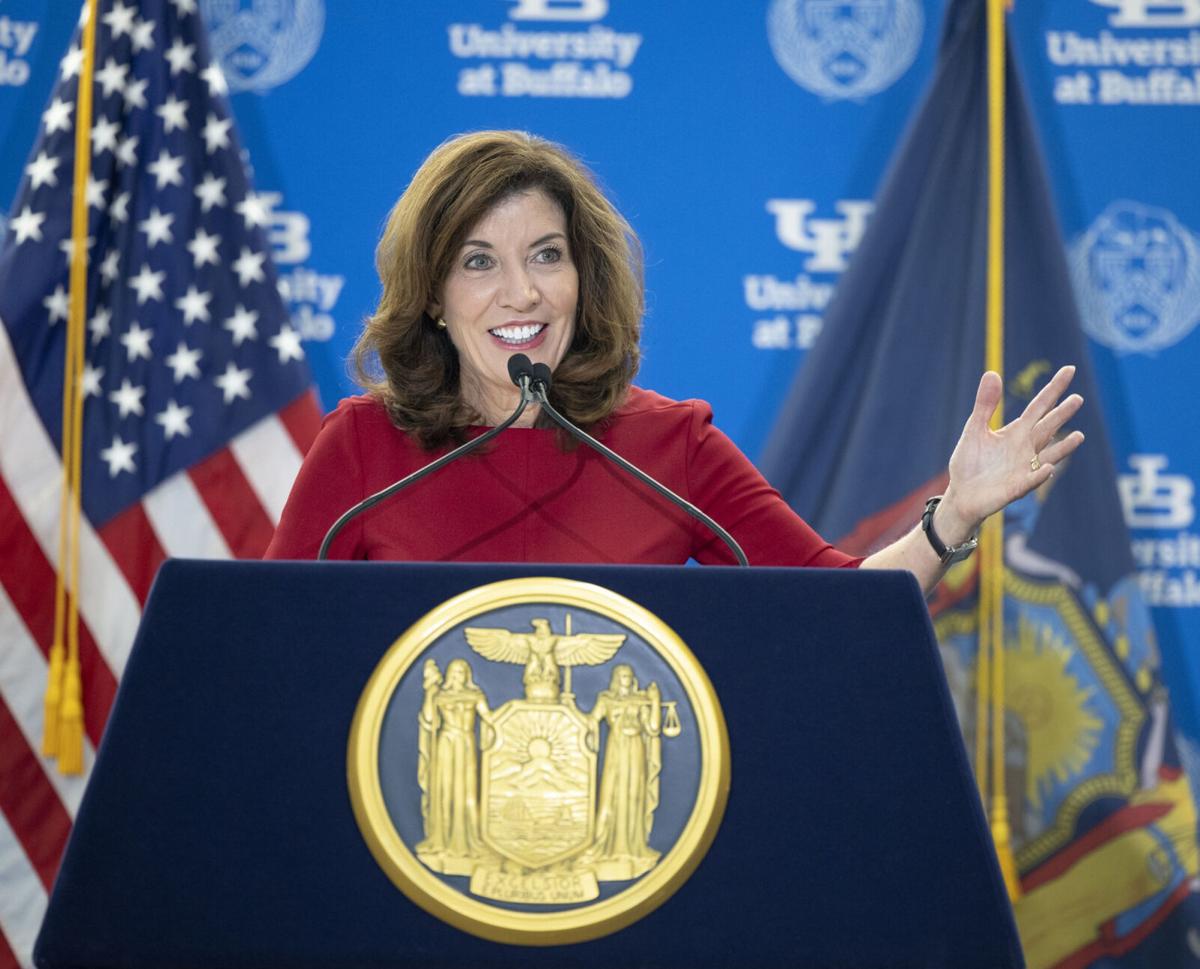 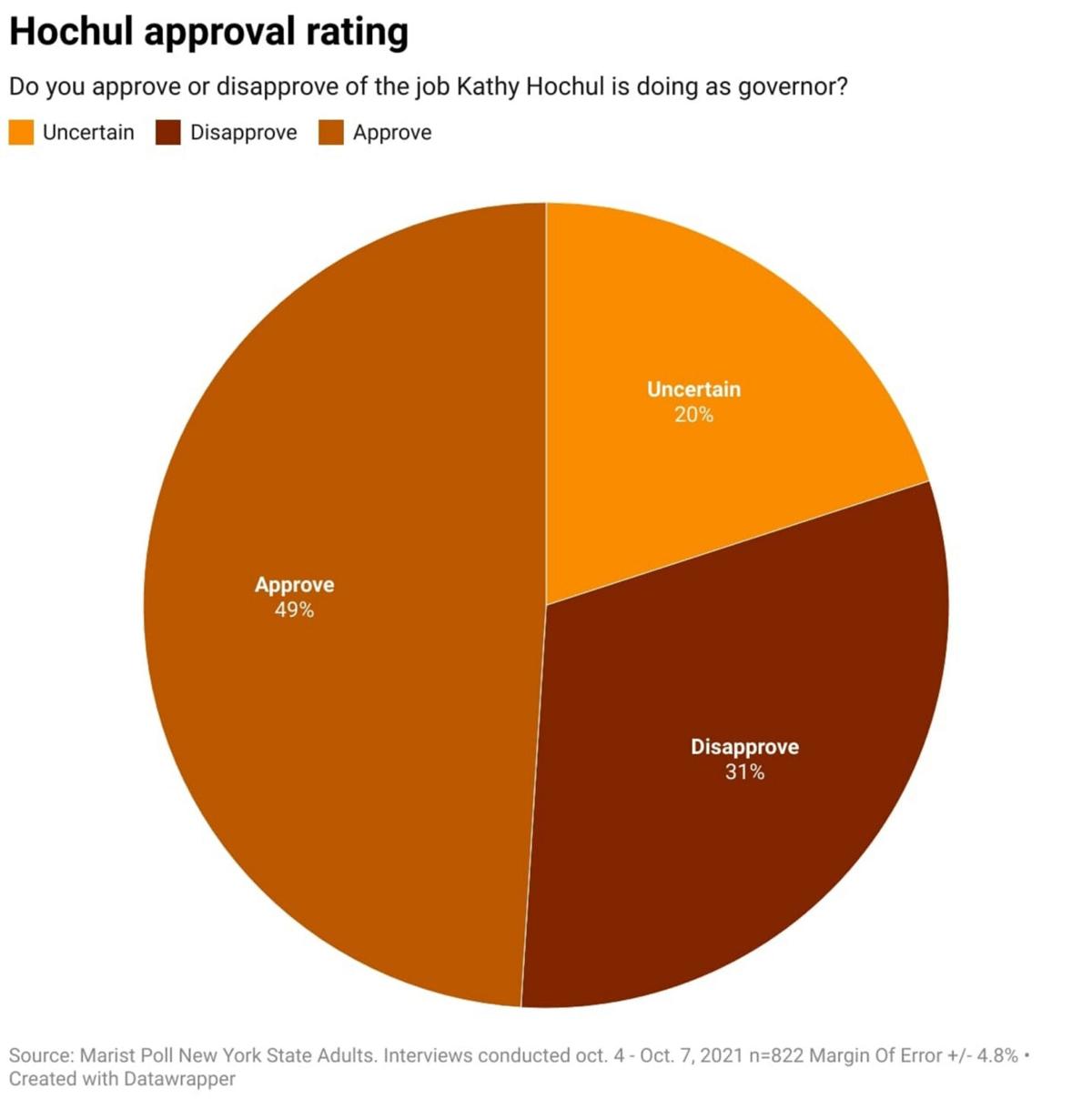 Gov. Kathy Hochul is ahead of potential opponents and leads with support from New Yorkers after 50 days in office, according to a new Marist poll released Tuesday, as potential Democratic challengers consider throwing their hat in the political ring for the 2022 gubernatorial race.

About 55% of surveyed adults favorably rated Hochul with her approval rating at 49% — an increase of 18 percentage points. About 31% of the 822 New York adults interviewed live by telephone between Oct. 4 and Oct. 7 disapprove of the state’s new leader.

Roughly 1 in 5 New Yorkers, or 20%, responded they are unsure about Hochul’s performance since she took office Aug. 24.

“Those people who framed the governor as fair, many of them, actually the plurality of them, approve of the job that she’s doing,” said Lee Miringoff, director of the Marist Institute for Public Opinion. “For 1 in 5, the jury is still out. But to start with, 49% and 20 still on the table shows that she’s doing very well with the possibility of improving as time goes on.”

The 822 respondents include 732 registered voters and 389 registered Democrats. Results are statistically significant with a margin of error ±4.8 percentage points.

Hochul also came out ahead in two hypothetical match-ups to beat potential opponents to secure the Democratic gubernatorial nomination.

About 44% of polled registered Democrats said they would support Hochul if next year’s state Democratic primary took place today over 28% for James and 15% behind Williams. Thirteen percent of respondents said they were uncertain.

“It’s a double digit advantage for the incumbent, Kathy Hochul, as she thinks about an election campaign,” Miringoff said. “She clearly has established herself with the Democrats as governor statewide. The notion that she’s not well known and views of that sort don’t hold up in the numbers.”

Hochul’s campaign did not immediately return a request for comment Tuesday about the poll results.

Roughly 77% of New Yorkers do not want former Gov. Andrew Cuomo to seek re-election to the state’s highest office next year, including 74% of surveyed Democrats.

About 42% of Democrats have a favorable view of the former governor and 53% have an unfavorable one, according to the poll.

Cuomo had $18 million leftover in his campaign war chest when he left office in disgrace in late August. The former governor, who remains under criminal investigation at multiple levels of government for multiple scandals, could seek future public office because the Assembly Judiciary Committee suspended its impeachment probe into Cuomo after he announced his resignation.

Hochul continues to poll ahead of potential challengers with Cuomo added to the mix with 36% support of surveyed registered Democrats. In the four-way matchup, 24% said they would vote for James, 19% for Cuomo and 9% for Williams with 12% unsure.

“When you look at how they’re being perceived, Hochul does enter this as a front-runner, and if former Gov. Cuomo gets into this, he is going to need to have a substantial redefinition — a restatement of how voters in New York, especially Democrats at least for the primary, for how they view and how they perceive him,” Miringoff said. “Because right now, the numbers are upside down.”

The poll shows 58% of registered Democrats view James favorably as a potential candidate, and nearly half view Williams the same way at 47%. Williams is, however, not well known with 42% of Democrats answering they are unfamiliar with the downstate advocate.

Hochul, a Buffalo native, has a solid approval rating around 49% in all regions of the state, including New York City, the surrounding suburban counties in the downstate metropolitan area and across upstate.

About 47% of New Yorkers approve of Hochul’s job on the economy, while 55% gave her favorable marks of her handling of the coronavirus pandemic.

Roughly half believe she is representing all regions of the state and 46% agree she is changing the way things work in Albany for the better, according to the poll.

Mobile telephone numbers were randomly selected based upon a list of telephone exchanges throughout the state from Dynata. Each region of the state was represented. The mobile sample was supplemented by respondents reached through random dialing of landline phone numbers.