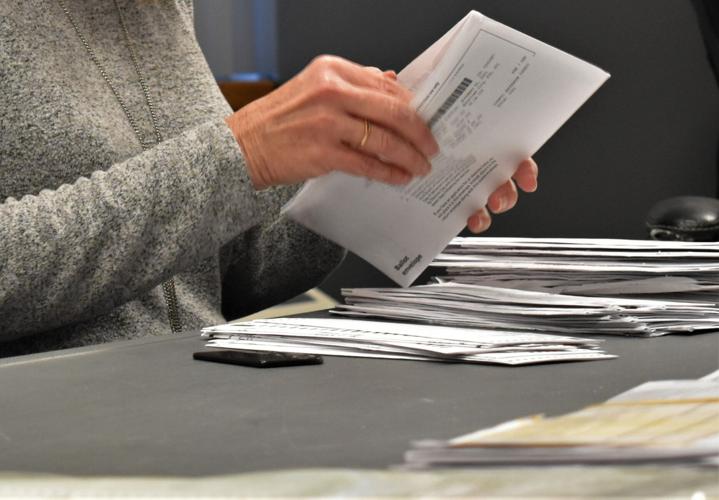 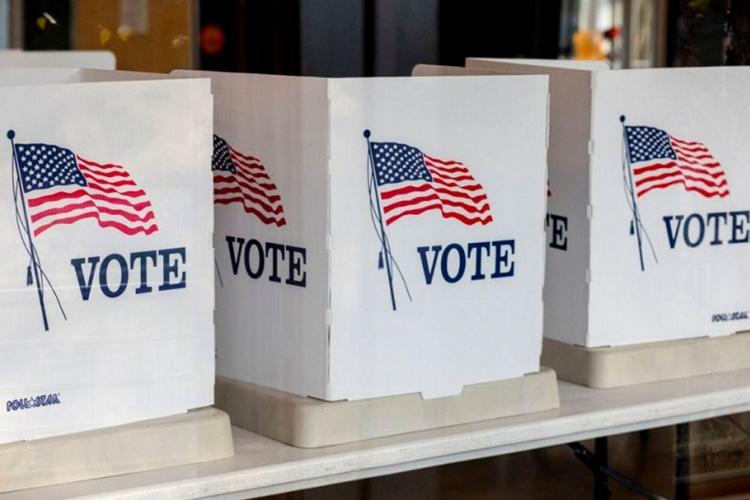 (Joel Bissell | MLive.com) A bill arrived on Gov. Kathy Hochul’s desk Friday to allow New Yorkers to request to vote by absentee ballot for the risk of contracting or spreading a communicable disease that could cause the public to become ill. The law expires at the end of 2022. 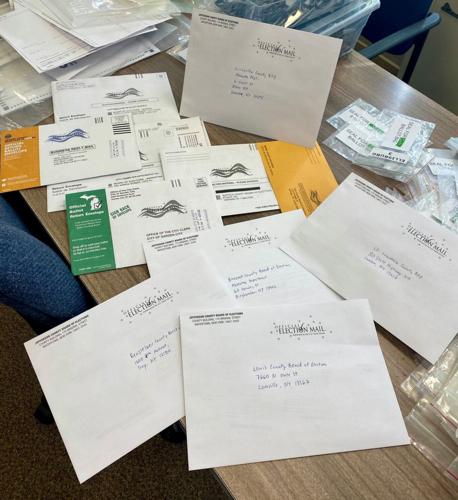 13 absentee ballots meant for other counties or states were mistakenly given to the Jefferson County Board of Elections in 2020. (Photo provided)

(Joel Bissell | MLive.com) A bill arrived on Gov. Kathy Hochul’s desk Friday to allow New Yorkers to request to vote by absentee ballot for the risk of contracting or spreading a communicable disease that could cause the public to become ill. The law expires at the end of 2022.

13 absentee ballots meant for other counties or states were mistakenly given to the Jefferson County Board of Elections in 2020. (Photo provided)

ALBANY — Lawmakers passed several bills this week to expand New Yorkers’ access to voting by absentee ballot and a portal to track their submission as the COVID-19 pandemic marches on, reviving a political debate about election integrity.

Gov. Kathy Hochul signed a bill into law Friday to allow New Yorkers to request to vote by absentee ballot for the risk of contracting or spreading a communicable disease that could cause the public to become ill through the end of 2022.

“No one should have to choose between exercising their right to vote and protecting their health and safety,” Hochul said in a statement Friday. “This legislation will ensure the pandemic does not create inaccessibility for voters during upcoming elections and help protect New Yorkers’ access to the ballot.”

For more information on absentee voting and how to apply for an absentee ballot, visit www.elections.ny.gov/VotingAbsentee.html

The measure continues an expansion of reasons the public can request an absentee ballot to vote in any election this year due to the ongoing coronavirus pandemic. It expires Dec. 31.

Voters requesting an absentee ballot must provide the state Board of Elections a reason for the request, per state Election Law. Other accepted reasons include a person’s physical inability to appear at a polling place due to illness, physical disability or taking care of someone ill or disabled.

Republicans largely voted against the measure, citing concerns expanded absentee ballots could open up the state for increased election fraud — stemming off the lie that the results of the 2020 presidential election were not valid.

Republican state Board of Election Commissioner Anthony J. Casale and co-chair Peter S. Kosinski sent letters to Gov. Hochul last week, urging her to veto the bills to continue an electronic absentee ballot application system and a law permitting the canvassing of absentees up to 11 days before Election Day.

The laws are a threat to the integrity of state elections, they said.

“Taken together, these measures appear to further a design by Gov. Hochul to shift voting in New York from poll site in-person voting to absentee voting while making the absentee voting process less secure and more susceptible to manipulation,” Casale and Kosinski said in a joint statement. “While these changes are being sold to the public as enhancing voting in New York, the real effect will be a less reliable voting process more suspect in the eyes of the voters. They dismantle security features at the front end of the process and remove due process rights at the back end. This is a new and unnecessary change in our voting when voting integrity is already being questioned by the public. We should be bolstering the integrity of the vote not undermining it.”

Every local board of elections questions a handful of ambiguous or potentially fraudulent ballots each election cycle every year.

Republican Party Chairman Nick Langworthy said many times throughout 2021 that New York has secure elections and ensured New Yorkers to have faith in their officials and election system. U.S. Rep. Lee Zeldin, R-1, the leading Republican nominee in this year’s gubernatorial race, has also said New Yorkers must have faith in the state’s election system.

Officials do not have evidence of widespread voter fraud, Democrat state Board of Election commissioners Douglas A. Kellner and Andrew J. Spano said Friday.

“Since the start of the pandemic, New York state voters have relied on absentee voting as a safe and secure method of casting their ballot,” Kellner and Spano said in a joint statement. “Absentee voting allows voters to avoid long lines and further mitigate the spread of the virus. Absentee ballots are carefully canvassed and reviewed by bipartisan Board of Elections staff, and any instances of potential voter fraud are investigated. The state Board of Elections provides guidance to counties to ensure laws regarding absentee voting are followed, and all absentee ballots are accurately counted. There is no credible evidence of widespread voter fraud.”

Senators passed additional legislation Thursday to amend state Election Law to continue a statewide online absentee ballot tracking system so voters can track the status of an absentee ballot application and delivery from the request until the vote is cast.

Voters can check the status of their ballot on the state or their local board of election’s website until April 1.

Republicans all voted down the bill, which passed with the Democratic majority and was sent to the Assembly.

If signed into law, it would also create a more stringent system to require an e-signature on the absentee ballot application. A wet signature is required on the ballot itself.

The legislation authorizes the use of signatures that are already in the custody of the state, such as with the Department of Motor Vehicles, Board of Elections or other agencies. The person requesting an absentee ballot must consent to the use of their signature that’s on file with other agencies.

“Just like someone who orders your signature manually, the person doing so will be subject to penalties if they are doing it fraudulently,” Gianaris said.

Hochul included funding for local boards of elections to execute the portal in her executive budget released Tuesday.

“Nobody should be forced to choose between their health and their vote,” Dinowitz said in a statement Friday. “Tens of thousands of New Yorkers have availed themselves of the expanded absentee ballot eligibility, and the continuation of this law through the end of 2022 is an important boost to our democracy. As we watch states around the country debate and enact restrictions to voter access, I am proud that New York has taken a stand on the other side of the debate.” Lawmakers initially passed legislation to expand the definition of an “illness” to include when a voter cannot appear at a polling place due to risk of contracting or spreading an illness to the public in July 2020. It expired Dec. 31, 2021.