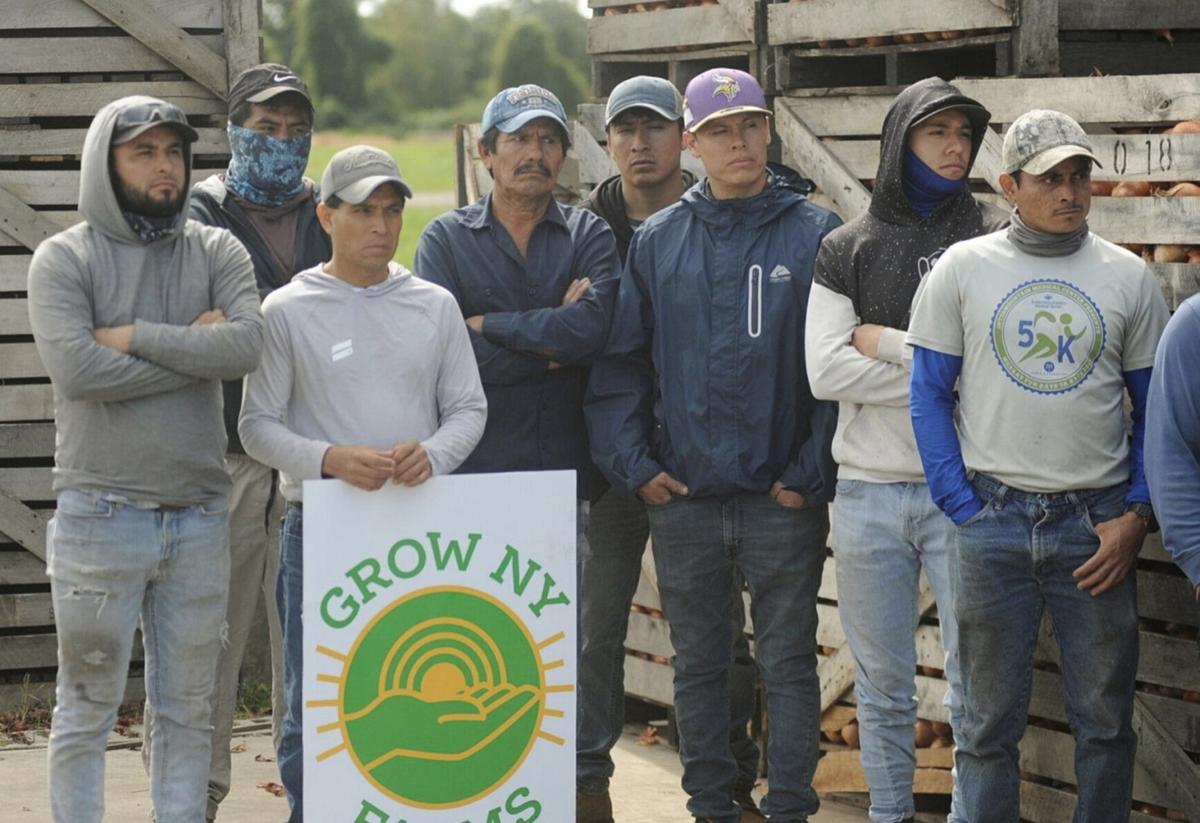 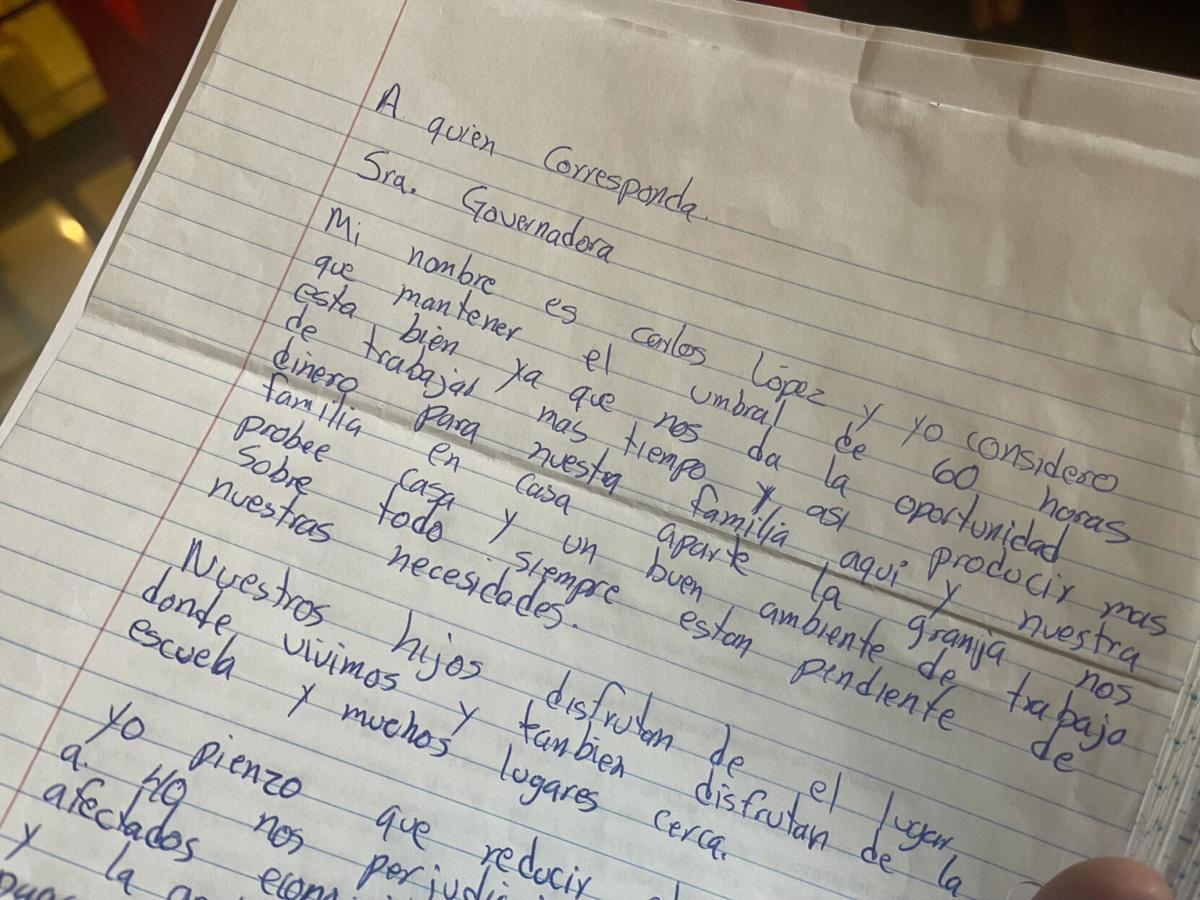 Kate Lisa/Johnson Newspaper Corp. A letter from New York migrant farm laborer Carlos Lopez was one of hundreds of hand-written or typed pieces of correspondence hand-delivered to Gov. Kathy Hochul’s office Wednesday against the Wage Board’s pending decision to lower the overtime threshold for farmers to 40 hours per week. 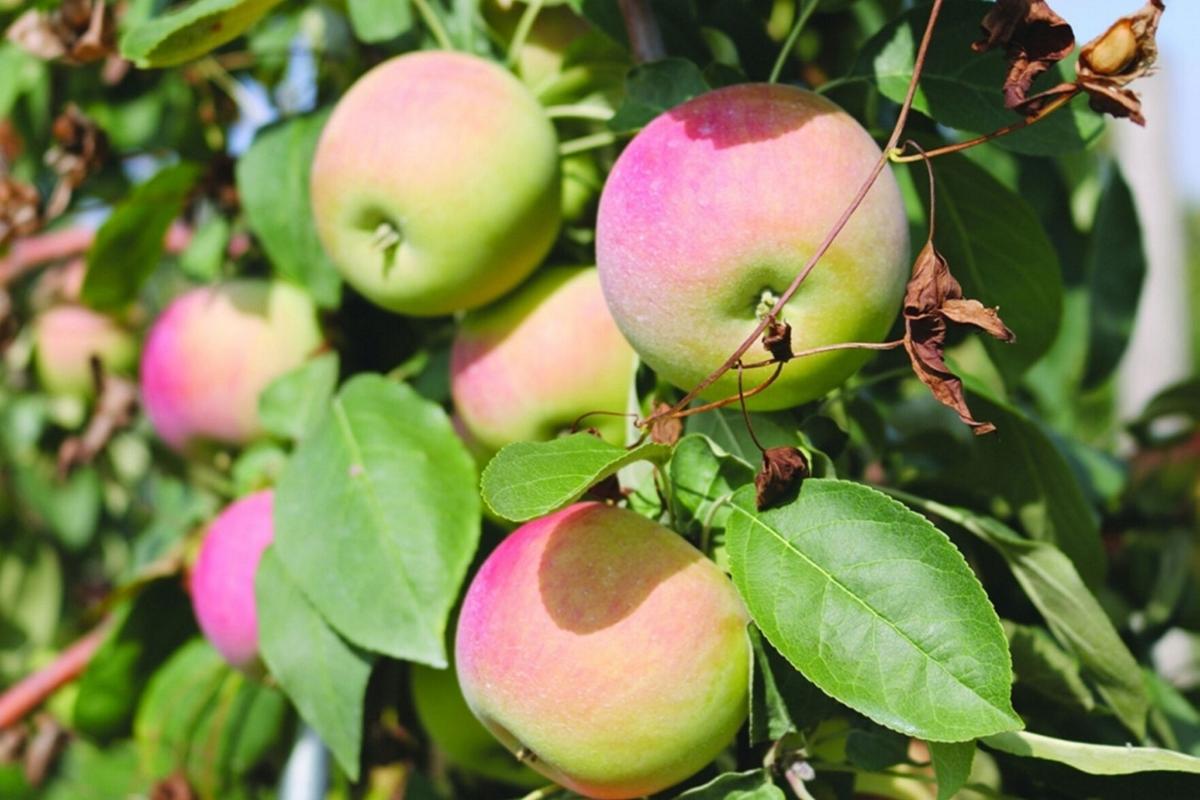 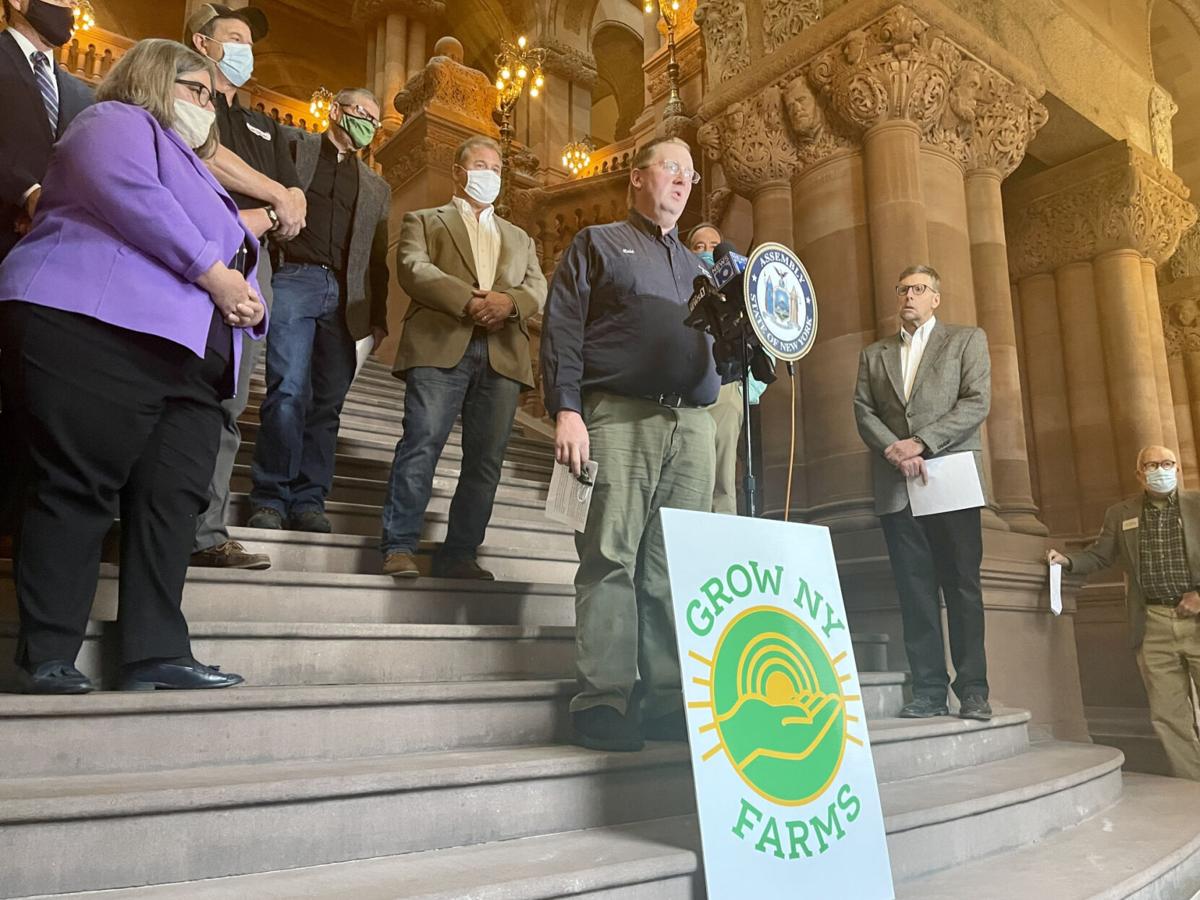 New York Farm Bureau Board of Directors Vice President Eric Ooms, who owns Ooms Farms in Kinderhook, Columbia County, speaks against the proposed 40-hour work week for farmers in front of the Million Dollar Staircase in the state Capitol on Dec. 1.

Kate Lisa/Johnson Newspaper Corp. A letter from New York migrant farm laborer Carlos Lopez was one of hundreds of hand-written or typed pieces of correspondence hand-delivered to Gov. Kathy Hochul’s office Wednesday against the Wage Board’s pending decision to lower the overtime threshold for farmers to 40 hours per week.

New York Farm Bureau Board of Directors Vice President Eric Ooms, who owns Ooms Farms in Kinderhook, Columbia County, speaks against the proposed 40-hour work week for farmers in front of the Million Dollar Staircase in the state Capitol on Dec. 1.

The majority of people who testified Tuesday during the first of three hearings this month to potentially lower the overtime threshold for farm workers to 40 hours expressed concerns the increased labor costs will threaten the livelihoods of small family farms and negatively impact the upstate economy.

The Farm Workers Wage Board under the state Labor Department held its first of three additional public hearings Tuesday to decide to accept or reject a proposal to lower the agriculture overtime threshold to 40 hours from its current standard of 60.

Nearly 200 people attended and participated in the first virtual hearing with testimony from farmers, farm laborers and advocates from across the state, including a New Yorker as young as 11 weighing in.

Casey Porter, with Porterdale Farms Inc. in Jefferson County’s Adams Center, is a fourth-generation dairy farmer and pleaded with the Wage Board to maintain the current overtime threshold at 60 hours.

“Many of our employees are like family,” she said. “They understand ... we cannot pass our increased costs off to our consumers like other businesses have the luxury of doing. They understand how the weather can make or break at crop season and how that affects the cows. How regardless if tomorrow is Christmas or Thanksgiving, the cows still need to be fed.”

Each person had three minutes to provide public testimony.

Wage Board members were given an opportunity with each speaker, but most did not ask people who provided testimony any questions.

The years-long debate is centered on farm workers who want overtime pay after 40 hours to be equal with laborers in other industries, and fervent pushback from small- to mid-sized farmers who say they cannot afford the resulting estimated 42% cost increase.

Porterdale Farms employs 32 people year-round, and 35 during crop season. Porter expressed her apprehension about the future of farming in New York if the threshold is lowered.

Several migrant farm workers who spoke through the interpreter said reducing the state’s overtime threshold for farm workers would not be convenient and would reduce the amount they could earn to send home to their families. They added they would seek work in other states without the same labor limitations.

Northeast Dairy Producers Association Chair John Dickinson was one of dozens of farmers and agricultural stakeholders to speak against lowering the overtime threshold.

Dickinson has a farm with 3,000 cows and 35 employees in Washington County and said some employees left his farm last year to work in states with a higher threshold, like Michigan.

“If this gets lowered any farther, it’s going to create significant competitive disadvantage to other areas of the country,” he said. “I’ve always allowed workers to work as many hours as they wanted to earn more money and to get ahead. They work right alongside of us, hand in hand. It’s not demanded, it’s not expected.”

A handful of others spoke in favor of reducing the threshold to 40 hours, noting migrant farm workers often avoid speaking out about unsanitary housing conditions, when their paycheck is not what it is supposed to be or dangerous working conditions.

“It also means not testifying about lowering the overtime threshold,” said Margaret Gray, an associate professor of political science at Adelphi University.

Gray has spoken with hundreds of farm workers since starting research of state farm workers 22 years ago, and said that migrant workers have often told her they are taught to keep quiet.

“These are New York workers who not only live here, but they’re real people who feed us they send their children to our schools, and they contribute to our economy by spending their money here and paying taxes,” Gray said. “Farmworkers shouldn’t bear the burden of farm owners’ challenges. Neither should their financial status or physical health be any less important than those farmers, or any New Yorker.”

“Jim Crow-era racism excluded the nation’s largest Black and brown farm workers as the negotiation tactic in getting this historic legislation passed,” he said. “New York must act now. There’s simply no more economic justification to continue to deny our farm workers a standard over time trigger after 40 hours a week or any other basic labor rights.

“We’ll be on the 40-hour mark established for all other workers,” he added. “This is not about putting farm workers ahead of farms. This is about lifting an entire industry in our great state. It is about basic human rights and ensuring that farm workers will be treated humanely and respect with respect and dignity.”

Several farm owners and agricultural workers who testified cited a recent state-commissioned report released by the Cornell’s College of Agricultural & Life Sciences that projects many farms across the state will be forced to close or shrink their enterprises if the 40-hour week for farm workers is implemented. The report has faced blowback and questions about its bias and validity.

Various lawmakers on both sides of the aisle have weighed in on the issue, either forcefully speaking out against the potential fiscal harm to the state’s agricultural industry if the threshold is lowered — especially amid financial hardship incurred during the COVID-19 pandemic — or have said the state must increase its investment in small farms and the industry if the significant change is made to its labor.

Hawley and Borello staunchly advocated to the Wage Board against lowering the overtime threshold.

Wage Board Chair Brenda McDuffie thanked the witnesses and encouraged as many people as possible to participate in the upcoming two hearings.

“It’s important that we hear from you,” she said at the culmination of Tuesday’s hearing. “I know I speak for all of my fellow board members as well as the individuals who are working with us that we really appreciate your participation. We encourage your participation Your voice is important as we deliberate over this very, very important matter.”

The current 60-hour threshold was established under the 2019 Farm Laborers Fair Labor Practices Act, and took effect in January 2020.

The Wage Board was originally set to make a decision on reducing the threshold to 40 hours by Dec. 13 after more than a two-year debate on the issue, but Labor Department executives scheduled the three additional hearings without publicly meeting or discuss the additional hearings.

To register to testify, visit dol.ny.gov/farm-laborers-wage-board-hearings