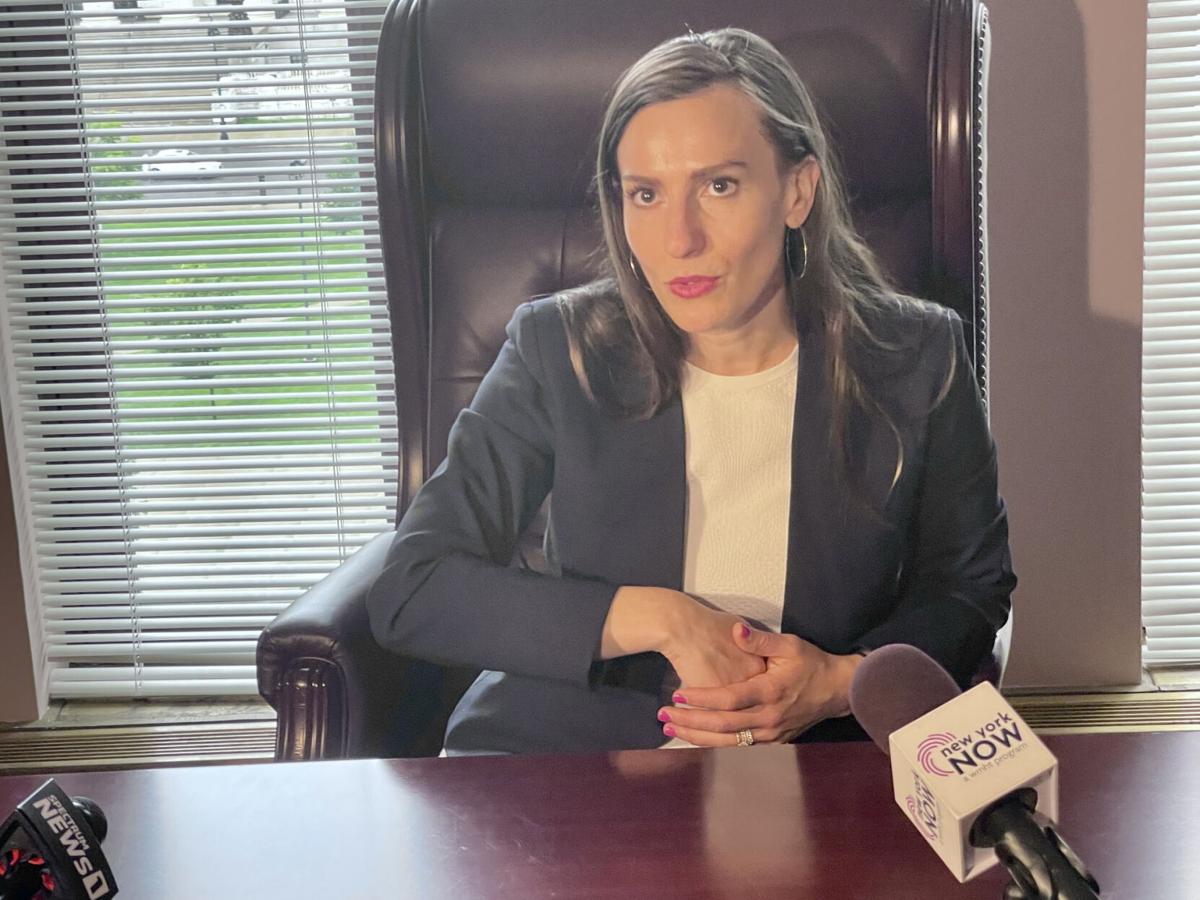 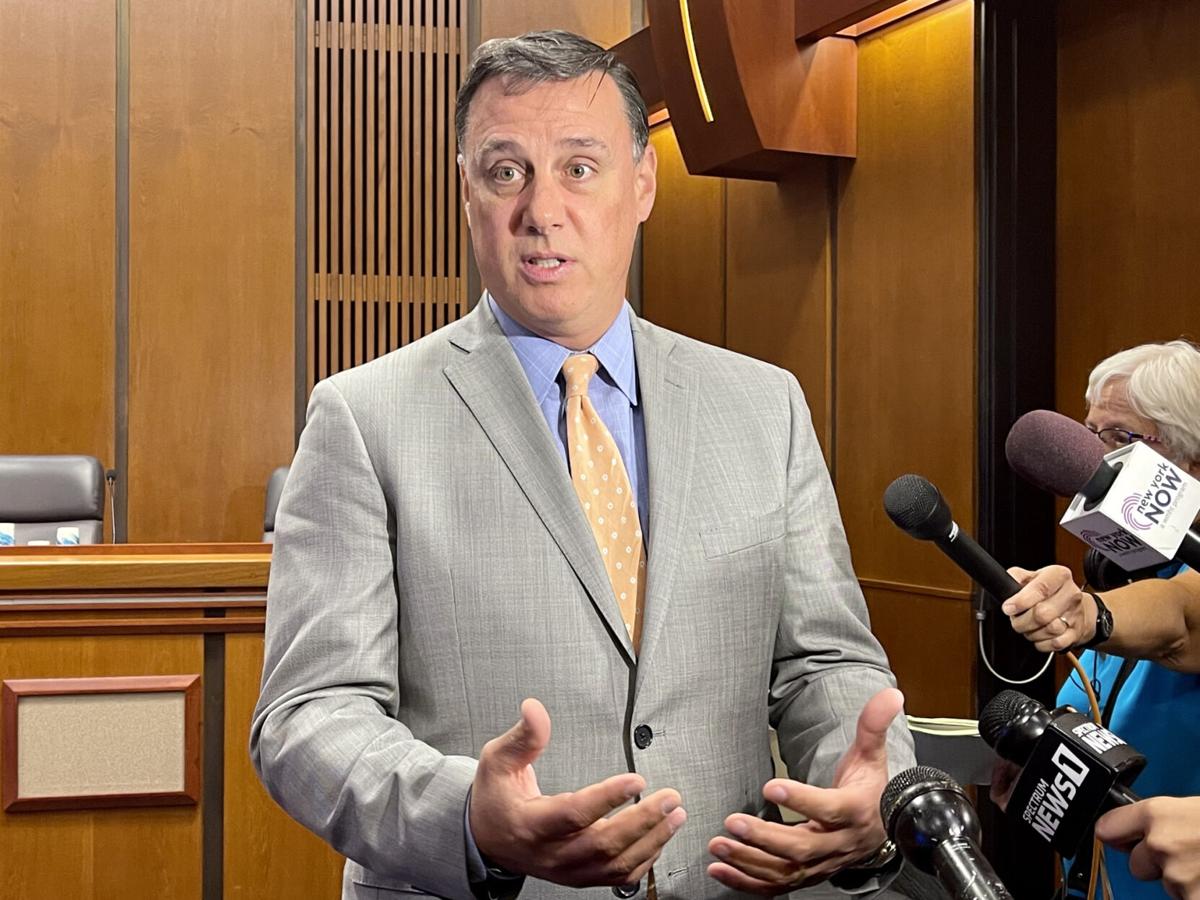 ALBANY — The Senate’s hearing to examine New York’s ethics and oversight was postponed Monday after concerns about following the state Open Meetings Law with some lawmakers participating virtually and others attending in-person.

Officials need clarification, they said Monday, after more than 15 months of conducting session or meetings virtually because of the COVID-19 pandemic, if the Open Meetings Law applies to hearings, and if lawmakers can continue to attend via Zoom or teleconference.

“This is something that’s open to interpretation,” said Sen. Alessandra Biaggi, D-Bronx. “There is absolutely no circumstance whatsoever that I will ever put myself in, put this committee in, put this government in where we have any kind of violation of any ethics [rules]. We always want to be honoring the spirit of what I believe ethics is which is open, transparent as well as making sure that we can have as much participation as possible.

“Because there is no question that we will not even give the perception of violating the Open Meetings Law, we are postponing it until we have clarity around this issue,” Biaggi continued, adding it could be an advisory opinion, memo or analysis. “Once we do, then, we will move forward because this hearing is happening.”

Biaggi chairs the seven-member Senate Ethics and Internal Governance Committee slated to hold Monday’s 10 a.m. public hearing to examine the state’s system of ethics oversight and enforcement and how it could be improved.

The hearing will likely be rescheduled within a week or two, representatives with the Senate Majority conference said Monday. The senator said the hearing will happen later this summer.

A reporter in the Capitol’s Legislative Correspondents Association was going to file a complaint with the Committee on Open Government the hearing would violate the Open Meetings Law without an in-person quorum, a spokesman with the Senate Democratic said.

The Open Meetings Law requires the public be able to attend a hearing at any site an official is participating from. Public officials were exempt from holding in-person meetings or meeting other in-person requirements to conduct public business during the state’s pandemic-related state of emergency, which expired June 25.

“In light of the fact this is an ethics hearing... we certainly don’t want to go forward and have some sort of an issue whether it’s just the appearance of an ethical violation or, in fact, an actual violation,” said committee member Sen. Anthony Palumbo, R-New Suffolk.

Biaggi hopes to conduct two hearings about state ethics before legislative session resumes in January, including one this summer and another in December.

Judge Sanford Berland, the executive director of the Joint Commission on Public Ethics, or JCOPE, is scheduled to testify first in the Senate’s hearing on ethics and oversight. His prepared written testimony, submitted to the committee ahead of time, was unavailable Monday.

Gov. Andrew Cuomo established JCOPE as part of the Public Integrity Reform Act of 2011. The panel has been criticized for being too close to the governor and an unreliable ethical watchdog.

“I don’t believe that the essence and the spirit of JCOPE in its creation was actually set up in a way to succeed, I think JCOPE was set up in a way to fail,” Biaggi said. “...Part of what makes this entity problematic is that it was created by an executive that has no interest in ethics.”

Democratic senators from Alaska and Rhode Island and members of the state’s Sexual Harassment Working Group were also scheduled Monday to answer lawmakers’ questions, as well as officials from the Committee to Reform the State Constitution, the League of Women Voters, the New York Public interest Research Group and other good-government organizations.

Current and former commissioners, the state inspector general were invited to participate.

The extra time may allow for witnesses to attend who were unavailable for Monday’s scheduled hearing, Biaggi said, or the Assembly to conduct a joint legislative hearing.

“The issue of JCOPE and how they operate is obviously one of central importance to the people of New York,” Biaggi said. “It’s really important we get this right now in a year where we’ve had a lot of ethics violations and issues that need to be delved deeper into.

“What is JCOPE’s job? Who do you serve? How can we make JCOPE stronger?”

Much of the criticism lobbed at JCOPE — which investigates violations of civil statutes — in recent years has been connected to Gov. Cuomo, who remains under investigation at multiple levels of government for several scandals, including allegations of sexual harassment and misconduct by multiple women, his administration’s alleged underreporting of COVID-19 deaths in state congregate facilities, potentially using state resources to publish his $5.1 million pandemic memoir, the safety of the Gov. Mario Cuomo bridge and if the governor gave priority COVID-19 testing to close relatives or allies early in the pandemic.

Biaggi intends to ask Berland at the hearing how the deal for Gov. Cuomo’s $5.1 million pandemic memoir was approved and to understand the scope of the public entity’s timeline for investigations.

“This is something that, in theory, makes sense, but in practical effect, it’s been a disaster,” Palumbo said. “Unfortunately we have not seen the actual product of JCOPE come to fruition.”

Finance Committee Chair Sen. Liz Krueger, D-Manhattan, has proposed a constitutional amendment to create a new ethics commission with half Republican, half Democrat and other independent appointees.

The Democratic-led Senate approved Biaggi’s bill May 25 to strengthen JCOPE and remove seemingly partisan advantages in appointing people to the commission. The bill, which had no companion in the Assembly, would also change voting requirements and make it easier for the embattled board, criticized for being too closely tied to the governor, to launch investigations.

In 2019, commissioners and staff at the ethics panel flatly denied leaking information about a closed-door vote related to a disgraced former Cuomo aide.

Some members of the panel raised concerns this spring over the approval granted to the governor to write a book mid-pandemic, which was done without the full board being told.