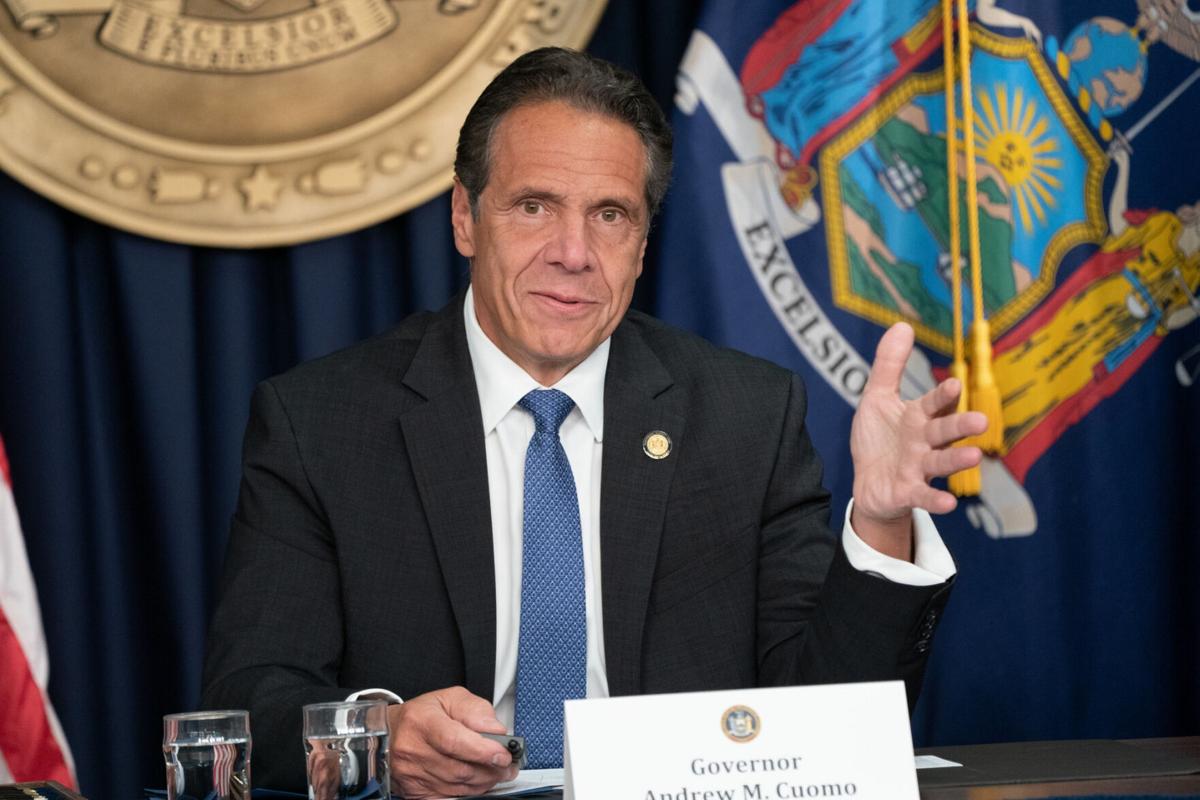 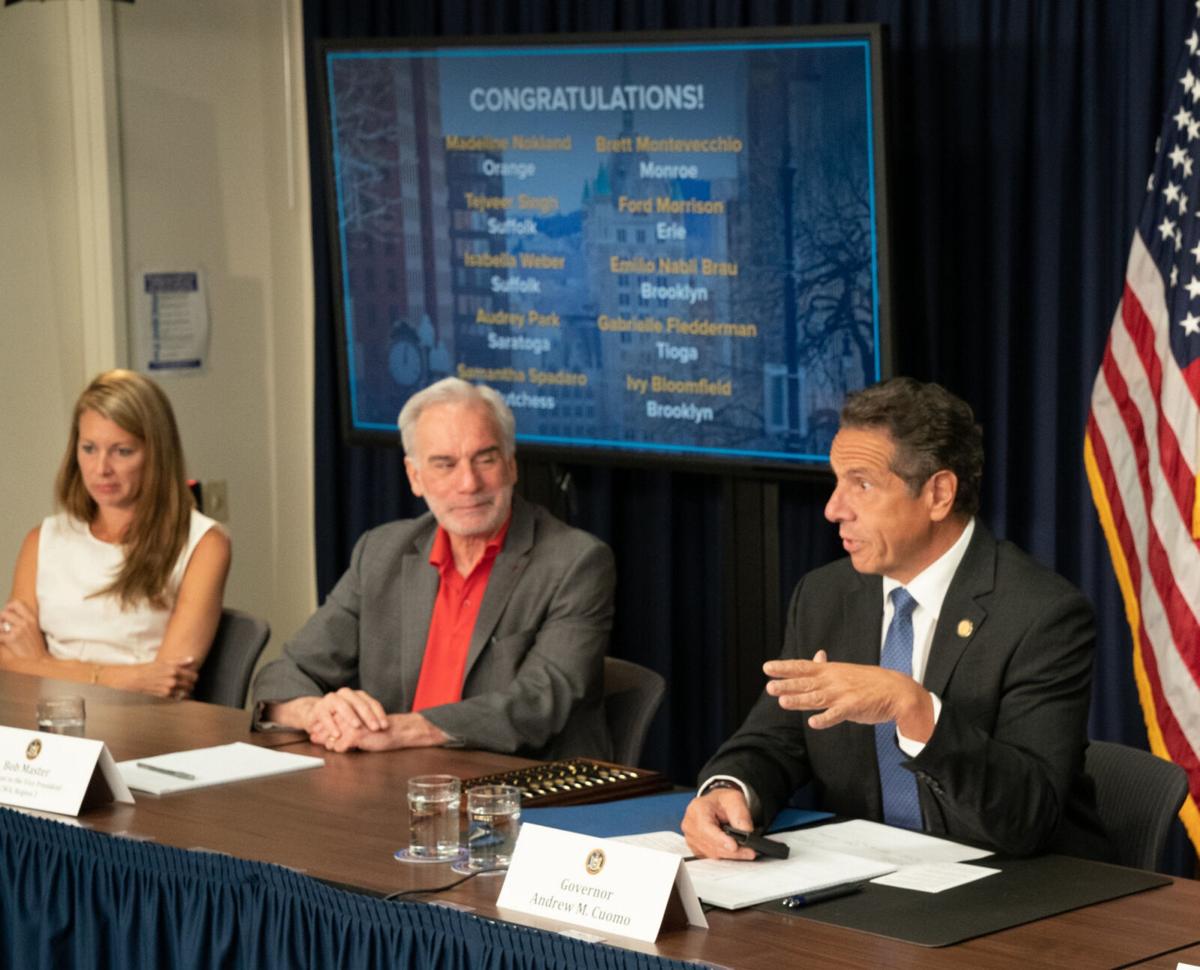 Gov. Andrew Cuomo speaks Wednesday during a COVID-19 briefing in his Manhattan office to announce the prolonged pandemic-related state of emergency will end this week. Courtesy of Gov. Andrew Cuomo's Office

Gov. Andrew Cuomo speaks Wednesday during a COVID-19 briefing in his Manhattan office to announce the prolonged pandemic-related state of emergency will end this week. Courtesy of Gov. Andrew Cuomo's Office

NEW YORK — New York’s state of emergency related to the COVID-19 pandemic will end this week, Gov. Andrew Cuomo said, after remaining in effect for more than 15 months.

The state of emergency will expire after Thursday.

“It will not be renewed, it will punctuate the expiration of the emergency we have been in,” Cuomo said Wednesday during a briefing in Manhattan.

Most of the state’s pandemic-related restrictions were lifted June 15 after 70% of state adults received at least one dose of a COVID-19 vaccine, but the state of emergency remained intact. Officials in the executive chamber would not answer when it would be lifted.

Masks or facial coverings continue to be required for unvaccinated New Yorkers, or people on public transportation, in health care, correctional facilities, nursing homes or congregate settings and homeless shelters.

The state will continue to follow the U.S. Center Disease Control and Prevention’s COVID guidelines, which recommend children in schools and at summer camps wear face masks indoors.

The end of the state of emergency terminates all pandemic-era executive orders, including alcohol-to-go, or the temporary privilege that allowed New Yorkers to order alcoholic beverages from establishments to go or be delivered.

Alcohol-to-go will end after Friday, according to a tweet from the state Liquor Authority on Wednesday afternoon.

Melissa Fleischut, president and CEO of the state’s Restaurant Association, criticized the sudden ending of to-go alcoholic beverages in a statement Wednesday. Lawmakers floated legislation this session to permanently legalize the temporary executive mandate, but did not vote to pass the measure.

“A permanent extension of alcohol-to-go is supported by 78% of New Yorkers, but the Legislature failed to extend it and now the executive order has ended,” Fleischut said. “Only in New York would elected officials ignore an overwhelming majority of the public. Restaurants are struggling to find staff, keep up with rising costs and manage a limited supply of goods and nearly two-thirds of the applicants will not receive [federal] Restaurant Relief funds. New York state must do more to help, not hurt, our restaurant industry.”

Republican lawmakers on June 7 called on their colleagues and legislative leaders to vote to terminate New York’s state of emergency and return the state to pre-pandemic government operations before session ended June 10. Lawmakers did not take the issue up for debate or a vote.

“Today’s news that the New York governor’s emergency executive powers will finally be lifted is long overdue news,” Senate Minority Leader Rob Ortt, R-North Tonawanda, said in a statement Wednesday. “The progress we’ve made wouldn’t have been possible without thousands of frontline workers, business owners and everyday New Yorkers who sacrificed so much over the past year.

“Now it is time for us to turn our undivided attention to the economic recovery and the rising crime wave devastating major metro areas all across the state. As elected officials, we must lead by example. Government officials should finally resume normal operations including making themselves available to the public and press.

“We must do better to restore trust in our government, and that begins by making ourselves more accessible and accountable as state leaders.”

The Legislature unanimously voted in early March 2020 to grant Cuomo expanded spending and decision-making authority under the pandemic-related state of emergency. At the time, lawmakers and officials did not know how long the state of emergency would remain in effect, or how long it would be necessary to conduct legislative session remotely.

“Unfortunately, when Democrats in Albany had an opportunity and responsibility to return checks and balances back to state government and return control and authority back to local municipalities and school districts, they didn’t act,” Assembly Minority Leader Will Barclay, R-Pulaski, said in a statement Wednesday. “For more than 15 months, 19.5 million people have been operating under executive orders, arbitrary restrictions and emergency declarations. Tomorrow, it finally ends. New Yorkers can now, at long last, return to their daily routines and a sense of normalcy. It is time to move forward.”

Senators in the minority conference have pushed a hostile amendment to rescind Cuomo’s expanded pandemic authority 47 times since last summer.

Both houses of state Legislature, controlled by a supermajority of Democrats, amended the governor’s powers March 5, but did not rescind the additional executive authority.

“No numbers today — we have reached a new plateau that should give us all confidence and success,” the governor said. “It’s a long time coming, [and] a product of our efforts.”

The state’s coronavirus infection rate Wednesday was one of the nation’s lowest at 0.34%, or 0.36% over a seven-day average — a continuing decline from 0.40% one week ago.

New virus cases in the state are highest in the North Country at 0.58%. Western New York has the state’s lowest virus infection rate at 0.25%.

The Capital and Finger Lakes regions each have an infection rate fluctuating around 0.45%.

Get the most out of your Bourbon Trail visit in Bardstown, Kentucky