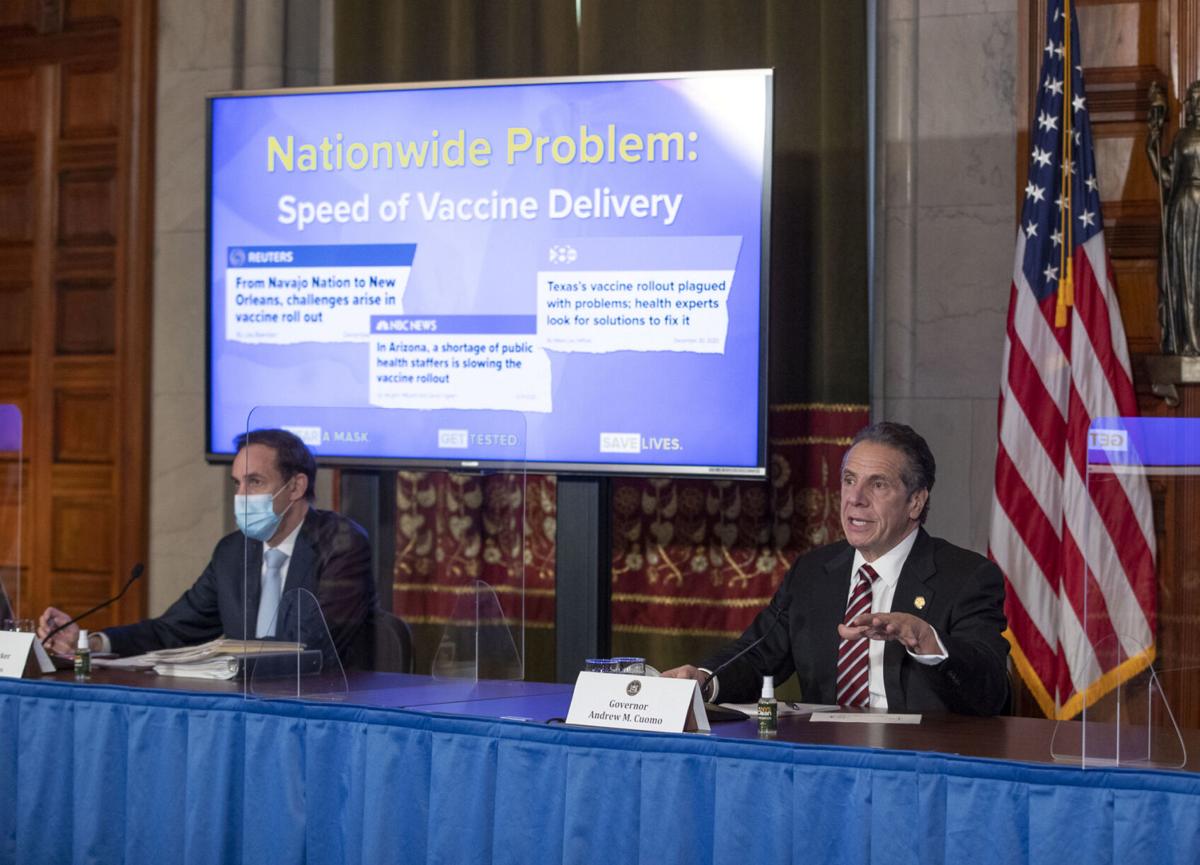 Gov. Andrew Cuomo, right, speaks during a COVID-19 vaccine in the state Capitol in Albany on Monday about the nationwide issue of speedy coronavirus vaccine delivery and administration. Courtesy of Gov. Andrew Cuomo’s Office 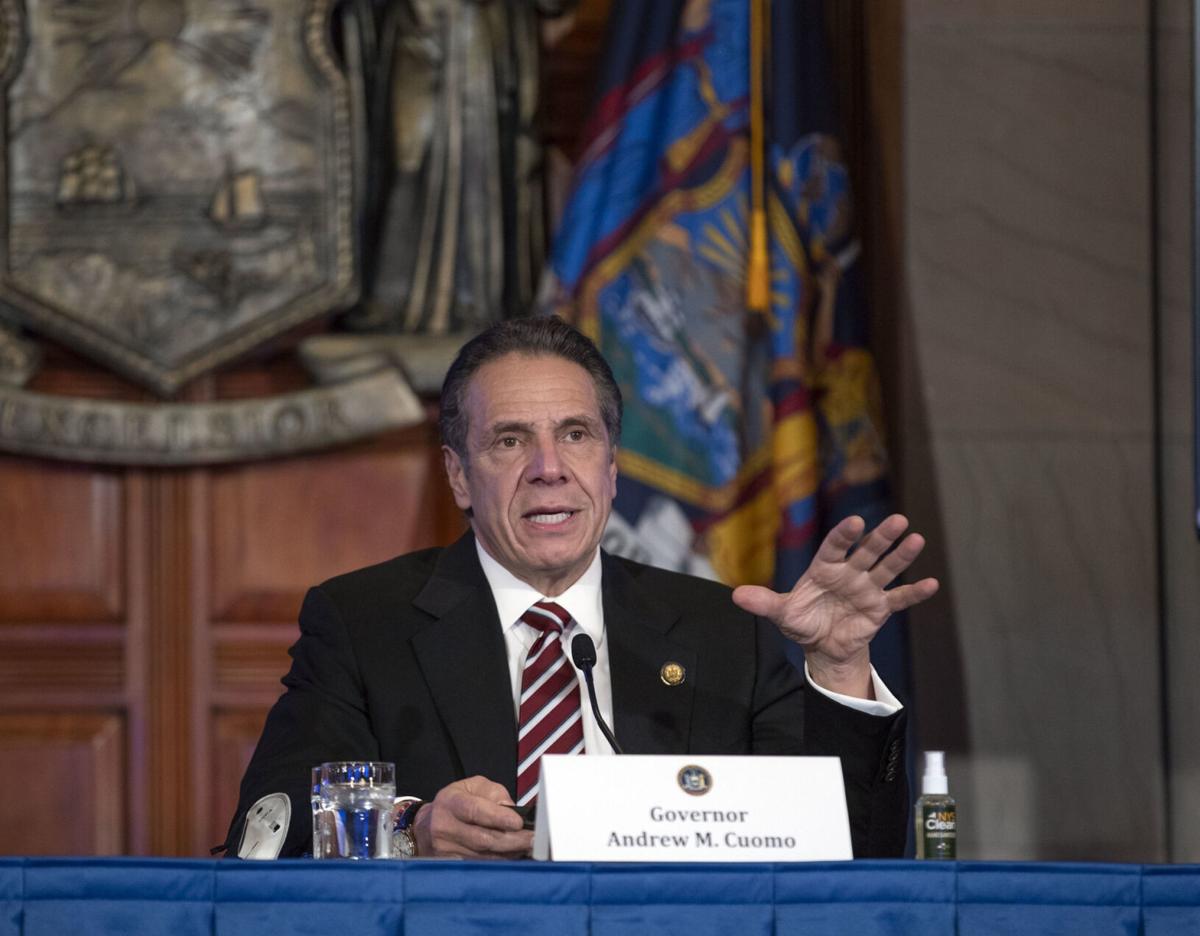 Gov. Andrew Cuomo, right, speaks during a COVID-19 vaccine in the state Capitol in Albany on Monday about the nationwide issue of speedy coronavirus vaccine delivery and administration. Courtesy of Gov. Andrew Cuomo’s Office

ALBANY — State hospitals could be fined up to $100,000 for not administering the first dose of the COVID-19 vaccine to eligible New Yorkers quickly enough, Gov. Andrew Cuomo said Monday, as most New York medical facilities have distributed less than half of their state-allocated vaccine dosages.

The state’s 194 hospitals, including 24 public and 170 private institutions, have vaccinated New Yorkers at various rates.

Cuomo released a list of 20 hospitals Monday — 10 administering the vaccine the fastest, and the 10 slowest.

“I don’t mean to embarrass any hospital, but I want them to be held accountable,” Cuomo said Monday during a coronavirus briefing in the state Capitol. “We need them to administer the vaccines faster. It’s not just the function of size, it’s a function of administrative capacity. We want those vaccines in people’s arms. I need those public officials to step in and manage those systems. You have the allocation. We want it in peoples’ arms as soon as possible.”

About 46% of statewide hospitals, or less than half, have used their allocated vaccine dosages as of Monday afternoon — three weeks after the state’s first administered injection.

State hospitals must administer their vaccine inventory this week or face up to a $100,000 fine, according to a new directive from the state Health Department.

Facilities must use all vaccine doses within one week of receipt going forward, otherwise, a provider could be disqualified from distributing future vaccines. State Health Department Commissioner Dr. Howard Zucker issued a letter to all eligible vaccine providers detailing the new requirements.

“We’ll use other hospitals who can administer it better,” Cuomo said. “This is a very serious public health issue. Zucker is very firm about making sure the hospitals step up. ...We have almost 200 hospitals. If one hospital isn’t performing, we can use the other hospitals.”

The lowest-performing hospital systems include Samaritan Hospital in Troy at 15%. Oneonta’s A.O. Fox Hospital and Nassau University Medical Center are neck-and-neck at 18% and 19% administered vaccinations, respectively.

Nuvance Health in Kingston has administered a quarter of its allocated vaccines, with 25% each at United Health Services Hospitals Inc. in Binghamton and Rochester Regional Health System.

New York City’s public Health + Hospitals system, which oversees 11 facilities, is closing in on administering one-third of allocated vaccines at 31%.

Hospital vaccination speeds depend on a variety of factors, the governor said, including size, staffing and more.

“There is not just one cause,” said Cuomo, adding officials who oversee public health centers must step in and manage an effective vaccine rollout.

Health care workers have generally accepted receiving a COVID-19 vaccine. About 10% of nursing home residents and 15% of staff have refused to be inoculated for the virus.

New York-Presbyterian Healthcare System and Oswego Hospital at SUNY Oswego have administered 99% of its allocated vaccine doses, with 93% at Richmond University Medical Center, 87% administered at Adirondack Medical Center in Lake Placid, 77% from Finger Lakes Health and between 62% and 68% at the university of Rochester Medical Center, Ellis Hospital based in Schenectady and downstate’s Northwell Health system.

“I think part of it is the sense of urgency,” Health Department Commissioner Dr. Howard Zucker said Monday. “Hospitals sitting at 99% — there’s a sense of urgency to move things forward.”

More than 300,000 New Yorkers have received their first injection of Pfizer’s or Moderna’s approved COVID-19 vaccine since the immunization first became available to high-risk health care workers three weeks ago. The state distributed tens of thousands of doses to hospitals in each region based on the area’s number of high-risk health workers and population.

The state will set up temporary drive-thru vaccine sites at convention centers and field hospitals to administer COVID-19 vaccinations to the public in minority and low-income communities. Additionally, retired medical personnel, such as nurses, doctors and pharmacists will work at the facilities when more vaccines become available for the general public in the coming months.

Cuomo is ready and willing to get the coronavirus vaccine, he said, but will wait to receive a dose when his age group is eligible and not take a dose from a higher priority health care worker.

The state follows federal Centers for Disease Control and Prevention guidelines to determine which New Yorkers are able to get vaccinated first. The prioritization was expanded Monday to include all doctors, nurses and health staff who come in contact with the public.

Cuomo declared an executive order Monday requiring that any health agency found to fraudulently offer vaccines to lose their state licenses. The governor will propose legislation to the Legislature to make it a criminal offense.

“The vaccine can be like gold to some people,” Cuomo said. “If there’s any fraud in the distribution, you’ll lose a license, but I do believe it should be criminal.”

The state has 2.1 million high-risk doctors, nurses, pharmacists and medical personnel who directly work with the public or come into direct contact with virus patients.

The state’s COVID-19 infection rate without microcluster zones was 7.78% Monday — slightly down from more than 8% positive for most of last week, Cuomo said during his first COVID-19 update of 2021. The governor has returned to his thrice-weekly Monday, Wednesday, Friday coronavirus briefing schedule, with updates expected to begin at 11:30 a.m.

New virus cases continue to climb in the Finger Lakes and Mohawk Valley regions at a seven-day average of 10.22 and 10.38%, respectively, up from more than 8% last week. New infections have spiked to 9.91% in the Capital Region and 9.02% in the North Country, with 8.43% positive in Western New York.

Cuomo encouraged public school districts in counties and regions with COVID infections above 9% to test the required percentage of students, faculty and staff. Schools that test below the community’s positivity rate can remain open for in-person classroom instruction.

“If the children are safer in the school than they are on the streets of the community, then children should be in school,” Cuomo said. “We’re testing in the schools, so we know the positivity rate in the schools. If the schools are safer, then my opinion is leave the schools up, but that will be up to the school districts across the state.”

“That is a terrible way to start the new year,” Cuomo said of the elevated daily virus fatalities.

State Coronavirus Task Force members communicate with hospital administrators each day to ensure no facility becomes overwhelmed with patients. Hospitalizations continue to increase statewide with virus infections, but as of Monday, all regions have more than 30% available hospital bed capacity.

“Right now, no region is above 30%, but they’re all hovering in that range,” Cuomo said. “The North Country, obviously, has more availability.”

An area will shut down, or all nonessential businesses will be mandated closed, when a hospital is within three weeks of hitting 90% occupied.

“That’s the last thing anybody wants,” Cuomo added of forced shutdowns. “If you don’t want that, then don’t bemoan reality. Do something about it and do something smart and reduce the infection rate.”

Hospital capacity hovered at 31% in the Finger Lakes and at more than 32% in the surging Mohawk Valley and Capital Region on Monday. North Country hospitals have 58.5% of staffed acute beds available — the most in the state.

The Finger Lakes region persists in having the highest number of New Yorkers hospitalized with the disease at 930 people, or a rising 0.08% of the region’s population.

“This is not a fluke, this has been going on for weeks,” Cuomo said. “Finger Lakes, they have to take it seriously. It’s a function of that person’s behavior. If you’re in those areas of the state, take it seriously.”

Hospitalizations also continue to surge in the Capital Region with 468 virus patients at 0.04% of the population. Western New York also has 0.04% of its population in the hospital with virus complications at 531 people. North Country virus hospitalizations have remained about flat at 0.02% or 82 patients.

Virus infections have spiked over the nearly six-week holiday season from Thanksgiving through New Year’s Day.

About 900 New Yorkers enter state hospitals with COVID complications per day over a one-week average since Dec. 27 — up about 100 people in the last week from about 700 daily virus admissions since Thanksgiving, or Nov. 26.

The governor will deliver the State of the State address differently this year because of the ongoing pandemic. Cuomo’s annual speech will be delivered virtually starting Jan. 11, he said, but suggested the event will take place over a series of days.

The governor is expected to release more details this week about the address, which will reveal plans for the state’s budget crisis with a $15 billion revenue shortfall this year, mounting to more than $31 billion in two years.