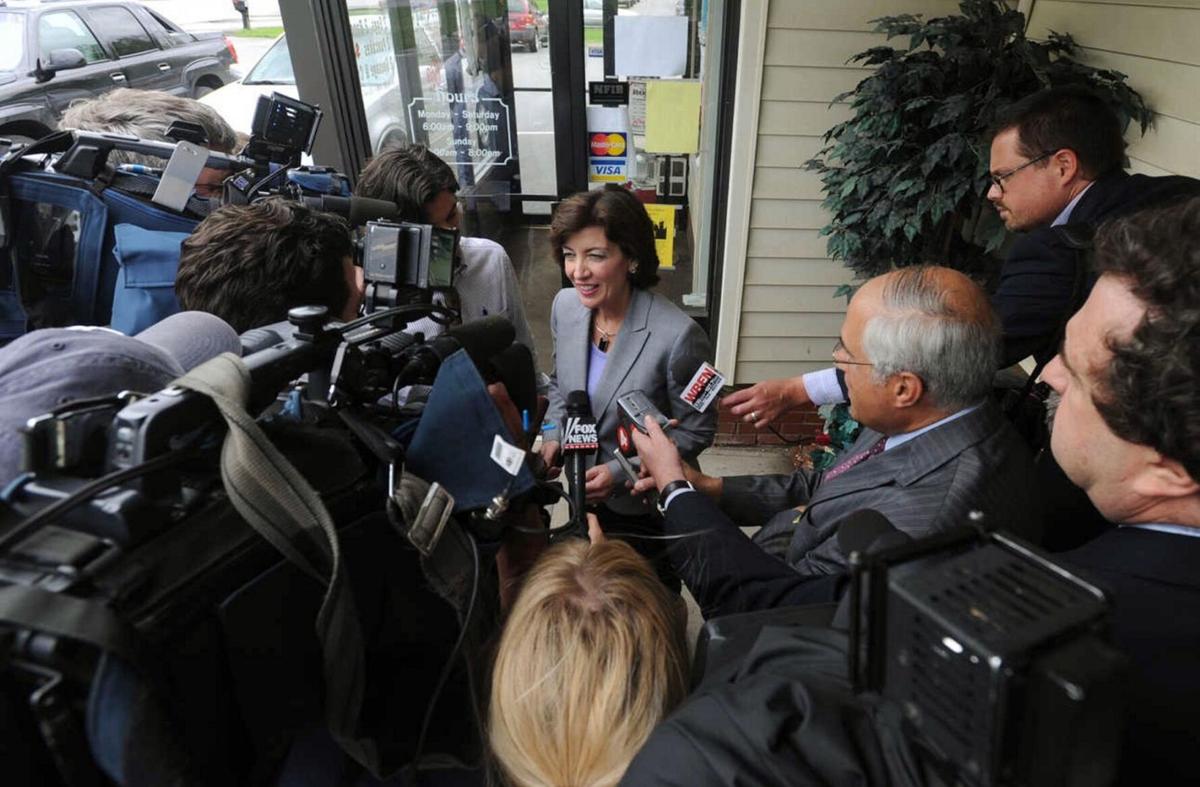 Kathy Hochul will take office next week as New York’s governor. Officials throughout the GLOW region describe her as caring and genuine. 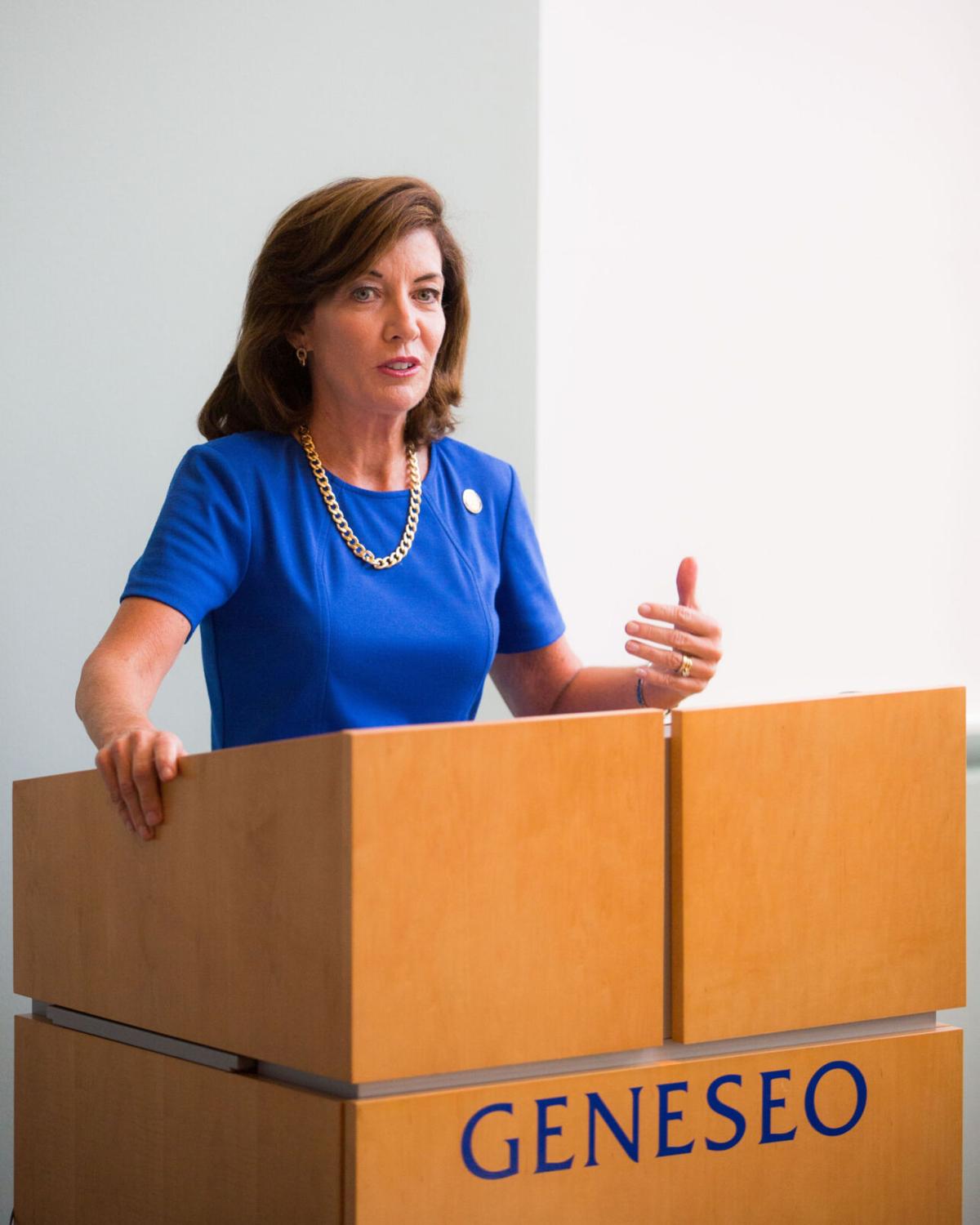 New York Lt. Gov. Kathy Hochul addresses students during a program at SUNY Geneseo. She spoke about the state’s Enough is Enough legislation, which encourage students to report instances of sexual assault by granting immunity for things such as drug and alcohol use. 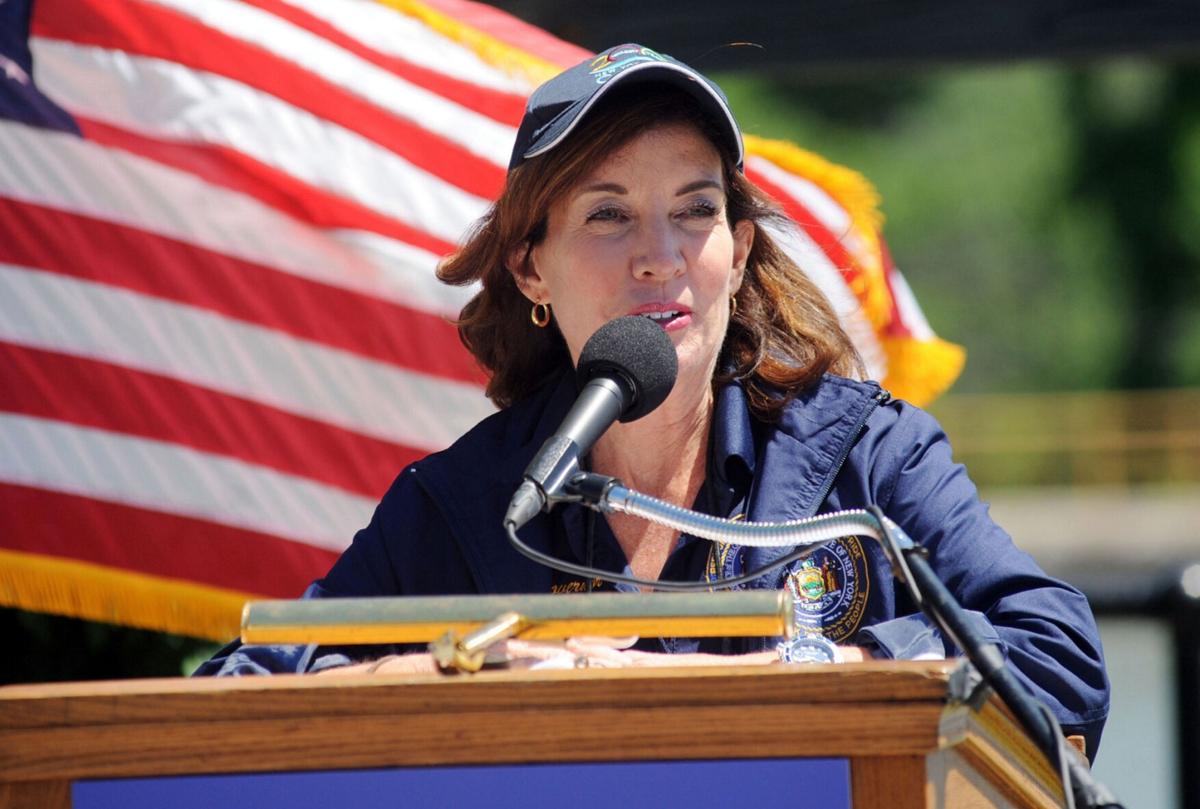 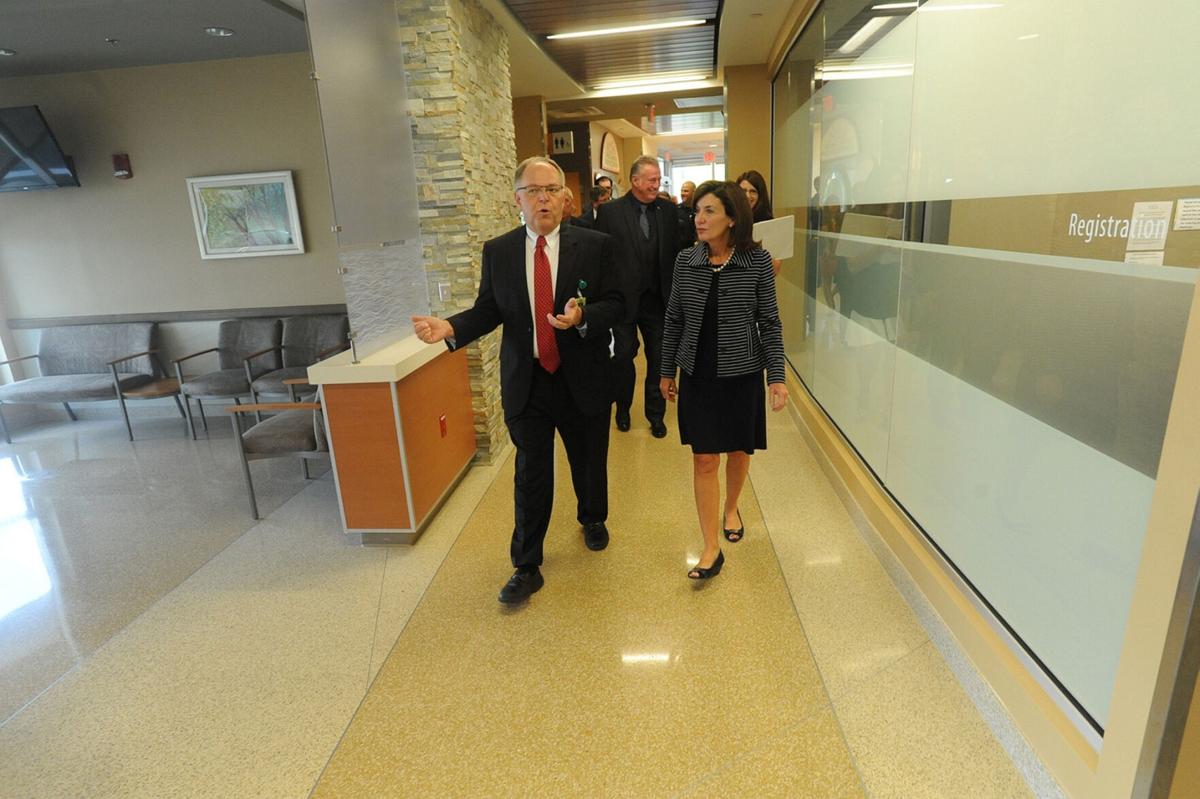 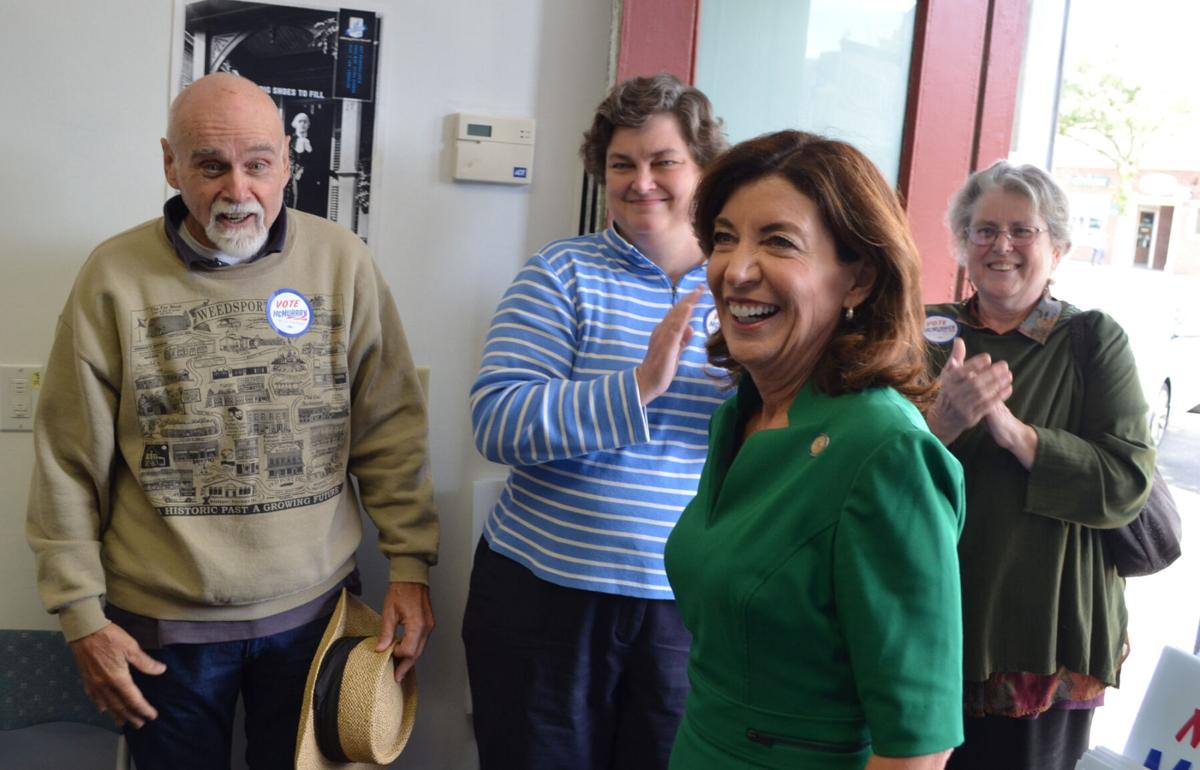 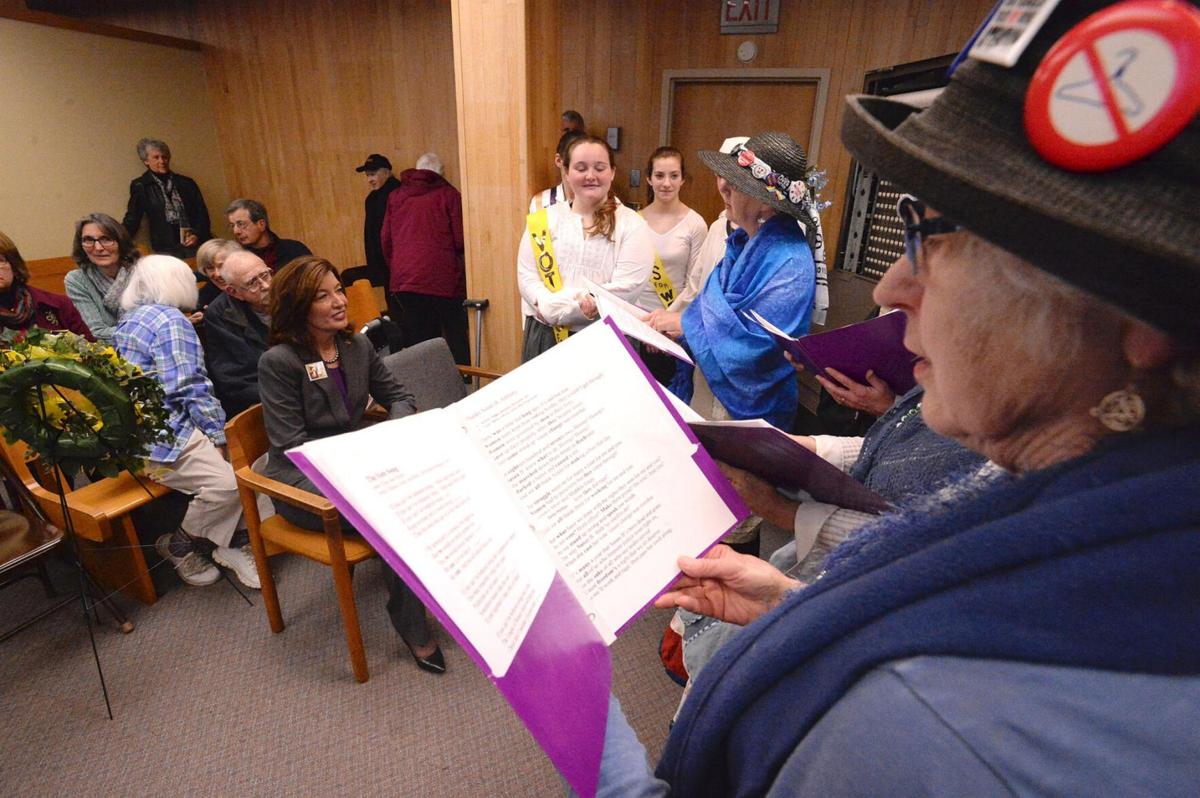 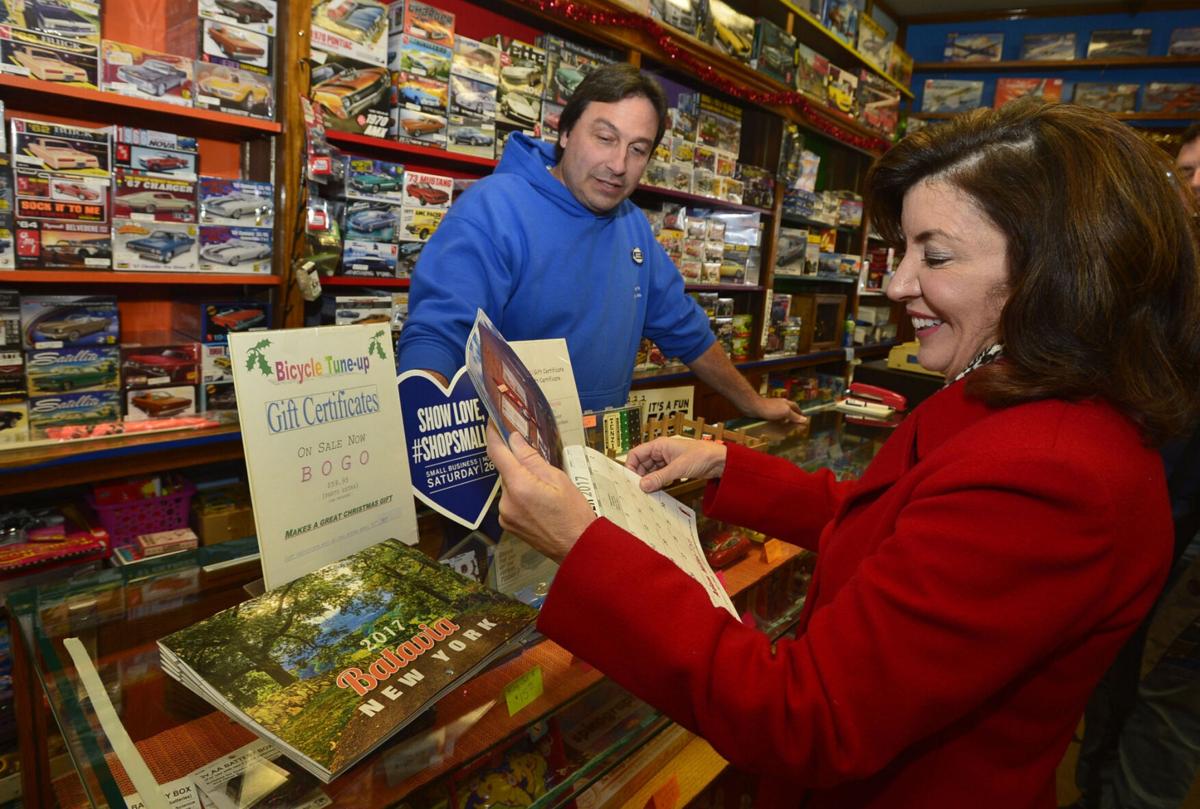 Kathy Hochul shops at Adam Miller’s during Small Business Saturday in 2016. Owner John Roche is behind the counter. 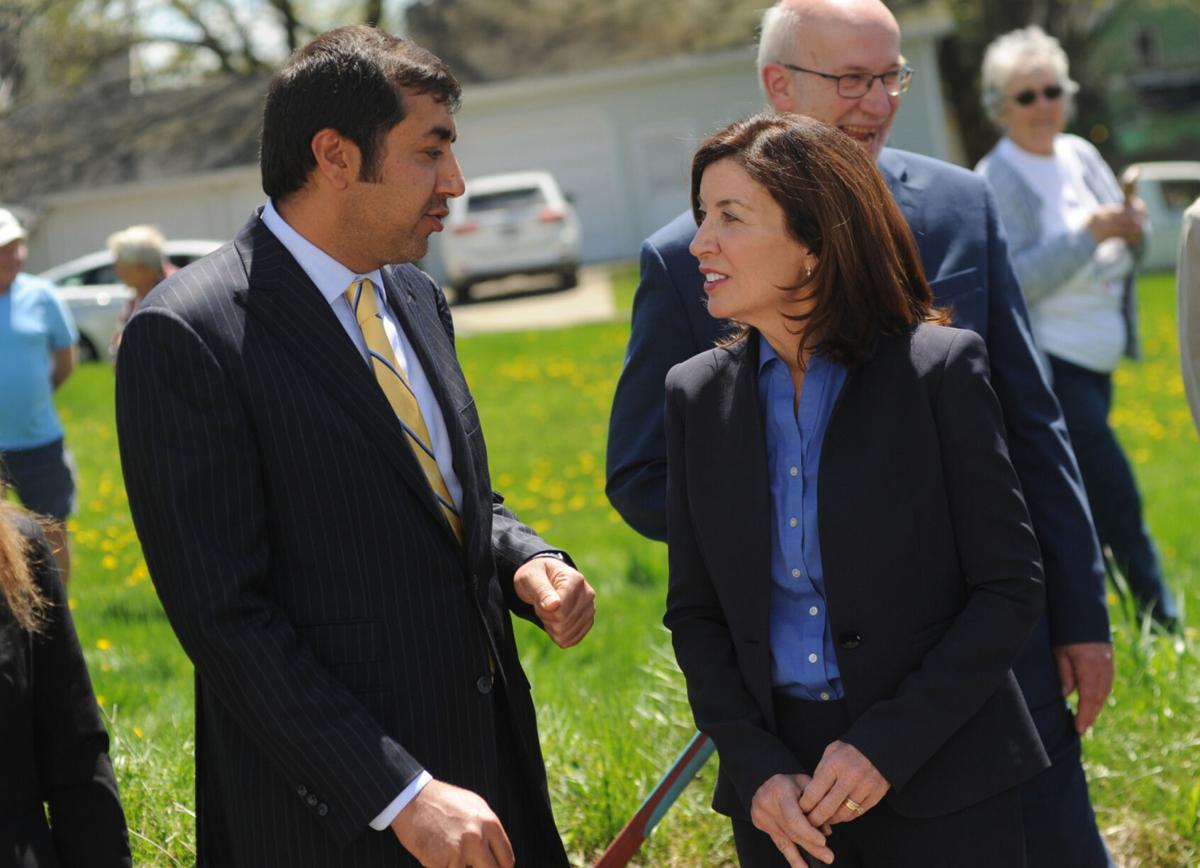 Jett Mehta of the Indus Hospitality Group and Lt. Gov. Kathy Hochul speak together at the Manor Oak nursing facility demolition ceremony on May 7, 2019 in Warsaw. 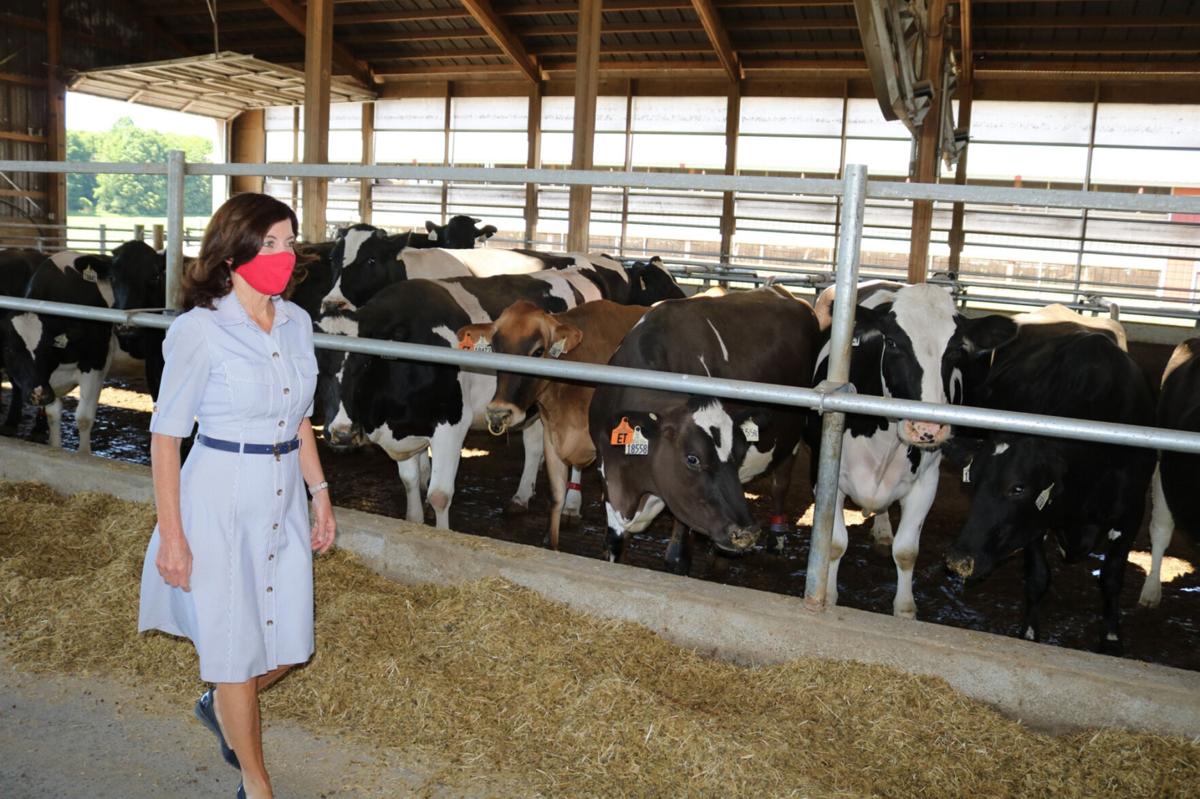 Lt. Gov. Kathy Hochul stopped by Noblehurst Farms and Craigs Station Creamery on June 17, 2020, to voice her support of the Nourish New York program. The statewide initiative was formed during the COVID-19 pandemic to link farmers to the families and food producers who use their products.

Kathy Hochul will take office next week as New York’s governor. Officials throughout the GLOW region describe her as caring and genuine.

New York Lt. Gov. Kathy Hochul addresses students during a program at SUNY Geneseo. She spoke about the state’s Enough is Enough legislation, which encourage students to report instances of sexual assault by granting immunity for things such as drug and alcohol use.

Kathy Hochul shops at Adam Miller’s during Small Business Saturday in 2016. Owner John Roche is behind the counter.

Jett Mehta of the Indus Hospitality Group and Lt. Gov. Kathy Hochul speak together at the Manor Oak nursing facility demolition ceremony on May 7, 2019 in Warsaw.

Lt. Gov. Kathy Hochul stopped by Noblehurst Farms and Craigs Station Creamery on June 17, 2020, to voice her support of the Nourish New York program. The statewide initiative was formed during the COVID-19 pandemic to link farmers to the families and food producers who use their products.

Lorie Longhany and her family were at their cottage on Silver Lake on July 3 a few years back when she received a phone call.

“She knew we had a little place over there,” recalled Longhany, Genesee County’s Democratic election commissioner. “She said, ‘Do you mind if Kathy and Bill stop over and visit with you?’”

Later that afternoon, the Hochuls came over to the cottage.

“I was honored to have her call and ask to have a picnic with us,” Longhany said. “They interacted with everybody on our street and visited with everybody, but it was non-political. It was very personal — a nice way for them to interact — have a hot dog, visit, enjoy the lake.”

Hochul has a strong following in the GLOW region, despite being a Democrat in a Republican stronghold.

Hochul will become the state’s first female governor at 12:01 a.m. Tuesday in a private swearing-in in the state Capitol in Albany.

A Buffalo native, Hochul has served at all levels of government throughout her career, including as a congresswoman in the state’s 26th Congressional District from 2011 to 2013, as Erie County clerk and as a member of the Hamburg Town Board from 1994 to 2007.

No person interviewed had one bad thing to say about her.

Longhany first met Hochul in 2011 as Erie County clerk, and said she was impressive, personable and responsive.

“The first thing that I remember was, she always spoke about her mother’s floral shop in Hamburg and how important small businesses were to her,” Longhany said. “She had a concern for the mom-and-pop shops that sometimes get overlooked. It was in her DNA to be responsive to small business owners and their plights.”

Longhany remembers walking around with Hochul to stores in Le Roy and how Hochul went to the Jell-O Gallery Museum.

“We’d go into Java’s and we’d have coffee. She’d meet with the mayor and ask everybody what their concerns were and how she could help.”

In the 10 years since being elected to Congress, Hochul has made a point to make Western New York a focus.

That continued when she became lieutenant governor in 2015.

That year was like any other year for Gov. Cuomo in the GLOW region: He was universally despised.

One only has to check out the reaction of Western New Yorkers when Cuomo announced his resignation.

And while voters are understandably nervous about Hochul, it appears they are giving her a chance.

Hochul’s love of Western New York is evident and is likely to be a political asset, despite her being a Democrat.

Hochul will be the first governor with strong ties to Western New York in more than 150 years, since Myron H. Clark of Naples in 1855 and 1856.

Hochul was born Kathleen Courtney on Aug. 27, 1958 in Buffalo, the second of six children of John and Patricia Courtney.

She graduated from Syracuse University, where she became politically active.

She ran successfully in the 2011 special election to fill the congressional seat left vacant by Chris Lee, but lost a re-election bid the following year to the now disgraced Chris Collins.

Cuomo named her his choice for lieutenant governor in 2014 and easily won office.

This week, she will take office as New York’s first woman governor, one who already has a proven track record in Western New York.

“I think she’s prepared well for this, long before the handwriting was on the wall,” said Lynne Johnson, chairwoman of Orleans County Legislature. “If she succeeds, it would be her un-Cuomo qualities.”

During past stops in the region, Hochul has spoken fondly of her memories of Letchworth State Park and of her frequent trips to drop her son off at SUNY Geneseo.

Hochul’s son, William Hochul III, graduated from SUNY Geneseo a semester early in 2009 with a degree in political science. During an appearance at the college in 2016 to talk up the state’s new Enough is Enough law, which strengthened sexual assault reporting requirements for colleges, Hochul praised the opportunities the college affords its students.

Joseph Robinson and Rebecca Ryan of Warsaw have found Hochul to be genuine.

Robinson is a businessman and the village’s Democratic mayor. Ryan is the Republican town supervisor and has served as chairwoman of the Wyoming County Board of Supervisors since January.

Both have worked with Hochul during her time as congresswoman and her years as lieutenant governor on projects such as replacing the former Manor Oak nursing facility — a longtime village eyesore — and supporting Wyoming County Community Hospital. The latter is Wyoming County’s only hospital and among the county’s largest employers.

“I’m really glad to know Kathy,” Robinson said. “I met her back when she was running her congressional campaign and we became really familiar with her in Warsaw. She has an affinity for Wyoming County and she visits quite a bit. She likes to stop in at the Silver Lake Restaurant and talk with folks there.”

Hochul has been very responsive, Robinson said, noting her 2019 appearance at Manor Oak’s demolition. He said she’s been instrumental in aid for WCCH.

“What I really like about Kathy is she’s a grassroots person,” he said.

Ryan described Hochul as very personable, intelligent and familiar with the county, being a regular visitor to the area.

She also cited Hochul’s support of economic development projects within the county.

“I believe she will be effective if the results of past experiences guide her while she serves as governor,” Ryan said. “She has advocated for Wyoming County and Wyoming County Community Hospital, resulting in urgently needed funding and successfully navigating tangled snags in the bureaucratic processes. I also believe that she can effectively end the toxic work environment that has embroiled our state politics in the past if she adheres to her Western New York ethics and fairness.”

Ryan said Hochul’s best qualities are a knowledge of and appreciation for local life in rural communities, saying she’s always been accessible and a pleasure to work with.

In the past, Hochul’s office has responded to questions quickly, Ryan said, noting that her answers reveal an understanding of how state, federal and local governments impact each other.

“It is my hope that she will carry that understanding and accessibility with her to Albany,” Ryan said. “We look forward to Kathy’s continued support of our county and region as she serves in her new position as governor.”

“She has visited here many, many times during my time. I’m very impressed,” Turnbull said. “A lot of people came through that I wasn’t very impressed with. (Hochul was) very genuine. down-to-earth, a typical Western Mew Yorker.”

“A lot of politicians come through and think they know everything. Kathy, I think, actually listens and being local, she cares about the area,” he said. “Politicians so often don’t take the time to talk to people. When she comes through here, she takes the time to talk to everyone from the top to the bottom.”

Post said Hochul is probably as informed as anyone he’s met on the development and economic opportunities in Genesee County.

“She is extremely able to acknowledge and understand the issues. She responds with great questions and has an extraordinary grasp on local government issues in Upstate New York, in my opinion,” he said.

“Kathy has visited Batavia and Genesee County so many times that she is an honorary resident,” Hyde said. “Her active involvement in our various DRI (Downtown Revitalization Initiative) projects, to visiting our agricultural and food processing businesses – Kathy understands our community and economy, especially our needs in continuing the efforts to create new jobs and career opportunities for our residents.”

Hyde noted that companies considering a new location in the area value how Hochul has spoken about the people and character of the region.

“Kathy has conveyed great enthusiasm and support for the ability of Genesee County and the Buffalo and Rochester metropolitan regions to have the workforce, training, and quality of life for major projects,” Hyde said.