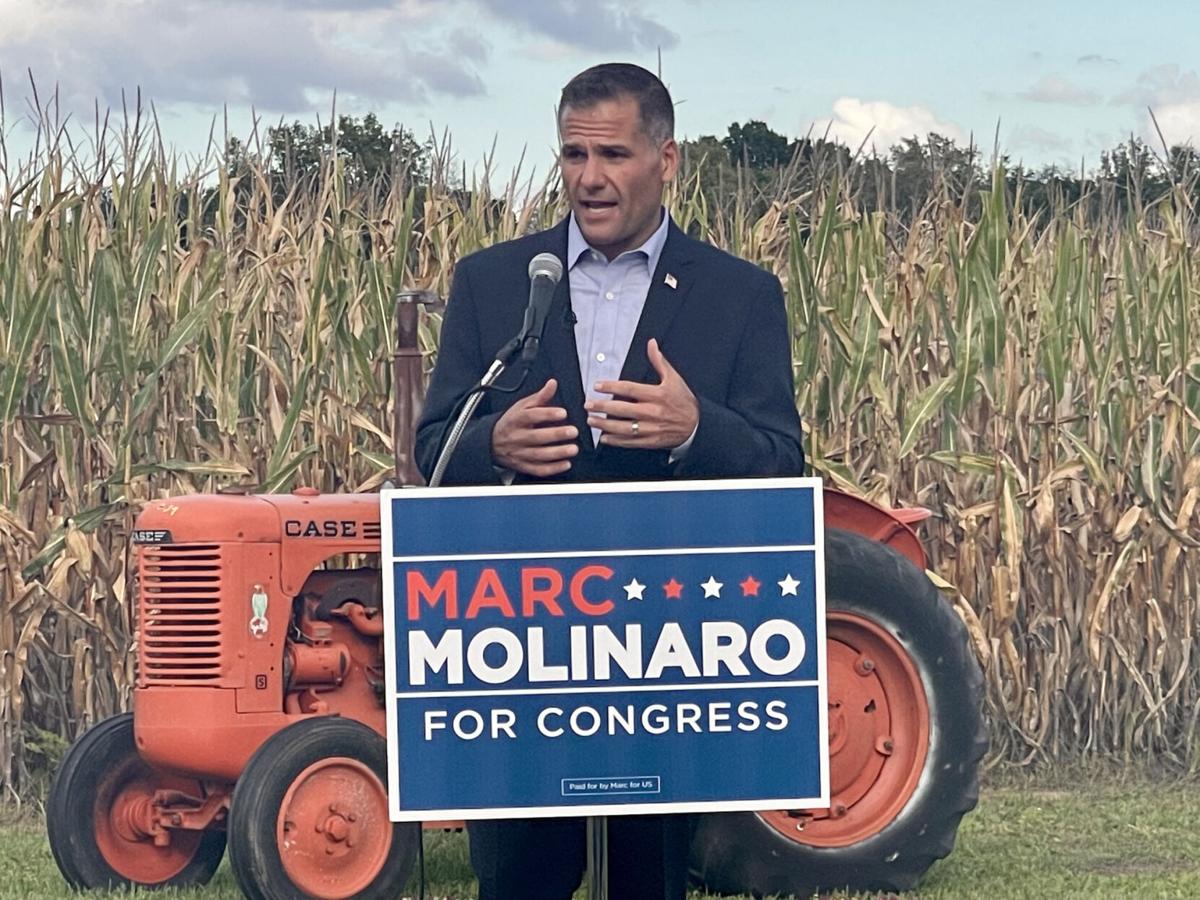 Dutchess County Executive Marc Molinaro gives a speech at Kesicke Farm in Red Hook on Tuesday to kick off his campaign to run for the 19th Congressional District seat against U.S. Rep. Antonio Delgado in November 2022. Kate Lisa/Johnson Newspaper Corp. 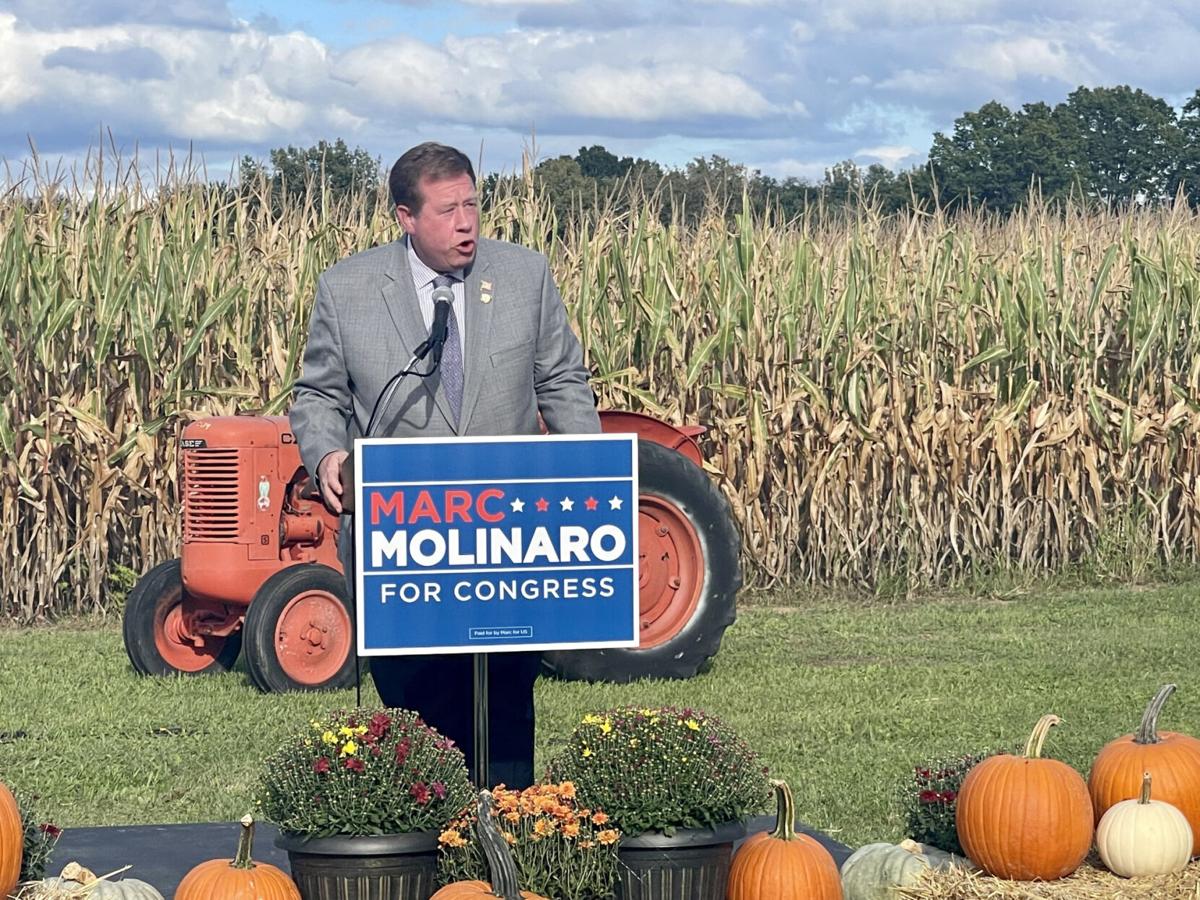 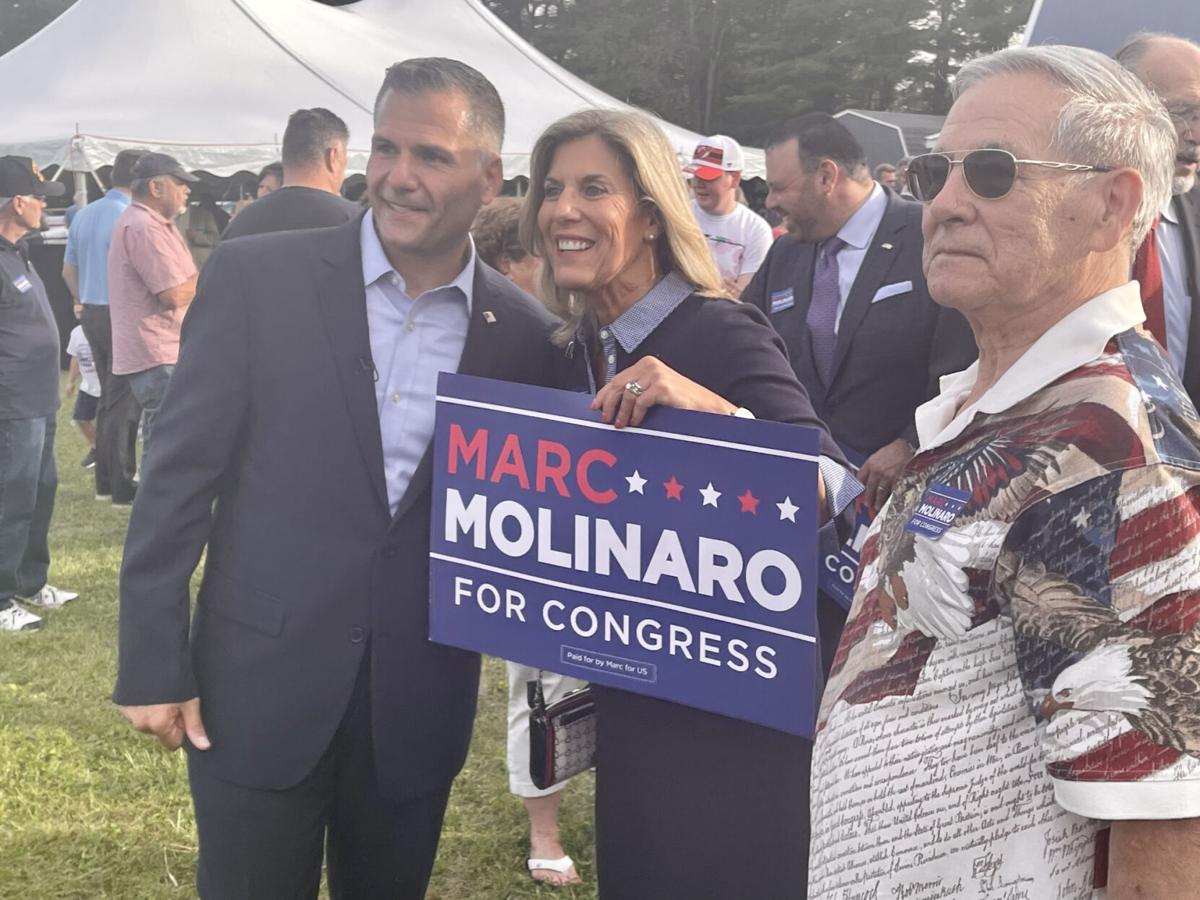 Dutchess County Executive Marc Molinaro gives a speech at Kesicke Farm in Red Hook on Tuesday to kick off his campaign to run for the 19th Congressional District seat against U.S. Rep. Antonio Delgado in November 2022. Kate Lisa/Johnson Newspaper Corp.

RHINEBECK — Standing next to a cornfield and a pen of bleating livestock, Dutchess County Executive Marc Molinaro roused a crowd of Hudson Valley officials and supporters Tuesday promising to make a difference if elected to represent the state’s 19th Congressional District.

Molinaro, who lost his 2018 bid for governor to Andrew Cuomo, formally announced his candidacy at Kesicke Farm in Red Hook late Tuesday to run against U.S. Rep. Antonio Delgado, D-19, in the 2022 election. Molinaro signed and filed a Statement of Candidacy with the Federal Election Commission on Friday.

“America is at a crossroads ... there is a place for me to stand up for you, for us and Congress is that place,” Molinaro said.

Molinaro had previously announced he would not seek re-election as county executive and hinted earlier this year to seek another run for governor in 2022, but said Tuesday that Congress is the place he can make the most difference.

“This is the right place to make a measurable difference in the life of the people of my community — it just is,” he said. “I’ve had a long career of bringing people together for a common purpose and that’s by listening, by being honest and being responsive. It’s what I’ve always done and is why I’m running.”

Molinaro has openly worked with Delgado since Delgado was first elected in 2018, flipping the district blue, and re-elected in 2020.

“I don’t dislike our member of Congress, I don’t, I just don’t think he’s interested in taking up this most historic challenge,” Molinaro said of his opponent. “He’s more interested in mastering the Washington two-step — the dance with the donors, the PACs, the billionaires and the special interests, raising millions of dollars just as Andrew Cuomo did — than engaging in the heavy lifting.

“I don’t believe he sees the breadth of this job, the task at hand - the ability to not only mend fences, but to stand up for overtaxed, overburdened families, farmers and small businesses too often ignored.”

Representatives with Delgado’s campaign noted the congressman’s achievements in bipartisan legislation and securing funding for local governments across the district since he took office.

“As promised, Antonio Delgado has fought for our region day in and day out and achieved meaningful results,” according to a statement from the Delgado for Congress campaign Tuesday night. “He has held 63 town halls and crisscrossed all 11 counties in our upstate district many times over. He has had 12 bills signed into law under Democratic and Republican administrations and secured over $400 million in direct support for our counties, towns and villages. He looks forward to continuing that work every single day.”

“Marc is someone with a proven record of problem-solving and getting things done,” Tague said. “Let me be blunt: We need Marc Molinaro more than ever. For all that’s at stake with this next election ... this is not one we can take lightly or give anything less than all we have to give. The race for this NY-19 seat starts right now and we need to hit the ground running.”

Molinaro, 45, has served in public office since his 1994 election as a village trustee in Tivoli at the age of 18. He became the youngest mayor in the United States the following year, and was re-elected mayor five times.

He was elected four times to the Dutchess County Legislature and was a state assemblyman representing the 103rd District from 2006 to 2012.

“The road to winning back the House majority runs through the Hudson Valley and Marc’s candidacy instantly makes this race one of the top targets in the country,” state Republican Party Chairman Nick Langworthy said in a statement Tuesday. “As county executive, Marc has been a champion for taxpayers while delivering good, honest government to the people of Dutchess. Antonio Delgado has proven himself to be nothing more than a Pelosi puppet who has been silent on everything from Cuomo’s corruption to Biden’s incompetence and that is why voters are going to replace him next November.”

Molinaro’s campaign repeatedly denied the complaints. The Dutchess County Board of Ethics dismissed Molinaro and donors of wrongdoing after the 2018 election.

“Molinaro has shown time and again that his top priority is enriching his donors, not helping the people of Dutchess County,” Dutchess Democratic Committee Chair Elisa Sumner said in a statement Tuesday. “He receives thousands of dollars in donations from companies who have been awarded multi-million dollar county contracts. This is corruption. Plain and simple.”

Molinaro lives in Red Hook with his wife, Corinne, and children Abigail, Jack, Elias and Theo.