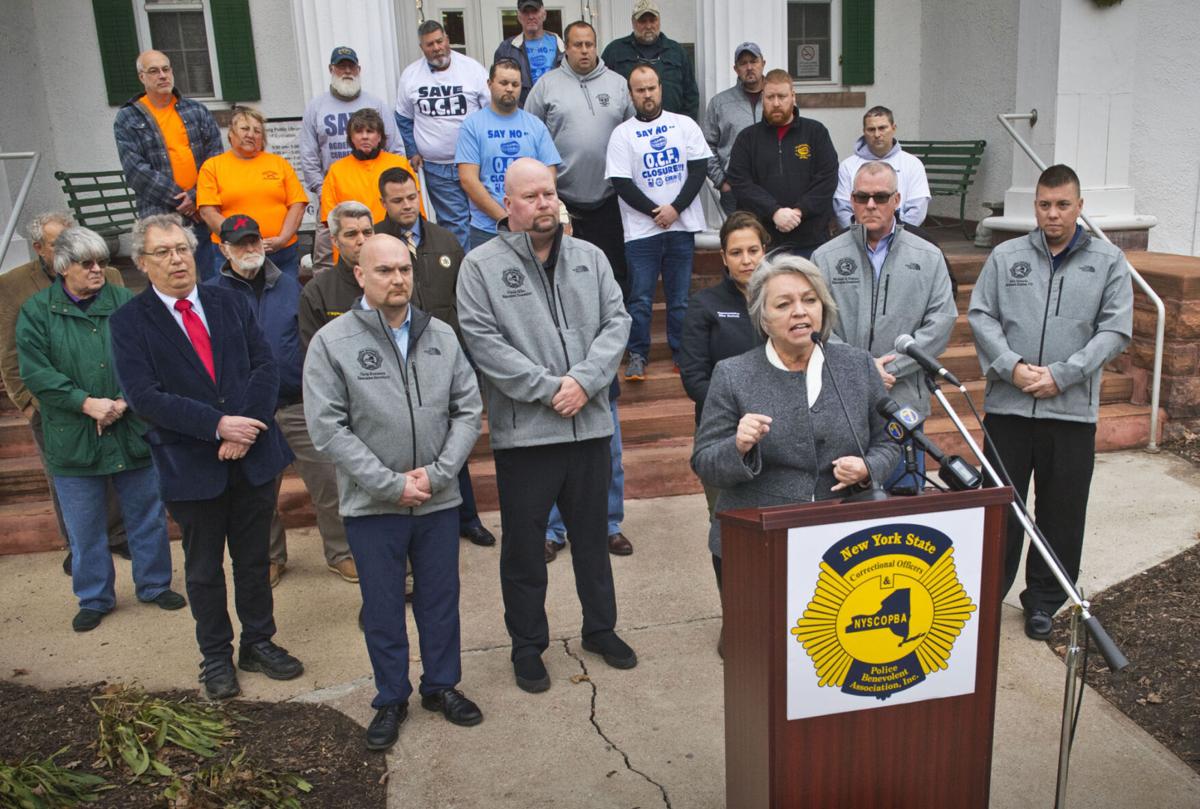 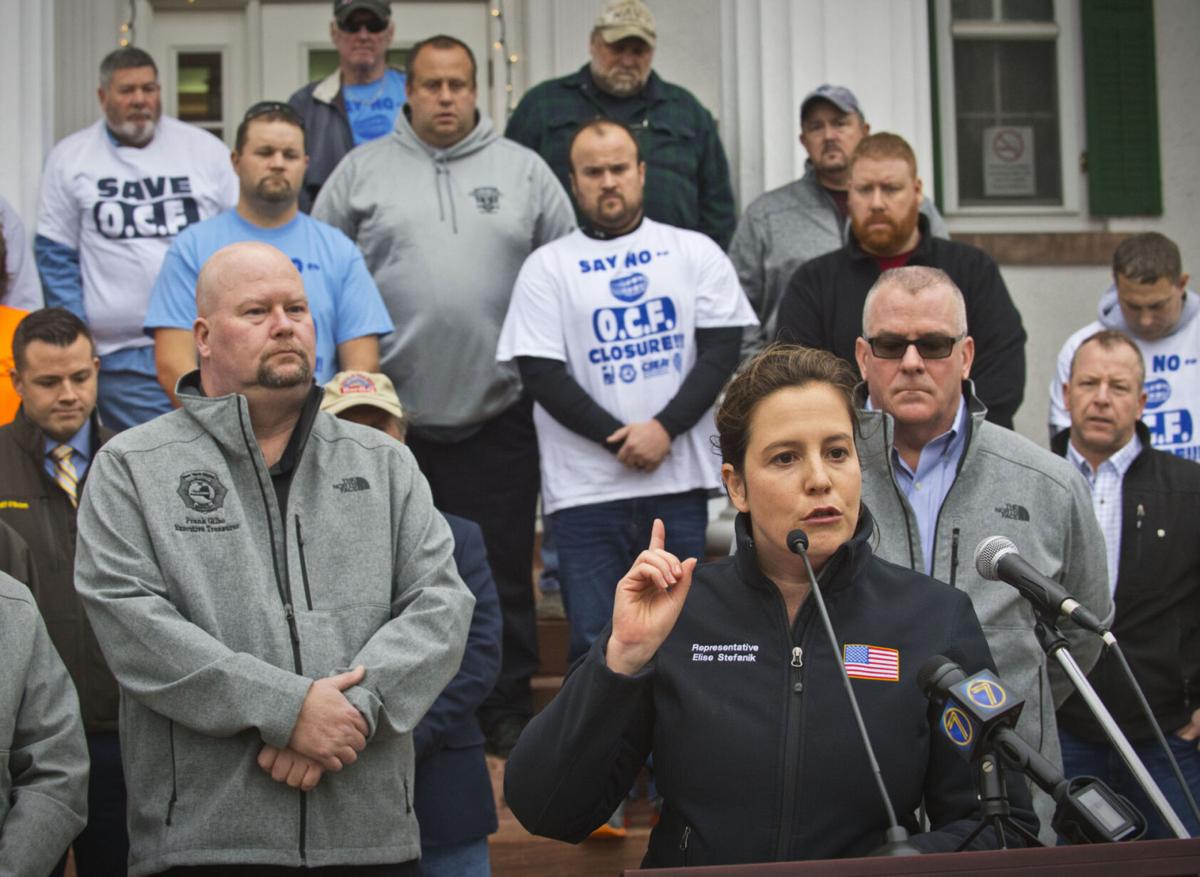 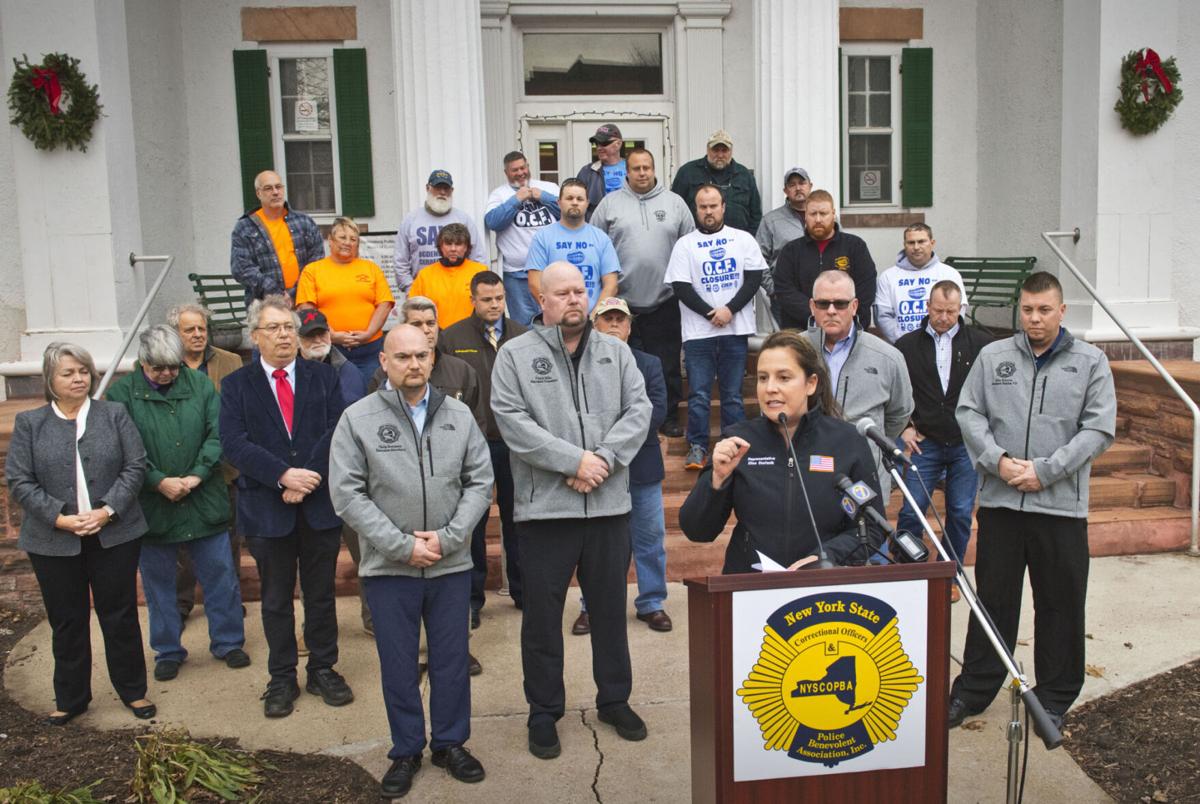 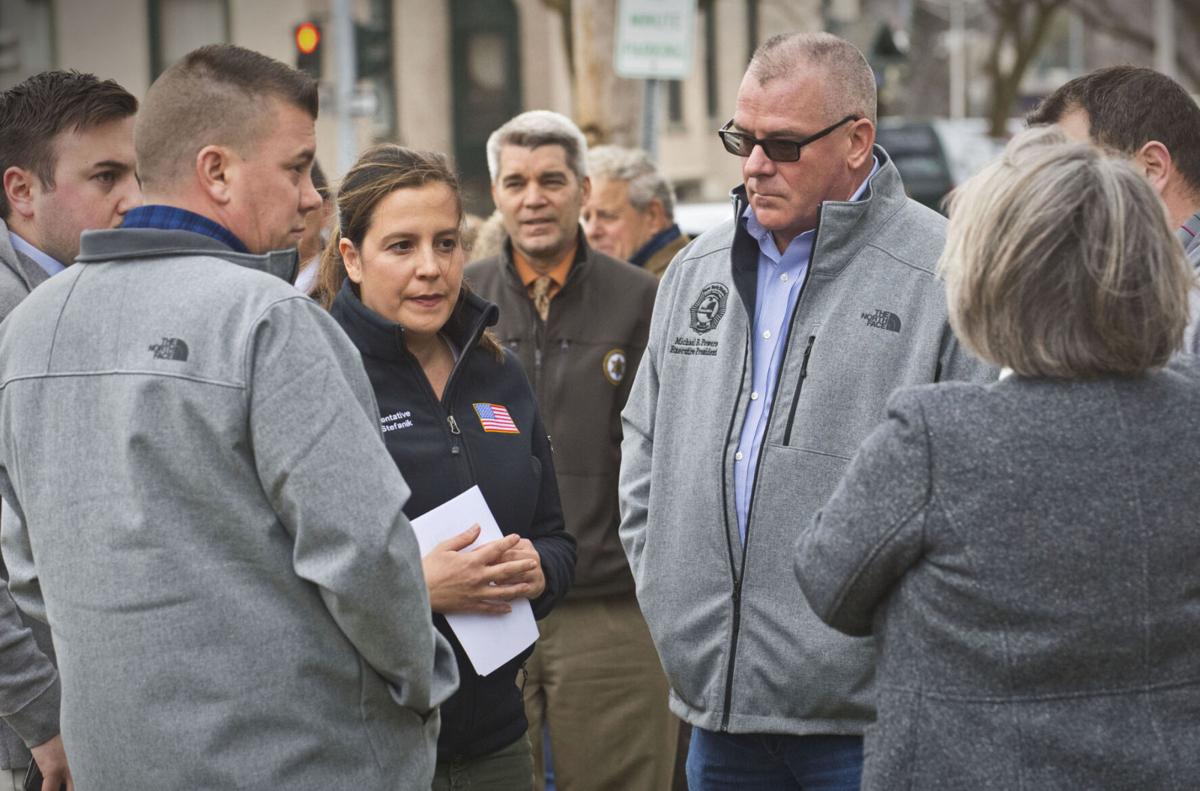 Congresswoman Elise M. Stefanik, left, and State Sen. Patricia A. Ritchie talk with members of the New York State Correctional Officers and Police Benevolent Association on Thursday before the start of a press conference on the steps of the Ogdensburg Public Library. Christopher Lenney/Watertown Daily Times 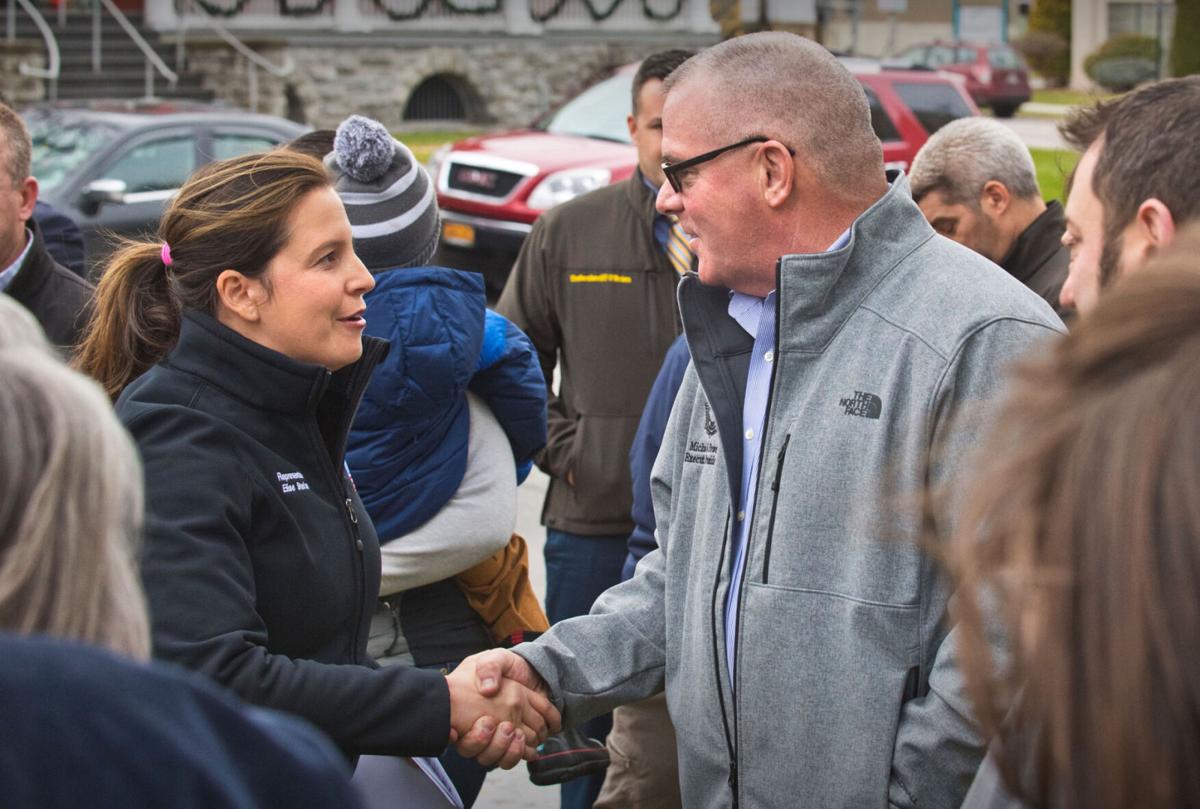 Congresswoman Elise M. Stefanik shakes hands with Michael B. Powers, president of the New York State Correctional Officers and Police Benevolent Association, and an Ogdensburg city councilor, on Thursday before the start of a press conference on the steps of the Ogdensburg Public Library. Christopher Lenney/Watertown Daily Times 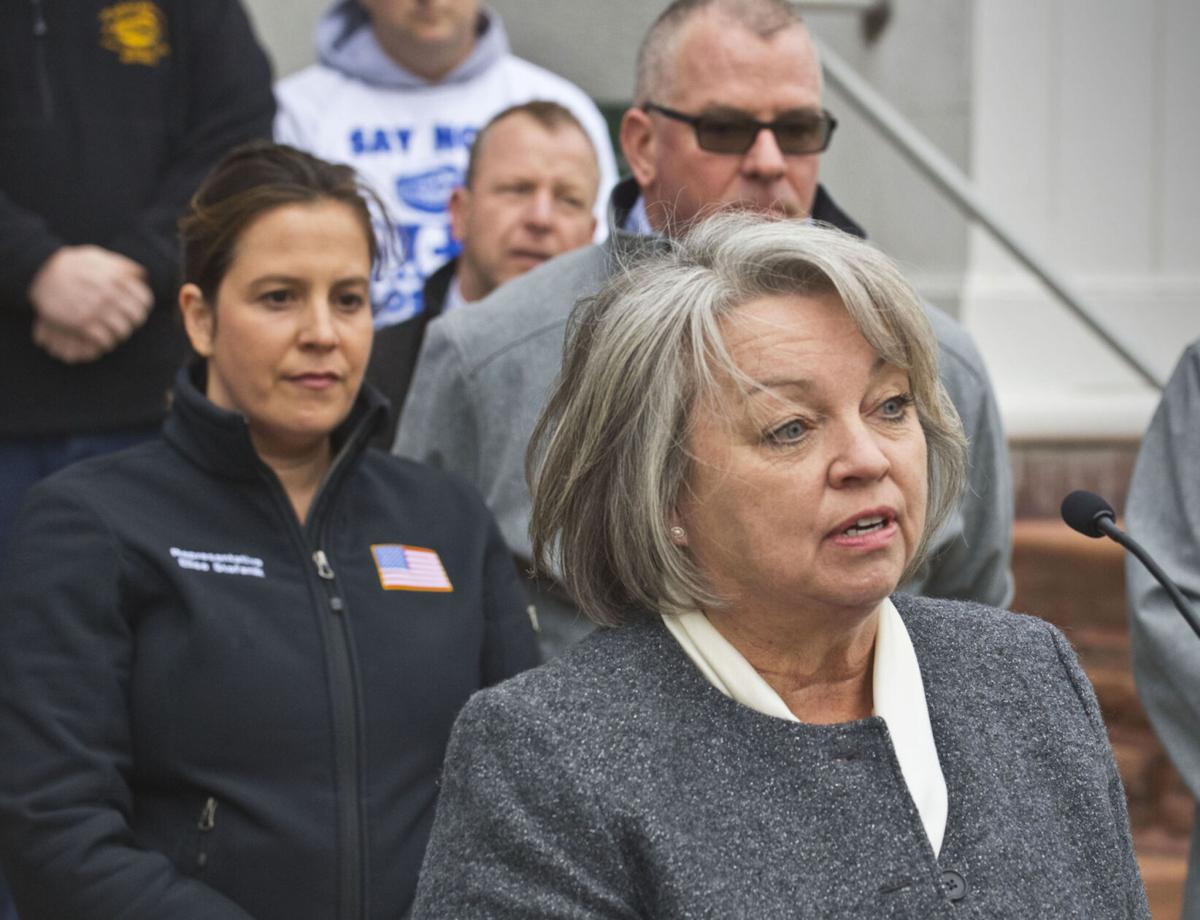 Congresswoman Elise M. Stefanik, left, and State Sen. Patricia A. Ritchie talk with members of the New York State Correctional Officers and Police Benevolent Association on Thursday before the start of a press conference on the steps of the Ogdensburg Public Library. Christopher Lenney/Watertown Daily Times

Congresswoman Elise M. Stefanik shakes hands with Michael B. Powers, president of the New York State Correctional Officers and Police Benevolent Association, and an Ogdensburg city councilor, on Thursday before the start of a press conference on the steps of the Ogdensburg Public Library. Christopher Lenney/Watertown Daily Times

Attended by ranking members of the New York State Correctional Officers and Police Benevolent Association, including President Michael B. Powers, as well as state and local leaders, the rally drew roughly 50 people to the Ogdensburg Public Library to show support for the prison, one of six state facilities slated for closure in 2022.

Mr. Powers said that it’s a difficult time for many NYSCOPBA members who work at OCF and the other five prisons in the state.

“As the state Legislature and the governor’s office hastily called upon six facility closures, once again during the holiday season, uprooting many families, I am grateful to the many communities across the state of New York that have come together in these times of facility closures that have no input from stakeholders,” Mr. Powers said. “We are seeing significant rises in violence in our facilities across the state of New York and it’s become a tumultuous time for our members.”

Sen. Ritchie, R-Heuvelton, said she was proud to stand on the library steps with members of NYSCOPBA to show solidarity for the security and civilian staff of OCF. She recounted when Gov. Hochul had stated that she would “fight like hell for New Yorkers” before she was sworn in this summer.

“Guess what Gov. Hochul? We’re New Yorkers too, and ripping 300 jobs and families away from their loved ones, especially right before Christmas, is not fighting like hell for New Yorkers. It’s the wrong thing to do,” Sen. Ritchie said to a round of applause.

Sen. Ritchie said that there is no reuse plan for OCF and pointed to what the state had done at the St. Lawrence Psychiatric Center, where a number of deteriorating stone buildings have been fenced in for public safety.

She also argued that closing prisons during the COVID-19 pandemic and moving inmates to other prisons isn’t safe for the correctional officers or the incarcerated population.

“You can’t say you have to do your best for COVID and turn around and shut, not only OCF but five other facilities down and put so many people in the same spot,” Sen. Ritchie said. “So we are going to do our best to protect the public from COVID — or not. You can’t have it both ways.”

The senator called for Gov. Hochul to visit OCF and to meet with those impacted by the decision to close the prison.

“The least you can do would be to get in your car and travel up here and tour the facility and talk to the people you are affecting. So that is my challenge to you,” Sen. Ritchie said.

Mr. Powers introduced Rep. Stefanik, R-Schuylerville, as having been a friend of NYSCOPBA since she was first elected to Congress.

“I want to first start off by thanking our hard-working corrections officers, they put their lives and their health on the line every single day and they did so during the pandemic, during the worst in the height of COVID. Our corrections officers put their health on the line, and this is what New York state has done,” Rep. Stefanik said. “This is not a ‘thank you.’ This is a slap in the face to this community and to those hard-working individuals. This is a disgrace, that the governor of New York state would make this announcement right before the holidays.”

She said the closure was part of the “governor’s mansion’s attack on the north country” and what she called “Albany’s war on law enforcement.”

Rep. Stefanik called crime rates in the state and violence against correctional officers “unacceptable,” and called for Gov. Hochul to visit the Ogdensburg community.

“We deserve so much better from Gov. Hochul,” Rep. Stefanik said. “She does not have the guts to come up here to the north country and to look this community in the face. So I am publicly calling on her to come up as soon as possible before this year is over and hear from your constituents, New Yorkers who have worked so hard on behalf of New York state and on behalf of their communities.”