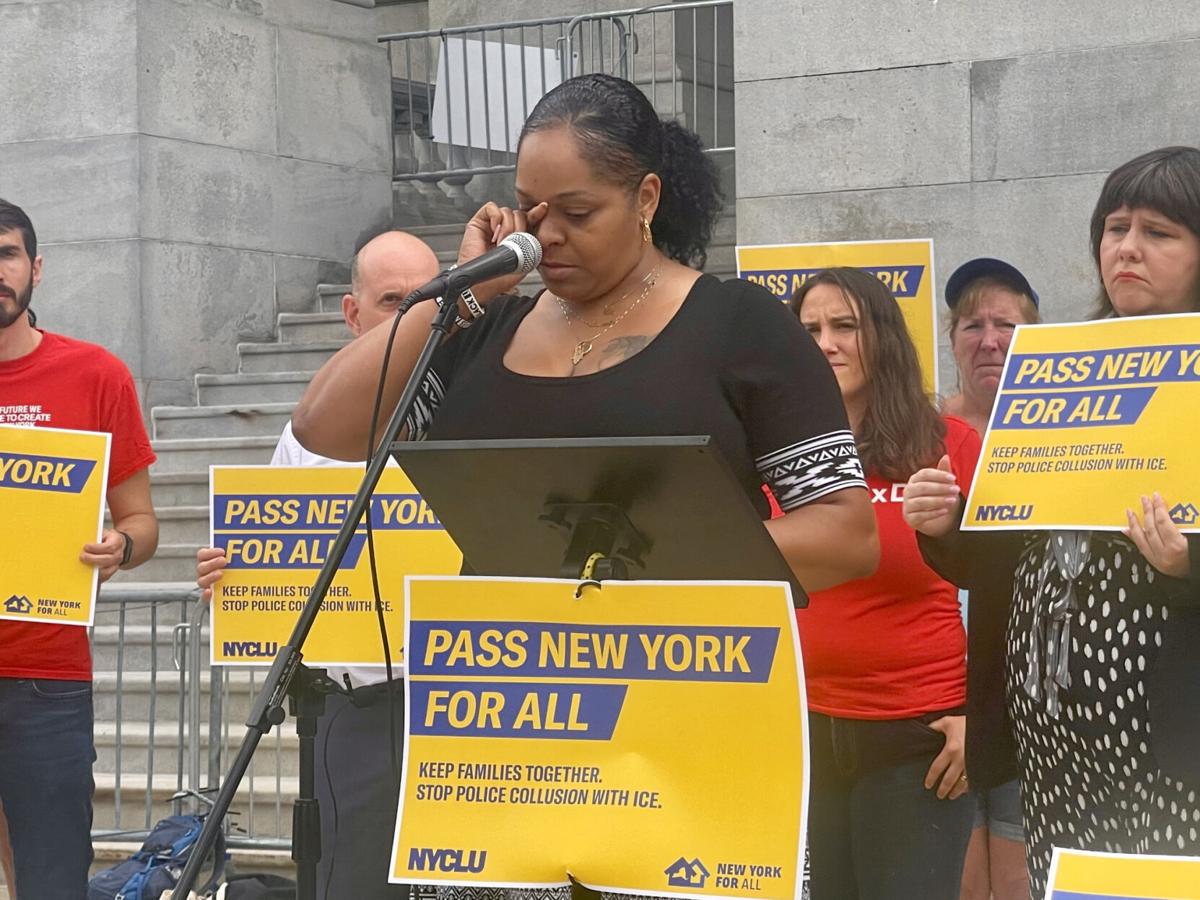 Dalila Yeend, a member of the Columbia County Sanctuary Movement, wipes away a tear in front of the state Capitol on Tuesday while recalling her detainment by federal immigration officers and to push lawmakers to pass the New York For All Act this week. Kate Lisa/Johnson Newspaper Corp. 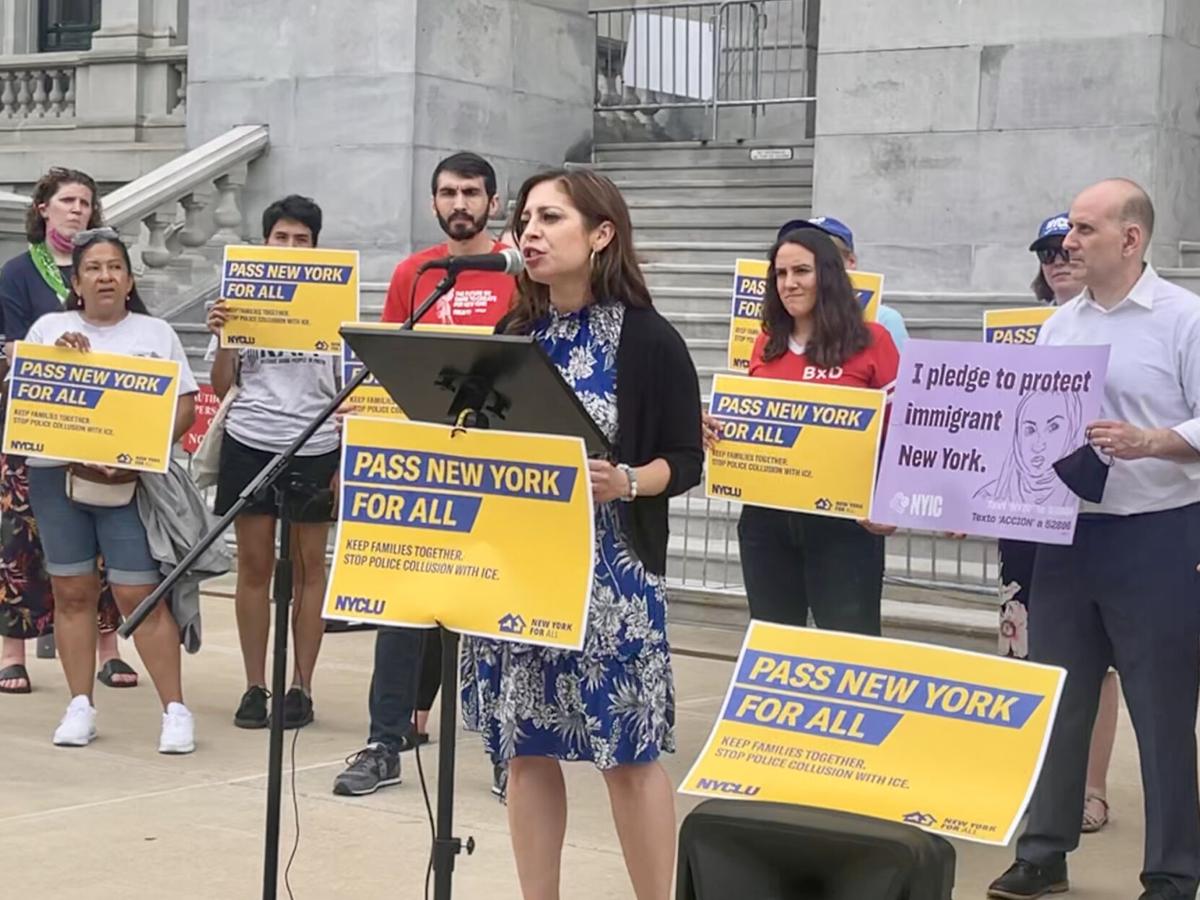 Assemblywoman Jessica González-Rojas, D-Queens, speaks in front of the Capitol on Tuesday pushing for lawmakers to pass the New York For All Act to make New York a sanctuary state for undocumented immigrants. Kate Lisa/Johnson Newspaper Corp.

Dalila Yeend, a member of the Columbia County Sanctuary Movement, wipes away a tear in front of the state Capitol on Tuesday while recalling her detainment by federal immigration officers and to push lawmakers to pass the New York For All Act this week. Kate Lisa/Johnson Newspaper Corp.

Assemblywoman Jessica González-Rojas, D-Queens, speaks in front of the Capitol on Tuesday pushing for lawmakers to pass the New York For All Act to make New York a sanctuary state for undocumented immigrants. Kate Lisa/Johnson Newspaper Corp.

The New York For All Act would make New York a sanctuary state and end local and state law enforcement from working with federal U.S. Immigration & Customs Enforcement, or ICE.

Local police and officials would not be permitted to ask any person about their immigration status if the bill becomes law.

Supporters rallied for the measure in front of the Capitol on Tuesday, saying the measure would protect undocumented immigrants and allow families to live without fear.

“This is not just a criminal rights issue, this is a human rights issue,” said bill sponsor Assemblywoman Karina Reyes, D-Bronx. “So many of our immigrant population is afraid of ICE. They are a rogue agency that has been stopping folks for no reason at all and detaining them indefinitely. We no longer can condone this as a state for this to keep happening in New York.”

Advocates rallied in West Capitol Park on Tuesday to push for the act’s passage before Thursday, or the last scheduled day of legislative session for the year.

Dalila Yeend, of Troy, recounted spending nearly three months in 2018 in an immigration detention facility in Batavia, in Genesee County.

“Because of a local police officer noticed my skin color and my Australian accent, they had ICE agents take me away,” Yeend said in West Capitol Park. “I had rolled through a stop sign and prepared to receive a simple traffic ticket. Instead, the officer asked for my immigration status.”

Yeend was driving with her son and daughter, then ages 9 and 11, when she was pulled over in the city of Troy, she recalled. Yeend has lived in Rensselaer County for 21 years, or since she was 17 years old.

“They watched while I was taken away in handcuffs to the police precincts even though I had committed no crime,” she said. “I was handcuffed to a bench overnight while the officer who arrested me called ICE about half a dozen times.”

The three-month separation left her children confused and scared.

“It didn’t have to be this way,” Yeend said, wiping away tears. “The New York For All Act could have stopped this from happening to me. What our lawmakers can do right now is to make a promise is they won’t allow this to happen to more people like more, or more children like mine.”

Assemblymembers reported to the Rules Committee on June 1. It moved through the chamber’s Codes and Ways and Means committees this session.

The bill has stalled in the Codes Committee in the Senate.

“In the Assembly we have the support — the Assembly tends to be a very progressive body,” Reyes said. “So we’ve been pushing Carl for a vote this session. I’m not certain if the Senate is going to move it, it doesn’t look like they have an intention of moving it, but I think that in the Assembly we have an opportunity to send a message about what our priorities are and what’s important to us, even if the Senate isn’t moving it. For us as assemblymembers, it’s important for us and the work in our body to be reflective of our values and this is one of them.”

Republican representatives across the state are largely opposed to legislation or financial assistance for undocumented immigrants.

Senate Minority Leader Rob Ortt, R-North Tonawanda, spoke against New York For All, he said because it would restrict local and state law enforcement.

Violent crimes, including shootings, homicides and burglaries, have skyrocketed in cities and urban areas across the state and nation over the last year. Restricting law enforcement while crime is spiking is the wrong move, the Senate leader said.

“As crime rates rise across New York, Democrats in New York and their progressive allies are focused on policies that handcuff law enforcement’s ability to do their jobs,” Ortt said. “The Senate Republican conference sides with the overwhelming number of New Yorkers who support our police and want them to do what they can to keep our communities safe.”

Assemblymembers Harvey Epstein, D-Manhattan; and Jessica González-Rojas, D-Queens; each called on their fellow lawmakers Tuesday to support the measure and get it passed before session ends.

Several members of the Columbia County Sanctuary Movement attended Tuesday’s rally in Albany. The organization has helped at least Capital Region residents who have been detained by ICE since 2018, including two in Catskill, one in Nassau and Yeend, in Troy.

“One of them received a traffic ticket, another was pulled over for having a loud muffler,” said Ivy Hest, the organization’s director of communications and administration. “If they get pulled over, it’s not as simple as getting at ticket. They do live in fear. Any time an immigrant gets behind the wheel of a car, they don’t know whether they’re going to be pulled over and whether it will mean being separated from their family and people that they love.”

Columbia County does not actively enforce immigration law, and codified its policy of restricting work with ICE at the beginning of March. Columbia County Sheriff’s officers refrain from asking about residency, place of birth, immigration or citizenship status except when legally obligated or required for reporting purposes.

“We are about community safety and about making sure that immigrants are able to survive and thrive in the places they call home,” Hest said. “New York For All would allow that safety. Communities would be able to talk with police without fear of police doing ICE’s work. Immigrants can drive without fear of being racially profiled and could be able to live in their homes without that same level of fear.

“It’s time for the state to take a stand and follow the trends of the rest of the state and that they will not participate in this process and in this program.”

So the Demorats want taxpayers to support ILLEGAL IMMIGRANTS. They are not immigrants. They are criminals and need to be deported. I'm sick and tired of hearing about homicides, robberies, illegal drugs that some of these illegal "immigrant" criminals are committing.