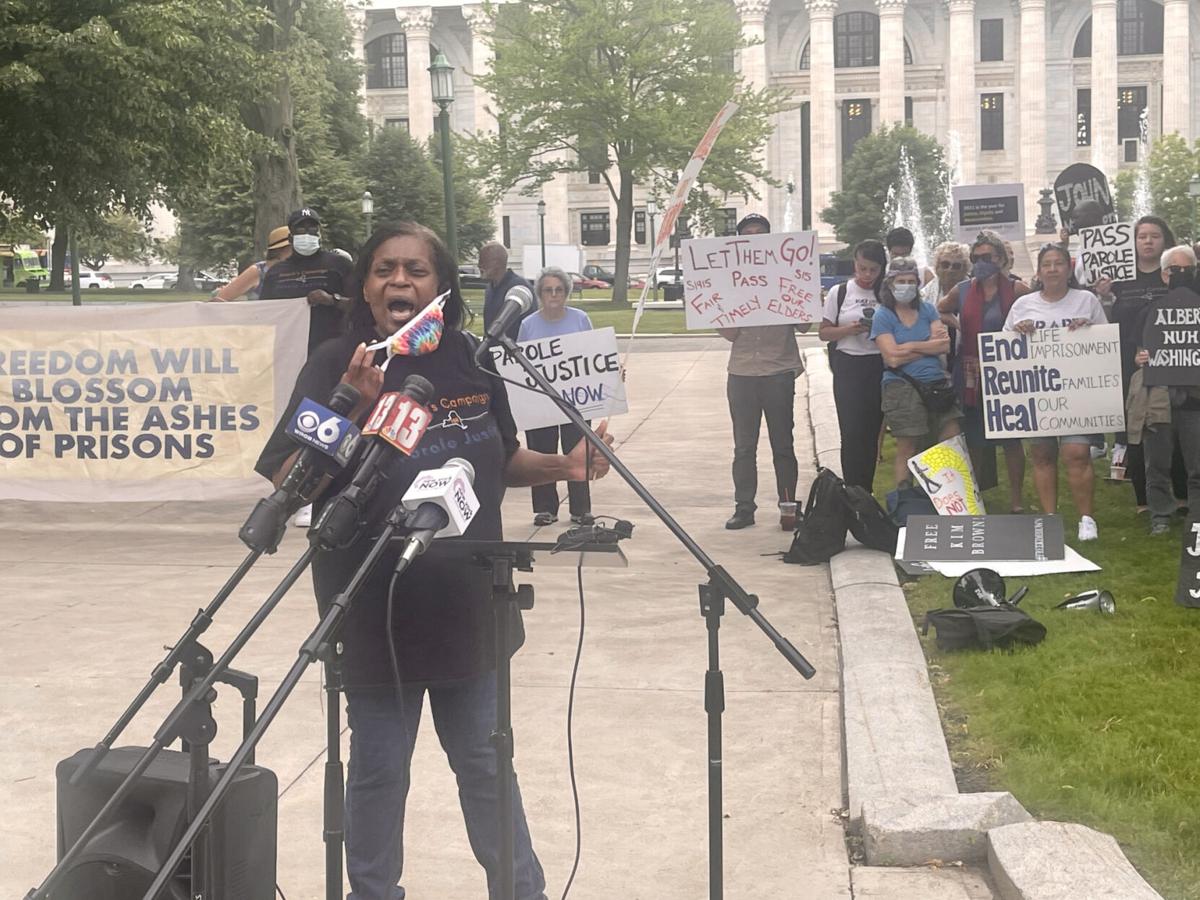 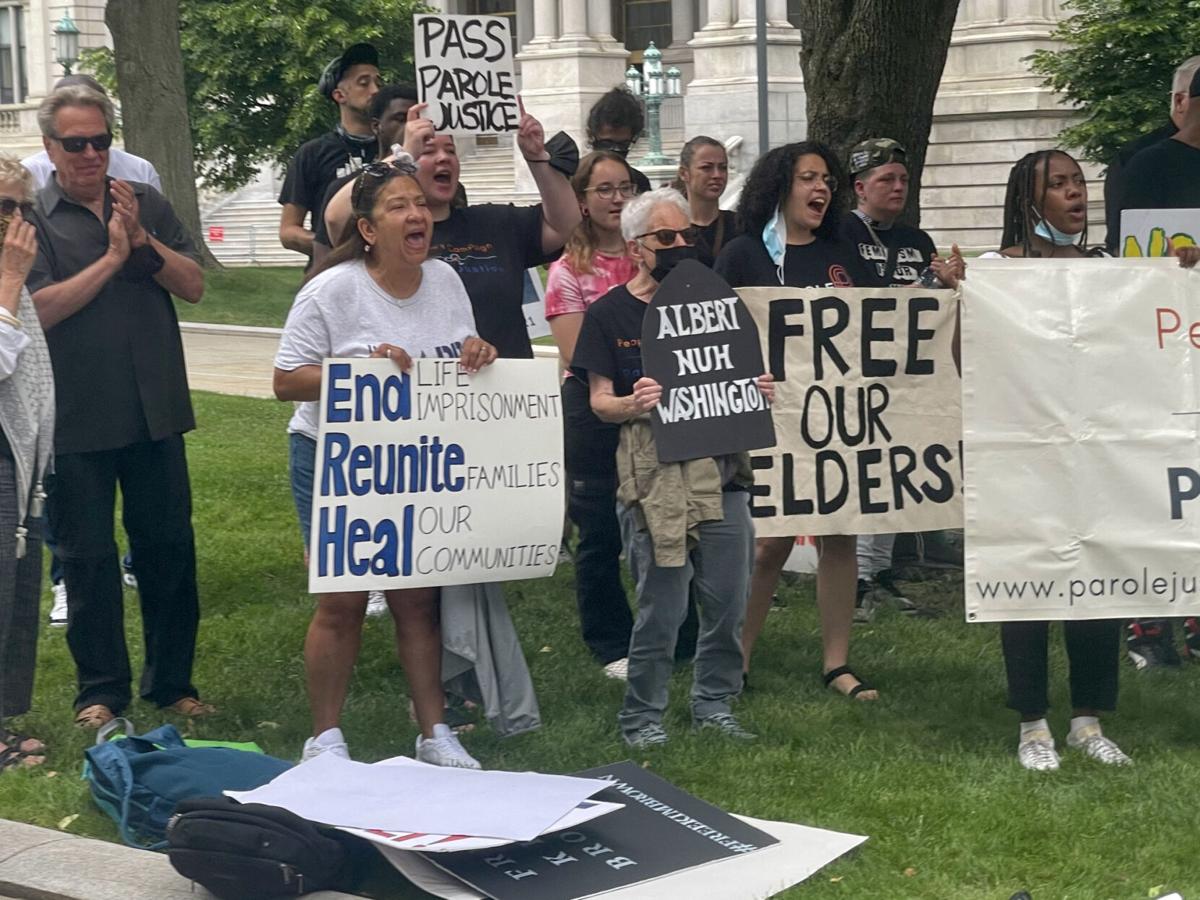 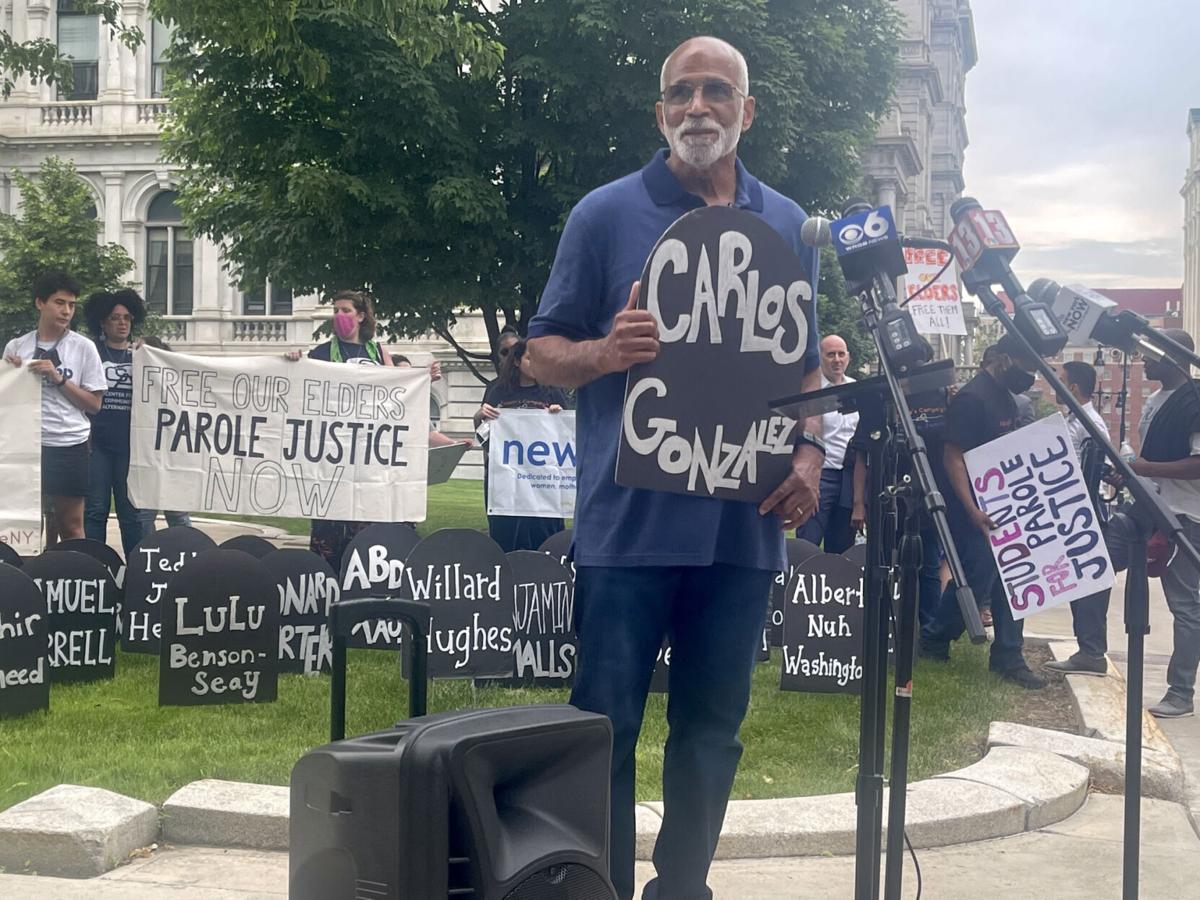 Jose Hamza Saldaña, director of the Release Aging People in Prison campaign, cradled a sign made to look like a tombstone in West Capitol Park on Tuesday while remembering his dear friend, Carlos Gonzalez, who died in state prison as an elderly man. Kate Lisa/Johnson Newspaper Corp. 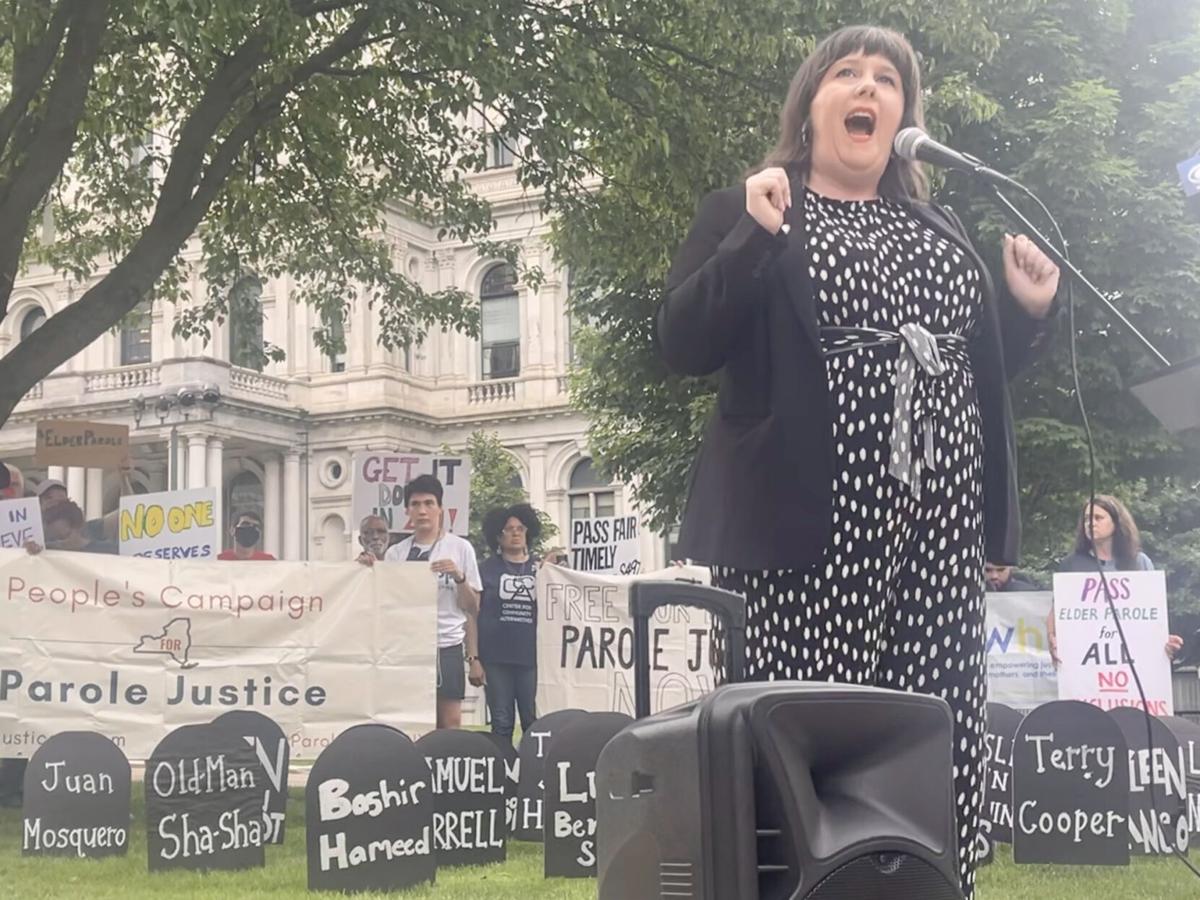 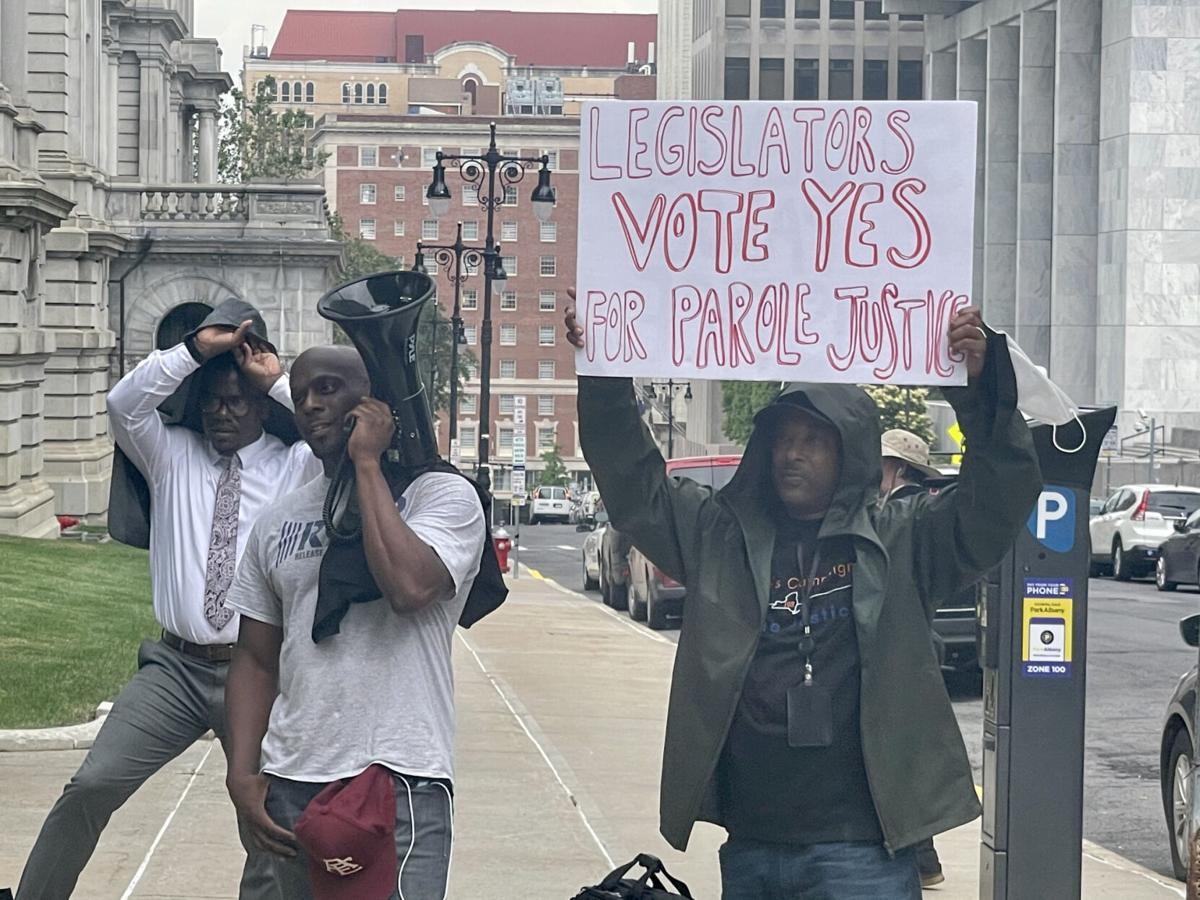 Lawmakers and advocates stand in solidarity for parole reform outside the state Capitol in Albany on Tuesday. Kate Lisa/Johnson Newspaper Corp.

Jose Hamza Saldaña, director of the Release Aging People in Prison campaign, cradled a sign made to look like a tombstone in West Capitol Park on Tuesday while remembering his dear friend, Carlos Gonzalez, who died in state prison as an elderly man. Kate Lisa/Johnson Newspaper Corp.

Lawmakers and advocates stand in solidarity for parole reform outside the state Capitol in Albany on Tuesday. Kate Lisa/Johnson Newspaper Corp.

ALBANY — Lawmakers reached an agreement on one of three main parole reform bills Tuesday, causing formerly incarcerated people and survivors of physical violence and sexual abuse to rally harder for changes to the state’s parole system.

“For too long, New York’s parole system has had a framework of punishment, rather than a framework of care,” sponsor Souffrant-Forrest said in a statement. “Our society has an obligation to provide support to those who are leaving prison and their families. The passage of the Less is More Act will make that support so much easier to give, and will make the process of parole so much more humane.”

Technical parole violations, as defined in state Penal law, include any violation of a condition of parole outside a felony or misdemeanor offense.

Lawmakers are expected to vote on the bill in both chambers Thursday — the last day of scheduled legislative session for the year.

Bill sponsors and co-sponsoring lawmakers remained tight-lipped Tuesday and would not answer requests for comment about where the Elder Parole and the Fair & Timely Parole Act stand in negotiations or if either measure will be brought to the floor for a vote in the next two days.

The Fair & Timely Parole Act requires the state Parole Board to evaluate incarcerated people eligible for release based on current merit and behavior, unless the person presents an unreasonable risk that cannot be mitigated by parole supervision.

Elder Parole would mandate inmates over 55 years old who served 15 or more consecutive years automatically be considered for parole, regardless of their crime or sentence.

Elder Parole may have saved the life of Carlos Gonzalez, a friend of Release Aging People in Prison Campaign Director Jose Hamza Saldaña.

“He was sick and dying when I left him in Green Haven,” Saldaña recounted in West Capitol Park on Tuesday, adding he promised Gonzalez he would visit a grave in San Juan, Puerto Rico, on his behalf and send him a photo of the site.

He visited the grave within a month of his release.

Advocates placed dozens of makeshift headstones in the grass of West Capitol Park to create a prison graveyard with names of incarcerated people who died behind bars or representing others who will die without changes to the parole system.

Saldaña served in state prisons across New York for 38 years. He was released in January 2018 after four parole denials.

Fair & Timely Parole Act and Elder Parole have also been a focus of progressive Democrats this session to continue state criminal justice reform.

Advocates rallied outside the state Capitol in Albany, where visitors continue to be barred from entry from leftover COVID-19 restrictions, Monday and Tuesday, with plans to continue demonstrations through the end of session.

Darlene “Lulu” Benson-Saey, of Buffalo, was the first incarcerated woman to die from COVID-19 in the state. She died in April 2020 at the age of 61 while incarcerated at Bedford Hills Correctional Facility.

“It doesn’t take 45, 50 years to do anything,” Robinson said Tuesday. “So why are you holding them? It’s a paradigm of perpetual punishment. You are killing our future. You’re killing our generations.

“Everyone is worthy of redemption.”

Robinson, of Buffalo, noted an incarcerated man in Coxsackie Correctional Facility, a maximum-security prison in Greene County, who has been imprisoned since she was 8 years old.

“That’s insanity, and we call ourselves the Empire State? There’s nothing imperial about what you’re doing to our loved ones,” Robinson said. “I’m calling it what it is — it’s murder, when you take somebody out of their ZIP code ... and incarcerate them for 25, 35, 45, years.”

Elder and Fair & Timely parole bills have been met with opposition, especially from Republican legislators.

“These are bad policies, and they have real-world consequences,” Assembly Minority Leader Will Barclay, R-Pulaski, said in response to the proposed parole reform, citing a 300% increase in violent crime in Albany, 36% increase in Buffalo and other skyrocketing violent incidents in cities statewide.

Violent crime has spiked in cities and urban areas across the nation over the last year.

Barclay and Senate Minority Leader Rob Ortt, R-North Tonawanda, have been vocal against other Democrat-led criminal justice measures and continue to rail against bail reform, changed discovery laws and other proposals they fear could impact public safety.

“All the data tells you these policies are not working,” Ortt said Monday.

Advocates Tuesday argued the current parole system prioritizes continued punishment, which does not help survivors of crime or interpersonal violence.

Nearly 60% of people incarcerated in women’s prisons, and as many as 94% of certain women’s prison populations are survivors of violence, including sexual violence, intimate partner violence and child abuse, according to the American Civil Liberties Union and prisonpolicy.org.

“The majority of people who enter our prisons have experienced violence before their incarceration,” said Chel Miller, communications director for the New York State Coalition Against Sexual Assault at a rally Monday. “Prisons are sites of sexual violence. We need to center survivors who are often marginalized, survivors in prison. In support of survivor justice, we need to free our loved ones.”

Fair & Timely Parole has been moved to the Senate floor to be placed on the calendar for a vote. It was sent to the Assembly Codes Committee on Jan. 8.