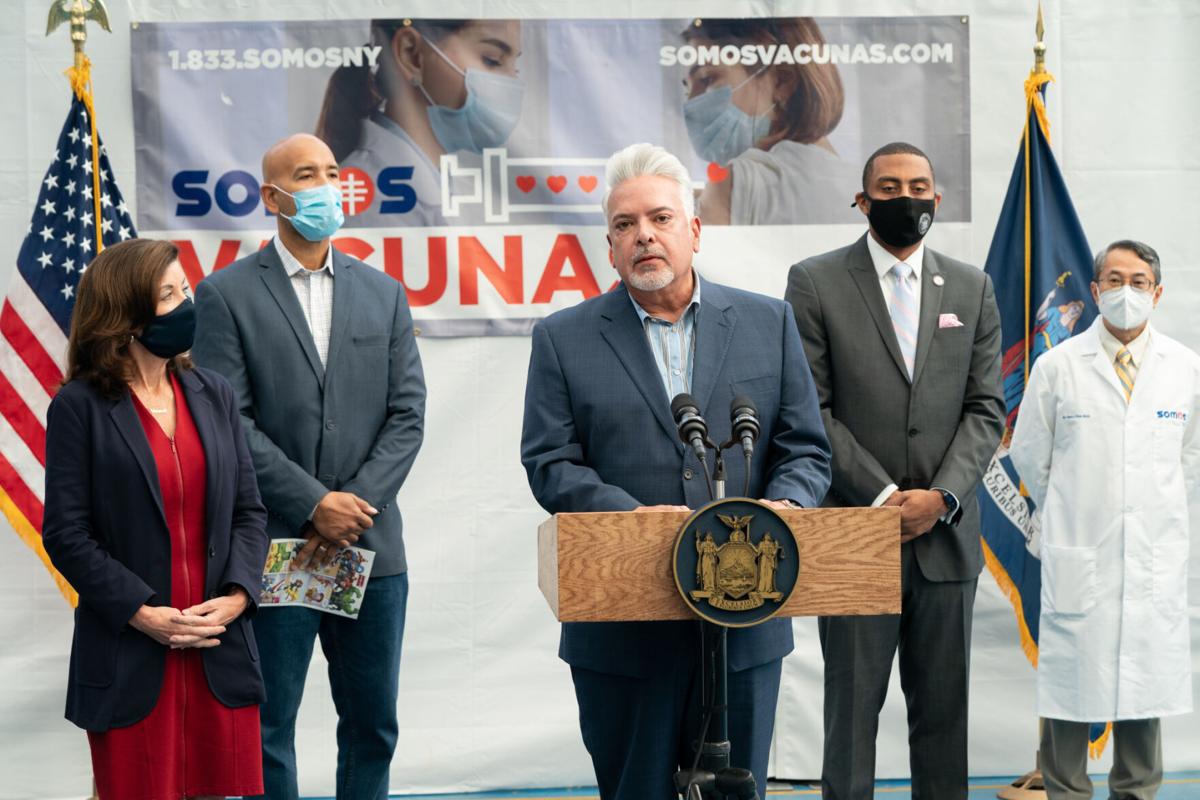 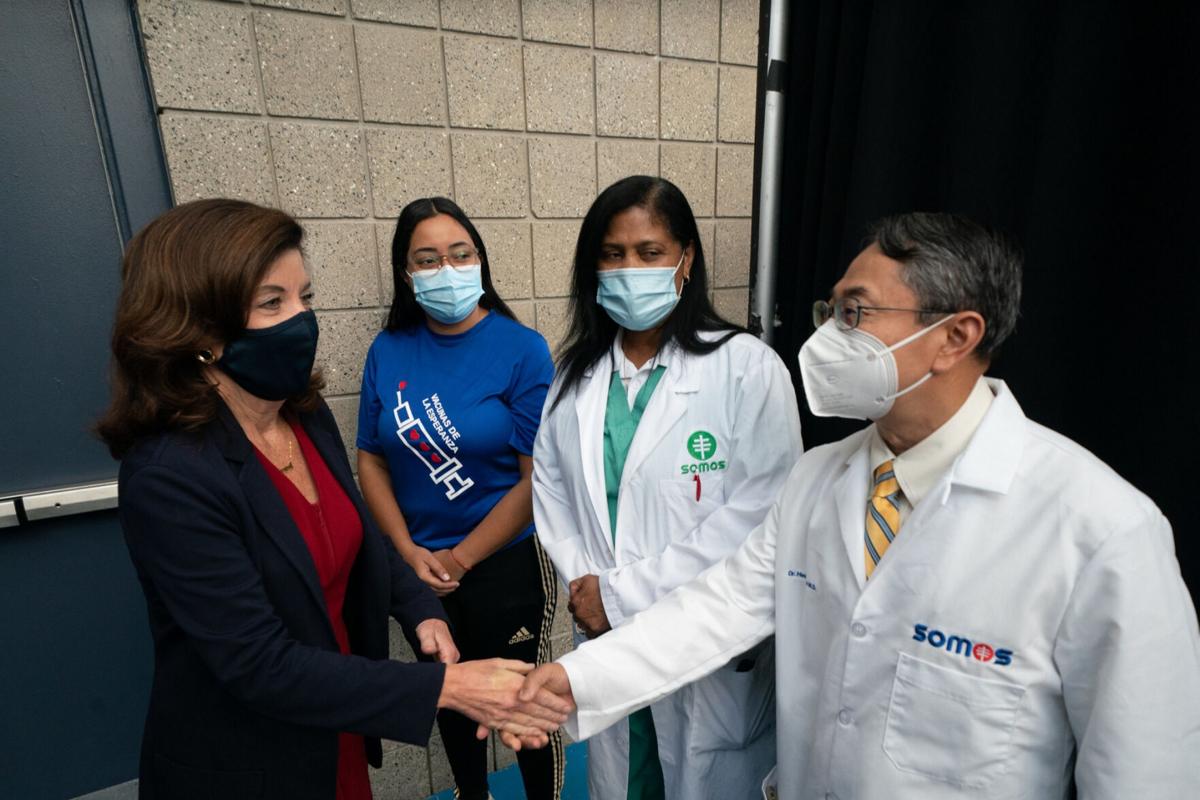 Gov. Kathy Hochul doubled down to defend the state’s vaccine mandate for health workers that goes into effect at midnight Tuesday, expressing confidence the legal mandates will hold up in court in the wake of several challenges from workers’ unions and affected employees.

The state’s COVID-19 vaccine mandate for workers in hospitals and nursing home starts at midnight. Workers must have at least their first vaccine dose Monday or face losing their jobs Tuesday. Hospitals across the state have started to curb elective surgeries and procedures with anticipated staff shortages when the controversial mandate goes into effect.

“I feel very confident about our changes in court going back to 1905,” Hochul said Monday at the Bay Eden Senior Center in the Bronx.

During the 1902 smallpox outbreak in Cambridge, Massachusetts, municipal health officials ordered all citizens to be vaccinated to curb the spread of the disease. Health officials at the time acted in compliance with a Massachusetts state law empowering them to mandate vaccinations if deemed necessary for public health or safety.

The 1905 plaintiff in Jacobson v. Massachusetts, Henning Jacobson, refused to be vaccinated, insisting he had a 14th Amendment right “to care for his own body and health in such a way as to him seems best.” He was fined $5 by the state of Massachusetts for the trouble.

At least one COVID vaccine dose, a medical exemption, a deferral or a religious exemption must be in place for New York health staff to be eligible to work after Sept. 27.

“We have a right to defend our people against a global pandemic and we’re entitled to take all means necessary to do that,” the governor said. “This is all about self-defense. I’m here to defend the people of New York.”

The state of California is expected to implement a similar mandate in the coming weeks.

Hochul, while wearing a ‘vaxxed’ necklace, also expressed confidence Monday that legal challenges to the vaccine mandate based on religious exemptions will not hold. Last week, U.S. District Court Judge David Hurd of the state’s Northern District extended a temporary restraining order for health workers affected by the vaccine mandate who refused the shot based on religious exemption.

The restraining order is in effect for workers requesting a religious exemption through Oct. 12.

The legal challenge based on religious exemption will not hold up in court, said Hochul, who worked as a legislative counsel early in her career.

“There’s not a legitimate [reason] for religious exemptions because the leaders of all the organized religions have said there’s no legitimate reason,” Hochul said. “We’re going to win that in court in a matter of days.”

Attorneys with Thomas More Society responded to Hochul’s assertions in a statement Monday. The society requested the preliminary injunction. Hurd is expected to deliver a decision before Oct. 12.

“New York’s Gov. Hochul is using every strong-arm tactic she can to attempt to coerce employees into taking vaccines against their will,” Thomas More Society special counsel Christopher Ferra said Tuesday. “She is also demonstrating disrespect, at a minimum, if not outright hostility to the deeply held religious convictions of our clients as well as thousands of others. We have solid grounds for prevailing on our motion for a preliminary injunction. The governor’s bullying is intended to coerce as many as possible into taking the vaccine before the court rules. And now she threatens to declare a state of emergency based on the emergency she herself has created by calling for the firing of dedicated front line health care workers who were yesterday’s heroes but are suddenly pariahs because they will not bend to the governor’s arbitrary will. The same doctors and nurses who treated patients for 18 months without being vaccinated—often contracting COVID, recovering, and returning to front line medical care—are now being depicted as disease-carrying villains. This is not science. This is demagoguery.”

Hochul will sign an executive order by the end of Monday to give her the authority to use the National Guard, recruit retirees and bring in supplemental health workers from out-of-state, or from other countries.

Hochul will explore reassigning workers from facilities with high vaccination rates to places that need help, she said.

Downstate facilities are better off than many health facilities upstate, Hochul said.

The governor did not have exact numbers of statewide health staffers expected to lose their jobs under the mandate as several health workers continued to get vaccinated against COVID-19 Monday — their final day to get at least one vaccine dose to stay employed in a New York facility.

Columbia Memorial Health CEO Jay P. Cahalan sent a memo to all staffers about the impending mandate Monday morning, encouraging everyone to get vaccinated against COVID-19.

“I know that none of us wants to lose a single staff person, but unfortunately, it is likely that some staff will be ineligible to work according to the New York state rule that is going into effect,” Cahalan said. “If you have not carefully considered this already, and we truly hope that you have, please do so immediately and make it known how you will choose to move forward.”

“Last week, we had a steady stream of people from CMH coming down and getting the shot, which is a plus, but I think like any other public health director out there, I’m holding my breath a little bit about what could happen at CMH if these folks just continue to decline the shot and they leave,” Columbia County Public Health Director Jack Mabb said Monday. “The hospital is hurting enough for staffing without having even a small number of people leave.”

Many hospitals in the Capital Region, Western New York, the North Country and around the state report higher patient volumes, and a record number with flu or COVID-like symptoms.

“To varying degrees, the health care situation we find ourselves in is also a national phenomenon,” Cahalan said. “I know that some people in the community perceived the issue as a staffing shortage — that’s an oversimplification. While we all agree shortages have affected the entire health care industry, the challenge of matching staffing to patient volume is impacted by numerous other factors, some of them are new.”

“In a very short window of time, Gov. Hochul is demonstrating she’s just as big of a bully as Andrew Cuomo ever was,” Langworthy said to reporters in New York City on Monday. “New York health workers, both private and public, will have a vax mandate thrust down on them that makes them choose between their career they devoted their lives to and losing their jobs if they don’t get the vaccine.”

State and federal officials who rail against vaccine mandates cite the constitutional need for personal choice and medical freedom.

Langworthy is vaccinated, he said, and believes in the COVID vaccine, but added people with religious or medical concerns should not be legally dismissed.

“Get stuck by the needle or get fired is what Kathy Hochul has to say,” he said. “Hospital workers, which there is a shortage of to begin with, are kicked to the curb if they refuse the mandate. It’s wrong, it’s unconstitutional and it’s un-American, and people need to remember this when Kathy Hochul steps forward and asks for your vote next year.”

The mandate is not necessary, Hochul said, if every person did the right thing and got vaccinated against COVID-19. Breakthrough coronavirus infections are on the rise with strengthening variants of the fatal disease, which has killed at least 54,769 New Yorkers to date.

“My desire is to have the people who’ve been out there continue to work in their jobs working in them safely,” the governor said. “To all the other health care workers who are vaccinated, they also deserve to know that the people they’re working with will not get them sick.

“...Your co-workers want you to do this — don’t make the burden heavier on them as well.”