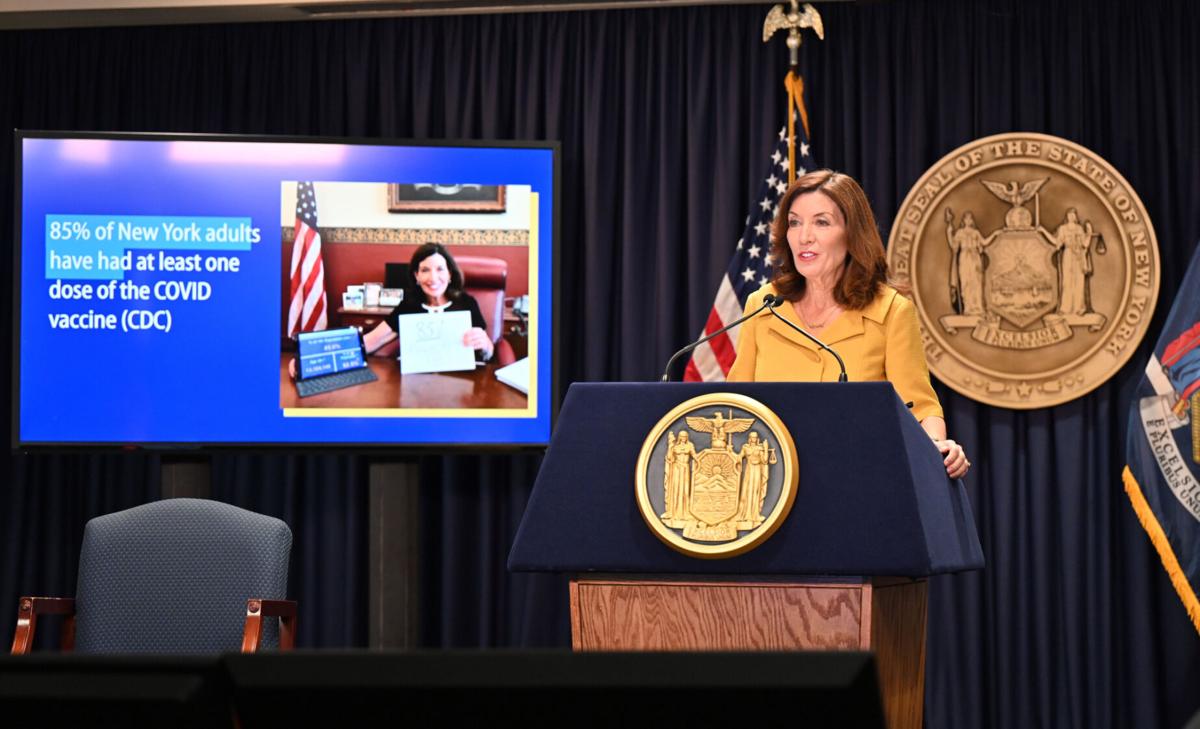 Gov. Kathy Hochul and other top state officials will appeal a federal court decision allowing religious exemptions to the state’s COVID-19 mandate for health workers, she said Wednesday during a coronavirus briefing in Manhattan. Courtesy of Gov. Kathy Hochul's Office 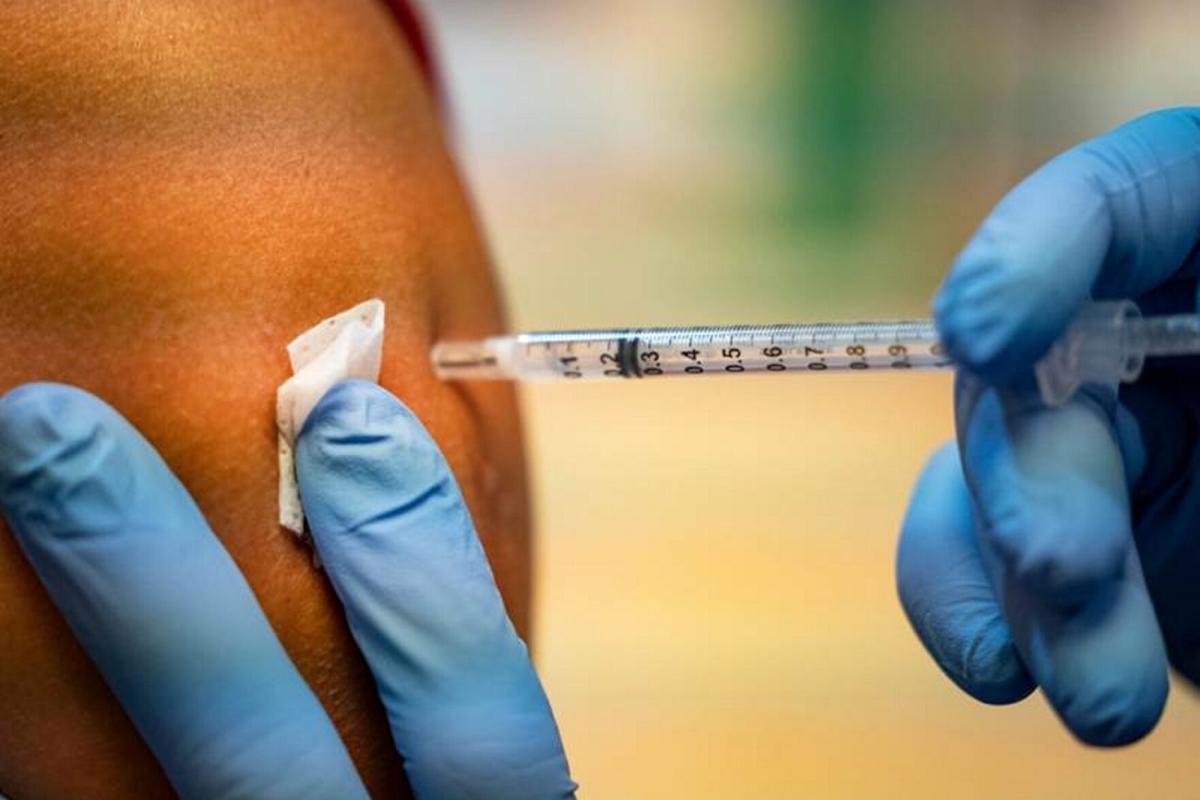 A patient receives a vaccine dose for protection against COVID-19. Courtesy of Tribune News Service

Gov. Kathy Hochul and other top state officials will appeal a federal court decision allowing religious exemptions to the state’s COVID-19 mandate for health workers, she said Wednesday during a coronavirus briefing in Manhattan. Courtesy of Gov. Kathy Hochul's Office

A patient receives a vaccine dose for protection against COVID-19. Courtesy of Tribune News Service

Gov. Kathy Hochul and the state attorney general’s office will appeal Tuesday’s decision by a federal judge allowing religious exemptions to the state’s COVID-19 vaccine mandate for health workers, blowing holes in Hochul’s confidence the mandate would be upheld in court and raising questions about future requirements.

Defendants have 30 days to file an appeal in the federal U.S. 2nd Circuit Court of Appeals.

“We’ll be working on those papers right now, working with the Attorney General’s office as well,” Hochul said Wednesday during a COVID-19 briefing in Manhattan.

Judge David Hurd, appointed to the state Northern District Court in Utica by President Bill Clinton in 1999, granted a preliminary injunction Tuesday temporarily barring the state’s COVID vaccine mandate for health workers who claim a religious exemption against getting Johnson & Johnson’s one-dose or Pfizer or Moderna’s two-dose shot to protect against the deadly upper respiratory infection.

In his 27-page decision, Hurd asks about the state’s requirement conflicting with workers’ federally protected right to seek a religious accommodation from their individual employers.

“The answer to this question is clearly yes,” Hurd wrote.

Hurd ruled the state mandate under Hochul allowed medical exemptions, but not religious exceptions — a violation of Title VII of the federal Civil Rights Act of 1964, which prohibits employment discrimination based on race, color, religion, sex or national origin.

“If private hospitals are allowing medical exemptions, we struggle to see how it would be an undue hardship to grant the same type of accommodations for religious reasons as well.”

The decision about the mandate disappointed Hochul, she said Wednesday, before doubling down on her defense of the mandate that went into effect Sept. 27 requiring all New York health workers to have at least one COVID vaccine does.

“We believe it worked,” Hochul said. “It has had a dramatic effect on our ability to protect people, particularly health care workers.”

About 96% of active staff in all New York hospitals have received at least vaccine dose to protect themselves and others against COVID-19 — up from 87% Sept. 27 and 77% Aug. 24, or two days before the state Health Department approved the emergency declaration to enforce the requirement.

About 97% of active nursing home staff in the state have at least one vaccine dose, up from 92% Sept. 27 and 71% Aug. 24. In adult care facilities, 96% of active staff have received at least one injection with 94% of personnel in home health agencies, Hochul said.

“When someone is sick and they go into an urgent care center or they go into a hospital ... they need to know that the person taking care of them will not pass on this deadly virus to them or their family members,” she said. “That has been the whole objective behind this mandate. It’s not something we wanted to do, it’s something that this pandemic has forced us to do, and with the results we’re looking for.”

Employees must communicate and explain a credible religious exemption request with their private employer.

Employers can investigate if the employee’s claimed religious beliefs are sincere, but McHale said it’s difficult to undermine a person’s sincerity of religious faith in court.

Tuesday’s decision will allow any health worker denied a religious accommodation under the Sept. 27 vaccine mandate to take action.

Some hospitals placed unvaccinated health staff on leave while Tuesday’s decision hung in the balance.

Any unvaccinated New Yorkers who were denied a religious accommodation and terminated from their jobs should consider filing a challenge against their employer to file charges of discrimination under federal law, McHale said.

Plaintiffs argue they cannot consent to being vaccinated against COVID-19 because the three approved vaccines were tested, produced or connected with aborted fetal cell tissues. None of the available immunizations contain such tissue.

Hochul, who has spoken publicly about her personal Christian faith, said Wednesday she understands people who request a religious exemption from getting vaccinated.

“I have no doubt people feel strongly about this, but sometimes, you have to do a calculation of what is important to the extent that someone’s personal beliefs interfere with my ability and the people in the state of New York to be safe,” Hochul said. “Their beliefs are important and safely held, but we also have a public health objective that is overriding. That is the position we are taking in court.”

Hochul expressed confidence Wednesday, and has several times over the last two weeks, the legal challenge will not hold up in court.

She cited quotes from leaders of various organized religions encouraging their congregates to get vaccinated against COVID-19, and the safety and efficacy of the shot.

“The courts ought to pay attention to this, too,” she said, displaying a collection of statements from leaders on the screen. “What the religious leaders are saying is that they want people to get vaccinated.”

McHale said Hochul’s point is not a relevant legal argument.

“Government officials cannot determine the legitimacy of someone’s religious belief because a religious leader makes a statement,” he said. “That’s exactly how governmental leaders and our founders set up our country — to prevent religious inquisitions by secular government leaders.

“It’s a stretch for her to be confident about their legal position here,” he added. “It will all be relevant on appeal.”

The state required all hospital and nursing home workers to have at least one COVID-19 vaccine dose by Sept. 27. The state Health Department adopted an emergency regulation Aug. 26 requiring most New York health workers to be vaccinated against the virus within the next 30 days.

Hochul expanded the mandate to include home health aides, workers at assisted living, hospice care and other treatment centers