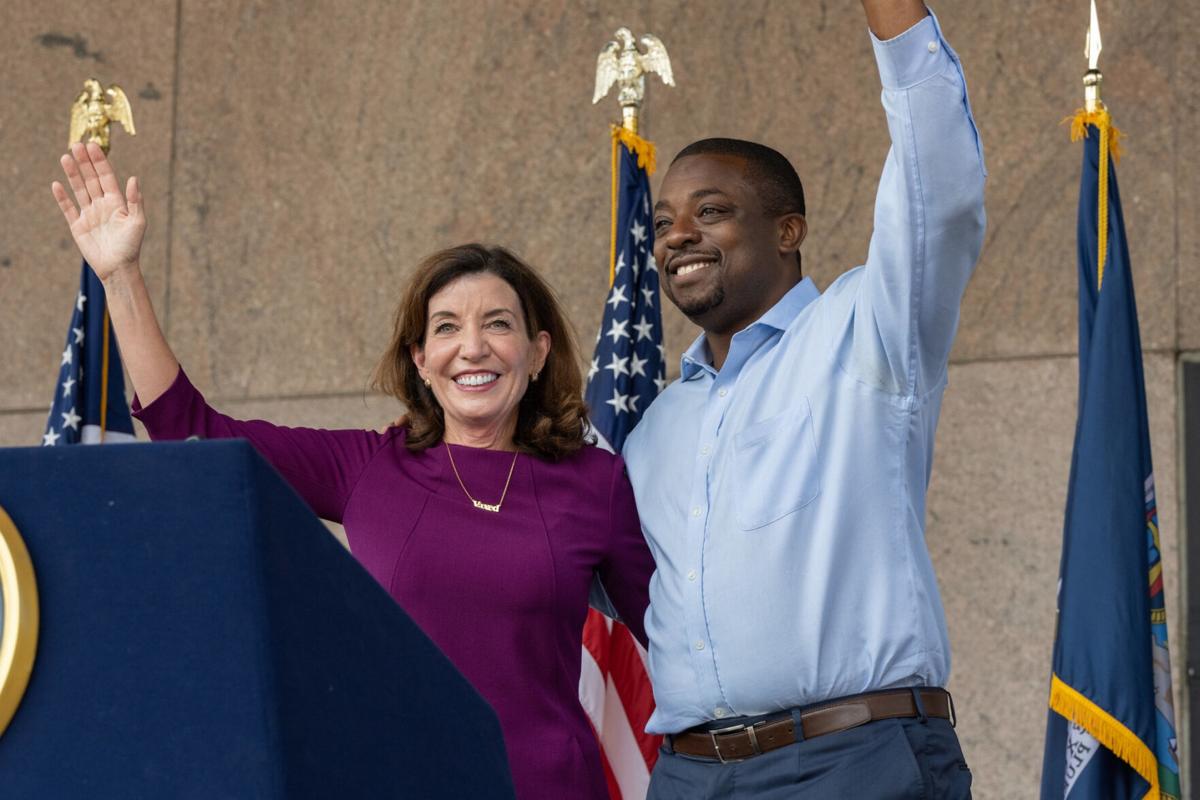 Gov. Kathy Hochul and Sen. Brian Benjamin stand together and wave at a crowd in Harlem on Thursday after Hochul announced Benjamin as her official pick for lieutenant governor. Benjamin is expected to be sworn in immediately after Labor Day. Courtesy of Gov. Kathy Hochul’s Office 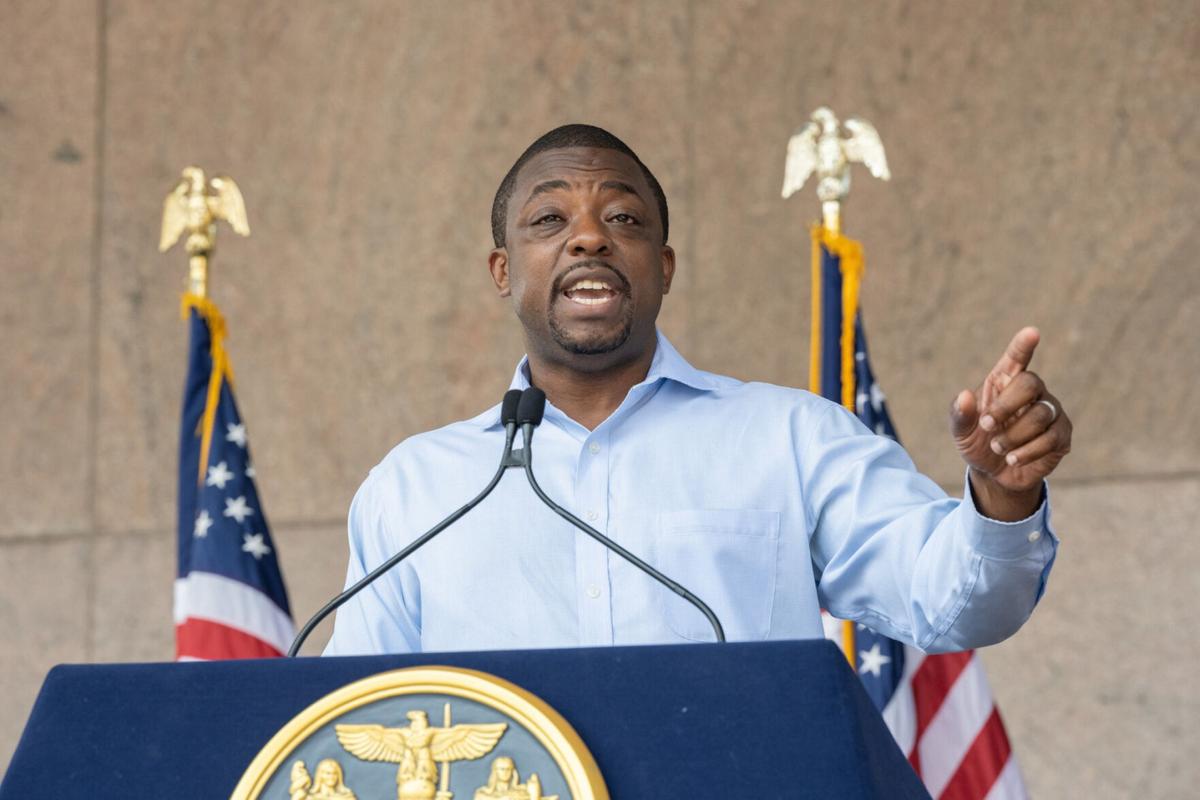 Gov. Kathy Hochul and Sen. Brian Benjamin stand together and wave at a crowd in Harlem on Thursday after Hochul announced Benjamin as her official pick for lieutenant governor. Benjamin is expected to be sworn in immediately after Labor Day. Courtesy of Gov. Kathy Hochul’s Office

HARLEM — Gov. Kathy Hochul and state Sen. Brian Benjamin stood with their hands clasped in solidarity Thursday, calling themselves partners, to mark the Manhattan senator’s selection as the state’s next lieutenant governor.

Benjamin will be sworn in as the state’s next second-in-command soon after Labor Day.

A Harlem native, Benjamin has represented the state’s 30th Senate District, which encompasses Harlem, East Harlem and the Upper West Side since 2017, and sits ready to vacate his position as senior assistant majority leader in the Legislature’s upper house in the coming weeks.

“I am so delighted to announce my partner — and the word ‘partner’ means something to me,” Hochul said just before announcing Benjamin. “Someone who works side by side in the trenches. Someone who will be out there championing our policies and our administration’s agenda in every corner of the state with a real focus on New York City because New York City needs our help. This individual is someone who’s been through the trenches, starting locally where he was on his community board, where he worked his way up to elective office and someone I’ve become a dear friend of in the Senate.”

Various news outlets reported Hochul’s pick Wednesday, but the governor would not comment on her selection until Thursday’s event.

Democrats have championed Benjamin during his time in the Senate as a leader on criminal justice reforms and affordable housing. He chairs the Revenue and Budget Committee.

“I’ve got very big shoes to fill because there has been no lieutenant governor who has traveled this state, all 62 counties, working hard,” Benjamin said. “There is no one more ready to be governor right now than Gov. Kathy Hochul. But I’m up for the task. I got Harlem by my side.”

Hundreds in attendance responded with cheers. As the senator started to speak, members of the crowd repeatedly chanted “Harlem!”

Hochul and Benjamin noted their past work walking the streets of Harlem together, registering voters, visiting small businesses or packing up community meals at a community soup kitchen.

Benjamin thanked his mother, stepfather and wife and daughter, Cathleen and Caroline, before recalling his decision to leave banking and dedicate his life to public service.

“A lot of people thought I was crazy — they thought that I had no idea what I was doing,” he said. “And now I can stand here and say to every one of you, anyone listening at home, pursue your dreams, follow your passions. Believe in yourself, even when no one else believes in you and surround yourself with people who support you, real warriors, real fighters, real people who, when you’re on your darkest moment, on your darkest day, they will say to you, we can make it.

“...We need each other to pursue our dreams, to pursue what we are here to do. So many young kids who are walking down 125th Street right now need to know that this world is here for them and we need to help them take it. Government has to help them take it. Our community needs government to work, and that’s what we will do for the state of New York.”

Hochul and Benjamin highlighted their priorities for the state, including the urgent need to defeat the COVID delta variant, getting more New Yorkers vaccinated against COVID-19 and getting billions of dollars in Emergency Rental Assistance Program funding to needy tenants, property owners and small landlords devastated by the pandemic.

Eligible New Yorkers who apply for assistance will be protected from eviction for one year.

Hochul and Benjamin are unified in issuing a statewide mask mandate for students and teachers for the upcoming 2021-22 school year.

“Get used to it, my friends,” Hochul said. “I’m going to make sure that the environment for school is safe for our children, teachers and administrators, and that’s why we’re going to have that across the state of New York.”

“...as our next lieutenant governor, I know he will continue this fight for all New Yorkers,” James said in a statement. “His track record and commitment to public service will help advance our state, and I look forward to working with him in his new capacity. Congratulations to our new lieutenant governor, Brian Benjamin. I know you will serve New Yorkers well.”

Benjamin thanked Senate Majority Leader Andrea Stewart-Cousins, D-Yonkers, who inspired him to act with integrity in the public domain as they both have risen to shatter glass ceilings. Stewart-Cousins became the first woman of color to lead a state legislative conference in 2019.

“Gov. Hochul’s decision to appoint Sen. Brian Benjamin as lieutenant governor underscores her administration’s commitment to bringing new voices and representation to the Executive Chamber,” Stewart-Cousins said Thursday. “Sen. Benjamin has been a consistent ally here in Albany, working tirelessly on behalf of his constituents and fighting every day for a better New York. He represents the dedication needed to bring real change and results to our state. I look forward to working with this new administration on important measures so we can continue to serve the people of New York.”

“Raised in a union household, Sen. Benjamin understands the vital importance of organized labor to middle-class families and has also been a leader in providing affordable housing and job training to the residents in his community,” Jacobs said Thursday. “Sen. Benjamin’s relationships in the state Legislature and his longstanding community ties in downstate New York will greatly supplement Gov. Hochul and immediately assist her administration with the priorities she laid out [Tuesday].”

Republicans wasted no time questioning Benjamin’s past ethical use of campaign funds, ties to former Gov. Andrew Cuomo and sounded the alarm about his far-left stances on criminal justice reforms and support of cutting spending for police.

The state Republican Party sent out a statement with

“We see that with new mask mandates in schools, and we see it in her new pick for lieutenant governor — state Sen. Brian Benjamin is an awful choice for New Yorkers who are already hitting their breaking points due to Albany’s constant attacks on their wallets, safety and freedoms!” according to Zeldin’s campaign. “In case you didn’t know, Benjamin has championed cashless bail, strongly supports defunding the police, ushered into law the highest taxes in the country and is behind so many more disastrous policies.

“This is a lawless pick from Andrew Cuomo’s lieutenant, and another reason why we need to be all in to save our state!”

During his remarks Thursday, Benjamin stressed the need to fight gun violence and the skyrocketing rates of violent crime in cities across the state and combatting homelessness, which also exponentially increased in urban areas in wake of the COVID pandemic.