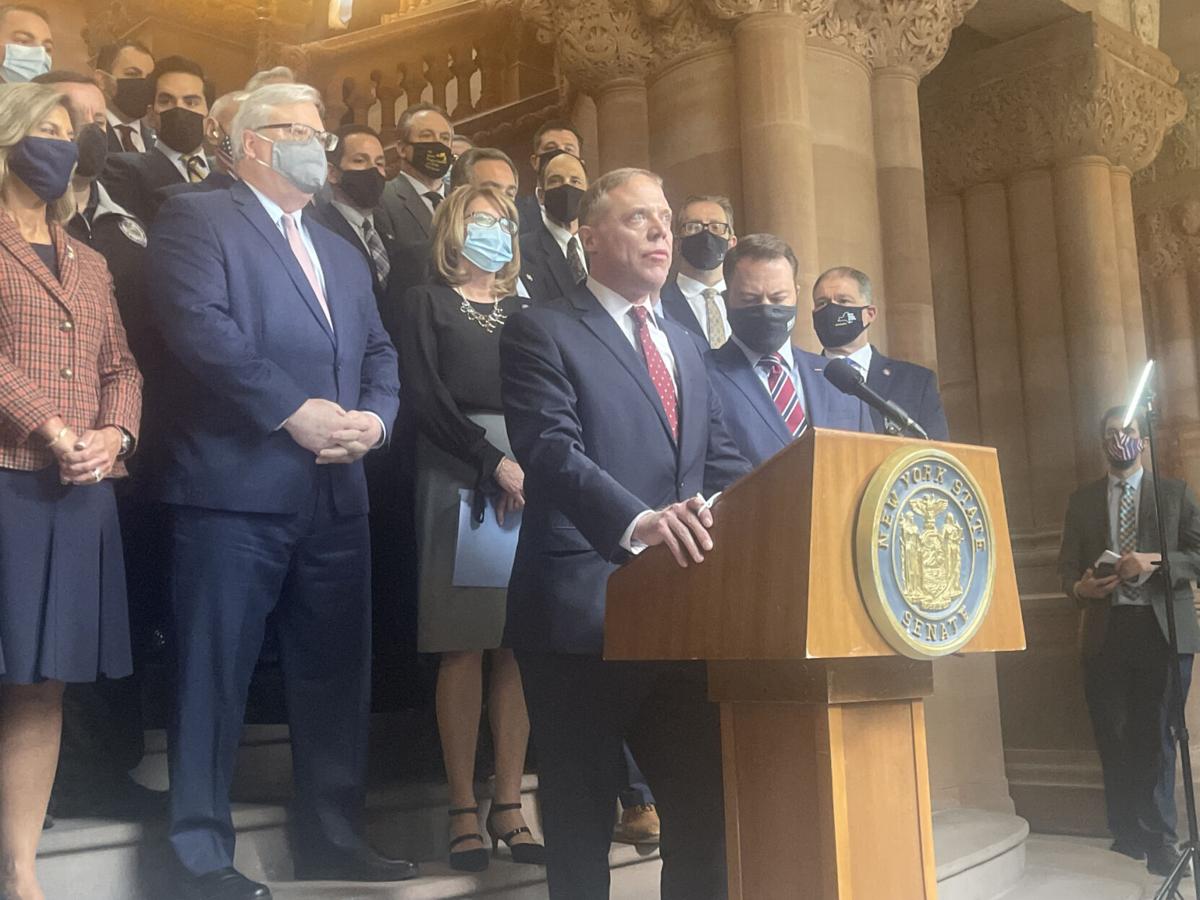 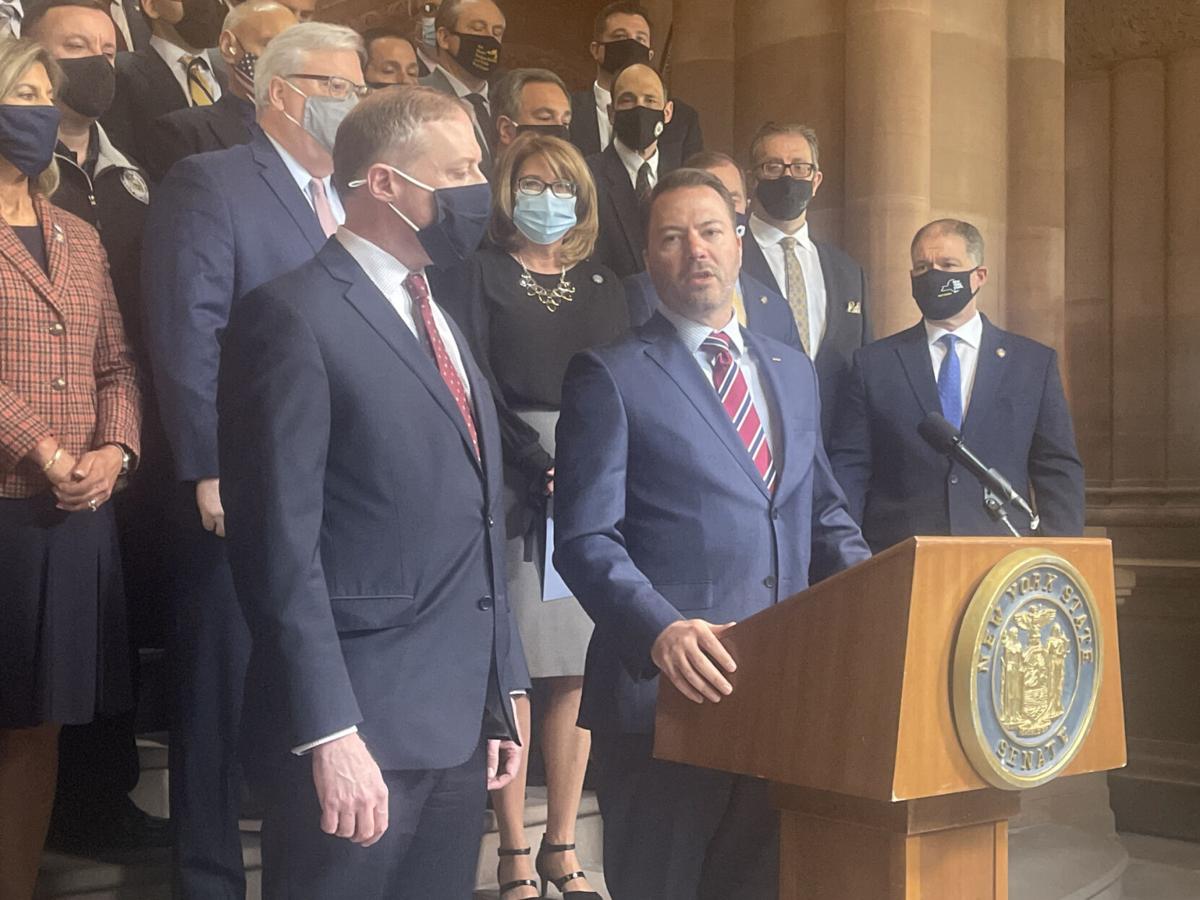 ALBANY — Dozens of Senate and Assembly Republicans gathered to rally at the Million Dollar Staircase in the state Capitol on Monday to intensify their push for Democrats in the majority to vote to repeal Gov. Andrew Cuomo’s expanded authority during the COVID-19 pandemic.

Senate Republicans introduced a hostile amendment during afternoon session for the 15th time since mid-January to repeal the governor’s additional spending powers and ability to hand down policies that the Legislature approved March 3 in response to the coronavirus pandemic.

“All these things we’re passing today don’t mean anything as long as the governor retains his emergency powers — he can just override them by executive order,” Senate Minority Leader Rob Ortt, R-North Tonawanda, said on the chamber floor Monday while introducing the hostile amendment to rescind Cuomo’s authority on bill No. 3016A — a nursing home reform bill sponsored by Sen. Gustavo Rivera.

“It’s time this body is brought back to a coequal branch of government.”

Senate Democrats voted on a procedural motion Monday and denied the amendment to be put up for a vote.

Assemblymembers also did not vote Monday on similar hostile amendments Republicans added to two bills to strip the governor of his emergency powers.

Lawmakers in the Senate and Assembly GOP gathered in the Capitol on Monday to urge their Democratic colleagues to repeal Cuomo’s authority in the wake of controversy surrounding the state’s underreporting of nearly 6,000 COVID-19 deaths in nursing homes and a resulting federal investigation into the governor’s administration and several senior members of the state Coronavirus Task Force.

“This is not a new issue,” Assembly Minority Leader Will Barclay, R-Pulaski, said Monday, adding lawmakers voted to grant Cuomo the additional power at the start of the pandemic last March to allow for quicker response at the height of the public health crisis.

“We thought the governor could act faster in the matter of public health,” Barclay said. “The need for executive powers is no longer here. ...We don’t need to wait any longer. This is the time to take action.”

Representatives from Cuomo’s office have defended the governor’s continued expanded decision-making, as the Legislature could vote to override the policy with a simple majority.

Biaggi sponsors a Senate bill to strip Cuomo’s additional authority. The hostile amendment Ortt introduced in the Senate on Monday was directly lifted from Biaggi’s bill.

Representatives from both minority conferences Monday said Republicans will continue to introduce hostile amendments to repeal Cuomo’s authority until they are successful.

Republicans in the Senate minority conference attempted to strip Cuomo of his emergency powers last May and July.

“The latest scandal has nothing to do with rescinding the governor’s powers — our conference has called for that for months,” Ortt said. “It’s being able to provide oversight and an accountability for an executive who has shown gross disrespect for every person and more importantly has shown disrespect for the people we represent.”

Representatives from Democrats in both chambers did not return requests for comment.

“This legislation creates a bipartisan Select Legislative Commission on Oversight of State Declarations of Emergency that will end the executive’s current authority to issue unilateral directives and require any future directives to be approved by the commission,” according to the Senate Majority conference. “The commission would have the authority to approve/disapprove a series of emergency actions by the governor.”

The commission is slated to have eight voting members appointed by Democrats and two Republican-appointed members.

The action would more closely monitor and evaluate Cuomo’s decisions, but not curb his expanded authority.

Now this is a story, all about how

My life got flipped, turned upside down

And I'd like to take a minute, so just sit back and chill

Screaming in some faces at the county courthouse, a deputy snatched me up like a cat grabs a mouse

On a ridiculous misguided crusade with no end in sight.

Rambling incoherently about the jail and the 930 trillion dollar bill,

That's how I became known as the joke of Catskill

Here's a remedy for all the above. 1) Leave Catskill and start anew but no ranting and raving about issues out of your control. No spewing lies about people you had removed from local government. No DUIs. 2) Stay in Catskill and turn your life around by being a productive citizen by getting a job. Keep a low profile and stop posting lies.

If you choose #2 people may forget about all your past issues.

And what does your situation have to do with this issue?