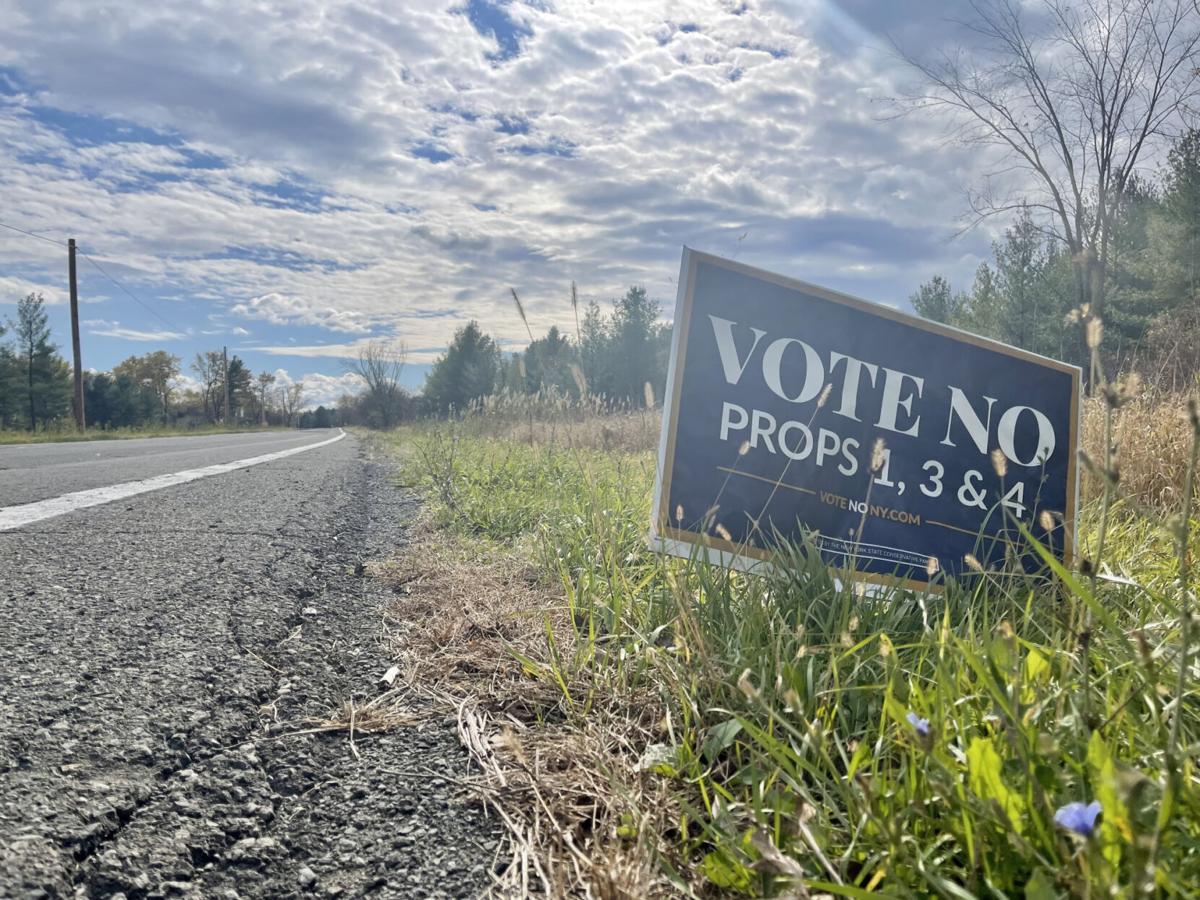 A sign on Route 9J in Columbia County urging voters to defeat state Constitutional amendment proposals 1, 3 and 4 on Election Day. The propositions failed by wide margins after weeks of Republican leaders campaigning against them. 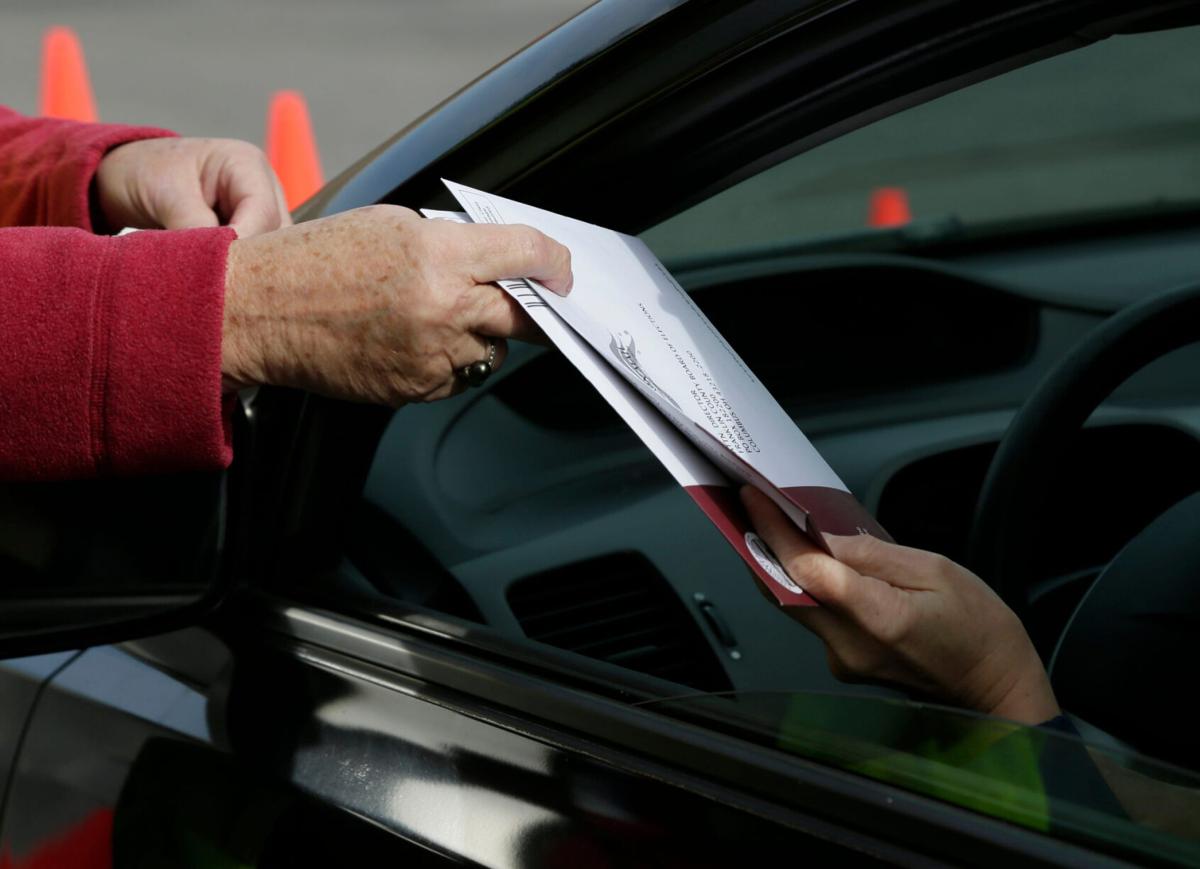 A motorist drops off their absentee ballot to a poll worker Tuesday.

A sign on Route 9J in Columbia County urging voters to defeat state Constitutional amendment proposals 1, 3 and 4 on Election Day. The propositions failed by wide margins after weeks of Republican leaders campaigning against them.

A motorist drops off their absentee ballot to a poll worker Tuesday.

Top Republican officials and legislative leaders worked hard for the last few weeks to warn voters to vote them down when they headed to the polls. They responded in kind Tuesday, strongly rejecting proposition Nos. 1, 3 and 4.

“Unfortunately, those Republican leaders lied to voters and they’re creating misinformation for their own political benefit, which I think is disgusting,” Gillibrand said Wednesday during an unrelated press conference.

The senator compared the state GOP leaders to President Donald Trump’s false claims the 2020 election was rigged and President Joe Biden was not the rightful winner.

“They’re following along Trump’s lead to lie to voters and misinform them about the truth, and it’s pretty bad,” Gillibrand added.

The third and fourth proposals, respectively, would have eliminated voter registration deadlines to allow same-day voting registration and permit any New York voter to request an absentee ballot without an explanation required under current law, such as location or health status.

About 51.3%, or 1.6 million voters rejected the third proposal to eliminate advance voter registration requirements in the state, to 37.7%, or 1.1 million votes in favor.

About 1.5 million New Yorkers, or 50% voted to defeat the fourth proposition to authorize no-excuse absentee ballot voting to 1.2 million in support of the proposal, or 38.6%.

Signs warning New Yorkers to “Vote No on Props 1, 3 & 4” have lined roads in Republican-leaning communities for weeks as Republican leaders in the state Legislature, state Republican Committee Chairman Nick Langworthy and others pushed voters to defeat the measures.

“The result was resounding — we saw Republican victories from the tip of Long Island and candidates at all levels ... what was essentially a Republican tsunami,” Langworthy said outside the state Capitol in Albany on Wednesday. “This was a victory for common sense.

“It’s pathetic she’s saying this a day after the election,” he later added in response to Gillibrand’s statements Wednesday. “Kirsten Gillibrand’s radical, progressive agenda has failed, and now she’s looking for someone to scapegoat and blame. People came together, including independent and [no-party] voters to reject these proposals because they were an assault on voter integrity across the state.”

Democracy advocates with Common Cause New York, Make the Road New York and the NY Civic Engagement Table started a campaign in mid-October to garner support for proposal Nos. 1, 3 and 4 before Election Day.

The groups held one rally in New York City about two weeks ago, and another in the city over the weekend attended by U.S. Senate Majority Leader Chuck Schumer, D-N.Y., and U.S. Rep. Jerrold Nadler, D-10. If other events in favor of the proposals took place, they were not widely publicized.

Republican leaders dedicated their spending and recent campaign efforts to defeat the proposals, and it worked, advocates said Wednesday.

Langworthy traveled to 40 counties across the state in 10 days, working with officials in the state Conservative Party and other groups, to share their concerns about the propositions with voters.

“I went to every single media market in the state of New York — Democrats didn’t do that,” he said. “They didn’t campaign, they didn’t go out there and say why we needed these things to be part of the state Constitution.

“I didn’t see Kirsten Gillibrand running around New York campaigning for these propositions to pass.”

Langworthy noted Wednesday the proposal to enact same-day voter registration could also pose issues of fraud because requesting voters to show legal identification before casting a ballot is against state law.

“A bus could come from Cayuga County ... all the people on the bus could say ‘I live here at this address now,’” he said. “Those poll workers are day laborers that are in minimal training and they would have no means to turn people away to investigate the validity of the vote.”

Common Cause Deputy Director Sarah Goff said the results were deeply disappointing and will undermine the state’s democracy.

“It’s a sad day for our democracy,” Goff said. “This would have made voting easier — there’s been zero evidence of voter fraud or illegal voting with expanded absentee ballot access or making it easier to register to vote.”

The first proposition would have changed the state’s redistricting process Jan. 1 — adjusting rules as the inaugural Independent Redistricting Commission works to alter two sets of draft maps for the 2022 election. It failed with 1.5 million people, or about 48.5%, voting against the proposition and 1.2 million voters, or 38.4%, who supported it.

The commission will send its plans to the Legislature in January.

“Ballot proposals 1, 3 and 4 were severely flawed and last night New Yorkers were absolutely right to reject them,” Assembly Minority Leader Will Barclay, R-Pulaski, said Wednesday responding to Gillibrand’s comments. “Democrats tried to hide the measures on a back of the ballot and hope for the best while Republicans rightfully made the public aware of the potential consequences and pointed out a number of serious concerns.”

“I seem to recall that in her last election, Sen. Gillibrand told voters she was committed to her Senate seat and wouldn’t run for president, but after she secured their votes and a victory, the senator jumped directly into the presidential primary,” he added. “I wonder how she’d characterize that campaign tactic.”

“New York state voters turned out to oppose the cynical Democrat tactics intended to inject more partisanship into the redistricting process and weaken the integrity of our elections,” Ortt said. “It’s clear Democrats in New York state were more focused on protecting their political power than listening to the people.”

The good-government groups will push for the Legislature to pass separate legislation to reform the state Board of Elections’ procedures and expand no-excuse absentee ballots.

“It was clear that the ‘No’ campaign was peddling mis- and disinformation and quite frankly fear-mongering on Nos. 1, 3 and 4 and those messages penetrated,” Goff said. “The members of the ‘No’ campaign felt like they were in an existential crisis if these things passed and they campaigned accordingly.”

Fighting the disinformation is an uphill battle, but is a work in progress, she added.

“We are still fine-tuning our messaging and thinking about better ways to reach voters and all of New Yorkers,” Goff said. “There’s a challenge across the country. It’s not easily solvable, but we are definitely making steps in the right direction to combat a lot of the disingenuous arguments.”

The state’s second and fifth proposals were the only to pass. The second proposal, which was supported by 1.9 million voters, or about 60.1%, compared to 859,002 votes against it, will amend the Bill of Rights Article I of the state Constitution to establish each person’s right to clean air, clean water and a healthy environment.

Gillibrand and U.S. Senate Majority Leader Chuck Schumer, D-NY, were among dozens of officials and organizations to endorse the statewide ballot proposals.

“If the ballot measures failed, it’s because people didn’t know enough about those issues,” Gillibrand said. “So, it just means our advocacy has to be stronger and more detailed. We need to explain to people why we’re worried about these things and why these ballot measures were important.”

*Editor's note: This story reflects a change to include information about a second rally advocates in favor of the ballot proposals held in New York City before Election Day.

Seriously, the Sen is a cry baby. I felt that I was well informed. Those propositions would have brought us closer to voting in a 3rd world country. Both parties spend money the same way. Stop!!