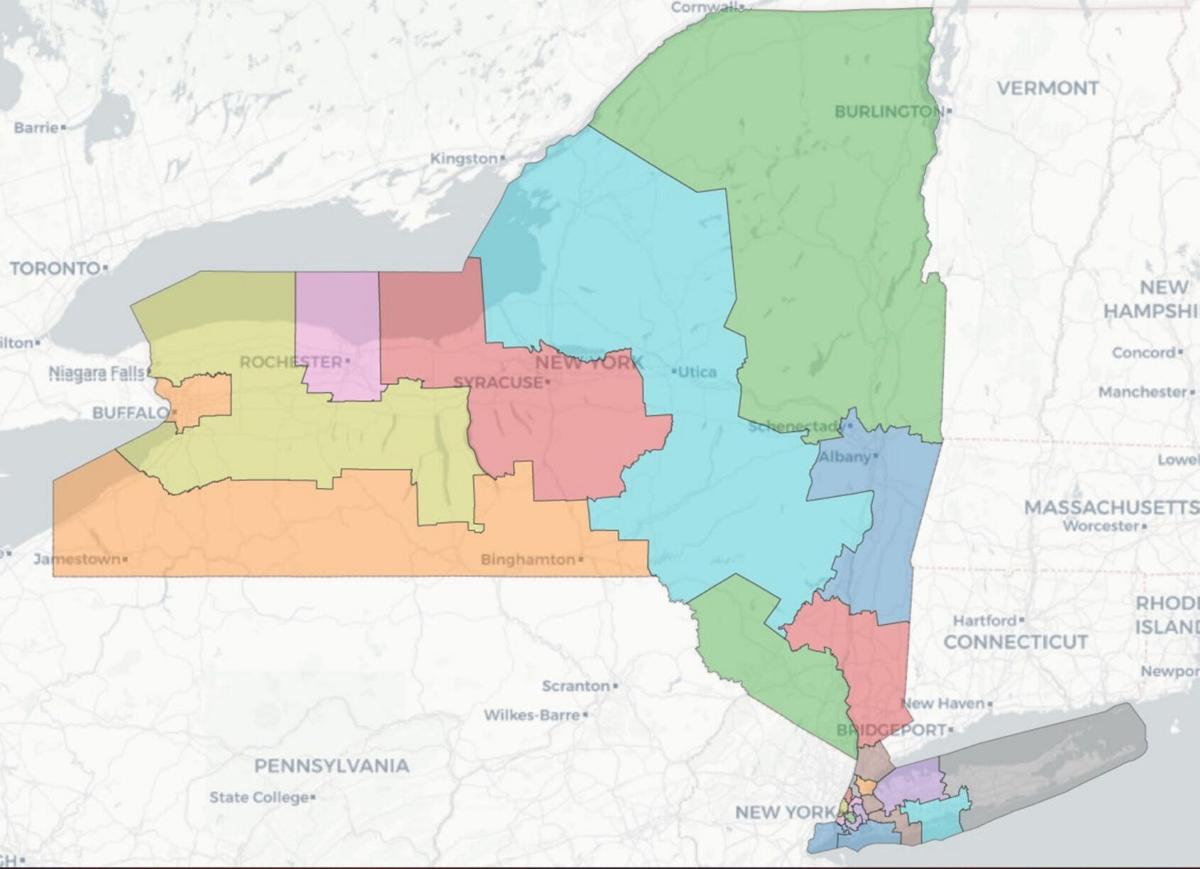 A statewide view of the “Names” proposal unveiled by the New York State Independent Redistricting Commission on Wednesday. Contributed photo 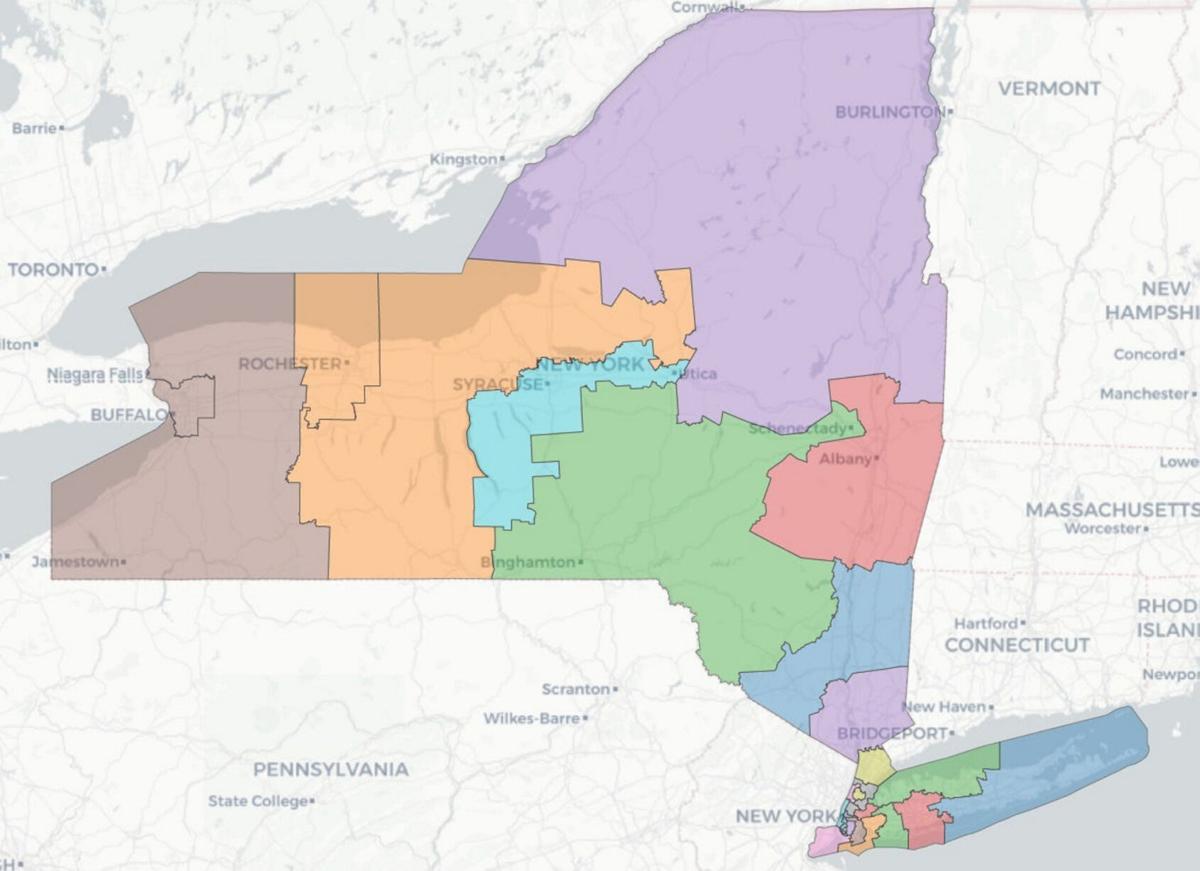 A statewide view of the “Letters” proposal unveiled by the New York State Independent Redistricting Commission on Wednesday. Contributed photo

A statewide view of the “Names” proposal unveiled by the New York State Independent Redistricting Commission on Wednesday. Contributed photo

A statewide view of the “Letters” proposal unveiled by the New York State Independent Redistricting Commission on Wednesday. Contributed photo

Competing election maps to take effect in 2022 released this week duel on another front besides boundary placement: The set that benefits Republicans contains readjusted prison data mandated under state law while Democrats, citing timing issues, did not include the required information in their drafts.

New York is one of 10 states to count incarcerated people in their home districts in the decennial U.S. census because of a 2010 law that ended prison gerrymandering. The majority of Republicans were against the 2010 chapter law.

After a brief dispute Friday, the state Legislative Task Force on Demographic Research and Reapportionment voted 4-1 to adopt the readjusted prison data that must be included in the new election district maps.

LATFOR technicians counted about 91.8% of the state’s incarcerated population as of spring 2020 — or about 39,000 people at the time — at their home addresses.

LATFOR’s technicians published the data on its website — the first time commissioners had access to the information. The commission was required to release its draft maps Wednesday.

Commissioners who worked on the Republican set of maps reworked the drafts for hours Tuesday night to include the required prison data, Commission Vice Chairman Jack Martins said.

The Democratic draft maps do not include the required prison data at this time, Redistricting Commission Chairman and Democratic appointee Dave Imamura said.

“We’ll include that with the full recalculation,” Imamura said Friday.

The commission will release its final plans to the Legislature by Jan. 1, and will hold 12 public hearings in cities across New York for residents to critique the plans throughout October and November. The hearings are required in the state Constitution.

The North Country’s public hearing will begin at 4 p.m. Oct. 27 at SUNY Plattsburgh in the E. Glenn Glitz Auditorium.

Another will be held in Albany starting 4 p.m. Nov. 1 at Page Hall on SUNY Albany’s downtown campus.

Imamura has said the Democrats did not factor in the homes of New York’s 27 current House members when drafting their initial proposal, leaning on commissioners’ three months of work ahead of them to reform the maps.

Both sets of draft maps can be downloaded and viewed at nyirc.gov, the redistricting commission’s website.

Martins, a Republican appointee, blasted Democrats for releasing draft maps without the required prison data, for presenting incomplete and therefore, illegal, plans to commission or the public for input.

“You’re required to have the incarcerated people into this map,” Martins said. “Our maps were all going to be illegal if we didn’t have that. The data is in the Republican maps.

“A number of people said these documents are drafts, and they said that somehow to imply that by being a draft, they can be inaccurate, they can be sloppy, they can be illegal or corrected later on,” Martins continued. “People should have the benefit of a properly prepared map — we all were working under severe time constraints.”

The COVID-19 pandemic and court decisions about privacy concerns significantly delayed the Census process. User-friendly granular census block data typically released in the spring was not available until August.

“We can’t do our adjustment until we have the data to work with,” Ruiz said during the task force meeting.

The commission requested the prison data in August after it was sent to the task force.

Martins criticized officials for not releasing the data sooner and having to wait on LATFOR’s analysis to be adopted this week — issues he argued were avoidable if state officials did not delay funding the commission millions of dollars for several months through 2020.

“I still don’t know why the data didn’t go directly to the commission,” Martins said Friday. “We didn’t ask for their interpretation of the data. We asked for the data itself.”

The state Department of Corrections and Community Supervision sent LATFOR its prison census data in August, including detailed information about each incarcerated person, including where they are housed, their date of birth, previous addresses, address of arrest and addresses of close relatives.

“The department also provided additional data to the Legislative Task Force regarding the incarcerated population as of April 1, 2020,” DOCCS spokesman Thomas Mailey said in a statement Friday. “Our understanding is that the task force used that information to report individuals based on the county in which they would likely reside if they were not incarcerated, not the county in which they resided on April 1, 2020.”

LATFOR voted to accept its technicians analysis Friday after a brief back-and-forth about the U.S. Census Bureau’s methodology in counting populations in landmark areas, or residences such as prisons and university dormitories.

The bureau used a new system for the 2020 census that switched people in and out of census blocks to make it impossible to hack into personal data. The process, and a discrepancy between the state Department of Corrections and Community Supervision’s and Census Bureau’s prison data, created a confusing negative population count in some instances.

“Since most individuals at Wyoming Correctional Facility were not originally from Wyoming County, they were not included in their count, which explains the discrepancy in figures,” Mailey said.

Mailey referred other inquiries to the task force.

Task force staff contacted the Census Bureau to fix the confusing count, but census workers said they could not assist, citing laws protecting confidentiality. Protecting the privacy of census respondents is bound under federal law.

“...As good technicians we are very meticulous and we document these things, but we really can’t do anything,” Isaac Fefer, LATFOR’s senior demographer said at Friday’s meeting. “We don’t have responsiveness from the Census Bureau or from DOCCS, so therefore, [we] take the data as a given. We have been faithful to the law.”

Ruiz also noted the Ray Brook federal correctional facility in Essex County’s a negative count. Other facilities that had negative numbers listed for its population were in the red by a few people, which is expected as facility populations fluctuate day to day.

“Advocates have proposed for a number of years that the U.S. Census Bureau work with state agencies to directly track prison populations and propose reallocation data as part of the release of the census,” said Mike Murphy, spokesman for Democrats in the Senate majority. “Until that occurs, the process in state law generated as accurate a data set as possible. The negative discrepancies do not create inaccurate data at the precinct level, just at the sub-track block level. But if federal authorities decided to change the relevant federal law and procedure, the Census Bureau could work with state partners to produce more accurate data.”

DOCCS’ prison data is the most accurate with the most up-to-date census facility data, Murphy said.

“In practice the data of correctional facilities is fully accurate at the precinct level, and higher up at the town and county level, but there is some inaccuracy that is being statistically factored into the analysis for the block level data,” Murphy said Friday. “In the case of the Wyoming facility ... we took the full population out of the block where the prison is located, but the blocks next to the prison are reporting higher populations that were not offset due to the privacy differential process. At the precinct level, the population reduction is fully appropriate and does not lead to a negative number.”

The state had 31,873 incarcerated people as of Friday — a total reduction in excess of 12,200 people since Jan. 1, 2020, and the lowest total incarcerated population in New York prisons since 1984. Today’s number of incarcerated New Yorkers reflects a 56% decline in population since the department’s high of 72,773 in 1999, Mailey said.

Assemblymember Philip Palmesano, R-Corning, was the sole task force member to vote against accepting the data Friday, citing confusing issues with the numbers and the method created in the 2010 law. Palmesano expressed concern the -938 people reduced the town of Attica’s population by more than 16% in the census count and harmed that locality’s representation.

The negative numbers will not have an effect on state-level redistricting, Murphy said Friday, because the state Constitution bars subdividing towns within census blocks.

The commission must adopt final plans for the state’s 26 seats in the U.S. House of Representatives, 63 senators and 150 assemblymembers to submit to the Legislature by Jan. 1.

The 2014 constitutional amendment that reformed the state’s redistricting process and created the 10-member Independent Redistricting Commission did not address how commissioners must accommodate the law mandating incarcerated people be reallocated to their permanent home address.

Previously, incarcerated people were counted in their prison’s district, helping to increase the population in those communities.

Commissioners must consider how to reallocate the state’s incarcerated population within congressional districts. The 2010 law did not reallocate prisoners for congressional redistricting purposes because of legal concerns, according to the New York Law School’s Center for New York City Law.

LATFOR staff had nearly nine months to analyze the data for the 2012 maps and readjusted 78% of the state’s incarcerated population last decade. Tens of thousands more people were held in state facilities at that time.

Imamura thanked the task force’s technical staff for successfully geocoding nearly 92% of the addresses of incarcerated New Yorkers in one month.

Imamaura and Martins both encouraged the public to stay informed as the process continued and attend the public hearings or submit comments about communities of interest that should be kept together at nyirc.gov.